Dust Control at the Oceano Dunes 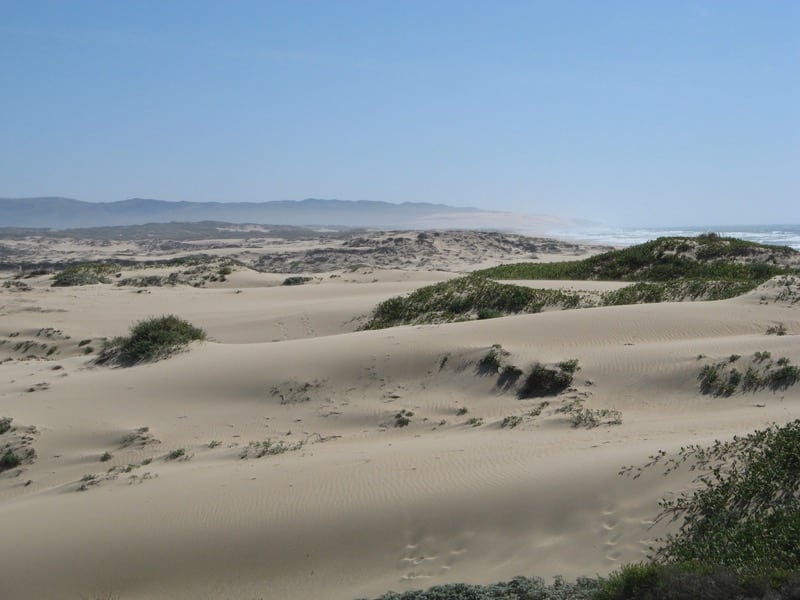 Last May, DRI scientist Jack Gillies, Ph.D. spent three weeks at the Oceano Dunes State Vehicular Recreation Area (SVRA), a 3,500-acre area of sandy beach and coastal dune habitat located within the Guadalupe-Nipomo Dunes complex on the central California coast. Unlike most visitors to this popular park, Gillies was not there to camp, or to ride OHVs over the miles and miles of beaches and dunes; he was there to measure the dust.

For more than 100 years, people have visited the Oceano Dunes region to drive on the beaches – beginning in the early 1900s with horse-drawn carriages and early automobiles, then later with ATVs, dune buggies, dirt bikes, trucks, RVs, and other types of vehicles. All of this activity, however, has not been without impact: Dust emitted by the dunes routinely blows toward the nearby Nipomo Mesa area, violating air quality standards for particulate matter and posing a public health threat to residents.

Last year, the Oceano Dunes SVRA was issued an Order of Abatement, which requires the development and implementation of a management plan to bring the park’s dust emissions back into compliance with State and Federal air quality standards within four years. Now, with new funding from the California State Parks Off-Highway Vehicle Division, Gillies and several other DRI researchers – Vic Etyemezian, Ph.D., George Nikolich, and John Mejia, Ph.D.—are continuing a long-term effort to help park officials understand and manage dust emissions from the Oceano Dunes. But in order to stop the dust, it would help to know how it forms, and this is still a bit of a mystery. 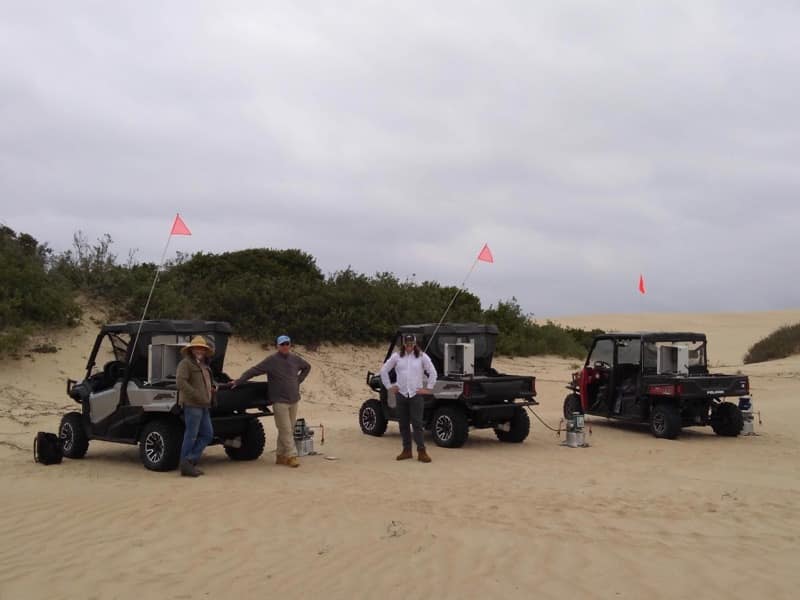 The source of the problem

“Dunes are always sandy, but they aren’t normally dusty; at least not to this extent,” said Gillies, who has worked at the Oceano Dunes since 2010. “Part of our research is to actually come up with the scientific reasons why the dunes are so dusty.”

Neither the park nor the town has long-term air quality data to show what conditions were like prior to the presence of vehicles, says Gillies, but there is evidence that suggests that the presence of the vehicles exacerbates the problem. Gillies and Etyemezian hypothesize that the dust emitted under elevated wind speeds could be a result of the re-working of the dunes by the vehicles and re-shaping of the dunes by coastal winds.

Researchers do know that dust is released from the dunes through a natural process called saltation, in which wind-blown sand particles bounce along the surface of the dune, kicking up smaller particles of dust – and that holding the sand in place helps to prevent that dust from being released.

“When the wind blows the sand across the dune surface, it’s like all these little missiles of sand coming in,” Gillies explained. “That’s what kicks out the dust, and then the dust is dispersed by the wind.”

Tools of the trade

To help park officials identify major sources of dust, Gillies and his DRI colleagues are engaged in an effort to map out specific areas of the park where dust originates. This spring, they collected more than 500 dust emissions measurements in a grid pattern through the OHV recreation area using a tool called the PI-SWERL (Portable In-Situ Wind Erosion Lab).

“The last time we did such an extensive measurement of dust emissions at the Oceano Dunes was in 2013, so it was decided that we should go back this year to update the underlying emission grid and see if, or how much, it has changed,” Gillies said. 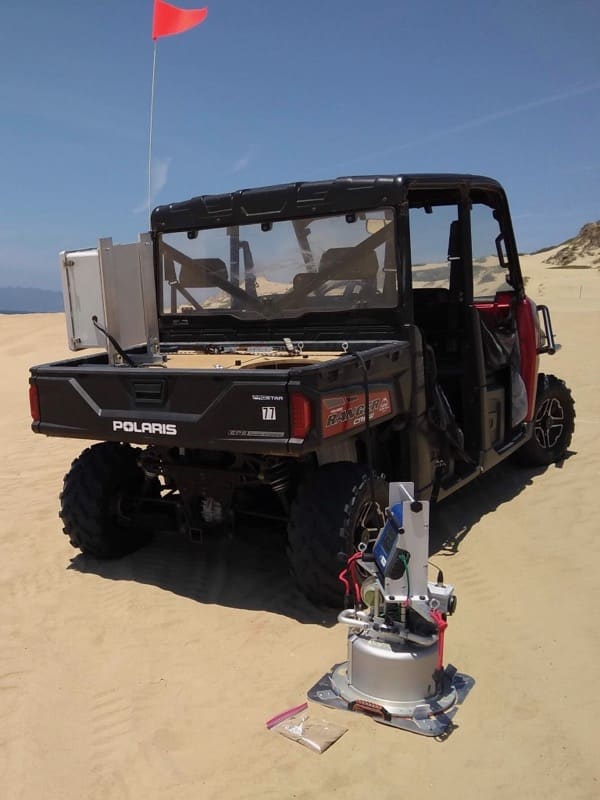 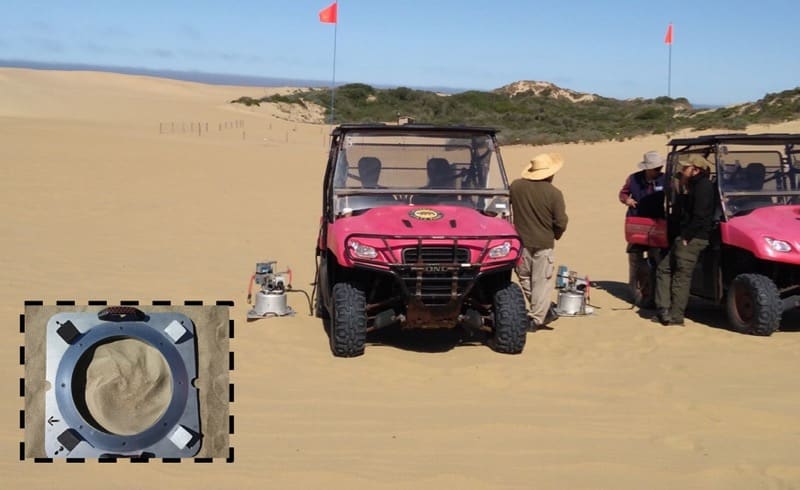 The PI-SWERL at Oceano Dunes. A flat blade several cm above the surface in PI-SWERL rotates creating a shear stress like the wind created when it blows across a surface, causes the sand to saltate and the dust is emitted. The inset shows the sand surface after a test. PI-SWERL sits on the metal frame to provide a stable surface for testing. Credit: Jack Gillies/DRI.

The PI-SWERL, which was developed at DRI by Etyemezian and Nikolich, measures the potential for dust emissions from real-world surfaces. It acts as a miniature wind tunnel to simulate the high winds that produce dust storms. The dust emissions measurements are fed into a computer model, developed in part by DRI’s John Mejia, which simulates the action of coastal winds and the subsequent dispersal of dust. Using this model, the team can help park officials identify “hot-spot” areas where dust originates, and target those areas for remediation.

The team has also installed a network of air quality monitors throughout the park, which monitor wind speed, wind direction, relative humidity, and particulate matter. These data are adding to their overall understanding of the spatial variability and strength of the dust emissions at the dunes.

“These data will help us answer questions like whether dust emissions levels are different on weekdays versus weekends, when human activity in the park is higher,” Gillies explained. “It will also allow us to see how things are changing over time.” 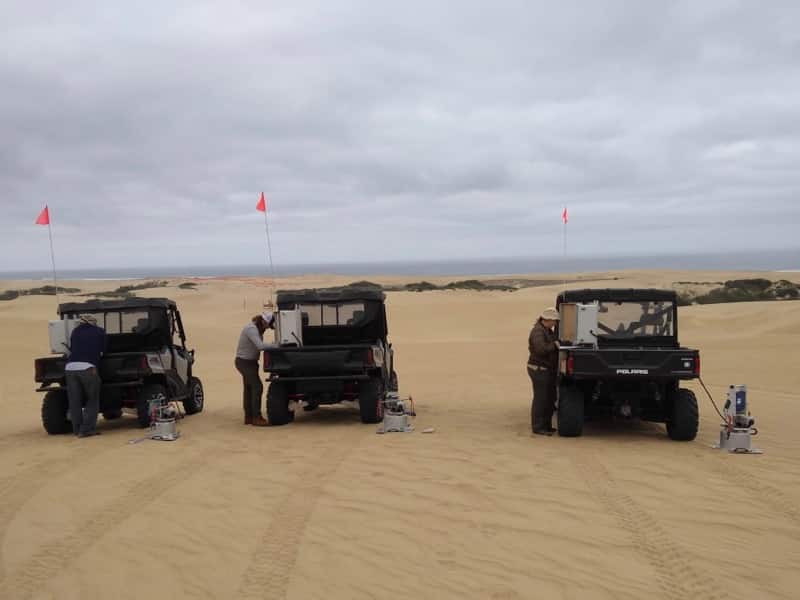 As the DRI team works to answer underlying scientific questions about the Park’s dust problem, they are also engaged in efforts to help develop and monitor solutions. They are working with Park officials on various dust control strategies, such as the use of temporary sand fencing, and revegetation with native plants to help hold sand in place and trap moving sand.

“Our aim is to stop the sand from moving, because when you stop the sand moving, you essentially stop the dust from being emitted,” Gillies said.

They are guiding the creation of “vegetation islands” of native plants, similar to that which are found in undisturbed dune areas to the north and south of the SVRA. OHVs are excluded from these areas, as well as from large sections of the park where endangered California least terns and threatened Western snowy plovers breed and nest during spring and summer.

As new dust control measures are added, the team monitors the remediation sites to see if dust emissions levels are reduced. The goal, Gillies says, is to help the park develop a management plan that will bring them into attainment with the Federal air quality standard for particulate matter within four years.

“The park has been ordered to find a solution to this problem, and it’s a problem that has raised a lot of contention among people of the region,” Gillies said. ”There are a lot of people who enjoy OHV recreation at the dunes and their visits contribute to the local economy, and another contingent of people who live downwind of the park and really want to breathe clean air. So, it is an interesting project to work on, both from a scientific perspective and as a project that deals with real-world problems.” 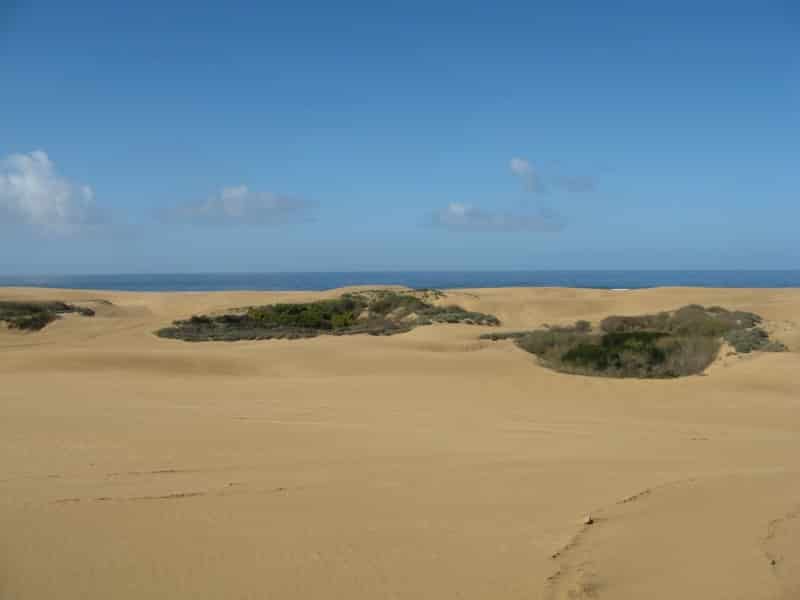 At the Oceano Dunes SVRA, native “vegetation islands” are being restored to help reduce dust emissions from the dunes. Credit: Jack Gillies/DRI.

About Jack Gillies: Jack Gillies, Ph.D. is a Research Professor of Geography with DRI’s Division of Atmospheric Sciences. Jack specializes in the physics of sediment transport by wind, and applies this knowledge to solve problems related to air quality. He grew up in Ontario, Canada, and holds bachelors, master’s and doctoral degrees in physical geography from the University of Guelph, Ontario. Jack began his career at DRI as a post-doctoral researcher in 1994, and has been a member of the DRI community for 25 years. To learn more about Gillies and his research, please visit: https://www.dri.edu/directory/5427-jack-gillies