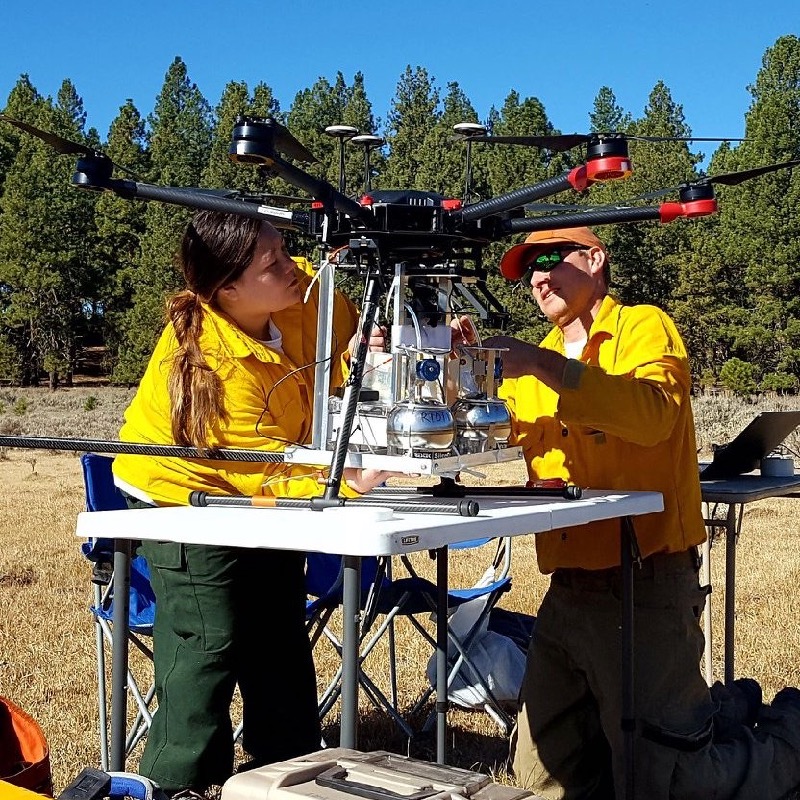 Visit DRI’s Northern Nevada campus on a clear afternoon, and you may hear a near-deafening buzzing. A massive swarm of bees? Thankfully, no—it’s an unmanned aircraft system (UAS), or drone, being flown by researchers from DRI’s Airborne Systems Testing and Environmental Research (ASTER) laboratory.

Adam Watts, Ph.D., associate research professor of fire ecology and director of the ASTER lab, has worked over the last several years to apply UAS technology in a variety of research projects in dangerous or hard-to-access environments. Perhaps most notably, Watts led a 32-mile UAS flight at 1,500 feet above ground, the longest commercial UAS flight in American aviation history, in 2017. This historic flight was part of a larger effort to determine the feasibility of routinely using UAS for aerial cloud-seeding operations, which until recently have required pilots to fly in dangerous winter storm conditions. (You can read a full write up on the project in Popular Science.) 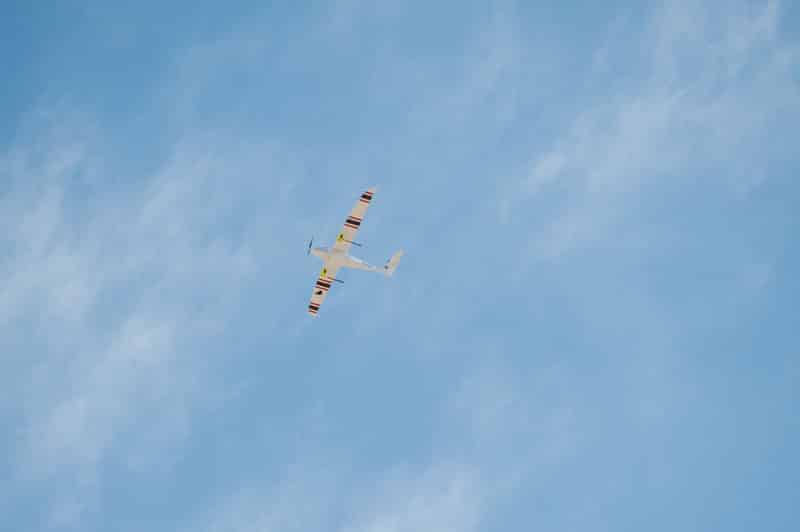 Drone America’s Savant sUAS flies with cloud seeding flares at the Hawthorne Industrial Airport in Hawthorne, Nev. on Friday, April 29, 2016. The test was successful by igniting the silver-iodide flares at 400 feet and flying for approximately 18 minutes. Photo by Kevin Clifford/Drone America.

More recently, Watts and his team in the ASTER lab have been working in entirely different environmental conditions: above prescribed burns.

“One of the big questions in land management, and in public health, is how smoke from prescribed fires versus wildfires differ, and what the effects are,” said Watts. His team is looking to UAS technology to explore this question and learn more about the differences between prescribed fire emissions and those from wildfire.

Earlier this year, postdoctoral researcher and fire ecologist Kellen Nelson, Ph.D., led the development of an innovative air sampling payload—a set of sensors and sampling equipment installed aboard the UAS—used to collect samples of wildland fire smoke. Traditionally, smoke has been collected by researchers from the air thousands of feet above the fire, or from a safe position on the ground far from the center of the smoke plume. Using a UAS, the research team has the unprecedented ability to collect samples directly from plumes and to move with a fire as its behavior changes, taking real-time measurements of CO2, CO, particulate matter, temperature, humidity, and pressure. 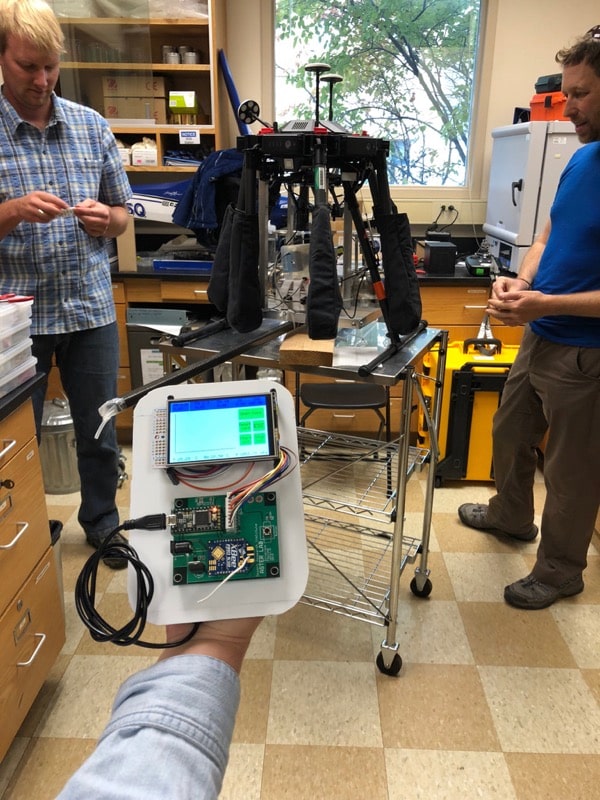 Jayne Boehmler holds up the data logger she designed to track real-time air quality measurements and remotely open the sampling canisters aboard the UAS. Kellen Nelson (left) and Adam Watts prepare the UAS (center) for flight in the background. October 2018.

“By collecting air samples, we’ll be able to test for trace gases and other constituents that we don’t have sensors to measure in real-time,” explained Nelson.

To do this work, the ASTER lab team has worked collaboratively with the researchers in DRI’s Organic Analytical Laboratory (OAL), a group that’s conducted ground-breaking air quality research over the last several years, including work to better understand the compounds present in e-cigarette emissions. The OAL provided sampling canisters to be installed on the UAS that are evacuated of all their contents. While in flight, the canisters are opened remotely to suck in the surrounding air, all using a handheld touchscreen controller developed by the team’s research physicist, Jayne Boehmler. Once the UAS is back on ground, the canisters are removed and returned to the OAL for analysis. Researchers hope these air quality data will improve understanding of smoke emissions from different fuel types.

“Smoke is really ephemeral,” explained Watts. “You’ll have a smoke plume moving around, or a little column of smoke coming up from a patch of vegetation that’s burning. Our custom payload on an unmanned aircraft is a powerful tool to make targeted measurements.” 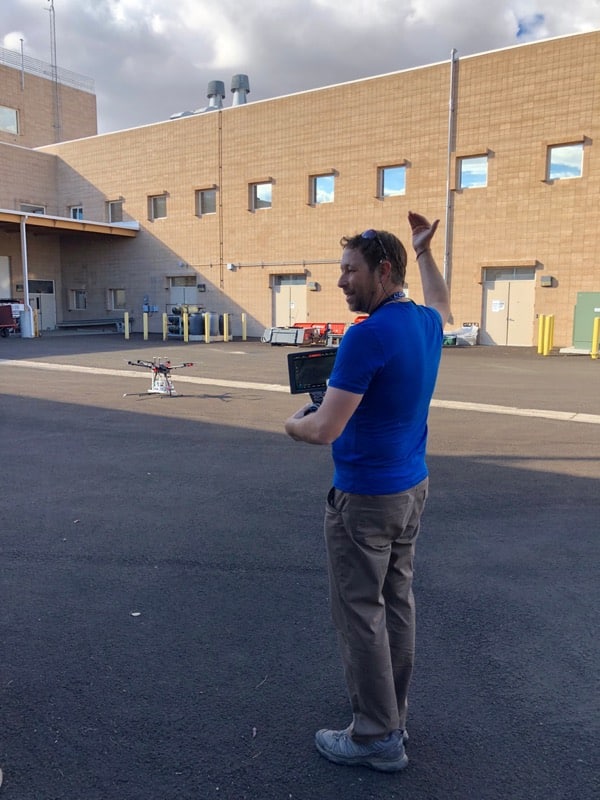 Adam Watts explains how he’ll pilot the UAS for the test on DRI’s Northern Nevada Campus on October 11th, 2018.

Nelson and Watts successfully tested the payload at the Prescribed Fire Research Consortium’s research burn in Florida this spring and under laboratory conditions this fall. They’ve shown that the UAS can handle eight pounds of equipment with minimal vibration in flight and that the real-time data measurement is accurate. Going forward, Watts, Nelson, and Boehmler hope to test the payload in the field over live prescribed burns.

Last week, the team traveled to the Sycan Marsh Preserve, a Nature Conservancy property in southern Oregon, to test the UAS in the field with the Missoula Fire Lab and the Nature Conservancy. Unfavorable conditions prevented prescribed burns from happening on this trip, but the team has their sights set on getting the UAS back in the field soon.

Boehmler and Nelson work on the UAS at the Sycan Marsh Preserve in October 2018. Credit: Craig Bienz/The Nature Conservancy.

Watch the video to hear from Watts, Nelson, and Boehmler as they prepare for their trip to Oregon and learn more about UAS applications for wildland fire research.

To learn more about the range of UAS research happening at DRI, please visit: https://www.dri.edu/labs/aster/.