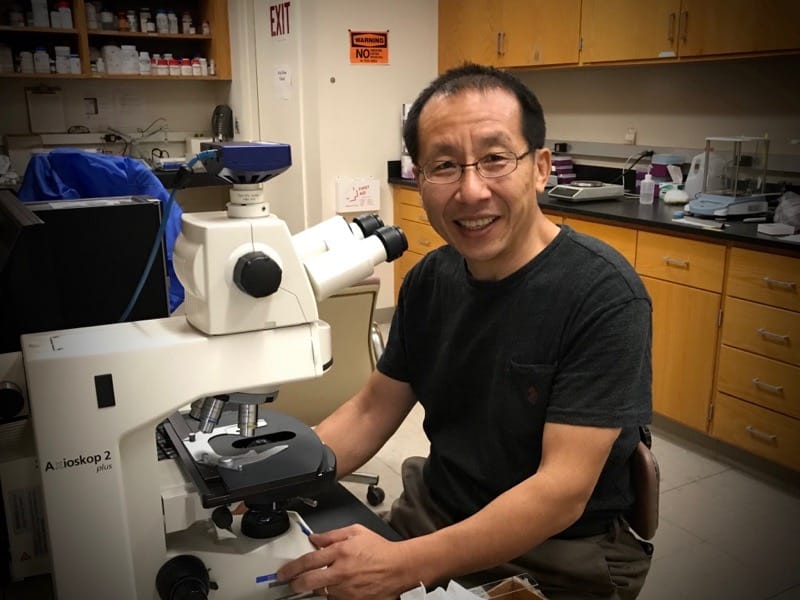 Henry Sun, Ph.D., is an associate research professor of microbiology with the Division of Earth and Ecosystem Sciences at the Desert Research Institute in Las Vegas. Henry specializes in the study of microscopic organisms that live in extreme environments, often using specimens from here on earth to learn about possibilities for life on Mars. He is originally from China and has a bachelor’s degree in botany and master’s degree in phycology (the study of algae) from Nanjing University. He also holds a Ph.D. in microbiology from Florida State University and completed a post-doc in astrobiology (the study of life in the universe) at the Jet Propulsion Lab in Pasadena, CA. Henry has been a member of the DRI community since 2004. In his free time, he enjoys playing pickup basketball with friends in Las Vegas, and spending time with his wife and two kids.

DRI: What do you do here at DRI?HS: I do quite a few things, all centered around the study of life in extreme environments – places that are in one way or another similar to Mars. We are studying what we call analog environments, trying to understand whether there’s life in these places that are comparable to Mars, learning how to go about detecting life and organisms, and developing ideas for reliable instruments that we can send to Mars to look for life there.

DRI: How did you become interested in this line of work?
HS: It started in graduate school, when I was given the opportunity to go to Antarctica, to a place called the Dry Valleys, to do my dissertation work. Until 1976, this was a place thought to be devoid of all life. But my former adviser, Imre Friedmann, extrapolating from his work in the hot deserts in the southwestern U.S., discovered thriving communities of microalgae and cyanobacteria in the pore spaces in the Antarctic sandstone. Sandstone is translucent, so sunlight can penetrate the first few millimeters. The stone holds onto water in the pore spaces so it doesn’t dry out right away. And that’s all you need to support life. I fell in love with these organisms on my very first trip there. 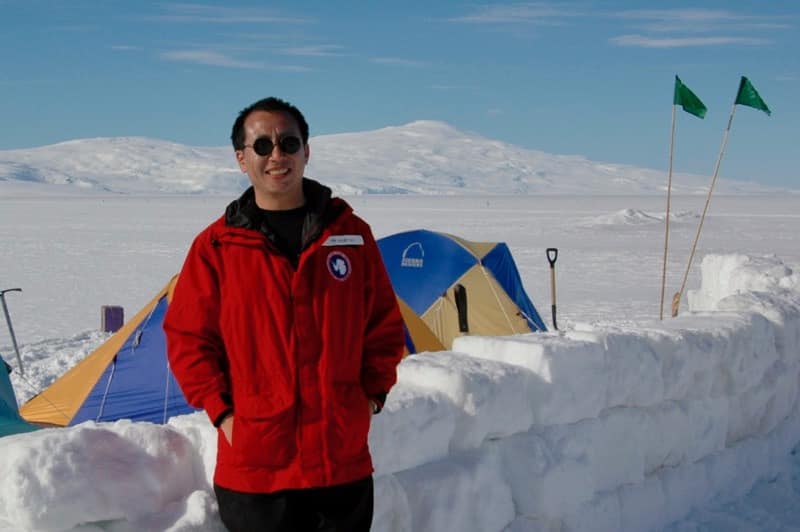 DRI: What did you learn from studying those organisms?
HS: Probably the most remarkable thing we have learned about these organisms is that they have a very slow growth rate. We have monitored a few rocks closely over the last 50 years and never saw any appreciable signs of growth. In fact, they are so long-lived that their age can be determined by radiocarbon decay. In other words, if you look at their radiocarbon content, you would think they are dead, fossilized organisms. But we know they are alive because as soon as we thaw them to a normal temperature they start to breathe, taking up carbon dioxide and releasing oxygen. And because they start to grow and reproduce when we put them in a petri dish and incubate at more favorable temperature conditions.

That said, we still have a lot to learn about these organisms, and the opportunity for a serious study presented itself this year. When my former advisor passed away in 2007, he left behind a large collection of thousands of rocks from Antarctica, amassed over his career, in a walk-in -30oC freezer at Florida State University in Tallahassee, Florida. Last year, Florida State decided to decommission that building, and the samples were about to be thrown out. This past June, with a little help from DRI and NASA, we raised some money and purchased three freezers. I drove to Florida and hauled all of the samples back in a cargo van full of coolers and dry ice. I moved the entire collection to Las Vegas without them ever being thawed, so now they are sitting at DRI waiting to be studied. 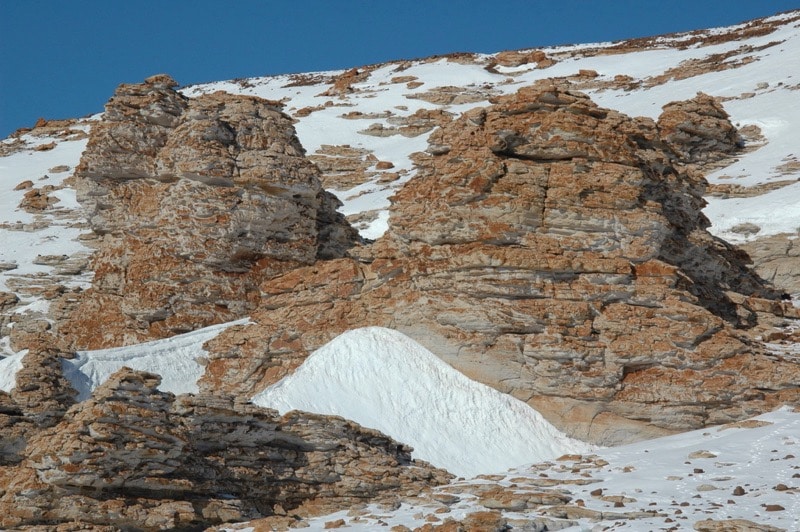 An outcrop of Antarctic sandstone at one of Henry Sun’s field sites.

DRI: What are you planning to do with these samples?
HS: Inside of the freezers, the samples are kept at temperatures of -30oC (-22oF) and in complete darkness, but the microbes are still alive. As I said, we have thousands of samples. Only two samples have been studied using modern-day DNA analysis. So, the first thing we want to is a comprehensive molecular study and find out what lives in these samples.

We are also working with colleagues at the NASA Ames Research Center to look for cyanobacteria that can grow not using the visible light, but using the infrared. Visible light, which photosynthetic organisms prefer, is filtered out by the sandstone. But the infrared is still present. It is not as good as the visible, but that is all the organisms at the bottom of the colonized zone have. We speculate that they may subsist on the infrared. 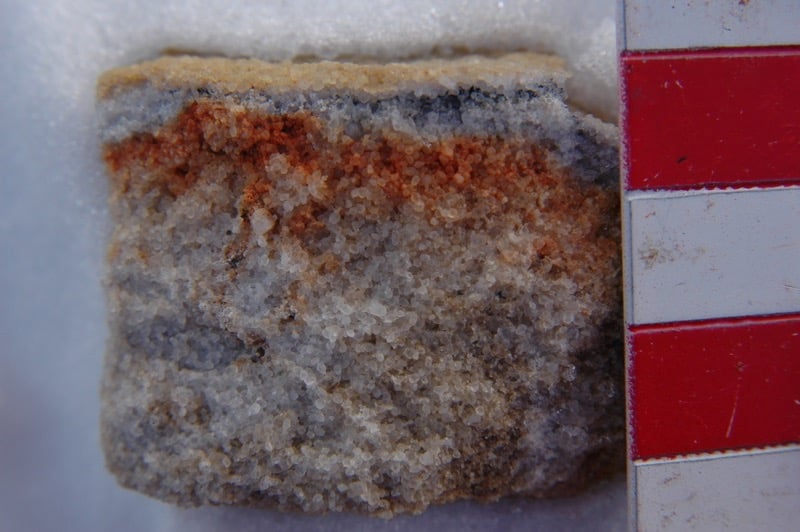 Closeup of one of Henry Sun’s Antarctic rock samples, home to unknown species of microorganisms.

DRI: What do you like best about what you do?
HS: I feel most rewarded when we engage school teachers and their students in what we do. We do this through a program called Spaceward Bound, which was created by Chris McKay, DRI’s Nevada Medalist from two years ago. The goal is to train the next generation of space explorers in remote but scientifically interesting places that are analogous to the moon or Mars. The reason why we need to start this now is because the first human mission to Mars may happen as early as the 2030s. The scientists who will go to Mars to study its environment are still in school today. We have done several Spaceward Bound expeditions in the Mojave and Death Valley area with teachers and students from Nevada. To me, there is no greater reward than to see children get inspired by the work we do so that one day they may become scientists themselves and continue to push back the frontier of knowledge. 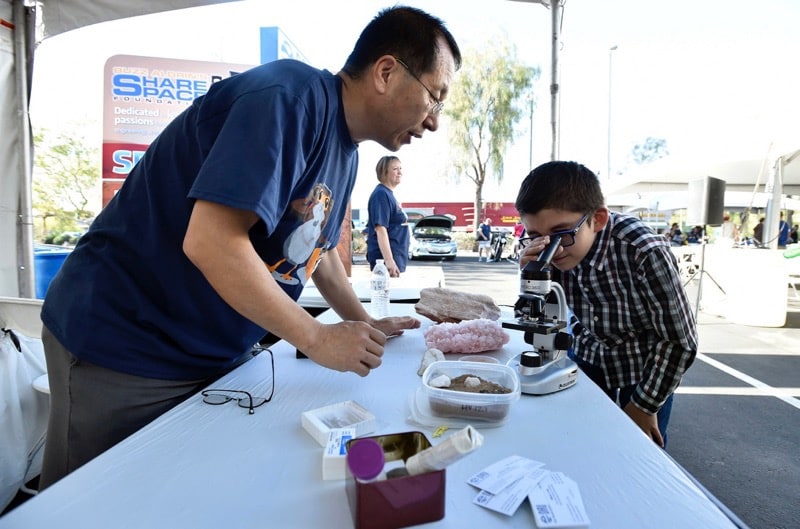 Henry Sun talks with a student at DRI’s 2018 ‘May Science Be With You’ event in Las Vegas.

For more information on Henry Sun and his research, continue to his research page: https://www.dri.edu/directory/4764-henry-sun