Above: A wide view of the Nuussuaq Peninsula in West Greenland. Project collaborators investigate an ice core extracted from this region for signs of change and response to past periods of warming.

Research suggests some ice caps grew during past periods of warming

Although a warming climate is leading to rapid melting of the ice caps and glaciers along Greenland’s coastline, ice caps in this region sometimes grew during past periods of warming, according to new research published today in Nature Geoscience. The study team included Joseph McConnell, Nathan Chellman, and Monica Arienzo of DRI, who analyzed a 140 m ice core from an ice cap on Greenland’s Nuussuaq Peninsula at DRI’s Ice Core Laboratory in Reno, Nevada.

“The use of records from Greenland’s coastal ice caps in climate change research has been hampered by difficulties in creating chronologies for ice-core measurements,” said McConnell. “Here we used a novel approach based on synchronizing detailed measurements of heavy metals in an array of Greenland ice cores.”

“This allowed creation of a tightly constrained chronology in a coastal core for the first time, and it was this chronology that underpinned this climate study,” Chellman added.

The analysis was done using DRI’s unique continuous ice core analytical system, which was developed in McConnell’s lab and funded by grants from the National Science Foundation during the past 15 years.

The full news release from Woods Hole Oceanographic Institution is below. 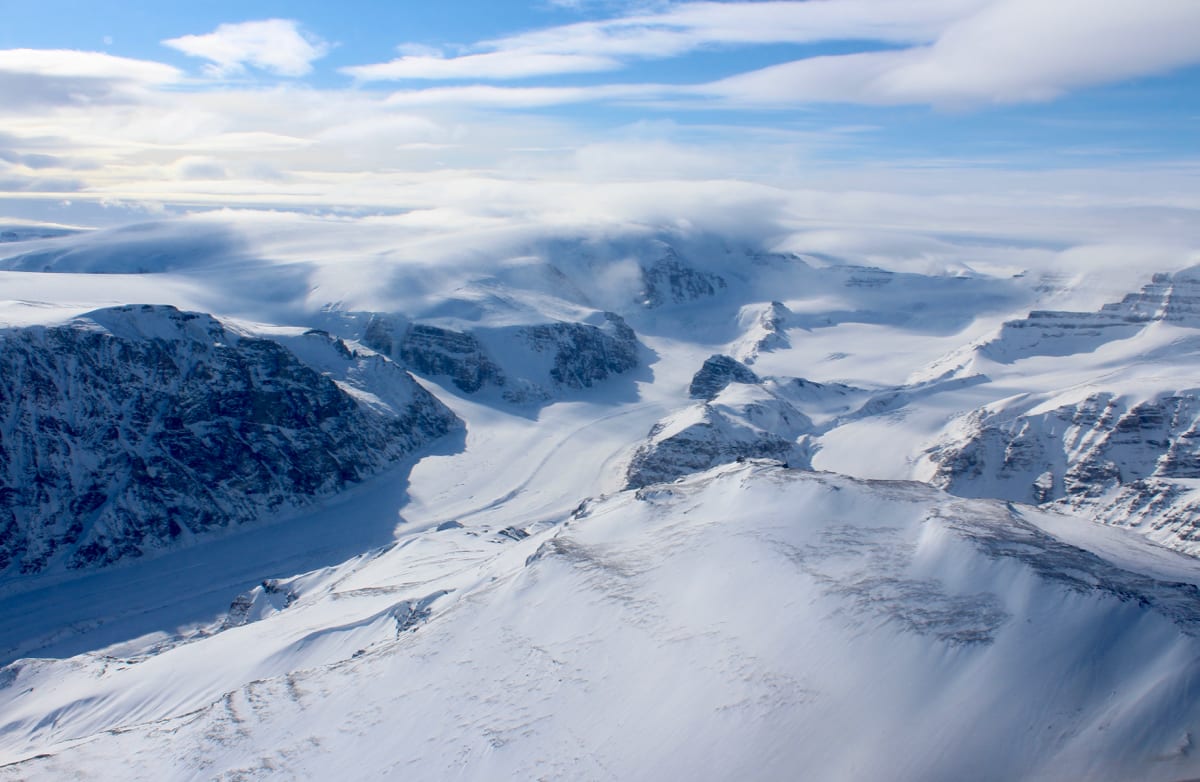 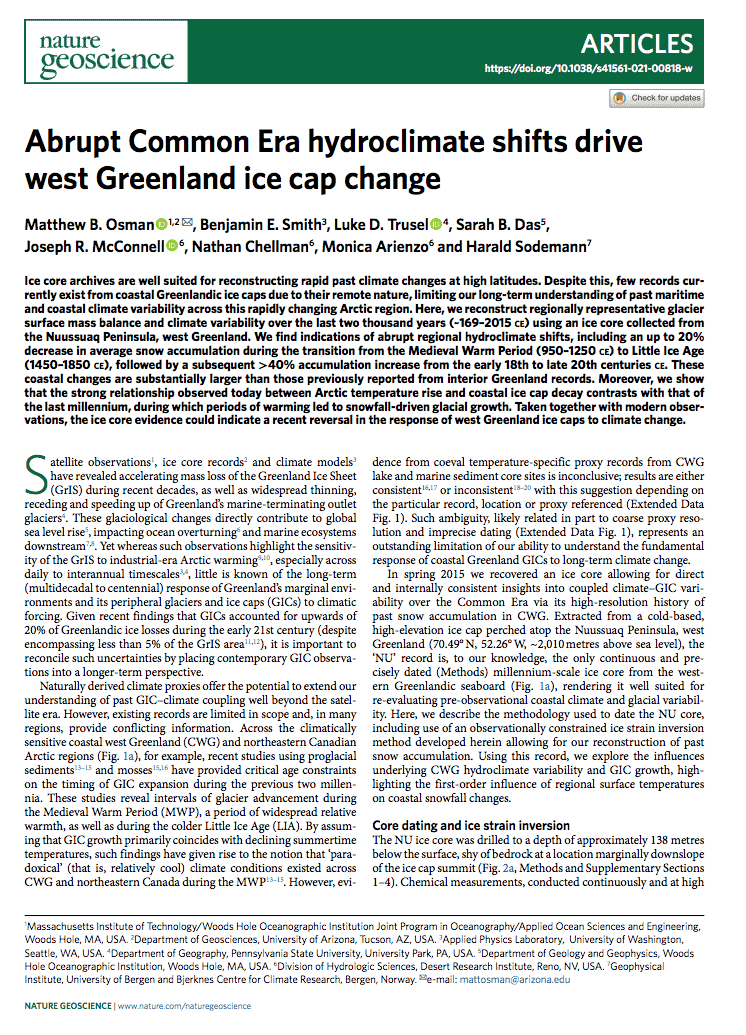 Woods Hole, Mass. (September 9, 2021) – Greenland may be best known for its enormous continental scale ice sheet that soars up to 3,000 meters above sea level, whose rapid melting is a leading contributor to global sea level rise. But surrounding this massive ice sheet, which covers 79% of the world’s largest island, is Greenland’s rugged coastline dotted with ice capped mountainous peaks. These peripheral glaciers and ice caps are now also undergoing severe melting due to anthropogenic (human-caused) warming.  However, climate warming and the loss of these ice caps may not have always gone hand-in-hand.

New collaborative research from the Woods Hole Oceanographic Institution and five partner institutions (University of Arizona, University of Washington, Pennsylvania State University, Desert Research Institute and University of Bergen), published today in Nature Geoscience, reveals that during past periods glaciers and ice caps in coastal west Greenland experienced climate conditions much different than the interior of Greenland. Over the past 2,000 years, these ice caps endured periods of warming during which they grew larger rather than shrinking.

This novel study breaks down the climate history displayed in a core taken from an ice cap off Greenland’s western coast. According to the study’s researchers, while ice core drilling has been ongoing in Greenland since the mid-20th century, coastal ice core studies remain extremely limited, and these new findings are providing a new perspective on climate change compared to what scientists previously understood by using ice cores from the interior portions of the Greenland ice sheet alone.

“Glaciers and ice caps are unique high-resolution repositories of Earth’s climate history, and ice core analysis allows scientists to examine how environmental changes – like shifts in precipitation patterns and global warming – affect rates of snowfall, melting, and in turn influence ice cap growth and retreat,” said Sarah Das, Associate Scientist of Geology and Geophysics at WHOI. “Looking at differences in climate change recorded across several ice core records allows us to compare and contrast the climate history and ice response across different regions of the Arctic.” However, during the course of this study, it also became clear that many of these coastal ice caps are now melting so substantially that these incredible archives are in great peril of disappearing forever. 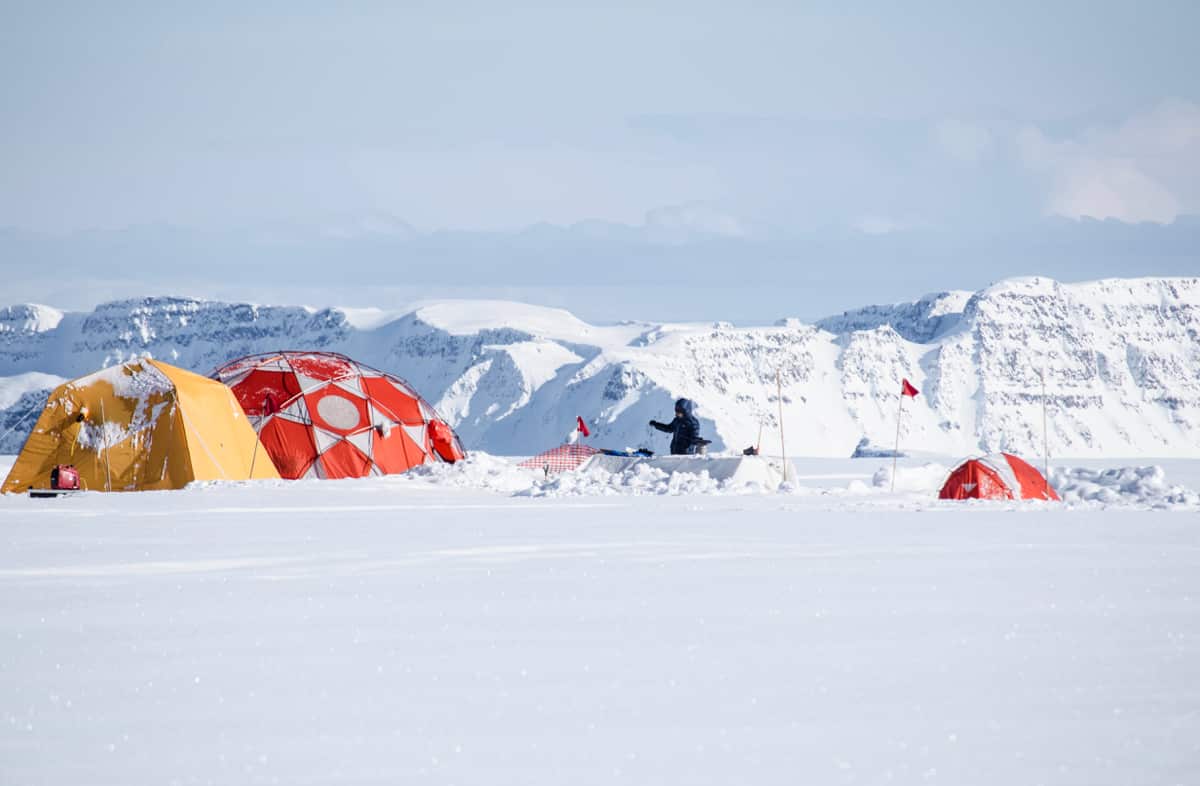 The research team on the ground of a coastal West Greenland ice cap, preparing to extract and examine ice cores.

Due to the challenging nature of studying and accessing these ice caps, this team was the first to do such work, centering their study, which began in 2015, around a core collected from the Nuussuaq Peninsula in Greenland. This single core offers insight into how coastal climate conditions and ice cap changes covaried during the last 2,000 years, due to tracked changes in its chemical composition and the amount of snowfall archived year after year in the core. Through their analysis, investigators found that during periods of past warming, ice caps were growing rather than melting, contradicting what we see in the present day.

“Currently, we know Greenland’s ice caps are melting due to warming, further contributing to sea level rise. But, we have yet to explore how these ice caps have changed in the past due to changes in climate,” said Matthew Osman, postdoctoral research associate at the University of Arizona and a 2019 graduate of the MIT-WHOI Joint program. “The findings of this study were a surprise because we see that there is an ongoing shift in the fundamental response of these ice caps to climate: today, they’re disappearing, but in the past, within small degrees of warming, they actually tended to grow.”

According to Das and Osman, this phenomenon happens because of a “tug-of-war” between what causes an ice cap to grow (increased precipitation) or recede (increased melting) during periods of warming. Today, scientists observe melting rates that are outpacing the rate of annual snowfall atop ice caps. However, in past centuries these ice caps would expand due to increased levels of precipitation brought about by warmer temperatures. The difference between the past and present is the severity of modern anthropogenic warming.

The team gathered this data by drilling through an ice cap on top of one of the higher peaks of the Nuussuaq Peninsula. The entire core, about 140 meters in length, took about a week to retrieve. They then brought the meter-long pieces of core to the National Science Foundation Ice Core Facility in Denver, Colorado, and stored at -20 degrees Celsius. The core pieces were then analyzed by their layers for melt features and trace chemistry at the Desert Research Institute in Reno, Nevada. By looking at different properties of the core’s chemical content, such as parts per billion of lead and sulfur, investigators were able to accurately date the core by combining these measurements with a model of past glacier flow.

“These model estimates of ice cap flow, coupled with the actual ages that we have from this high precision chemistry, help us outline changes in ice cap growth over time. This method provides a new way of understanding past ice cap changes and how that is correlated with climate,” said Das. “Because we’re collecting a climate record from the coast, we’re able to document for the first time that there were these large shifts in temperature, snowfall and melt over the last 2,000 years, showing much more variability than is observed in records from the interior of Greenland,” Das added.

“Our findings should urge researchers to return to these remaining ice caps and collect new climate records while they still exist,” added Osman. 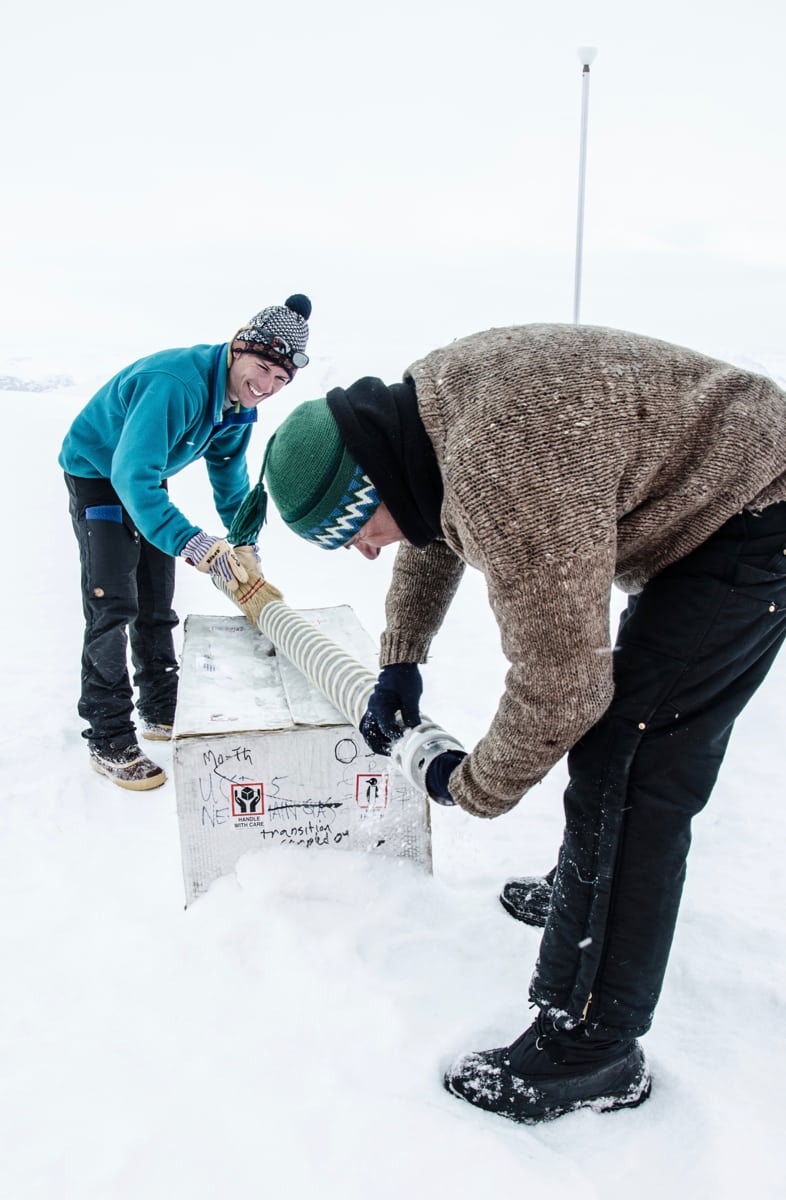 The research team on the ground of a coastal West Greenland ice cap, preparing to extract and examine ice cores.

This research is funded by the National Science Foundation (NSF), with further support from the U.S. Department of Defense National Defense Science and Engineering Graduate Fellowship; and an Ocean Outlook Fellowship to the Bjerknes Centre for Climate Research; the National Infrastructure for High Performance Computing and Data Storage in Norway; Norwegian Research Council; and Air Greenland.

The Woods Hole Oceanographic Institution (WHOI) is a private, non-profit organization on Cape Cod, Massachusetts, dedicated to marine research, engineering, and higher education. Established in 1930, its primary mission is to understand the ocean and its interaction with the Earth as a whole, and to communicate an understanding of the ocean’s role in the changing global environment. WHOI’s pioneering discoveries stem from an ideal combination of science and engineering—one that has made it one of the most trusted and technically advanced leaders in basic and applied ocean research and exploration anywhere. WHOI is known for its multidisciplinary approach, superior ship operations, and unparalleled deep-sea robotics capabilities. We play a leading role in ocean observation and operate the most extensive suite of data-gathering platforms in the world. Top scientists, engineers, and students collaborate on more than 800 concurrent projects worldwide—both above and below the waves—pushing the boundaries of knowledge and possibility. For more information, please visit www.whoi.edu