Vic Etyemezian, Ph.D., is the Interim Vice President of Research at the Desert Research Institute (DRI) and specializes in the study of dust emissions. Vic has been a member of the DRI community since 1999, when he started his career at DRI as a post-doctoral scientist with the Division of Atmospheric Sciences in Las Vegas. He recently published a paper in the International Journal of Environmental Research and Public Health titled “Valley Fever: Environmental Risk Factors and Exposure Pathways Deduced from Field Measurements in California,” working alongside colleagues Antje Lauer, Ph.D. (California State University Bakersfied), George Nikolich, M.S. (DRI), and others, so we connected with Vic to learn more about the project.

DRI: What is Valley Fever?

Etyemezian: Valley Fever is an infection that you can get from breathing in spores of a fungus called Coccidioides. In some people the infection is mild or flu-like, but in others, especially people who are immunocompromised, this fungus can cause a serious or even fatal infection. Valley Fever seems to occur primarily in the southwestern US, but it is also found in parts of Central and South America. The military has a record of people stationed at bases in the southwestern US getting sick from Valley Fever going all the way back to the 1940s, so it does seem to occur in and around the training lands that they use in the southwest. The military also has really good records, so it is likely broadly occurring in the arid southwest –  it’s just that they have great records in these places. 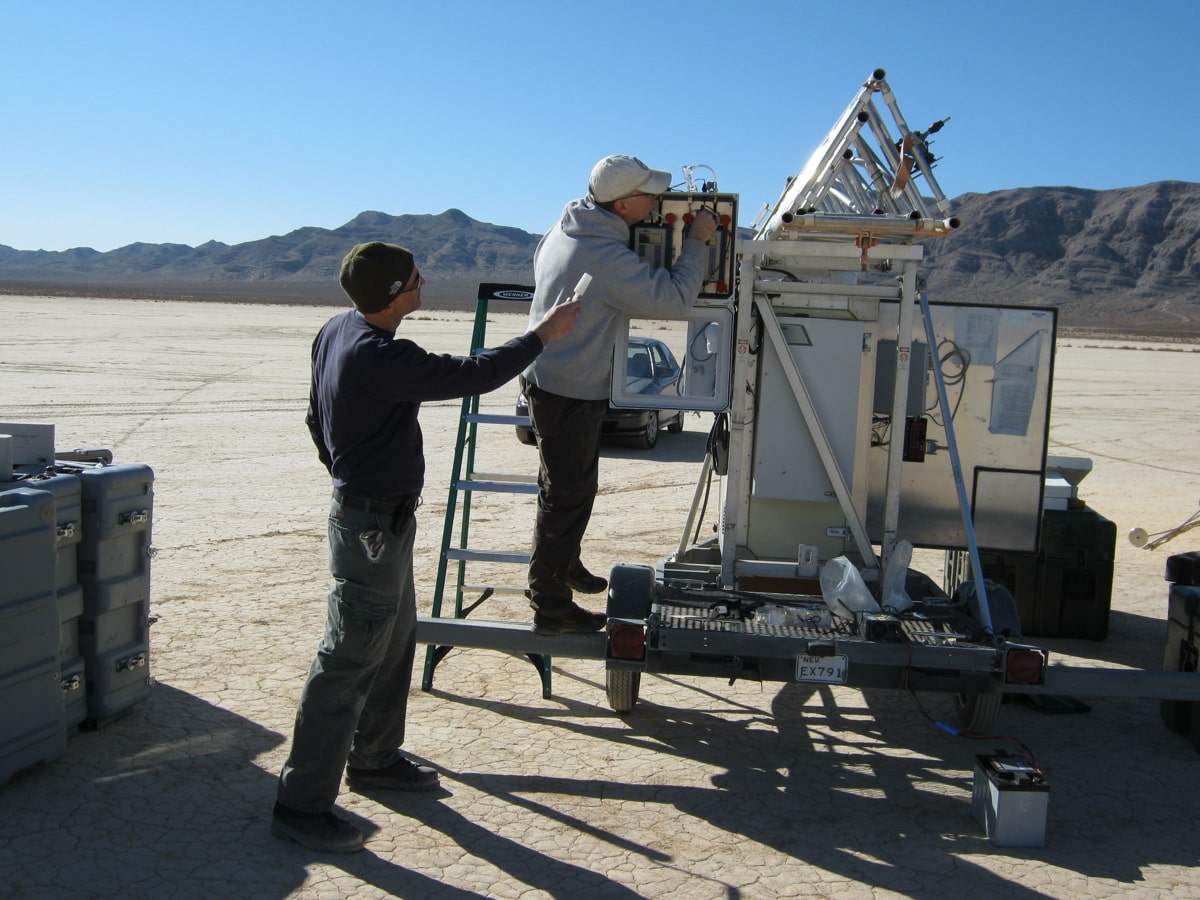 DRI: How did you originally become interested in studying this disease?

Etyemezian: Six or seven years ago, I was working on a DRI project at NASA’s Armstrong Flight Research Center in the Mojave Desert of southern California related to potential future impacts of climate change on capital infrastructure such as buildings and runways. My colleague, Dr. Antje Lauer from Cal State University Bakersfield, was there at the site working on a different project related to the potential influence of climate change on Valley Fever. Our own Dr. Lynn Fenstermaker (also working on the Armstrong project) and NASA’s now retired Dr. Tom Mace had the foresight to introduce Antje and me to one another and identify that we can leverage each other’s expertise. We got into a discussion of whether there was some overlap between her Valley Fever research and the dust research that George Nikolich and I do. We did a little pilot (exploratory) work together, and then put in a proposal to the DoD SERDP Program to do a project near several military facilities in the Southwest to see if we could say something about how Valley Fever might be changing with climate. 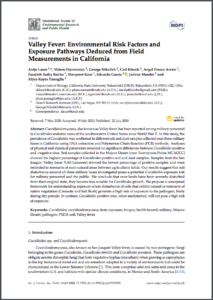 DRI: Tell us a little bit about the paper that you and your colleagues just published. What were your major research questions?

Etyemezian: In this study, we were trying to find out several things, and the paper that was led by my colleague, Dr. Lauer reported our preliminary findings. One, are there any environmental parameters that can help us identify whether or not this Coccidioides fungus will be present at a given site? Can we say that this fungus tends to be found in certain kinds of soils, or on certain slopes of hillsides, or on shaded hillsides, or in soils with a certain chemistry? If so, then we can look at some of these properties and try to identify areas that are fairly high risk for the fungus.

The second goal was to determine whether dust was a possible pathway by which people are getting exposed to this fungus. So, in areas where you find this fungus in the soil, can you also find it in the dust that comes off of the surface during high winds, or in the dust that gets stirred up when someone drives a vehicle along a dirt road? We hypothesized that this study may be of particular relevance for people in the military, because oftentimes they are working in very dusty conditions, especially during training exercises. Our study sites were located around three military bases in southern California, all of which have documented cases of Valley Fever throughout the years. 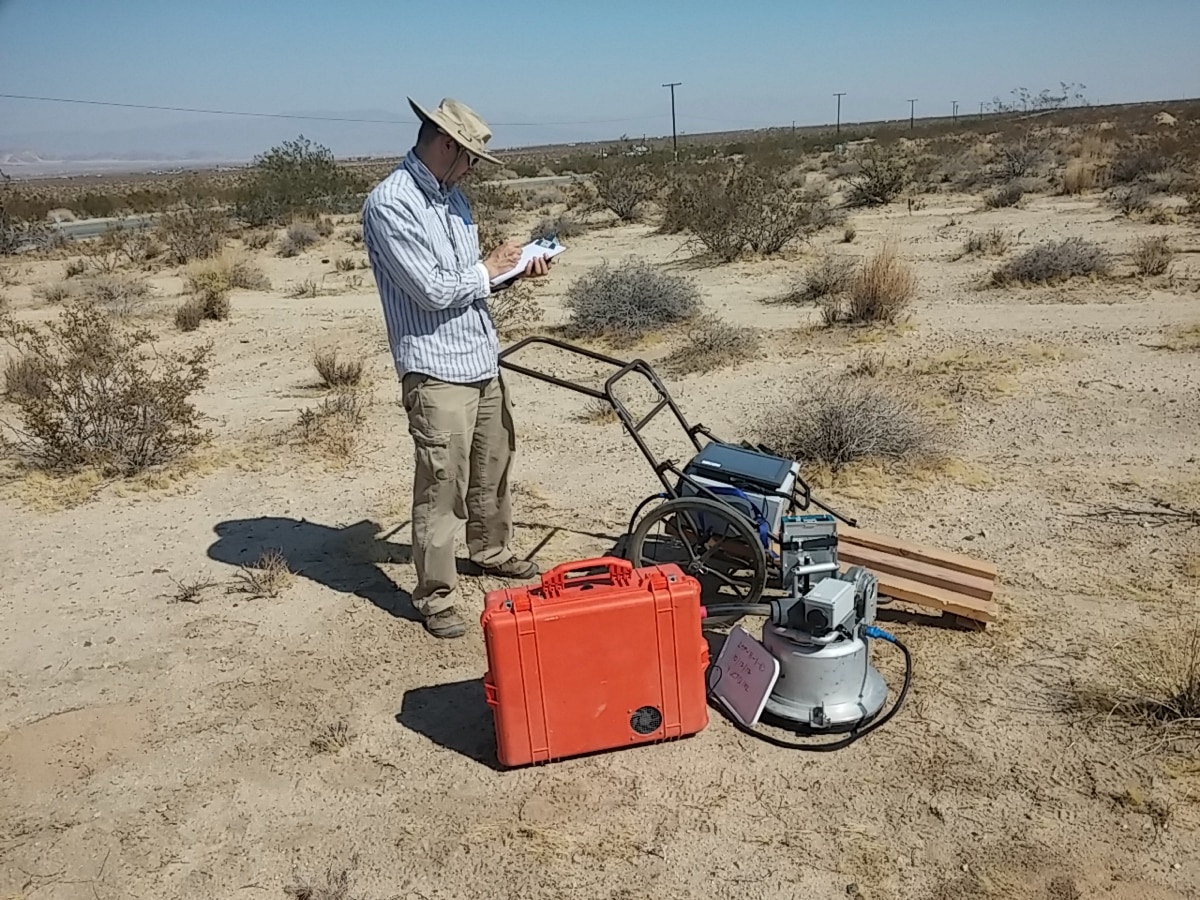 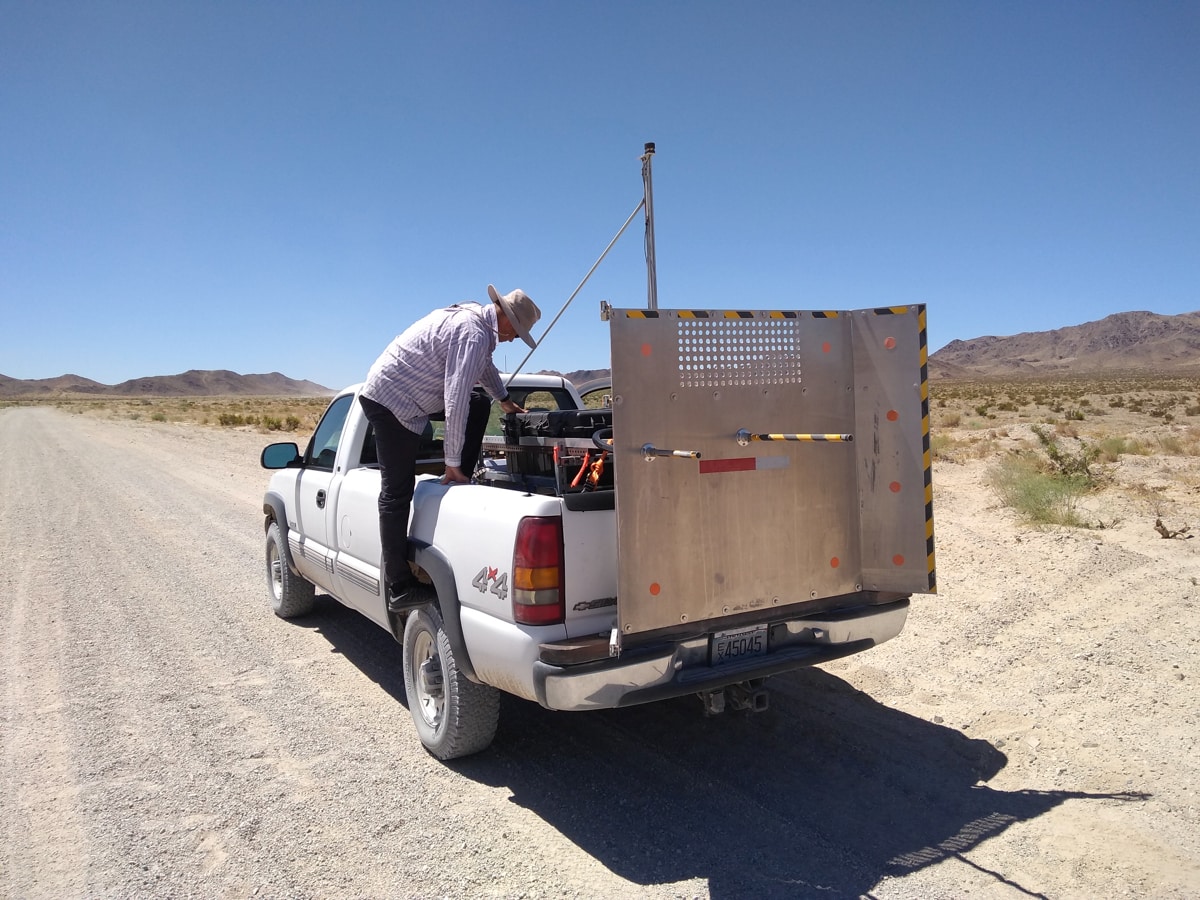 Above, left: George Nikolich (Division of Atmospheric Sciences, DRI) notes field conditions as he oversees a PI-SWERL test near Edwards Air Force Base in California. The orange case contains specialized instrumentation for collecting particles that are suspended by the PI-SWERL during its testing cycle. These are later analyzed for fungal DNA. Above, right: George Nikolich preparing the TRAKER instrument for measuring and collecting dust from unpaved roads near Twentynine Palms, California.

DRI: What was your/DRI’s role in this investigation?

Etyemezian: Our expertise mainly came in in the area of dust. We used an instrument called the PI-SWERL®, which was developed at DRI, on dozens of test surfaces to simulate high winds on that suspend  dust from the surface into the air. Then we collected that dust and gave it to our colleague, Dr. Lauer, for analysis to see if she could find DNA of the fungus. We also used another device that we developed at DRI called the TRAKER™, which is basically a heavily instrumented vehicle that you can drive on unpaved roads . As you drive on these dirt roads and suspend dust behind the vehicle, you can sample this material, and then subject it to analysis to see if there is genetic material from airborne Coccidiodes spores in that dust.

DRI: What were some of your findings?

Etyemezian: It’s important to emphasize that this was really kind of a pilot study. One of the things that was pretty clear from the study was that there are unfortunately no simple parameters you can look at in the soil to determine whether or not this fungus exists at a given location. It appears to be fairly widespread across the southwest. Another finding was that traveling in a vehicle on unpaved roads in these endemic areas is a plausible pathway for exposure, and farmers or military folks who live and train in these areas might get exposed to potentially high concentrations of infectious fungal material.

Overall, it seems that there are sort of two endpoints in the landscape. If you look at a natural desert landscape that hasn’t been disturbed in some time, you could find a lot of the Valley Fever pathogen in the actual soil, but the potential for the fungus to be suspended under normal windy conditions seems to be quite small. And if you look at an extremely disturbed landscape such as a farm, where you’ve completely changed the original ecosystem, it appears that there’s very little fungus or Valley Fever spores – maybe because people apply fungicide to the crops and are creating not a very hospitable environment. But it seems like there’s a period of time in between, when you’re transitioning from a natural landscape to an extremely anthropogenically impacted landscape, that’s probably when and where the exposure happens. 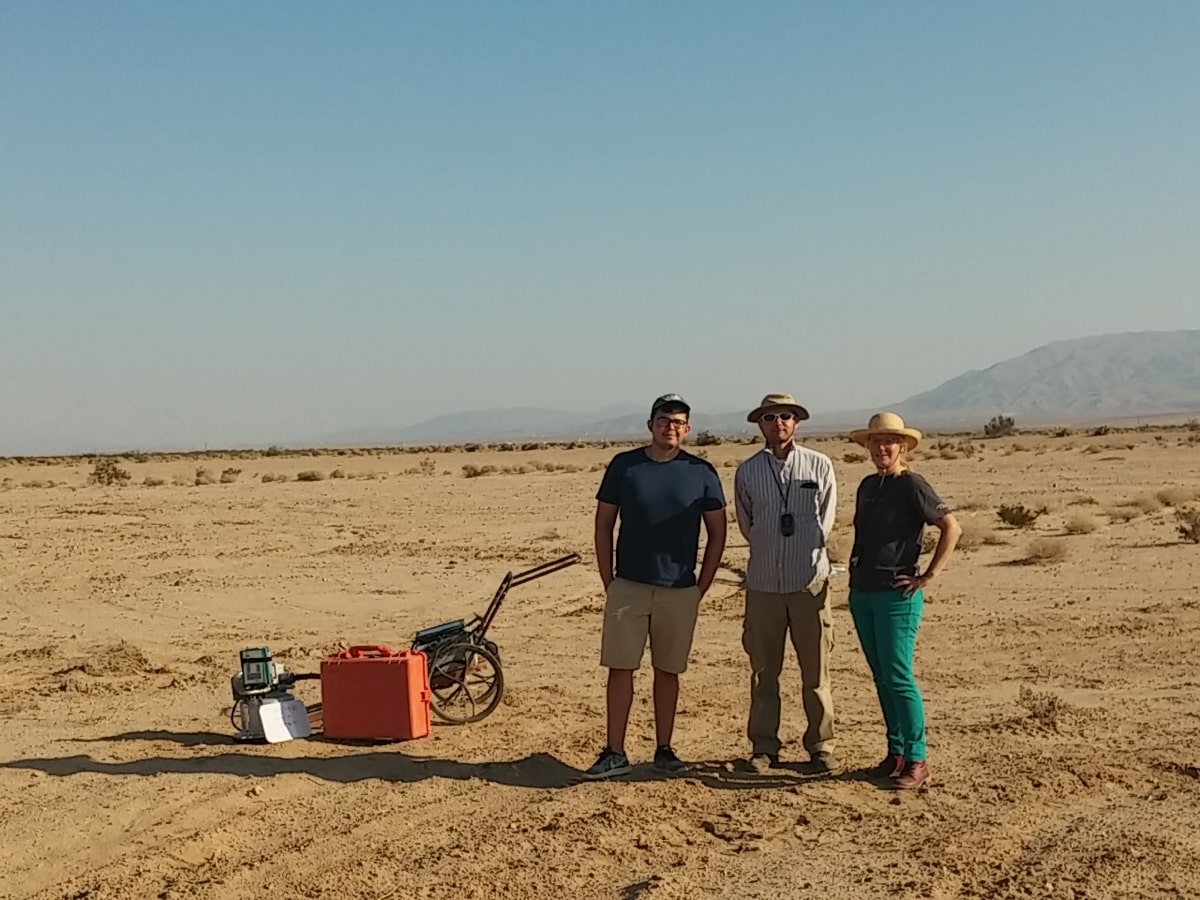 DRI: How do you hope that these findings are used?

All of our research findings are preliminary, but they essentially provide a conceptual model of how we think the exposure happens. We think that most of the time when people are exposed to this, it is probably as a result of a recent land disturbance — maybe a construction or farming activity that disturbs otherwise undisturbed landscapes. So, you have this fungus that’s been growing in the soils at some depth below the surface for who knows how long, and then all of the sudden, something changes. You pull off the vegetation, you turn it over, and as a result you bring a lot of this fungus to the surface. Then as a part of that process, you have an enormous amount of material available for resuspension by wind or even direct resuspension. So, I think a logical next step would be to very specifically target those kinds of activities to see if that hypothesis holds true.

The full text of the paper “Valley Fever: Environmental Risk Factors and Exposure Pathways Deduced from Field Measurements in California,” is available from the International Journal of Environmental Health and Public Research: https://www.mdpi.com/1660-4601/17/15/5285

For more information on Vic Etyemezian and his research, please visit: https://www.dri.edu/directory/vicken-etyemezian/