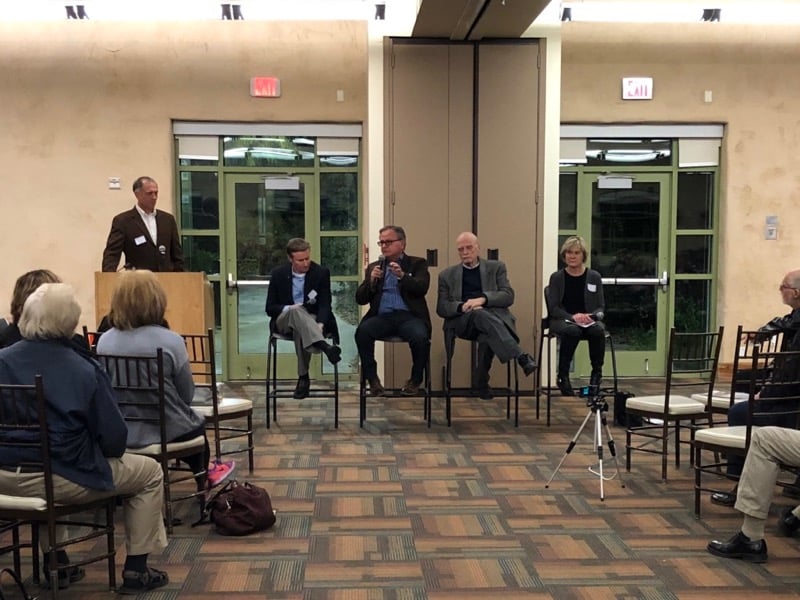 “I knew our research institutions were doing solar energy research, but I didn’t realize how much they were doing,” said Nevada State Assemblyman Chris Brooks in welcoming attendees to the “Solar Nexus: Nevada’s Research Institutions Supporting our Community” panel event at the Springs Preserve on November 14th.

This panel discussion, attended by members of the Las Vegas community, featured researchers from DRI and the University of Nevada, Las Vegas (UNLV)–Eric Wilcox, Ph.D. (DRI), Gayle Dayna, Ph.D. (DRI), Dale Devitt, Ph.D. (UNLV), and Bob Boehm, Ph.D. (UNLV)–all of whom have who have spent the last five years working on the Solar Energy, Water, and Environment Nexus in Nevada project, a wide-ranging research project sponsored by the Nevada System Sponsored Programs and Established Program to Stimulate Competitive Research (EPSCoR).

The Solar Nexus project (for short), which also includes researchers from University of Nevada, Reno, began in June 2013, its focus the nexus between solar energy generation, Nevada’s limited water resources, and the state’s fragile environment. Existing industrial solar panel models require water to keep them producing solar power at the rate at which they were intended and alter their surrounding environments, so research is needed to provide solutions to these potential barriers to widespread solar energy adoption in desert environments like Nevada.

The Solar Nexus project has involved a wide range of research over the last five years, all of it collaborative—48 faculty, 14 technical staff, and over 30 graduate students from DRI, UNLV, and UNR have been involved over the five years of the project. Research included but was not limited to the testing of dry cooling methods for solar panels to conserve water resources, investigating the impact of panels on rainwater infiltration into soils, examining the possibilities for desert soil restoration, and studying the factors that impact solar power generation and may cause it to fluctuate, like cloud cover.

All areas of study pursued by the project interweaved the goals of promoting economic diversification in Nevada, minimizing the negative environmental impacts of solar energy development while achieving maximum benefits, and developing the cyberinfrastructure and diverse, educated workforce needed to sustain the renewable energy industry in Nevada.

“The Solar Nexus project has put Nevada on the map with regard to the engineering and research related to solar energy,” said Dana, DRI project director and Nevada EPSCoR Director.

During the panel discussion, Dana and her fellow panelists were quick to point out, however, that research goals were not the only ones met by the project: the economic and workforce development outcomes of the project were also significant.

“Workforce development is a really big part of the Solar Nexus project, and we have a number of different mechanisms built in to develop this pipeline of educators and students,” said Dana. The project helped create new faculty and graduate student positions at each of the state’s research institutions, filling out each institution in terms of research area expertise related to solar energy that hadn’t been represented in the past. In all, nearly forty students graduated with advanced degrees related to renewable energy after working on the Solar Nexus project.

Beyond building capacity in the research expertise of Nevada’s research institutions, the project also helped expand the possibilities for commercialization of new technologies related to solar energy. This entrepreneurial activity has a ripple effect.

“Universities are an economic driver for the community,” explained Wilcox, associate research professor of climatology at DRI and solar forecasting researcher on the Solar Nexus project. “Economic growth draws on the intellectual production of faculty at our research institutions.”

With this project coming to a close this year, researchers are looking ahead to the next round of EPSCoR funding and another project that can build research excellence and drive economic development. EPSCoR is a program run by the National Science Foundation that works to stimulate research capacity and competitiveness in states that receive comparatively less federal funding. Nevada is one of 28 states, in addition to Puerto Rico, Guam, and the U.S. Virgin Islands, eligible for EPSCoR funding.

To hear from DRI’s Markus Berli about the Solar Nexus project on the Shades of Green radio show, hosted by Green Alliance, visit: http://www.greenalliancenv.org/blog/nexus-of-water-and-energy-usage.

To browse an archive of stories about the Solar Nexus project’s research and impact for the state, visit: https://solarnexus.epscorspo.nevada.edu/about/feature-articles/.