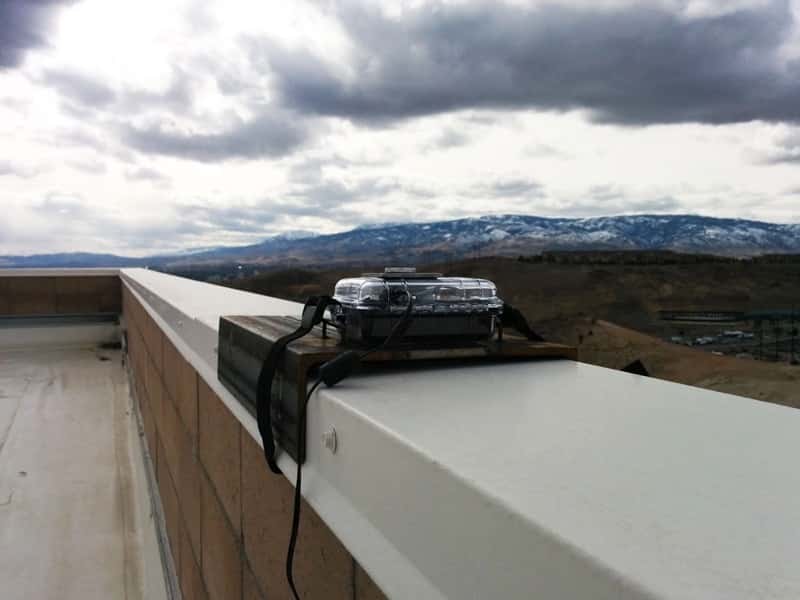 Reno, NV (September 1, 2018) – Solar energy is a clean and renewable energy source, but integrating solar power into the grid is not without challenges. For electricity to be useful, it needs to be delivered to users in a steady, reliable, and affordable way, says NEXUS scientist Eric Wilcox of the Desert Research Institute (DRI). But solar energy can only be generated when the sun is shining, so to guarantee a reliable source of electricity requires using power from other sources when the sun goes down or clouds shade solar panels. “This poses both a technical and an economic challenge,” Wilcox says. “How can we design systems so that solar power is maximized and backup power generation is minimized?”

NEXUS researchers have addressed this question from a variety of perspectives. Scientists at DRI and the University of Nevada, Las Vegas (UNLV) have investigated the fluctuations in solar power production due to cloudiness, in an attempt to build accurate forecasts. At UNLV, researchers have built a microgrid—a mini version of the electric power grid—that can operate independently of the main grid for testing “smart” technology. Such technologies will maintain a steady power supply when transitioning between solar power, gas-generated backup, and battery storage systems. Economics researchers at the University of Nevada, Reno (UNR) have also been performing economic analyses to determine how behavioral economics can motivate greater efficiency and utilization of renewable energy.“The promise of the approaches used and technology under development by this group is central to the mission of increasing the utilization of solar energy and mitigating pollution, by reducing the amount of fossil-fuel generated backup power needed to protect electricity grids from fluctuations in solar power generation,” Wilcox says.

Although Nevada enjoys many sunny days each year, every few weeks or so, the North American monsoon effect carries moisture from the Gulf of California to form clouds over Southern Nevada. And when these clouds come, solar facilities can’t produce as much power.

Numerical weather prediction models can determine when one of these weather events will arrive up to five days in advance, but the models can’t predict when a particular cloud will move in between a solar panel array and the sun. Typically during these times, the amount of sunlight reaching a panel can vary dramatically over very short time scales, causing large fluctuations in voltage and power. Ideally, grid operators could anticipate from the forecasts when these events occur, so that they could coordinate a smooth transition toward using alternative power sources.

“The research has demonstrated the validity of using fluctuations in regional humidity over Las Vegas to characterize the error in solar forecasts derived from numerical weather prediction models,” Wilcox says. “So it will help achieve more accurate day-ahead solar forecasting.”

To detect and predict these quick power fluctuations, Wilcox and his team have built a prototype sky-imaging camera that takes images of the sky in the vicinity of solar photovoltaic (PV) arrays. The weatherproof camera takes the pictures and then analyzes them to distinguish cloudy pixels, which are the smallest units of a digital image, from clear sky pixels. Using this information, a computer algorithm can then track the movement of a cloud and predict when it will shade the PV array.

Following from this work, UNLV assistant professor Brendan Morris has explored more accurate prediction algorithms and UNLV scientist Venkatesan Muthukumar has investigated other concepts to produce distributed sensors for forecasting solar fluctuations. “This idea has really seemed to have caught on now and spread well beyond our DRI lab,” Wilcox says.

The low cost of the developed tool means the scientists could deploy the instruments at distributed solar PV sites in the city of Las Vegas and develop a shared database of sky images. This wealth of data will mean the researchers can continue to refine the algorithms that predict the cloud movements. “The goal is to build networks of sensors that can make predictions of solar generation fluctuations and communicate those forecasts to advanced control systems,” Wilcox says.
The researchers are continuing to work on developing the idea of making short-term forecasts of cloud cover in as little as 5 to 20 minutes away. The goal is to determine if the low-cost forecasting technology can make a difference in optimizing the use of batteries, such as the Tesla Powerwall batteries. “Grid operators may also be interested in the networked nature of this solution, so that optimization can happen at the neighborhood scale,” Wilcox says.

As the U.S. electric grid has been starting to run up against its limitations, the Department of Energy (DOE) has developed a vision of a future, more resilient, “smart” electric power infrastructure. The DOE Smart Grid Research and Development Program considers microgrids— localized grids that can disconnect from the traditional grid to operate autonomously—as key building blocks for this smart grid. Using such microgrids would facilitate integrating renewable sources of energy into the electrical infrastructure and offer other advantages for grid reliability.

“Microgrids can strengthen the grid resilience which is becoming increasingly important in the face of the increased frequency and intensity of power outages caused by severe weather due to climate change,” says NEXUS scientist Dr. Yahia Baghzouz of UNLV.

Baghzouz and his team have built a small microgrid at UNLV, which acts as a test bed to investigate the various devices that will be needed for the smart grid and technologies that will ultimately help with the integration of renewable energy resources into the grid infrastructure. Using this microgrid, the scientists have demonstrated that advanced inverters, which convert the output of photovoltaic solar arrays into utility frequency alternating current, can be configured to ride through voltage and frequency disturbances as well as assist with voltage support and reactive power requirements.

Simultaneously, NEXUS scientists Mehdi Etezadi-Amoli and M. Sami Fadali at UNR have built a new lab for simulating real-time digital monitoring and control of remote systems, such as the UNLV microgrid. Baghzouz is also testing the DRI forecasting technology for its ability to smooth out variations in solar power output to the electricity grid when coordinated with a battery energy storage system.
“The microgrid is the natural place to see how we can combine forecasting technology with other smart grid technology with the goal of increasing the reliability of solar power on the electric grid,” Wilcox says.

A Different Type of Forecast

Solar power has the potential to supply a sustainable and clean source of energy to households and industry in the state of Nevada and beyond, but to fully realize its benefits requires a detailed understanding of the economic costs and risks associated with its use. “The incorporation of solar into our power supply has to be done with the highest of knowledge, not only in engineering but also in economics,” says NEXUS economist Dr. Thomas Harris at UNR.

Consequently, Harris has also been looking at the risks, for investors, associated with this sustainable energy source. His work has demonstrated that income tax credits and appropriate depreciation schedules can yield rates of return on solar development greater than 15 percent, which is sufficient for private investment. The study also estimates that solar energy development on the 60,000 acres of Nevada designated by the Bureau of Land Management as Solar Economic Zones has the potential to yield $326 million annually in positive impacts on output, employment, and household income.

NEXUS economist Dr. Dilek Uz has been looking into solar energy policy and its political implications. “If, as a society, we have ambitious environmental goals, it is important that we reach them in the most cost effective way possible,” Uz says. When it comes to solar, large-scale projects seem to offer significant cost advantages relative to residential rooftop installations, however the whole issue is highly controversial and politically charged, Uz says.

Storage is the key to integrating renewables into the grid and this is where the new frontier in power utility regulation is, Uz says. Currently the renewable energy policy toolbox of many states includes rebates for residential rooftop solar installations as well as favorable rates for residential solar power. Uz is researching how the different benefits provided by owning a rooftop panel are valued at the residential level. It is research that will inform policy on the correct subsidy level for better use of tax payer money. She is also looking into how owning a rooftop solar panel correlates with voting patterns on energy related issues.
The economics team is also collaborating with the DRI researchers in analyzing the benefits of improved cloud forecasting techniques to mitigate the impacts of intermittency on the economics of solar. “How much does using this technology cost?” Harris says. “It is a very complicated issue from a solar standpoint.”
For solar power to be not just sustainable, but profitable, in future decades economists have to investigate all the variables and permutations associated with this relatively new industry, Harris says.

A common thread running through the research investigating maximizing the benefits of solar power while minimizing the costs is that of building models to test out different systems, technologies and theories. At DRI, the scientists numerically simulate the weather using a supercomputer and at UNLV, the engineers have constructed a physical model of a grid in the form of the experimental microgrid.
Creating such models allows the scientists to see how such complex systems would react in different scenarios e.g., to investigate how the solar power responds to different degrees of cloudiness, or how different technologies can smooth out fluctuations in the grid. Questions like these are difficult to answer only by observing real systems because often so many elements of the system change at the same time. “Modeling is an important research tool for estimating the behavior of such complex systems because we can carefully control the environment,” Wilcox says.
Similarly, at UNR, the NEXUS economists have constructed numerical models to simulate the economic relationships among participants in the energy and development markets in Nevada.

Fluctuations in solar and wind generation are often cited as a limiting factor in preventing generation of a large majority of electricity from renewable sources, Wilcox says. “We seek to understand the economic factors that may limit solar electricity development and then we seek to mitigate the fluctuations that limit the extent to which the grid can depend on solar electricity,” he says. “Overcoming these limitations is essential to reducing greenhouse gases and other pollution emissions from traditional fossil fuel sources of electricity generation.”###

This article was written by Jane Palmer for the Solar Nexus project. The original post is available here:  https://solarnexus.epscorspo.nevada.edu/secrets-of-successful-solar/

Started June 1, 2013, the Solar Nexus Project is a multifaceted five-year research project focusing on the nexus (or linkage between) solar energy generation and Nevada’s limited water resources and fragile environment. The focus of the Solar Nexus Project is creating a center of research excellence on solar energy conversion to electricity, minimizing its negative impacts on water usage and the environment. In essence, seeking to create a paradigm shift in how solar plants are built and utilized, helping Nevada establish itself as a competitive state in the field of solar nexus research.