Satellite technologies often struggle to differentiate snow from rain near the freezing point in mountainous regions, with impacts on flood predictions, avalanche forecasting, snowpack water storage, and road safety. To help improve these technologies, researchers from Lynker, DRI, and the University of Nevada, Reno are partnering with community observers to track winter storm activity across the country through a project called Mountain Rain or Snow. The project has been so successful at collecting data that demonstrates regional variation in the rain-snow threshold that NASA’s Citizen Science for Earth Systems Program is funding an additional three years.

The project began in 2019 as Tahoe Rain or Snow and expanded last year to include mountain regions across the country. Last winter, more than 1,100 people in the Sierra Nevada, Pacific Northwest, Rocky Mountains, and Northeast submitted real-time reports of rain, snow, or mixed precipitation. Community observers submitted 15,000 observations – a six-fold increase over the previous winter.

“Scientists have noticed that satellite predictions are not as effective as ground-based observations,” says Keith Jennings, Ph.D., water resources scientist at Lynker and the project lead. “Direct observations, made by people, are the most accurate way to discover how precipitation phase varies in time and space. We are filling an important gap with this project.”

Community members sign up to receive alerts when storms with predicted temperatures near freezing are in the forecast, and submit observations of the type of precipitation they are seeing via a web-based mobile phone app. These reports show that the Sierra Nevada region transitions from rain to snow around 36 degrees Fahrenheit, rather than around the freezing temperature of 32 degrees. In the Rockies, the snow-rain threshold is closer to 40 degrees, while it’s around 33 degrees in the Northeast. Expanding the project to include more regions will help scientists understand how the rain-to-snow temperature threshold varies according to local atmospheric conditions, improve scientists’ ability to make locally-relevant predictions, and improve the technology behind rain-snow estimates.

“With the help of community observers, we are amassing a very large database of ground-based observations. These will ultimately help to improve the predictive technologies that satellites use,” says Meghan Collins, M.S., associate research scientist at DRI. “The data the community observers have helped us collect is a big step towards being able to make those improvements. We understand the state of the problem much better now and will use the next three years to advance the solution.”

Mountain Rain or Snow welcomes new community observers as it expands to additional regions this season, including the Eastern Great Lakes; the Wasatch Range around Salt Lake City; and Western Montana around Missoula. To sign up, observers find the keyword that corresponds to their region at www.rainorsnow.org. Then, text the keyword to 855-909-0798 for guidance on how to participate.

Mountain Rain or Snow is a collaboration between Lynker, DRI, and the University of Nevada-Reno. In addition to the large network of community observers, the project team includes: Keith Jennings of Lynker; Monica Arienzo, Meghan Collins, and Benjamin Hatchett of DRI; Anne Nolin of the University of Nevada, Reno; and several student researchers. The group has expertise in hydroclimatology, hydrology, and geospatial analysis. 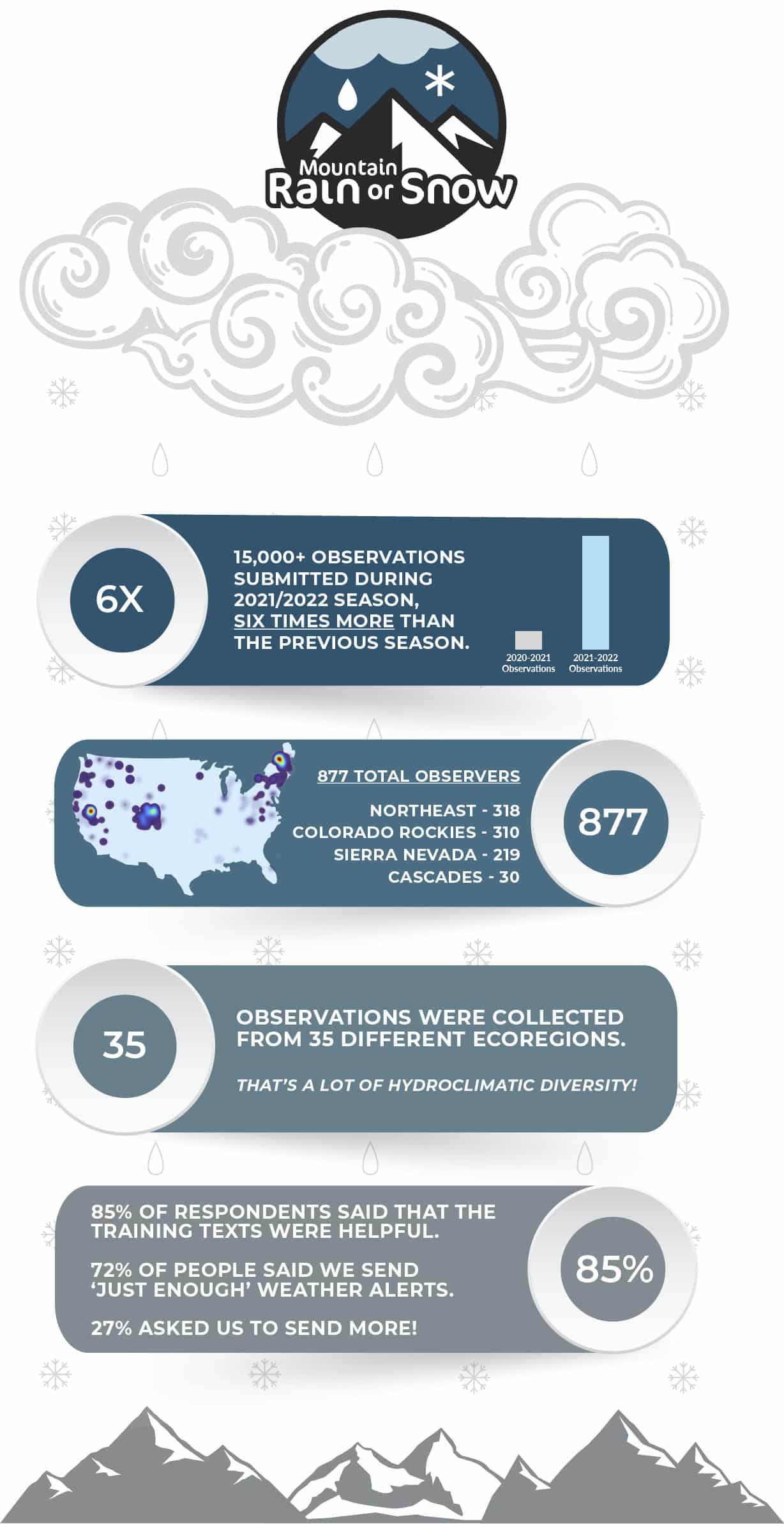 Lynker delivers innovative solutions to support global environment security and economic prosperity as a trusted partner to governments, communities, industry, and nonprofits. We are a premier science, engineering, and technology company supporting some of the nation’s most important missions from atmosphere to ocean. We are scientists, engineers, conservationists, divers, observers, developers, technologists, educators, outreach specialists, artists, economists, policy specialists, and managers.

About the University of Nevada, Reno

The University of Nevada, Reno, is a public research university that is committed to the promise of a future powered by knowledge. Nevada’s land-grant university founded in 1874, the University serves 21,000 students. The University is a comprehensive, doctoral university, classified as an R1 institution with very high research activity by the Carnegie Classification of Institutions of Higher Education. Additionally, it has attained the prestigious “Carnegie Engaged” classification, reflecting its student and institutional impact on civic engagement and service, fostered by extensive community and statewide collaborations. More than $800 million in advanced labs, residence halls and facilities has been invested on campus since 2009. It is home to the University of Nevada, Reno School of Medicine and Wolf Pack Athletics, maintains a statewide outreach mission and presence through programs such as the University of Nevada, Reno Extension, Nevada Bureau of Mines and Geology, Small Business Development Center, Nevada Seismological Laboratory, and is part of the Nevada System of Higher Education. Through a commitment to world-improving research, student success and outreach benefiting the communities and businesses of Nevada, the University has impact across the state and around the world. For more information, visit www.unr.edu.