Above: After a storm at the drilling camp on James Ross Island, northern Antarctic Peninsula.
Credit: Robert Mulvaney
New study links an increase in black carbon in Antarctic ice cores to Māori burning practices in New Zealand more than 700 years ago 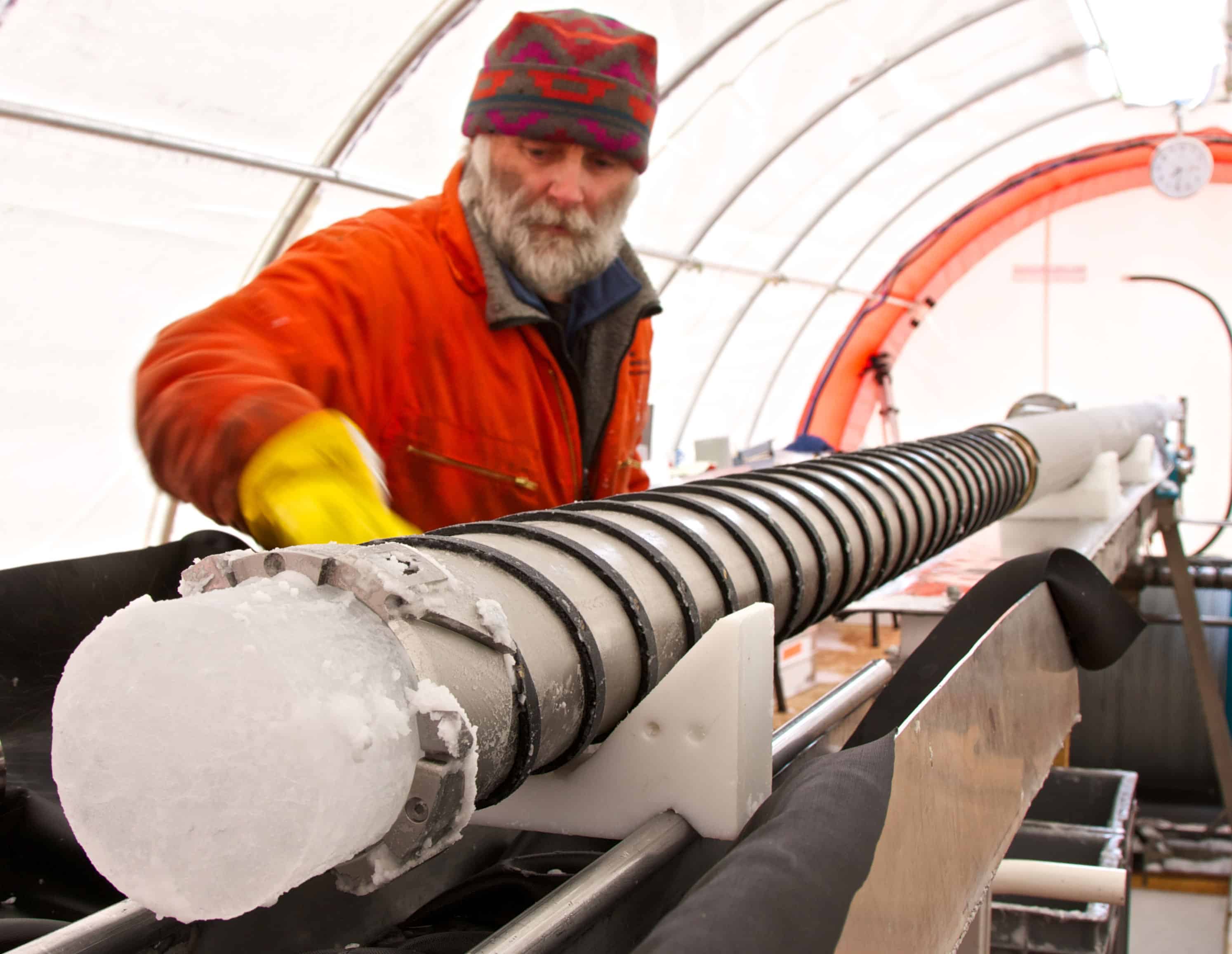 The James Ross Island core drilled to bedrock in 2008 by the British Antarctic Survey provided an unprecedented record of soot deposition in the northern Antarctic Peninsula during the past 2000 years and revealed the surprising impacts of Māori burning in New Zealand starting in the late 13th century. Robert Mulvaney, Ph.D., pictured here led collection of the core.
Credit: Jack Triest 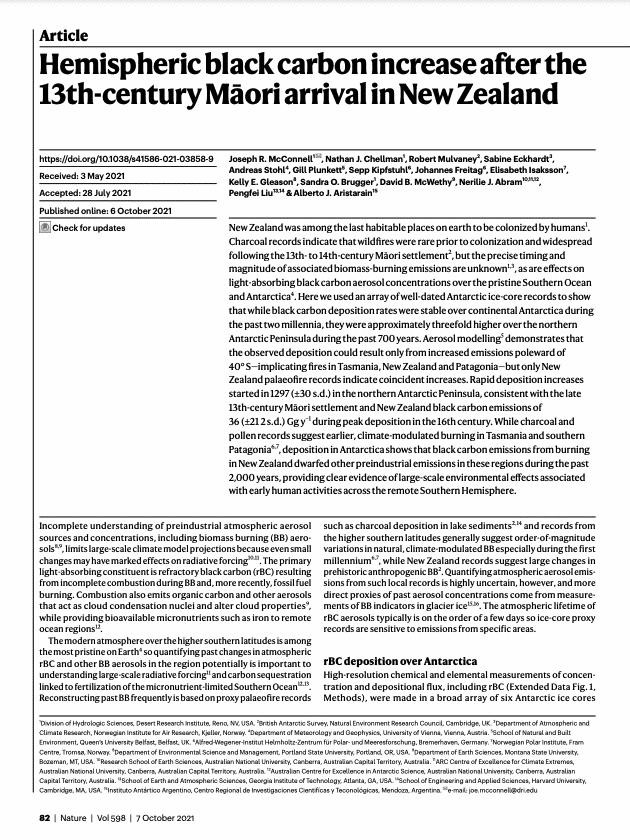 The full text of the study, Hemispheric black carbon increase after 13th C Māori arrival in New Zealand, is available from Nature: https://www.nature.com/articles/s41586-021-03858-9

Reno, Nev. (October 6, 2021) – Several years ago, while analyzing ice core samples from Antarctica’s James Ross Island, scientists Joe McConnell, Ph.D., and Nathan Chellman, Ph.D., from DRI, and Robert Mulvaney, Ph.D., from the British Antarctic Survey noticed something unusual: a substantial increase in levels of black carbon that began around the year 1300 and continued to the modern day.

Black carbon, commonly referred to as soot, is a light-absorbing particle that comes from combustion sources such as biomass burning (e.g. forest fires) and, more recently, fossil fuel combustion. Working in collaboration with an international team of scientists from the United Kingdom, Austria, Norway, Germany, Australia, Argentina, and the U.S., McConnell, Chellman, and Mulvaney set out to uncover the origins of the unexpected increase in black carbon captured in the Antarctic ice.

The team’s findings, which published this week in Nature, point to an unlikely source: ancient Māori land-burning practices in New Zealand, conducted at a scale that impacted the earth’s atmosphere across much of the Southern Hemisphere and dwarfed other preindustrial emissions in the region during the past 2,000 years.

“The idea that humans at this time in history caused such a significant change in atmospheric black carbon through their land clearing activities is quite surprising,” said McConnell, research professor of hydrology at DRI who designed and led the study. “We used to think that if you went back a few hundred years you’d be looking at a pristine, pre-industrial world, but it’s clear from this study that humans have been impacting the environment over the Southern Ocean and the Antarctica Peninsula for at least the last 700 years.” 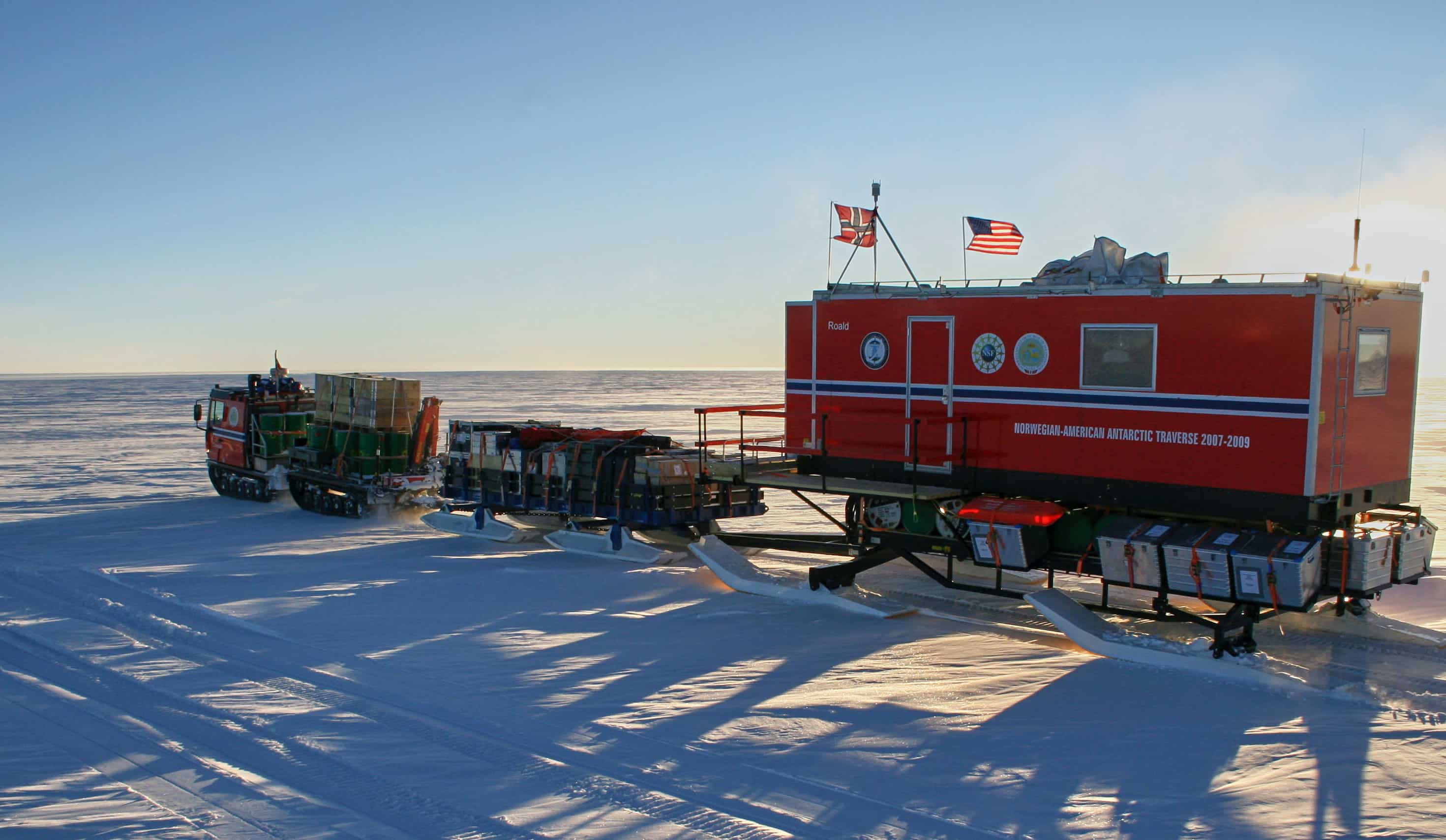 To identify the source of the black carbon, the study team analyzed an array of six ice cores collected from James Ross Island and continental Antarctica using DRI’s unique continuous ice-core analytical system. The method used to analyze black carbon in ice was first developed in McConnell’s lab in 2007.

While the ice core from James Ross Island showed a notable increase in black carbon beginning around the year 1300, with levels tripling over the 700 years that followed and peaking during the 16th and 17th centuries, black carbon levels at sites in continental Antarctica during the same period of time stayed relatively stable.

Andreas Stohl, Ph.D., of the University of Vienna led atmospheric model simulations of the transport and deposition of black carbon around the Southern Hemisphere that supported the findings.

“From our models and the deposition pattern over Antarctica seen in the ice, it is clear that Patagonia, Tasmania, and New Zealand were the most likely points of origin of the increased black carbon emissions starting about 1300,” said Stohl.

After consulting paleofire records from each of the three regions, only one viable possibility remained: New Zealand, where charcoal records showed a major increase in fire activity beginning about the year 1300. This date also coincided with the estimated arrival, colonization, and subsequent burning of much of New Zealand’s forested areas by the Māori people.

This was a surprising conclusion, given New Zealand’s relatively small land area and the distance (nearly 4,500 miles), that smoke would have travelled to reach the ice core site on James Ross Island.

“Compared to natural burning in places like the Amazon, or Southern Africa, or Australia, you wouldn’t expect Māori burning in New Zealand to have a big impact, but it does over the Southern Ocean and the Antarctic Peninsula,” said Chellman, postdoctoral fellow at DRI. “Being able to use ice core records to show impacts on atmospheric chemistry that reached across the entire Southern Ocean, and being able to attribute that to the Māori arrival and settlement of New Zealand 700 years ago was really amazing.” 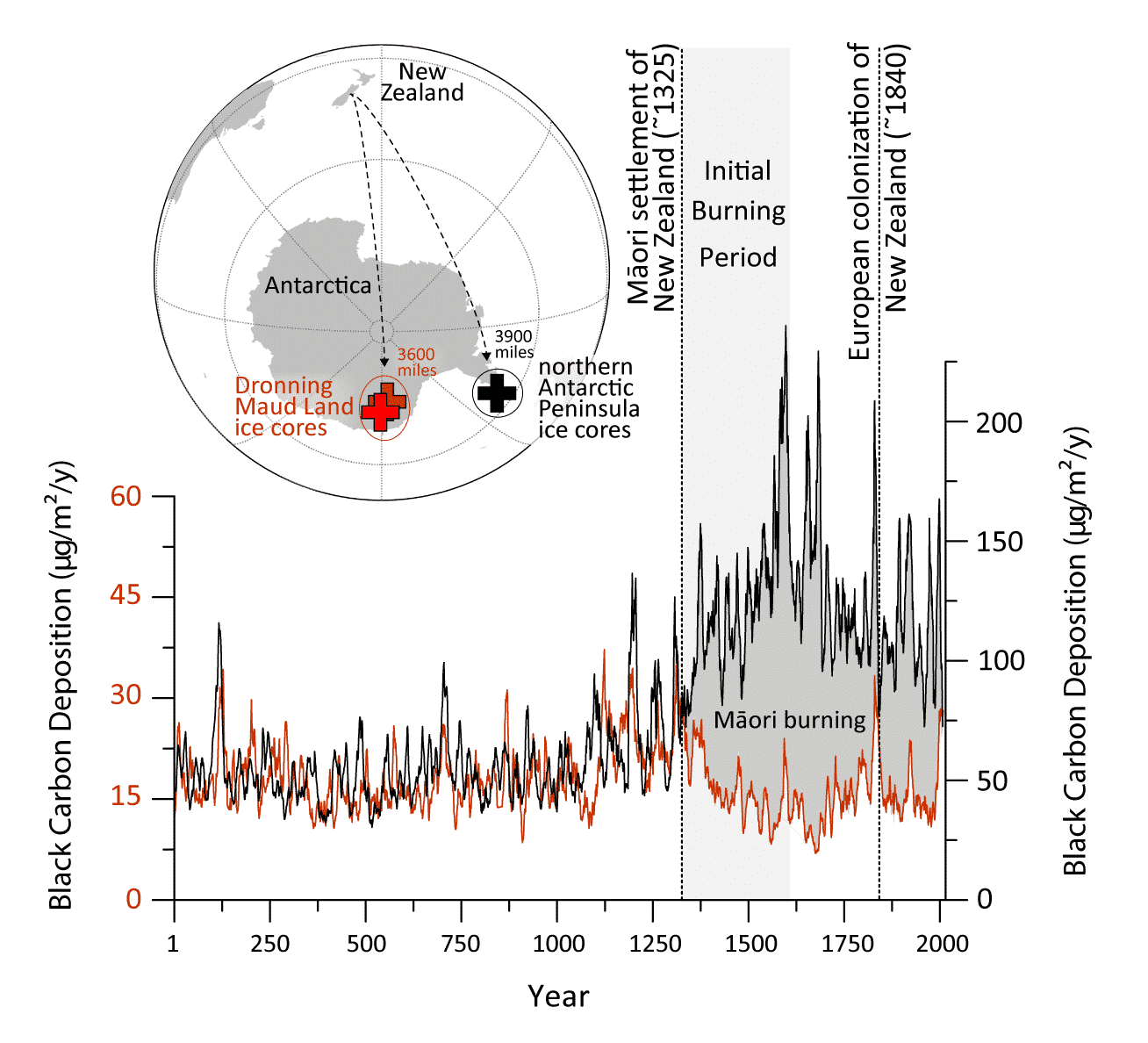 Black carbon deposition during the past 2000 years measured in ice cores from Dronning Maud Land in continental Antarctica and James Ross Island at the northern tip of the Antarctic Peninsula. Atmospheric modeling and local burning records indicate that the pronounced increase in deposition in the northern Antarctic Peninsula starting in the late 13th century was related to Māori settlement of New Zealand nearly 4000 miles away and their use of fire for land clearing and management. Inset shows locations of New Zealand and ice-core drilling sites in Antarctica.
Credit: DRI
Research impacts

The study findings are important for a number of reasons. First, the results have important implications for our understanding of Earth’s atmosphere and climate. Modern climate models rely on accurate information about past climate to make projections for the future, especially on emissions and concentrations of light-absorbing black carbon linked to Earth’s radiative balance. Although it is often assumed that human impacts during preindustrial times were negligible compared to background or natural burning, this study provides new evidence that emissions from human-related burning have impacted Earth’s atmosphere and possibly its climate far earlier, and at scales far larger, than previously imagined.

Third, the results refine what is known about the timing of the arrival of the Māori in New Zealand, one of the last habitable places on earth to be colonized by humans. Māori arrival dates based on radiocarbon dates vary from the 13th to 14th century, but the more precise dating made possible by the ice core records pinpoints the start of large scale burning by early Māori in New Zealand to 1297, with an uncertainty of 30 years.

“From this study and other previous work our team has done such as on 2,000-year old lead pollution in the Arctic from ancient Rome, it is clear that ice core records are very valuable for learning about past human impacts on the environment,” McConnell said. “Even the most remote parts of Earth were not necessarily pristine in preindustrial times.” 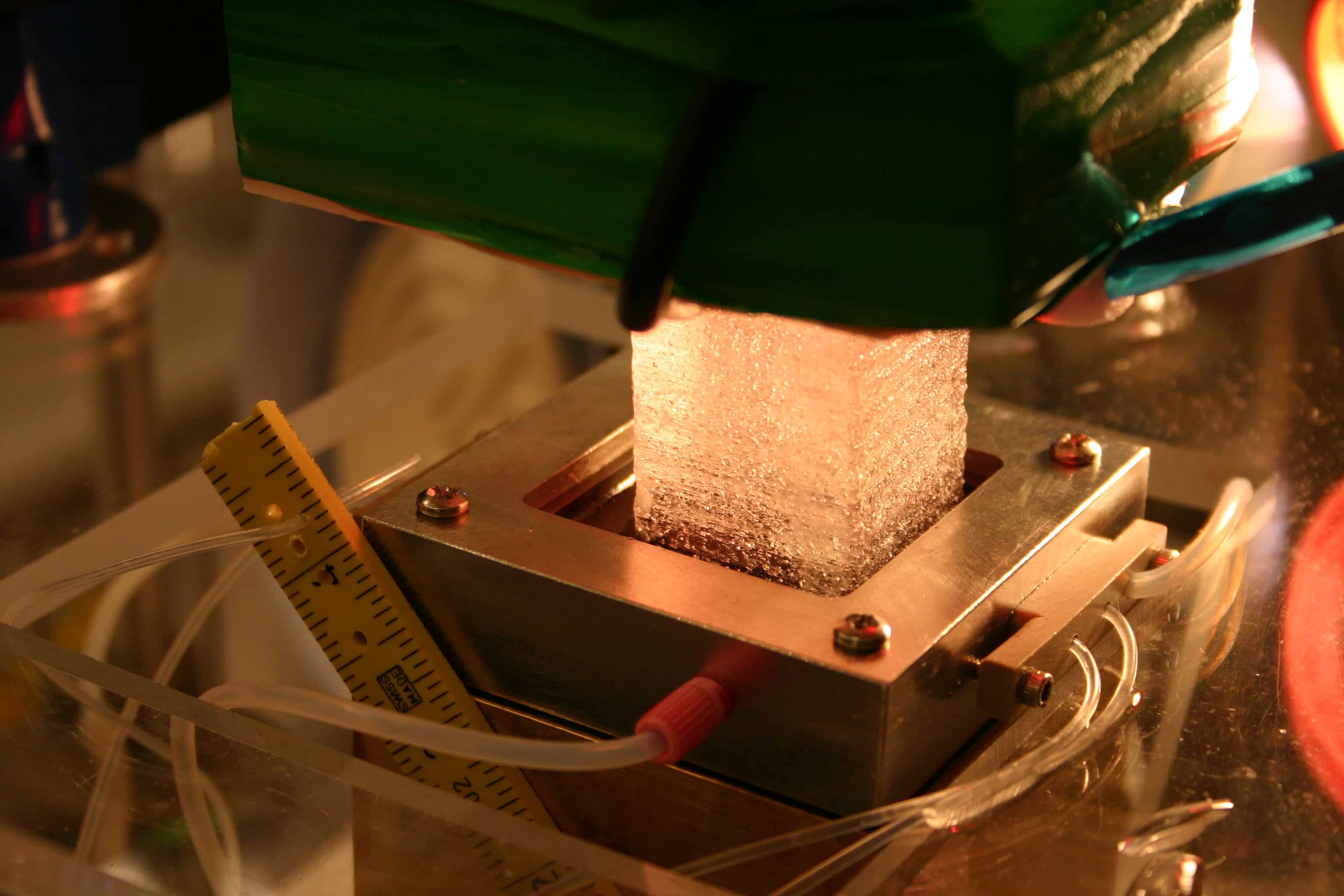 Measuring the chemistry in a longitudinal sample of an ice core on DRI’s unique ice core analytical system.