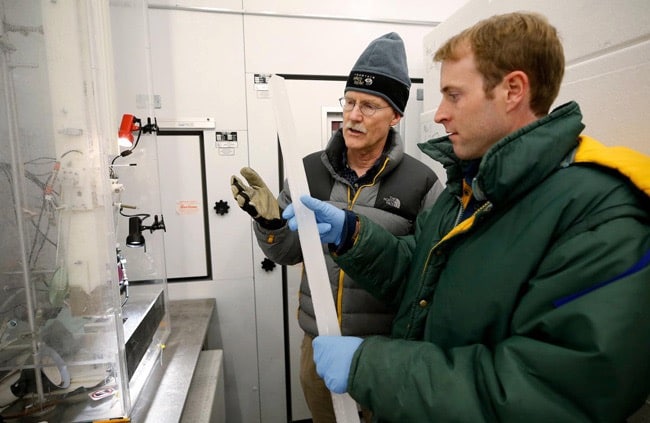 Photo: Dr. Joe McConnell and graduate student Nathan Chellman work in the ice lab at the Desert Research Institute, in Reno, Nev., on Wednesday, May 15, 2019. Photo by Cathleen Allison/Nevada Momentum.

RENO, Nev. (July 8, 2019) – How did events like the Black Death plague impact the economy of Medieval Europe? Particles of lead trapped deep in Arctic ice can tell us.

Commercial and industrial processes have emitted lead into the atmosphere for thousands of years, from the mining and smelting of silver ores to make currency for ancient Rome to the burning of fossil fuels today. This lead pollution travels on wind currents through the atmosphere, eventually settling on places like the ice sheet in Greenland and other parts of the Arctic.

Because of lead’s connection to precious metals like silver and the fact that natural lead levels in the environment are very low, scientists have found that lead deposits in layers of Arctic ice are a sensitive indicator of overall economic activity throughout history.

In a new study published in the Proceedings of the National Academy of Sciences, researchers from the Desert Research Institute (DRI), the University of Oxford, NILU – Norwegian Institute for Air Research, the University of Copenhagen, the University of Rochester, the Alfred Wegener Institute for Polar and Marine Research used thirteen Arctic ice cores from Greenland and the Russian Arctic to measure, date, and analyze lead emissions captured in the ice from 500 to 2010 CE, a period of time that extended from the Middle Ages through the Modern Period to the present.

This work builds on a study published by some of the same researchers in 2018, which showed how lead pollution in a single ice core from Greenland tracked the ups and downs of the European economy between 1100 BCE and 800 CE, a period which included the Greek and Roman empires.

“We have extended our earlier record through the Middle Ages and Modern Period to the present,” explained Joe McConnell, Ph.D., lead author on the study and Director of DRI’s Ultra-Trace Ice Core Chemistry Laboratory in Reno, Nevada. “Using an array of thirteen ice cores instead of just one, this new study shows that prior to the Industrial Revolution, lead pollution was pervasive and surprisingly similar across a large swath of the Arctic and undoubtedly the result of European emissions. The ice-core array provides with amazing detail a continuous record of European – and later North American – industrial emissions during the past 1500 years.”

“Developing and interpreting such an extensive array of Arctic ice-core records would have been impossible without international collaboration,” McConnell added.

The research team found that increases in lead concentration in the ice cores track closely with periods of expansion in Europe, the advent of new technologies, and economic prosperity. Decreases in lead, on the other hand, paralleled climate disruptions, wars, plagues, and famines.

“Sustained increases in lead pollution during the Early and High Middle Ages (about 800 to 1300 CE), for example, indicate widespread economic growth, particularly in central Europe as new mining areas were discovered in places like the German Harz and Erzgebirge Mountains, “McConnell noted. “Lead pollution in the ice core records declined during the Late Middle Ages and Early Modern Period (about 1300 to 1680 Ce) when plague devastated those regions, however, indicating that economic activity stalled.”

Even with ups and downs over time due to events such as plagues, the study shows that increases in lead pollution in the Arctic during the past 1500 years have been exponential.

“We found an overall 250 to 300-fold increase in Arctic lead pollution from the start of the Middle Ages in 500 CE to 1970s,” explained Nathan Chellman, a doctoral student at DRI and coauthor on the study. “Since the passage of pollution abatement policies, including the 1970 Clean Air Act in the United States, lead pollution in Arctic ice has declined more than 80 percent.”

“Still, lead levels are about 60 times higher today than they were at the beginning of the Middle Ages,” Chellman added.

This study included an array of ice cores and the research team used state-of-the-art atmospheric modeling to determine the relative sensitivity of different ice-core sites in the Arctic to lead emissions.

“Modeling shows that the core from the Russian Arctic is more sensitive to European emissions, particularly from eastern parts of Europe, than cores from Greenland,” explained Andreas Stohl, Ph.D., an atmospheric scientist at NILU and coauthor on the study. “This is why we found consistently higher levels of lead pollution in the Russian Arctic core and more rapid increases during the Early and High Middle Ages as mining operations shifted north and east from the Iberian Peninsula to Great Britain and Germany.” 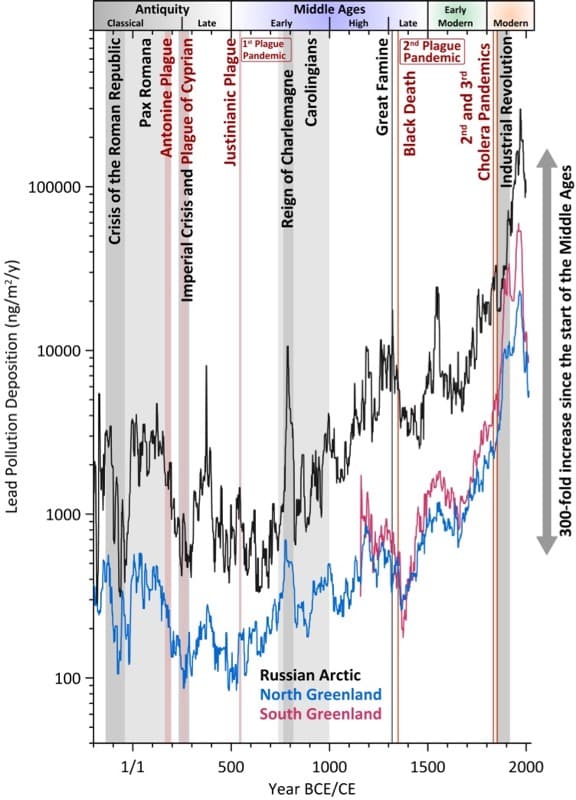 Lead pollution found in 13 ice cores from three different regions of the Arctic (North Greenland, South Greenland, and the Russian Arctic) from 200 BCE to 2010 CE. Increases in lead deposition coincided with times of economic prosperity, such as the Industrial Revolution in the mid-19th century. Dramatic declines in lead pollution followed crises such as the Black Death Plague Pandemic starting about 1347 CE, as well as pollution abatement policies such as the 1970 U.S. Clean Air Act.

The combination of expertise on this study is unique, continuing collaboration between researchers in fields as different as ice-core chemistry and economic history. These results, the team argues, are a testament to the benefits of interdisciplinary collaboration.

“What we’re finding is interesting not just to environmental scientists who want to understand how human activity has altered the environment,” said Andrew Wilson, Ph.D., Professor of the Archaeology of the Roman Empire at Oxford and co-author on the study. “These ice-core records also are helping historians to understand and quantify the ways that societies and their economies have responded to external forces such as climate disruptions, plagues, or political unrest.”

Collection, analysis, and interpretation of the ice cores used in this study were supported by the U.S. National Science Foundation, NASA, the John Fell Oxford University Press Research Fund and All Souls College, Oxford, the German Ministry of Education and Research, the German Research Foundation, and the Desert Research Institute. 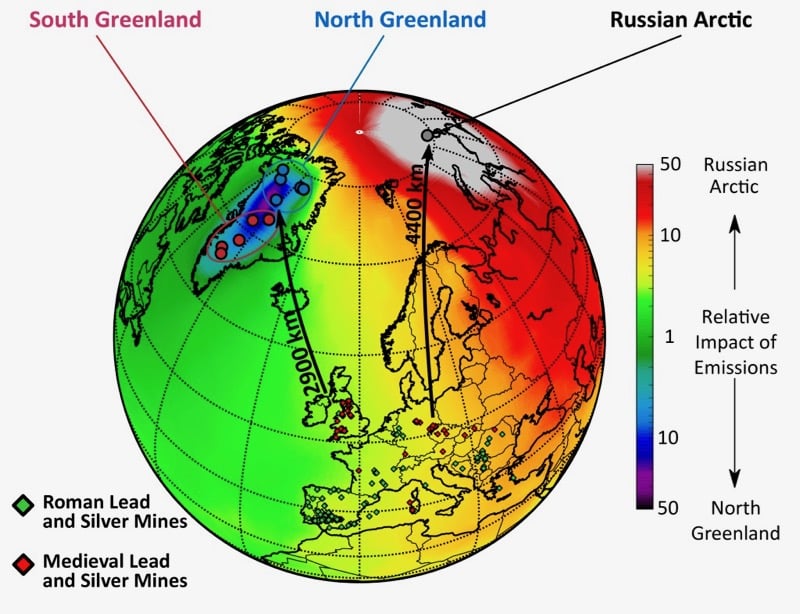 The Desert Research Institute (DRI) is a recognized world leader in basic and applied interdisciplinary research. Committed to scientific excellence and integrity, DRI faculty, students, and staff have developed scientific knowledge and innovative technologies in research projects around the globe. Since 1959, DRI’s research has advanced scientific knowledge, supported Nevada’s diversifying economy, provided science-based educational opportunities, and informed policymakers, business leaders, and community members. With campuses in Reno and Las Vegas, DRI is one of eight institutions in the Nevada System of Higher Education. Learn more at www.dri.edu, and connect with us on social media on Facebook, Instagram, and Twitter.