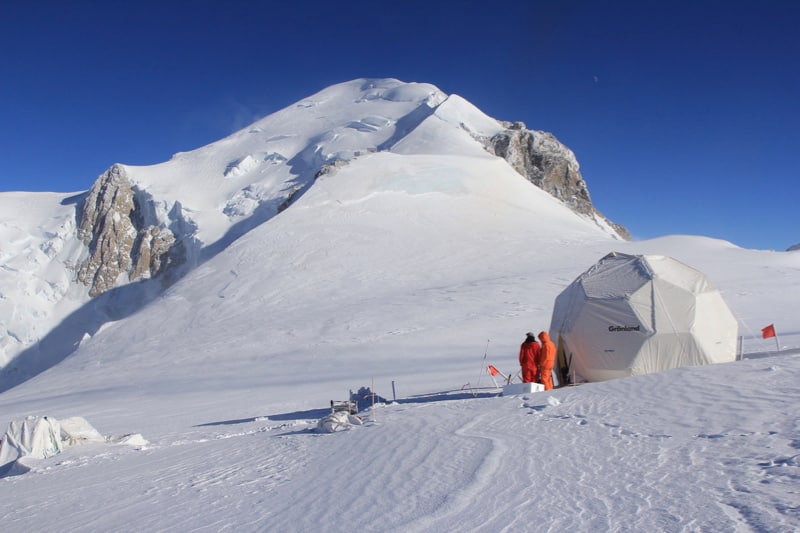 Now working with colleagues at the Institute of Geosciences and the Environment in Grenoble, France, some members of the same research team have published findings that show a related record of pollution in an ice core from the Col du Dôme area of Mont Blanc in the French Alps.

Published in Geophysical Research Letters, the new study reveals significant atmospheric pollution from lead and antimony, another toxic heavy metal. This study is the first to document an ice core record of antimony, showing that Roman-era mining and smelting activities had implications beyond lead contamination. 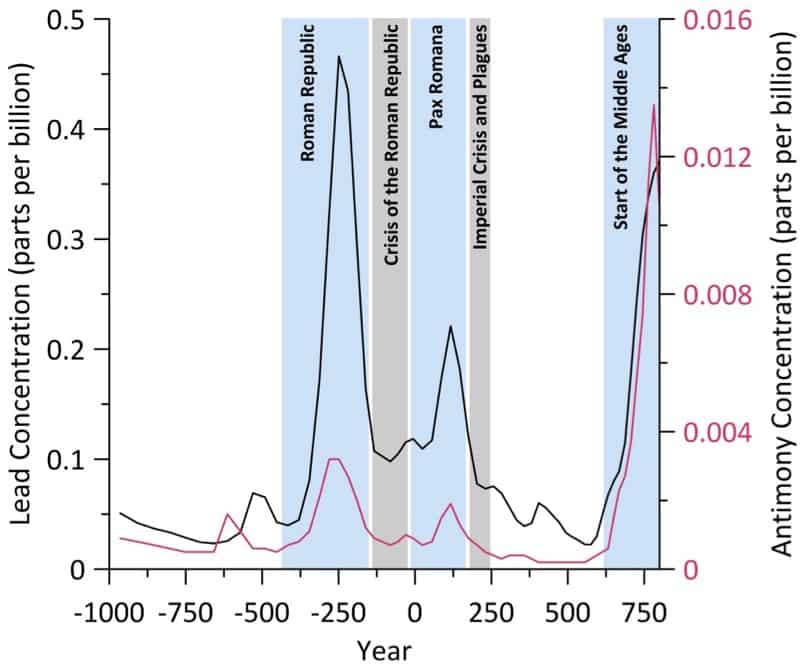 Lead (black) and antimony (red) concentrations in ice from the Col du Dôme (CDD). On the bottom scale, age is indicated in years. Phases of increasing lead emissions were accompanied by a simultaneous rise in the presence of antimony – another toxic metal – in the alpine ice. The increases and decreases in heavy metal concentration in the ice correspond with boom times and crises in Roman-era economic history.

“This is the first study of antiquity-era pollution using Alpine ice,” explained lead author Susanne Preunkert, PhD, of the CNRS Institute of Geosciences and the Environment. “Our record from the Alps provides insight into the impact of ancient emissions on the present-day environment in Europe, as well as a comparison with more recent pollution linked to the use of leaded gasoline in the twentieth century.”

Compared to the lead pollution record obtained from a Greenland ice core in the previous study, which reflects heavy metal emissions from across Europe, the Mont Blanc ice core reflects influences from more local pollution sources.

“This study continues an international collaboration between ice core experts, historians, and atmospheric scientists,” said McConnell. “Cross-disciplinary research like this allows us to interpret the ice record in more detail, leading to a better understanding of the impacts of past human activities on the natural environment while also providing new, more quantitative information on those human activities.”

This research received support from the CNRS, ADEME, and the European Alpclim and Carbosol projects, as well as the Desert Research Institute.

The full study, titled “Lead and Antimony in Basal Ice From Col du Dome (French Alps) Dated With Radiocarbon: A Record of Pollution During Antiquity,” is available here.

François Maginiot of CNRS contributed to this release.