Reno, Nev. (June 22, 2020) – An international team of scientists and historians has found evidence connecting an unexplained period of extreme cold in ancient Rome with an unlikely source: a massive eruption of Alaska’s Okmok volcano, located on the opposite side of the Earth.

Around the time of Julius Caesar’s death in 44 BCE, written sources describe a period of unusually cold climate, crop failures, famine, disease, and unrest in the Mediterranean Region – impacts that ultimately contributed to the downfall of the Roman Republic and Ptolemaic Kingdom of Egypt. Historians have long suspected a volcano to be the cause, but have been unable to pinpoint where or when such an eruption had occurred, or how severe it was.

In a new study published this week in Proceedings of the National Academy of Sciences (PNAS), a research team led by Joe McConnell, Ph.D. of the Desert Research Institute in Reno, Nev. uses an analysis of tephra (volcanic ash) found in Arctic ice cores to link the period of unexplained extreme climate in the Mediterranean with the caldera-forming eruption of Alaska’s Okmok volcano in 43 BCE.

“To find evidence that a volcano on the other side of the earth erupted and effectively contributed to the demise of the Romans and the Egyptians and the rise of the Roman Empire is fascinating,” McConnell said. “It certainly shows how interconnected the world was even 2,000 years ago.” 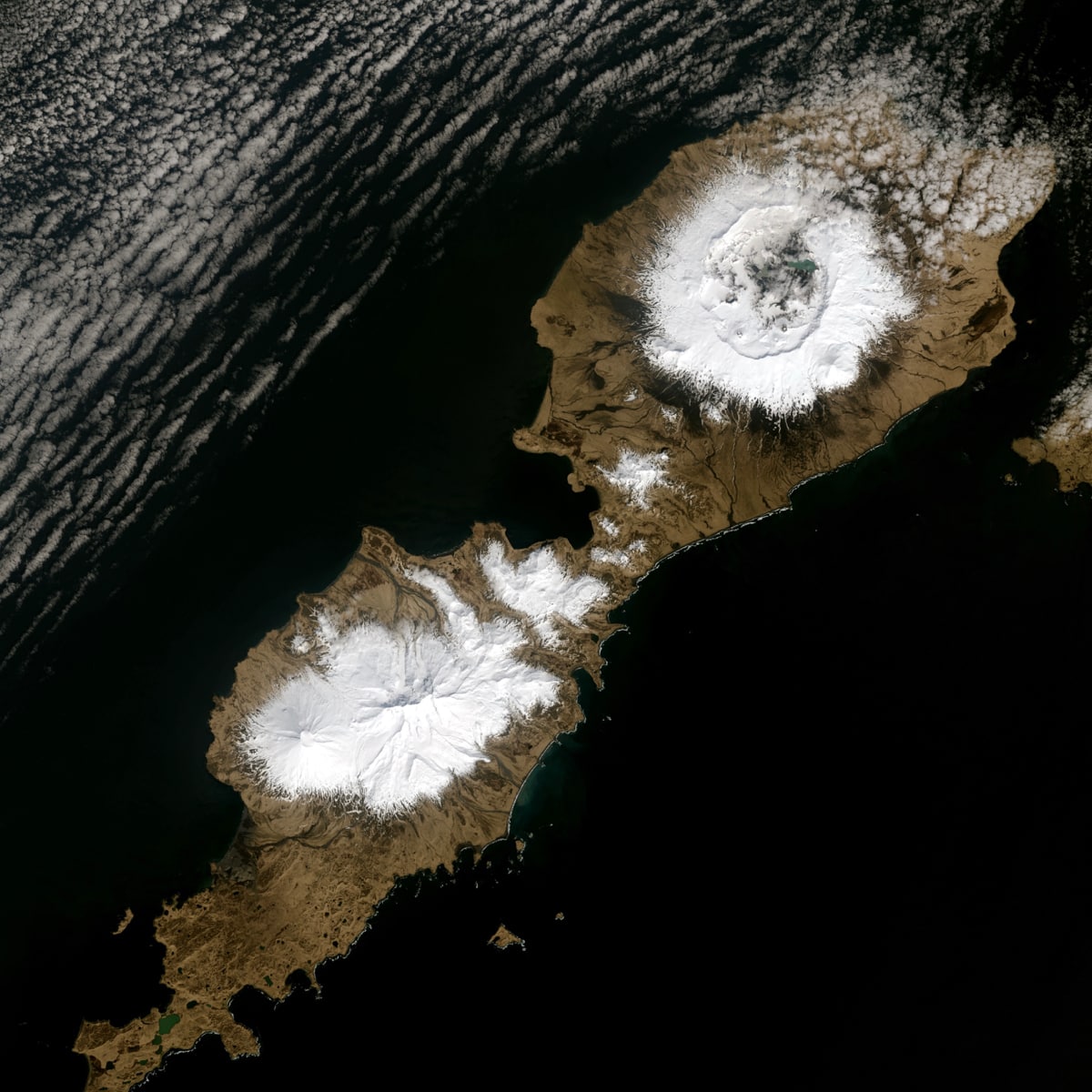 The discovery was initially made last year in DRI’s Ice Core Laboratory, when McConnell and Swiss researcher Michael Sigl, Ph.D. from the Oeschger Centre for Climate Change Research at the University of Bern happened upon an unusually well-preserved layer of tephra in an ice core sample and decided to investigate.

New measurements were made on ice cores from Greenland and Russia, some of which were drilled in the 1990s and archived in the U.S., Denmark, and Germany. Using these and earlier measurements, they were able to clearly delineate two distinct eruptions – a powerful but short-lived, relatively localized event in early 45 BCE, and a much larger and more widespread event in early 43 BCE with volcanic fallout that lasted more than two years in all the ice core records.

The researchers then conducted a geochemical analysis of the tephra samples from the second eruption found in the ice, matching the tiny shards with those of the Okmok II eruption in Alaska – one of the largest eruptions of the past 2,500 years.

“The tephra match doesn’t get any better,” said tephra specialist Gill Plunkett, Ph.D. from Queen’s University Belfast. “We compared the chemical fingerprint of the tephra found in the ice with tephra from volcanoes thought to have erupted about that time and it was very clear that the source of the 43 BCE fallout in the ice was the Okmok II eruption.” 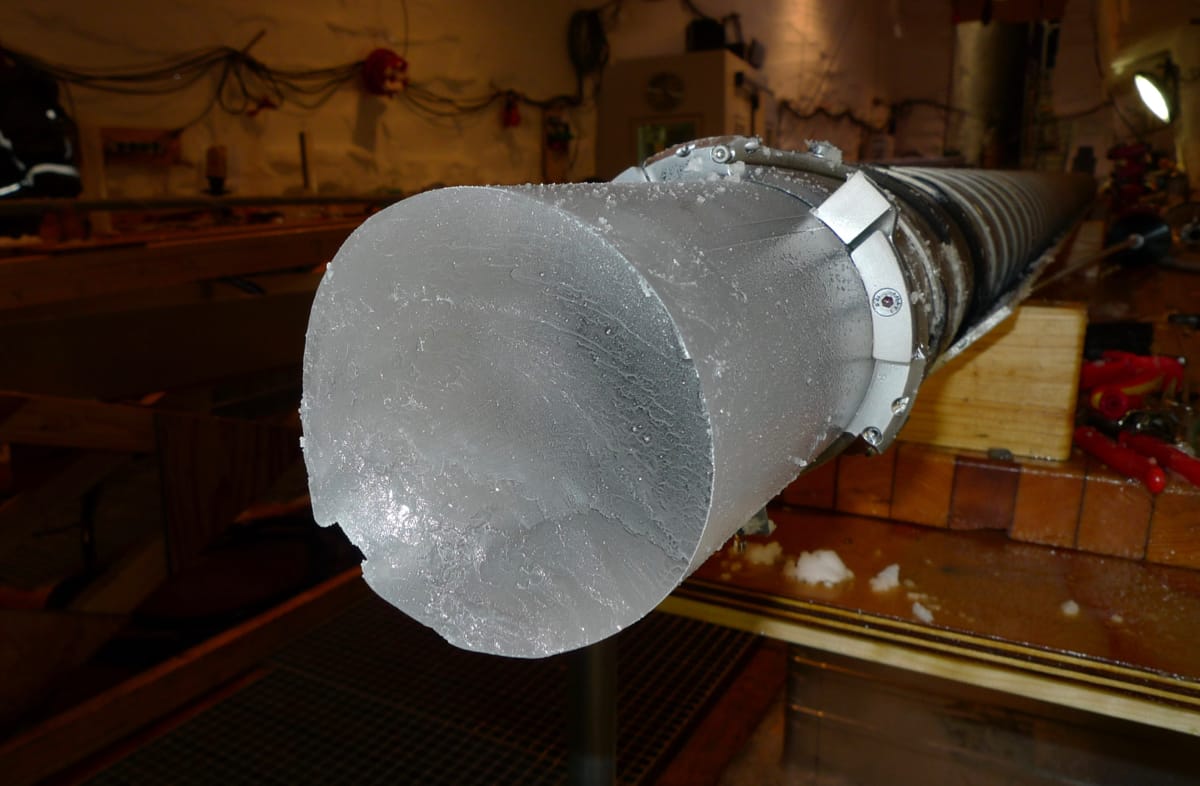 Detailed records of past explosive volcanic eruptions are archived in the Greenland ice sheet and accessed through deep-drilling operations. Credit: Dorthe Dahl-Jensen.

Working with colleagues from the U.K., Switzerland, Ireland, Germany, Denmark, Alaska, and Yale University in Connecticut, the team of historians and scientists gathered supporting evidence from around the globe, including tree-ring-based climate records from Scandinavia, Austria and California’s White Mountains, and climate records from a speleothem (cave formations) from Shihua Cave in northeast China. They then used Earth system modeling to develop a more complete understanding of the timing and magnitude of volcanism during this period and its effects on climate and history.

According to their findings, the two years following the Okmok II eruption were some of the coldest in the Northern Hemisphere in the past 2,500 years, and the decade that followed was the fourth coldest. Climate models suggest that seasonally averaged temperatures may have been as much as 7oC (13oF) below normal during the summer and autumn that followed the 43 BCE eruption of Okmok, with summer precipitation of 50 to 120 percent above normal throughout Southern Europe, and autumn precipitation reaching as high as 400 percent of normal.

“In the Mediterranean region, these wet and extremely cold conditions during the agriculturally important spring through autumn seasons probably reduced crop yields and compounded supply problems during the ongoing political upheavals of the period,” said classical archaeologist Andrew Wilson, D.Phil. of the University of Oxford. “These findings lend credibility to reports of cold, famine, food shortage and disease described by ancient sources.”

“Particularly striking was the severity of the Nile flood failure at the time of the Okmok eruption, and the famine and disease that was reported in Egyptian sources,” added Yale University historian Joe Manning, Ph.D.  “The climate effects were a severe shock to an already stressed society at a pivotal moment in history.” 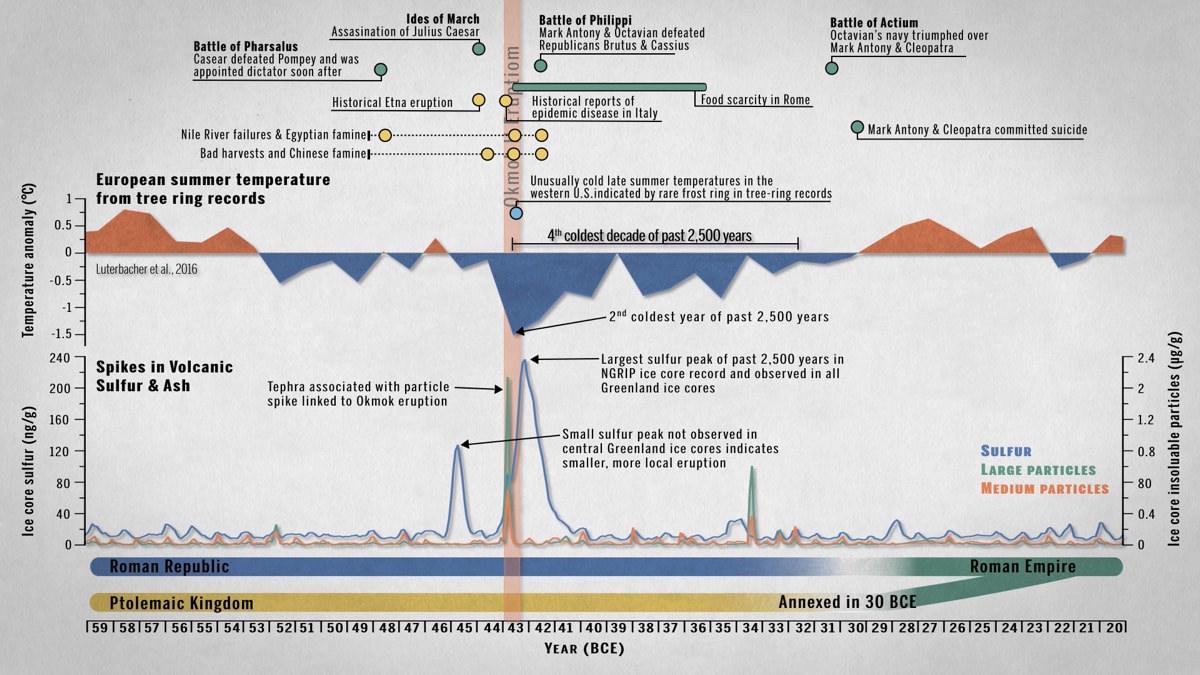 Timeline showing European summer temperatures and volcanic sulphur and ash levels in relation to the Okmok II Eruption and significant historic events of the Roman Republic and Ptolemaic Kingdom from 59 to 20 BCE.

Volcanic activity also helps to explain certain unusual atmospheric phenomena that were described by ancient Mediterranean sources around the time of Caesar’s assassination and interpreted as signs or omens – things like solar halos, the sun darkening in the sky, or three suns appearing in the sky (a phenomenon now known as a parahelia, or ‘sun dog’). However, many of these observations took place prior to the eruption of Okmok II in 43 BCE, and are likely related to a smaller eruption of Mt. Etna in 44 BCE.

Although the study authors acknowledge that many different factors contributed to the fall of the Roman Republic and Ptolemaic Kingdom, they believe that the climate effects of the Okmok II eruption played an undeniably large role – and that their discovery helps to fill a knowledge gap about this period of history that has long puzzled archaeologists and ancient historians.

“People have been speculating about this for many years, so it’s exciting to be able to provide some answers,” McConnell said.

To view the full text of the article “Extreme climate after massive eruption of Alaska’s Okmok volcano in 43 BCE and effects on the late Roman Republic and Ptolemaic Kingdom”  in PNAS, please visit:  [add link]