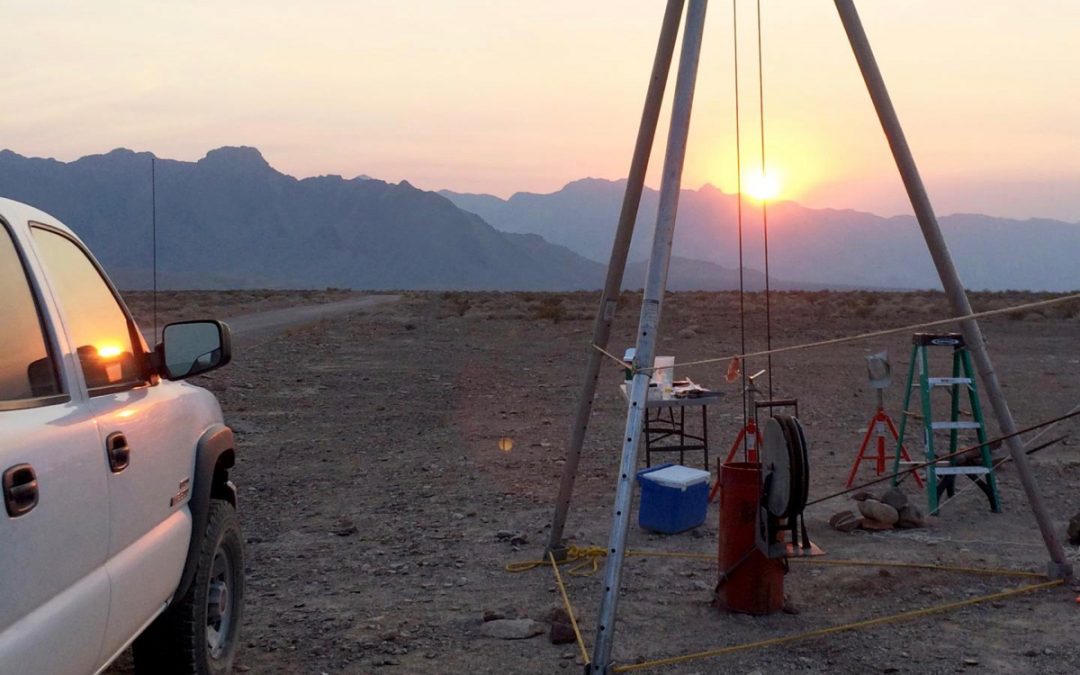 Las Vegas, Nev. (April 15, 2021) – Although certain microbes have the ability to evolve very quickly, the opposite can also be true, according to new research from an international team of scientists including Duane Moser, Ph.D., Joshua Sackett, Ph.D., and Brittany Kruger, Ph.D. of the Desert Research Institute (DRI) in Las Vegas. The new paper, which was led by scientists from the Bigelow Laboratory for Ocean Sciences and published last week in Nature publishing group’s ISME Journal, identifies a group of microbes from the deepest regions of the continental subsurface biosphere that have been at an evolutionary standstill for approximately 175 million years.

The study used partial genomes of the microbe, Candidatus Desulforudis audaxviator that were collected from deep underground in South Africa, Siberia, and California. Moser contributed the North American samples, which were collected in 2015 at a depth of 752 m (2,467 ft.) during activities of the NASA Astrobiology Institute’s Life Underground project (Jan Amend, USC, PI) from the Death Valley Regional Flow System, a vast fractured rock aquifer that underlies portions of Nevada and Eastern CA. The North America re-discovery of D. audaxviator brings an old story full-circle for Moser in that he also collected the samples from which the organism was originally described from fracture networks as much as 4 – 5 km (2.5 – 3.1 miles) deep in South Africa while a postdoc with TC Onstott at Princeton University in the early 2000s.

The full text of the paper, Evolutionary stasis of a deep subsurface microbial lineage, is available from ISME Journal: https://www.nature.com/articles/s41396-021-00965-3

The press release below is reposted with permission from Bigelow Laboratory for Ocean Sciences.

It’s like something out of science fiction. Research led by Bigelow Laboratory for Ocean Sciences has revealed that a group of microbes, which feed off chemical reactions triggered by radioactivity, have been at an evolutionary standstill for millions of years. The discovery could have significant implications for biotechnology applications and scientific understanding of microbial evolution.

“This discovery shows that we must be careful when making assumptions about the speed of evolution and how we interpret the tree of life,” said Eric Becraft, the lead author on the paper. “It is possible that some organisms go into an evolutionary full-sprint, while others slow to a crawl, challenging the establishment of reliable molecular timelines.”

Becraft, now an assistant professor of biology at the University of Northern Alabama, completed the research as part of his postdoctoral work at Bigelow Laboratory and recently published it in the Nature publishing group’s ISME Journal.

The microbe, Candidatus Desulforudis audaxviator, was first discovered in 2008 by a team of scientists, led by Tullis Onstott, a co-author on the new study. Found in a South African gold mine almost two miles beneath the Earth’s surface, the microbes acquire the energy they need from chemical reactions caused by the natural radioactive decay in minerals. They inhabit water-filled cavities inside rocks in a completely independent ecosystem, free from reliance on sunlight or any other organisms.

Because of their unique biology and isolation, the authors of the new study wanted to understand how the microbes evolved. They searched other environmental samples from deep underground and discovered Candidatus Desulforudis audaxviator in Siberia and California, as well as in several additional mines in South Africa. Since each environment was chemically different, these discoveries gave the researchers a unique opportunity to look for differences that have emerged between the populations over their millions of years of evolution.

“We wanted to use that information to understand how they evolved and what kind of environmental conditions lead to what kind of genetic adaptations,” said Bigelow Laboratory Senior Research Scientist Ramunas Stepanauskas, the corresponding author on the paper and Becraft’s postdoctoral advisor. “We thought of the microbes as though they were inhabitants of isolated islands, like the finches that Darwin studied in the Galapagos.” 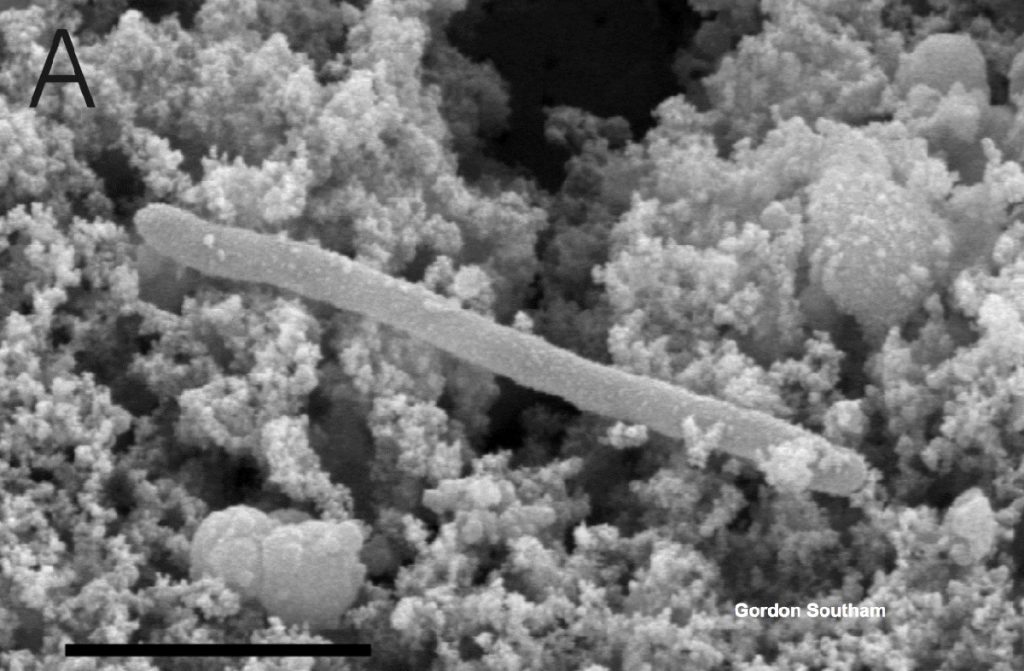 Using advanced tools that allow scientists to read the genetic blueprints of individual cells, the researchers examined the genomes of 126 microbes obtained from three continents. Surprisingly, they all turned out to be almost identical.

“It was shocking,” Stepanauskas said. “They had the same makeup, and so we started scratching our heads.”

Scientists found no evidence that the microbes can travel long distances, survive on the surface, or live long in the presence of oxygen. So, once researchers determined that there was no possibility the samples were cross-contaminated during research, plausible explanations dwindled.

“The best explanation we have at the moment is that these microbes did not change much since their physical locations separated during the breakup of supercontinent Pangaea, about 175 million years ago,” Stepanauskas said. “They appear to be living fossils from those days. That sounds quite crazy and goes against the contemporary understanding of microbial evolution.”

What this means for the pace of microbial evolution, which often happens at a much more accelerated rate, is surprising. Many well-studied bacteria, such as E. coli, have been found to evolve in only a few years in response to environmental changes, such as exposure to antibiotics.

Stepanauskas and his colleagues hypothesize the standstill evolution they discovered is due to the microbe’s powerful protections against mutation, which have essentially locked their genetic code. If the researchers are correct, this would be a rare feature with potentially valuable benefits.

Microbial enzymes that create copies of DNA molecules, called DNA polymerases, are widely used in biotechnology. Enzymes with high fidelity, or the ability to recreate themselves with little differences between the copy and the original, are especially valuable.

“There’s a high demand for DNA polymerases that don’t make many mistakes,” Stepanauskas said. “Such enzymes may be useful for DNA sequencing, diagnostic tests, and gene therapy.”

Beyond potential applications, the results of this study could have far-reaching implications and change the way scientists think about microbial genetics and the pace of their evolution.

“These findings are a powerful reminder that the various microbial branches we observe on the tree of life may differ vastly in the time since their last common ancestor,” Becraft said. “Understanding this is critical to understanding the history of life on Earth.”

Bigelow Laboratory for Ocean Sciences is an independent, nonprofit research institute located in East Boothbay, Maine. From the Arctic to the Antarctic, Bigelow Laboratory scientists use innovative approaches to study the foundation of global ocean health and unlock its potential to improve the future for all life on the planet. Learn more at bigelow.org, and join the conversation on Facebook, Instagram, and Twitter.