Meet DRI scientist Nathan Chellman and learn about his work in the Ice Core Laboratory in this interview with DRI’s Behind the Science Blog.

Nathan Chellman, Ph.D., is a postdoctoral fellow with the Division of Hydrologic Sciences at the Desert Research Institute (DRI) in Reno, Nev. He specializes in the collection, processing and analysis of ice cores — cylindrical samples of ice drilled from glaciers and ice sheets around the world. Nathan grew up in Reno, and holds a B.Sc. in Geology/Biology from Brown University, and M.S. and Ph.D. degrees in Hydrology from the University of Nevada, Reno. He first worked at DRI as a high school intern in 2008, then later returned to DRI during and after college to work with Joe McConnell in the Ice Core Lab. He received his helicopter private pilot license in 2014 and volunteered as an EMT while he was an undergraduate. In his free time, Nathan enjoys running, skiing, and backpacking in the Sierras and central Nevada. 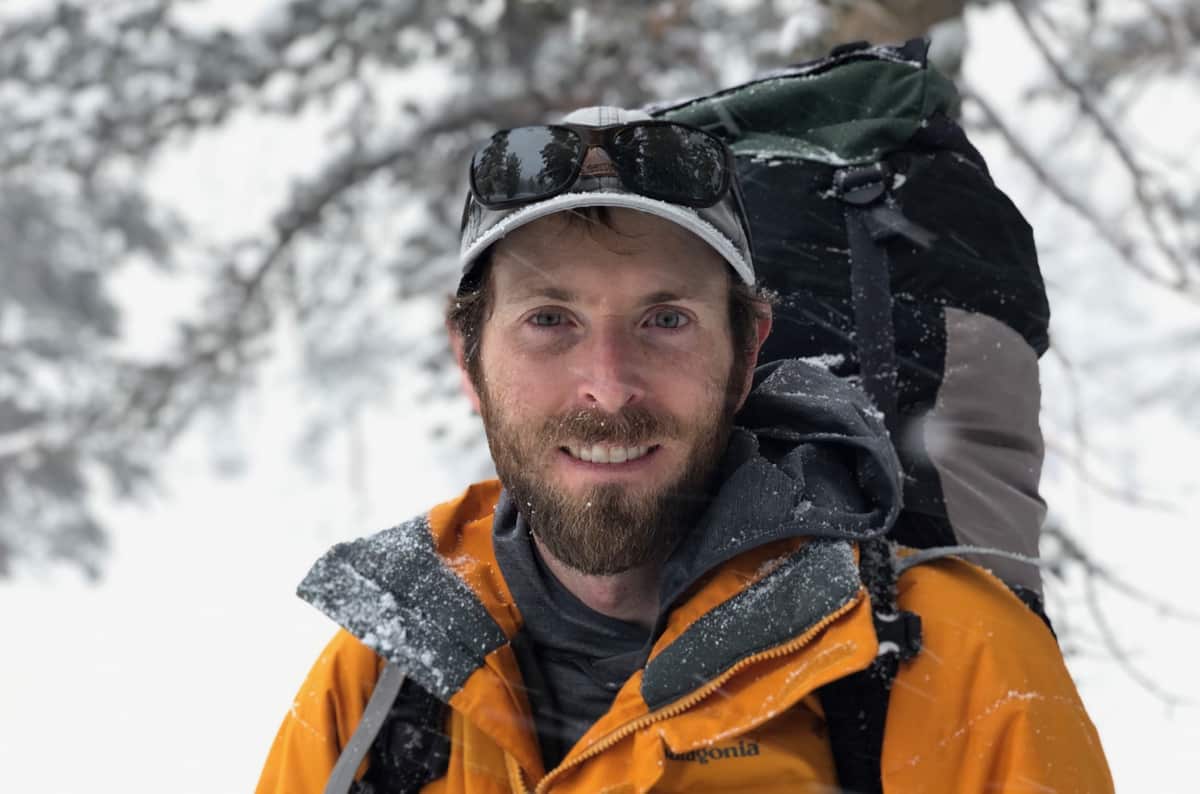 Nathan Chellman, Ph.D., is a postdoctoral fellow with the Division of Hydrologic Sciences at the Desert Research Institute in Reno.

Chellman: I work in the Ice Core Lab, where we do analyses and measurements on snow and ice from polar and alpine regions to learn about how the environment has changed over the past several centuries and millennia. I also do some work with tree rings and sediment cores from areas a little closer to home, like the Rocky Mountains, primarily looking at pollution and climate reconstructions.

DRI: What does an ice core look like, and how do you collect one?

Chellman: An ice core is a long, narrow cylinder of ice. To recover an ice core from an ice sheet or a glacier we use an ice core drill, which is a hollow tube with sharp cutters at one end and a big motor at the top. The motor spins the hollow tube, the cutters cut the ice away, and the ice core then ends up in the center of the hollow tube. You send the ice core drill down through the ice about 1 meter (3 feet) at a time, bring up the entire drill with an ice core inside, push the ice core out of the hollow drill section, send the drill back down the borehole, and then repeat that until you’re the whole way through the ice feature. For polar ice cores, we sometimes drill down hundreds of meters. So, we end up with hundreds or thousands of those meter-long sections back-to-back that represent a whole profile through the ice. 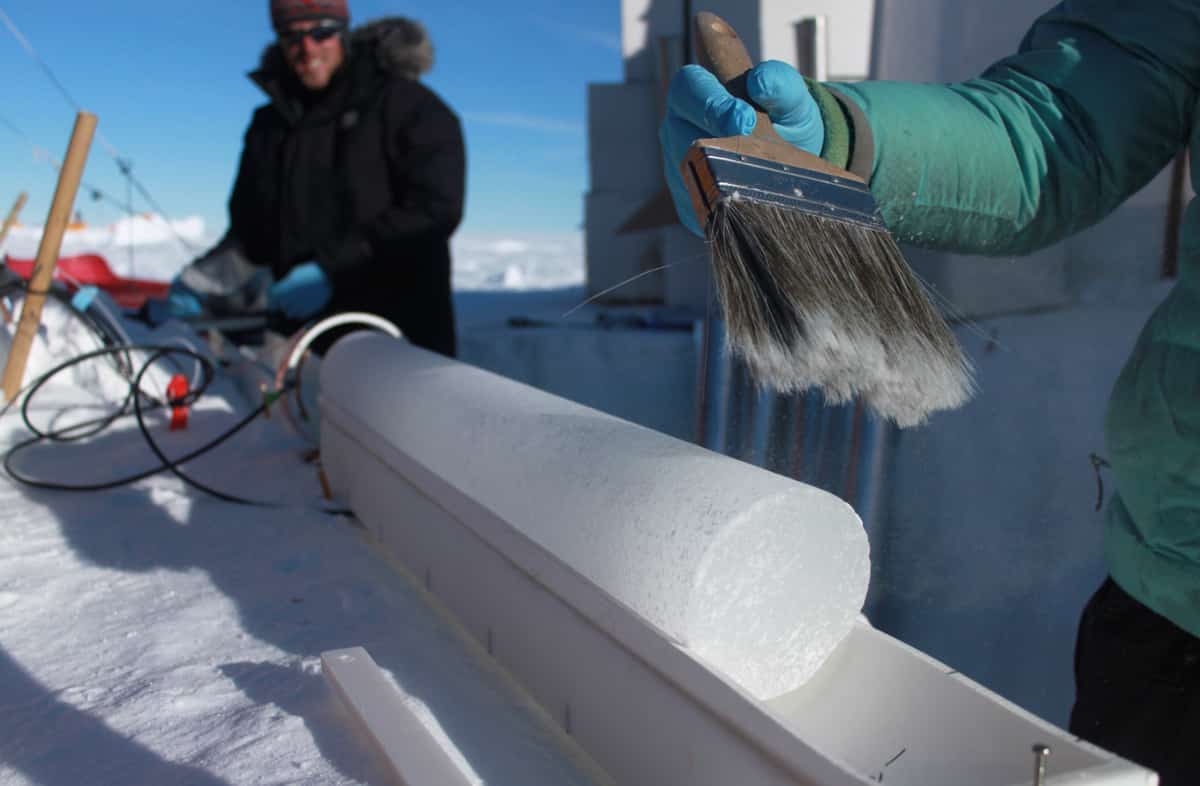 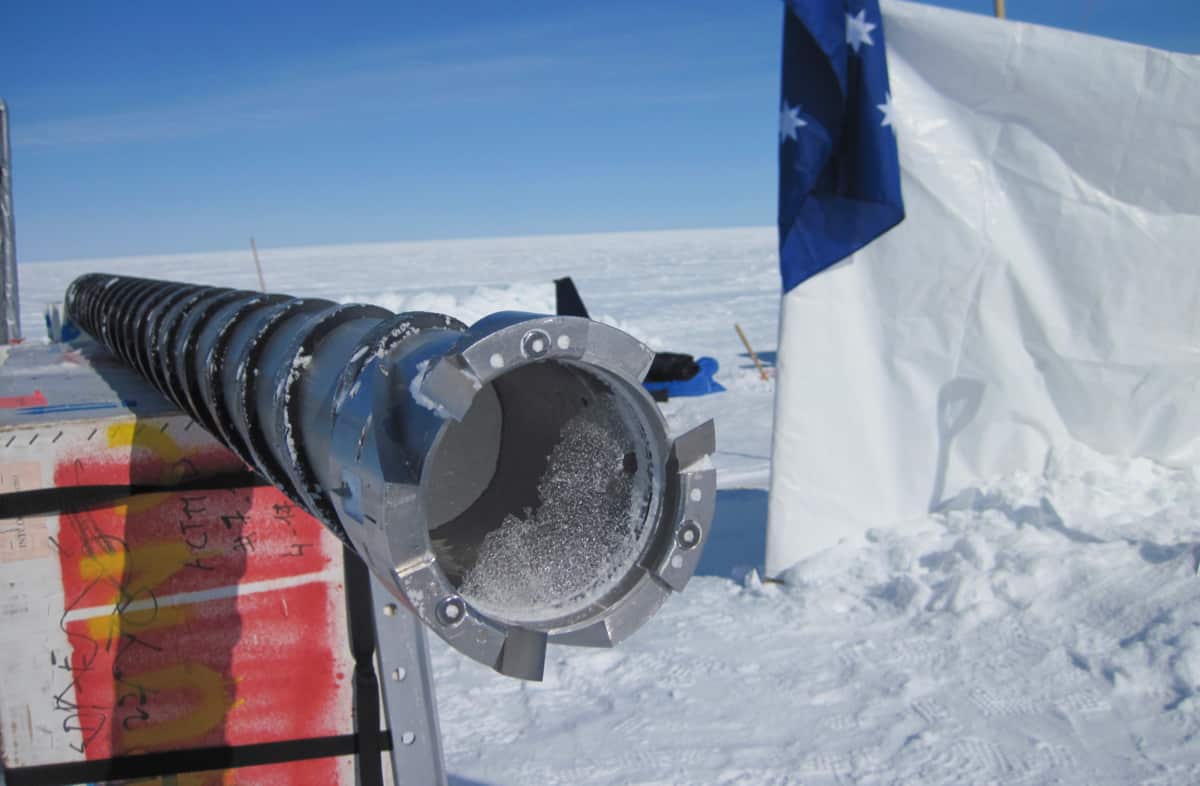 Above, left: Researchers process an ice core sample collected from a glacier in Greenland. Above, right: Closeup of an ice core drill.

DRI: What can you learn from all of these samples of ice? Can you tell us about one of your projects?

Chellman: One of my favorite projects right now is a study on some really old ice patches in Wyoming. These ice patches are about the size of a football field or smaller, so they are too small to be glaciers. They look just like little remnant snow patches that you might see in the Sierra Nevada if you go out hiking in the late summer. However, they’re not snowdrifts, they’re actual ice – and some of these ice patches are turning out to be thousands and thousands of years old.

I was invited to join the project by a group of archaeologists and climate scientists who were interested in looking at how old the ice patches were, and studying the organic debris inside of them and the artifacts that were melting out around the edges. They didn’t know what to do with the ice itself, but since we specialize in measuring ice chemistry, I volunteered to go to their field site when they were drilling through a shallow ice patch and bring some ice back to DRI. Those samples ended up being a very nice record of ice chemistry. The ice patch turned out to be 10,000 years old at the bottom, with about 30 organic layers cutting through the ice.

Normally in an ice core project, if you have dirt and organic layers in your ice core you’ve done something terribly wrong. In this case, the dirt was the key to unlocking how old the ice patch was, since the age of the organic material can be accurately dated. It turned out that the chemistry of the ice was really interesting as well, and preserved some climate information going back over ten thousand years. You can see distinct warm and cold periods that paralleled lake sediment records from nearby, and also some anthropological records of population. So, that suggested that people living in the area were affected by the general climate conditions as indicated by the ice patch chemistry. 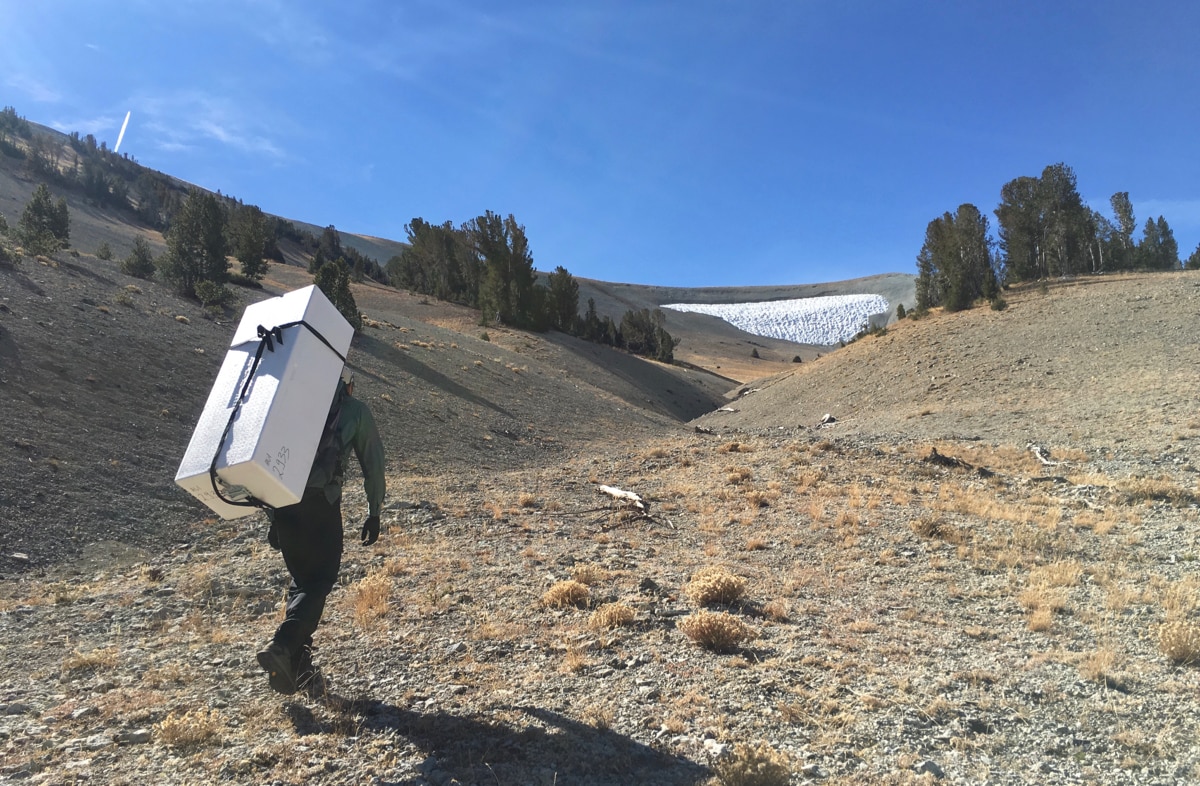 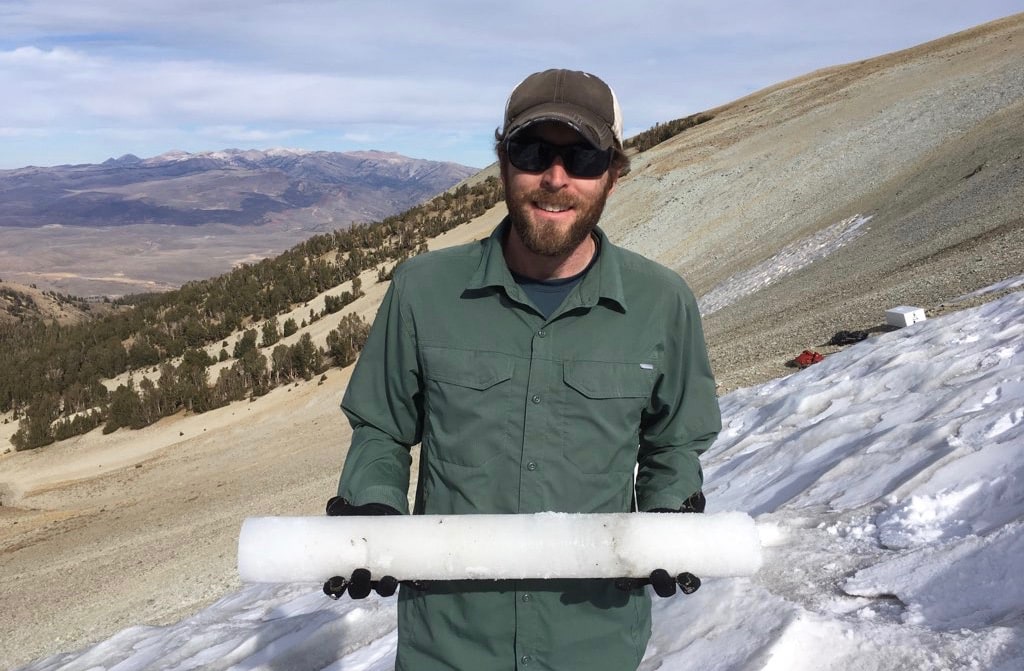 Above, left: Nathan Chellman carries ice coring equipment to an alpine ice patch, where he and his colleagues are using ice core records from an isolated ice patch to learn about ancient climate in the region. Above, right: Chellman holds an ice core sample collected from an alpine ice patch.

DRI: Have you ever been part of a polar drilling operation?

Chellman: Yes, in 2013 I was in northeastern Greenland. That year we recovered a 212-meter ice core, which went back about 1,700 years. It took about two weeks working normal 8- or 10-hour days – but as you drill deeper and deeper into the ice, it takes longer and longer for the drill to go up and down the borehole. On the first day you can go about 20 meters in a day, and the next day you can go a little less, and by the end you’re only drilling 6 to 10 meters per day because it takes so long for the drill to go up and down the hole.

The first day was terrifying. The plane landed out in the middle of the ice sheet, hundreds of miles from any other camps or bases. The pilot dropped us and our gear out in the snow, and then took off and left. Help was a few days away at best, so we had to just get working and get camp set up before everything blew away, because it’s always windy there. There were no buildings, no infrastructure, just us and our camping gear. We had personal sleeping tents (we each used two sleeping bags!), a kitchen tent, and a science tent, as well as plenty of food, Coleman stoves for cooking, and the ice core drill.

DRI: What were the working conditions like in Greenland?

Chellman: The strangest part about working in Greenland during the summer is that it’s never night. The sun never completely goes down, even at night. The sun goes low on the horizon and it gets colder, but it’s never actually dark. It’s a little disorienting at first. You have to sleep with eye covers or pull your hat down over your eyes so you can pretend like you’re in a little bit of darkness.

It was also really cold. Between -25 and -35C (-13 to -31F) at night, and anywhere between -5 and -15C (23F to 5F) during the day. When it’s that cold, it’s really interesting because you have to consider that everything is going to be frozen. Your toothpaste is going to be frozen, if you leave your water in a mug it’s going to be frozen. It requires some adaptations from a lifestyle perspective to make sure what you need isn’t going to be a total block of ice. 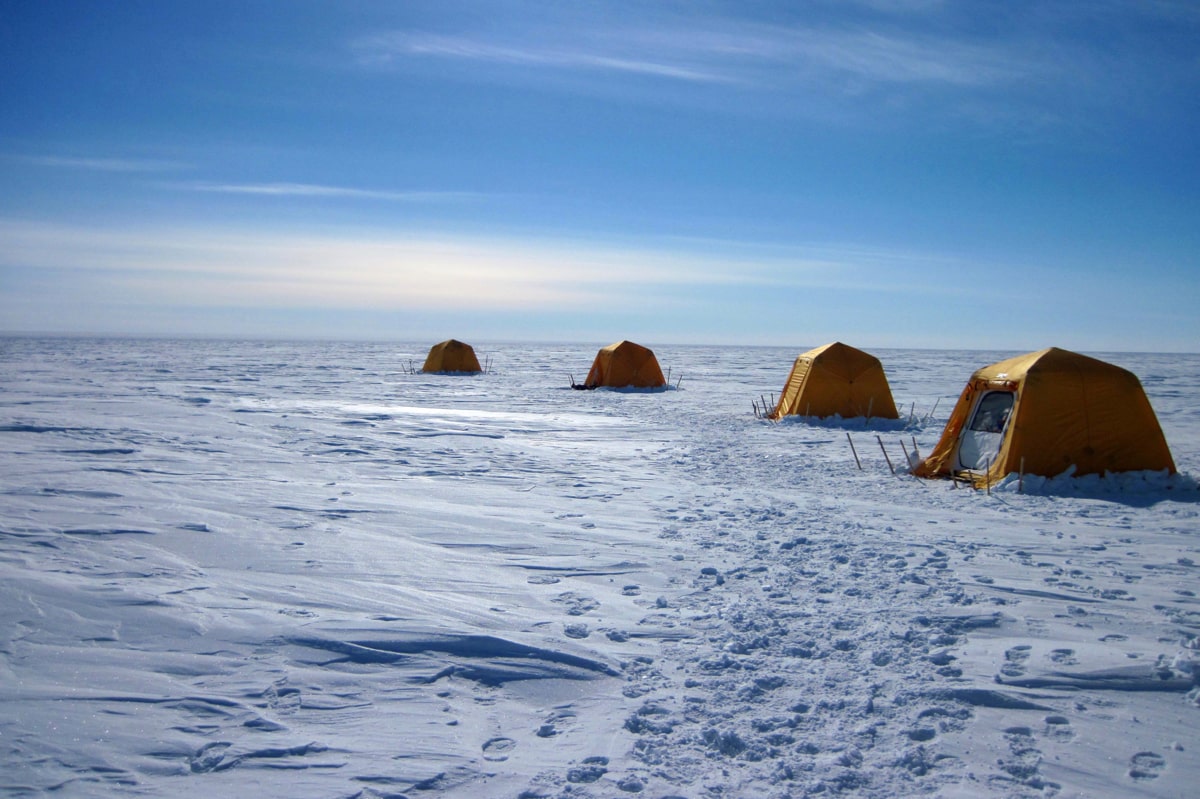 In 2013, Chellman and his colleagues traveled to northeastern Greenland to collect a 212-meter ice core that went back 1,700 years. Their field camp is pictured here.

DRI: Do you have any plans to return?

Chellman: We were supposed to go back last year to that same place in Greenland and get an ice core that was twice as long, but that was postponed. We’re rescheduling for this spring, but everything is still very much up in the air. If we go, we’ll be gathering data for a study that is trying to understand pollution from ancient societies. For example, we will be looking to see if we can detect Bronze Age pollution from 2,000-3,000 years ago in the ice. The pollution would have been caused by mining and smelting of metals.

DRI: It sounds like you have a very exciting job. What do you like best about what you do?

Chellman: One of my favorite things is actually being in the lab and making the measurements, and taking all the time to make sure everything is running right, and that the analytical system and all the instruments are making high-quality measurements. When you’re analyzing ice cores, you have to be consistent day to day and week to week, since sometimes it can take a month or two to analyze all the samples from an ice core. But it’s really fun to get in the groove in the lab, run long days, and generate really consistent, nice datasets. There’s a lot of troubleshooting involved, but once the system is running smoothly, it’s really amazing to be able to generate unique, one-of-a-kind data that can be trusted to inform really big picture questions.

For more information on Nathan Chellman and his research, please visit: https://www.dri.edu/directory/nathan-chellman/ 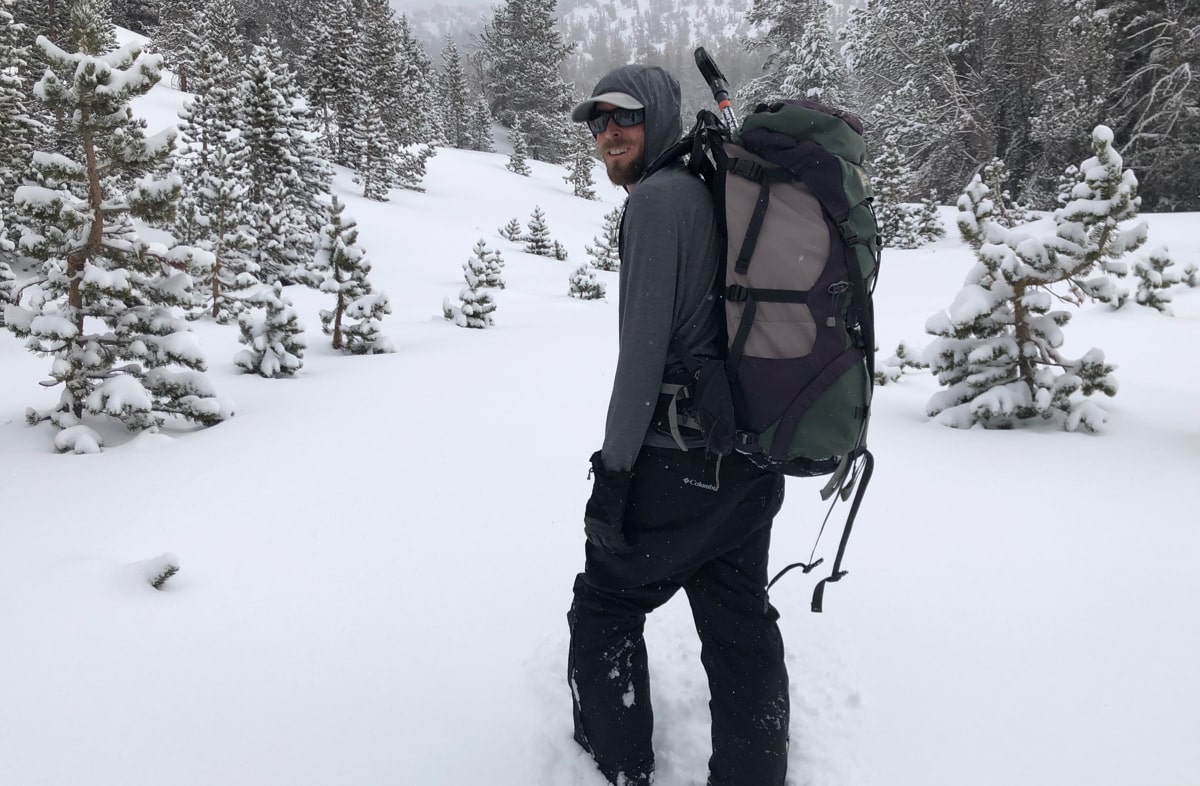