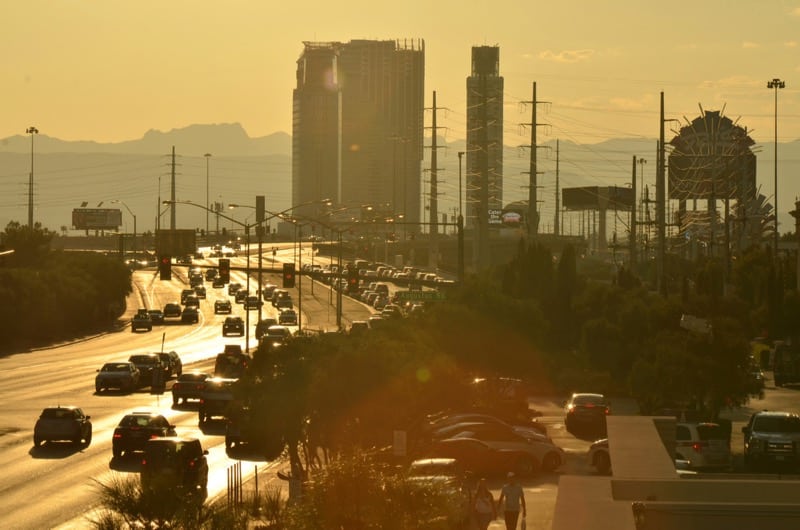 Photo: Hotter temperatures and longer, more frequent heat waves are linked to a rising number of deaths in the Las Vegas Valley over the last 10 years.

“Current climate change projections show an increased likelihood of extreme temperature events in the Las Vegas area over the next several years,” explained Erick Bandala, Ph.D., assistant research professor at DRI and lead author on the study. “Understanding recent extreme heat trends and their relationship to health hazards is essential to protecting vulnerable populations from risk in the future.” 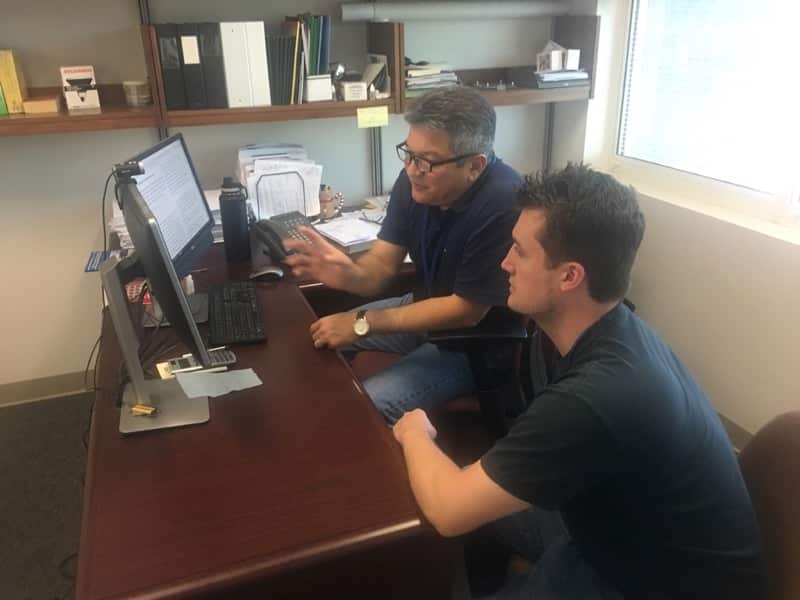 Erick Bandala, PhD (left), shows a graduate student the data he and his team analyzed for this study.

Urban areas of the Southwest are of particular concern because several factors compound the health-related risks of extreme heat events. The heat-absorbing properties of common materials like asphalt exacerbate already high temperatures in cities (called the urban heat island effect), particularly at night. What’s more, populations in cities like Las Vegas are growing rapidly, especially among those 55 and older, which means that more and more people are exposed to risk.

In this study, the research team analyzed two measures of extreme heat—heat index and excess heat factor—for the Las Vegas metropolitan area in the June, July, and August months from 2007 to 2016. Heat index (HI) accounts for how the human body reacts to surface temperature and relative humidity. Excess heat factor measures (EHF) heat wave intensity in relation to historic temperature trends to account for how acclimated the public is to a given temperature threshold. Because both HI and EHF incorporate the human body’s response to extreme heat, they are ideal metrics for assessing public health impacts, and both were shown to rise over the study period.

Heat Index (HI) and Excess Heat Factor (EHF) are metrics that go beyond just temperature to also account for the human body’s response to heat. This study found that rising trends in these measures tracked closely with the number of heat-related deaths in Las Vegas.

“From 2007 to 2016, there have been 437 heat-related deaths in Las Vegas, with the greatest number of those deaths occurring in 2016,” explained Bandala. “Interestingly, 2016 also shows one of the highest heat index measures over the last 35 years. This shows a clear relationship between increasingly intense heat events in our area and public health effects.”

Bandala’s team found that the subpopulation particularly at risk of heat-related deaths is adults over 50 years old—76% of the heat-related deaths in the study period were individuals in this subpopulation. Of the deaths in this group, almost all individuals also showed evidence of pre-existing heart disease. Researchers note that these findings are highly significant given that the population of adults over 50 in Las Vegas is increasing, with more retirees choosing Clark County as a retirement destination.

Only 23% of heat related deaths occurred in the subpopulation of adults aged 20 to 50 years; interestingly, the most common pre-existing condition for this group was drug and alcohol use. More research is needed to understand how heat is impacting this segment of the population, Bandala noted, because though the number of deaths in this group is comparatively smaller, it is still nearly one quarter of heat-related deaths in the Las Vegas Valley. Additionally, this subpopulation includes economically active adults.

With more intense, more frequent, and longer lasting heat events projected in the coming years, the research team hopes that the trends identified in this study can assist local decision-makers in taking steps to protect the most vulnerable groups in Las Vegas.

“This research helps us better understand the connection between the climate changes we’ve experienced in Las Vegas and their impact to public health over the last 35 years,” Bandala said. “Ideally, this data analysis will help our community adapt to the changes yet to come.”

The full study, titled “Extreme heat and mortality rates in Las Vegas, Nevada: inter-annual variations and thresholds”, is published in the International Journal of Environmental Science and Technology. The study abstract and references are available here: https://link.springer.com/article/10.1007%2Fs13762-019-02357-9

This study is based on work supported in part by the National Science Foundation, NASA, and the Desert Research Institute. Other members of the project team include Kebret Kebede, Nikole Jonsson, Rebecca Murray, and Destiny Green, all of Nevada State College; John Mejia of DRI; and Polioptro Martinez Austria of the Universidad de Las Americas Puebla.