Above: Vulpinic acid sits on a lab bench next to several lichen species.

High radiation on Mars is one of the many reasons the Red Planet seems inhospitable. Two chemistry professors from the University are using solutions from early Earth to solve that problem on Mars.

What do a fungus, a bacterium and an astronaut all have in common? They all need protection from ultraviolet radiation, especially if they’re living on Mars. Researchers at the University of Nevada, Reno in collaboration with Henry Sun of the Desert Research Institute and Christopher McKay of the NASA Ames Research Center received a NASA Established Program to Stimulate Competitive Research (EPSCoR) seed grant to study how they can mimic biology to make some powerful sunscreen.

Lichens are the colorful green moss-like growths found on rocks and trees throughout the Sierras (in fact, Tanzil Mahmud, a graduate student working on this project, went on a hike in Oregon and collected some lichen for the lab). While they appear to be a single organism, lichens are the result of a symbiotic relationship between bacteria and fungi forming a composite organism. Ultraviolet radiation can be harmful to plants if it’s too energetic, so these uniquely bonded organisms evolved a “sunscreen” to protect themselves.

The “sunscreen” is a pigment that is produced by either the bacteria or the fungi. Different species evolved the pigment on their own, suggesting that they were vital to survival in early Earth’s atmosphere. The researchers hypothesize that the absorbed radiation is dissipated in the pigment and transferred into vibrational energy, which dissipates to the environment as heat. 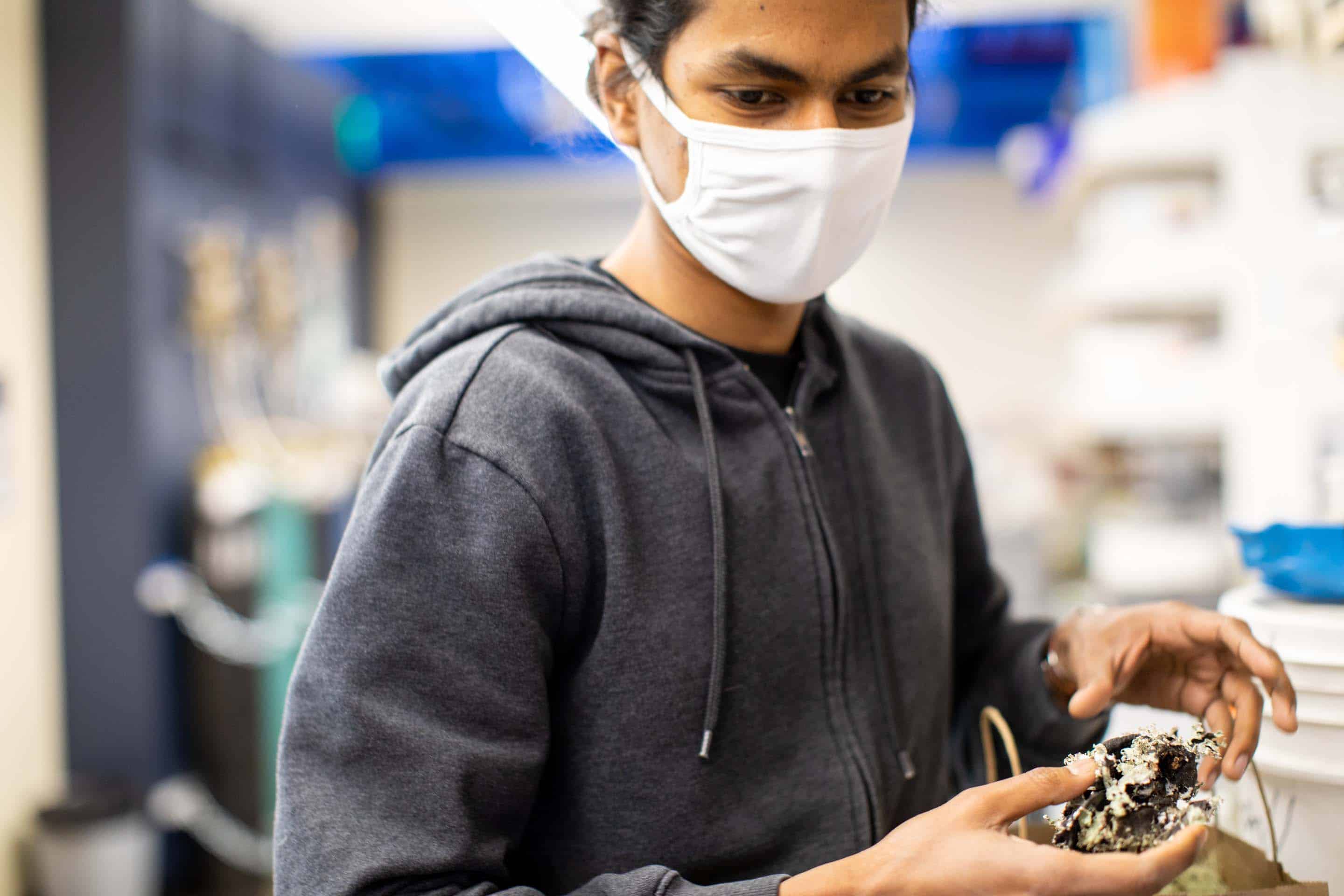 Tanzil Mahmud is a graduate student in Christopher Jeffrey’s lab. He is shown holding a lichen he collected for the lab on a hiking trip in Oregon.

Billions of years ago, when Earth’s atmosphere wasn’t as protective as it is now, cyanobacteria had to protect themselves from intense ultraviolet radiation—the same radiation astronauts would be exposed to on Mars. The bacteria evolved pigments that absorbed that harsh radiation and protected the cells. It is believed that these bacteria also photosynthesized and produced oxygen, thus building the ozone layer, which now protects us from the sun’s harsh radiation.

The idea of microbial sunscreens came from Sun. Sun is a molecular microbiologist and an expert on life found in extremely harsh conditions. He noticed the lichen in places like Florida or the Amazon have very green coloration, but that lichens in the desert have different colors. This led Sun to wonder what the pigments did for the lichen.

“The pigment is only in the outer layer. I came to the realization that the pigment has nothing to do with photosynthesis. It must be related to shielding the UV,” Sun said. That’s when he reached out to Matthew Tucker, an associate professor in the Department of Chemistry. Tucker suggested he and Sun meet with associate professor Christopher Jeffrey, also from the Department of Chemistry, and Sun’s curiosity about the pigment spread quickly. The researchers started to design an experiment to determine if and how the pigments evolved to shield the lichen from the sun’s radiation.

Harvesting compounds…then blasting them with radiation

Jeffrey studies the diversity of secondary metabolites, which can perform many different functions in an organism and are often very specific to a species. And as Jeffrey emphasizes, they’re not secondary because they’re unimportant. Using synthetic chemistry and analytical tools, Jeffrey studies secondary metabolites, such as the pigments, with the goal of understanding their relationship to other molecules and to the organism itself. 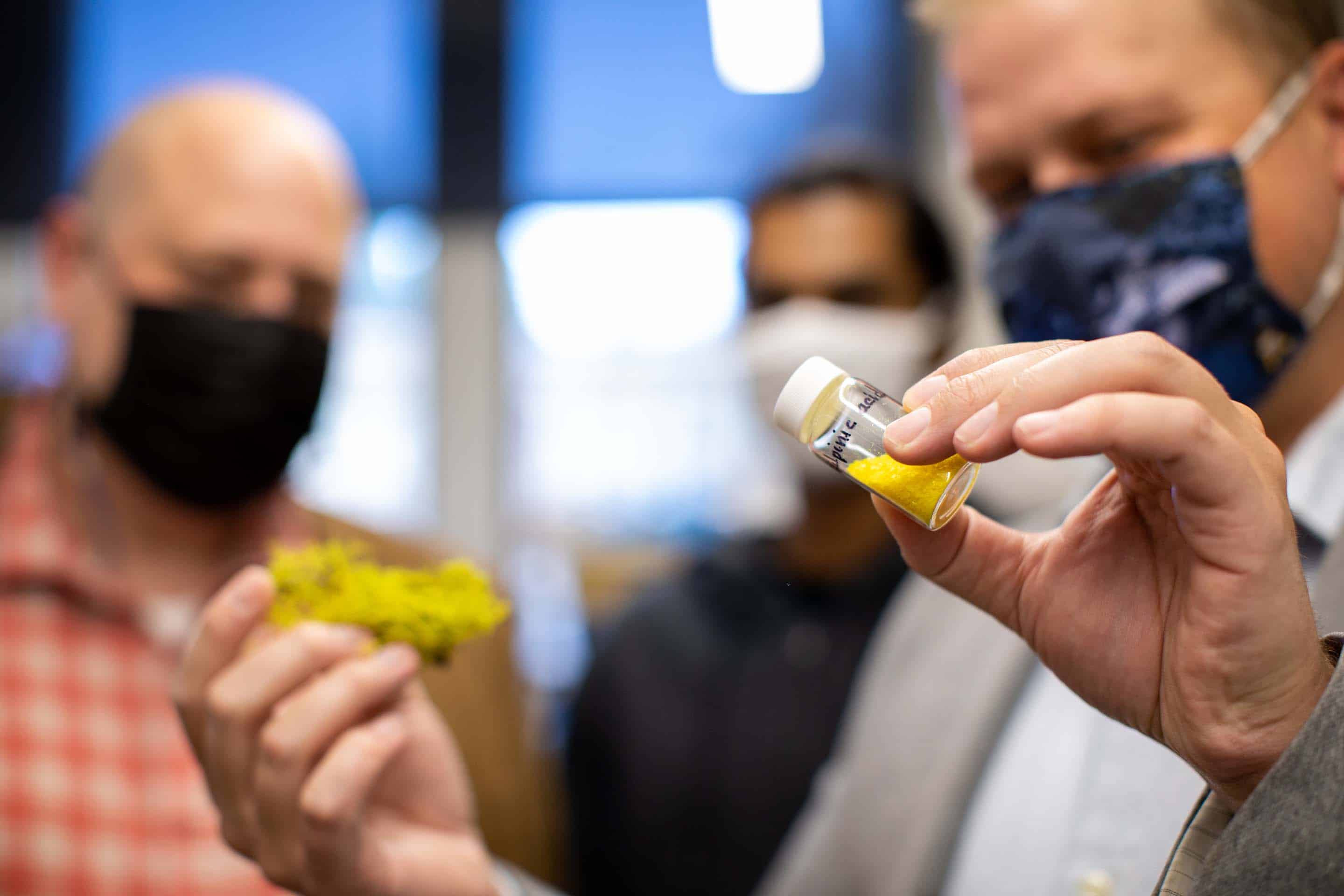 Jeffrey holds a vial of vulpinic acid isolated from lupus litharium, or Wolf lichen. Wolf lichen is found in Nevada, and the sample they isolated the vulpinic acid from was collected on a camping trip at Yuba Pass. The yield for the pigment is relatively high because five percent of the lichen’s mass is composed of the pigment.

Jeffrey’s research will focus on isolating the pigments from the lichen and using synthetic chemistry techniques to produce larger quantities of the pigments, because harvesting them from the lichen doesn’t necessarily produce a high yield of pigment. Then comes the matter of making sure the pigments will hold up to intense energy. That’s where Tucker’s lab comes in.

Tucker’s lab specializes in femtosecond laser spectrometry. A femtosecond is a millionth of a billionth of a second, and ultra-fast lasers can work like cameras with a shutter speed that can catch molecular movement and energy flow at that tiny time scale.

“I’m interested in understanding structural dynamics and the relationships to biological systems using laser spectroscopy,” said Tucker. He studies how energy can flow in an environment, or in this case, within the pigments and their environment.

Once in Tucker’s lab, the pigments will be placed in the path of a laser that is guided by a series of mirrors that will allow the researchers to determine exactly when the laser hits the pigment, which happens at the speed of light. The equipment in Tucker’s lab is precise enough to account for the time difference generated by the mirrors. The laser beam will strike the pigment, but instead of letting the light through, the pigment will dissipate that energy. 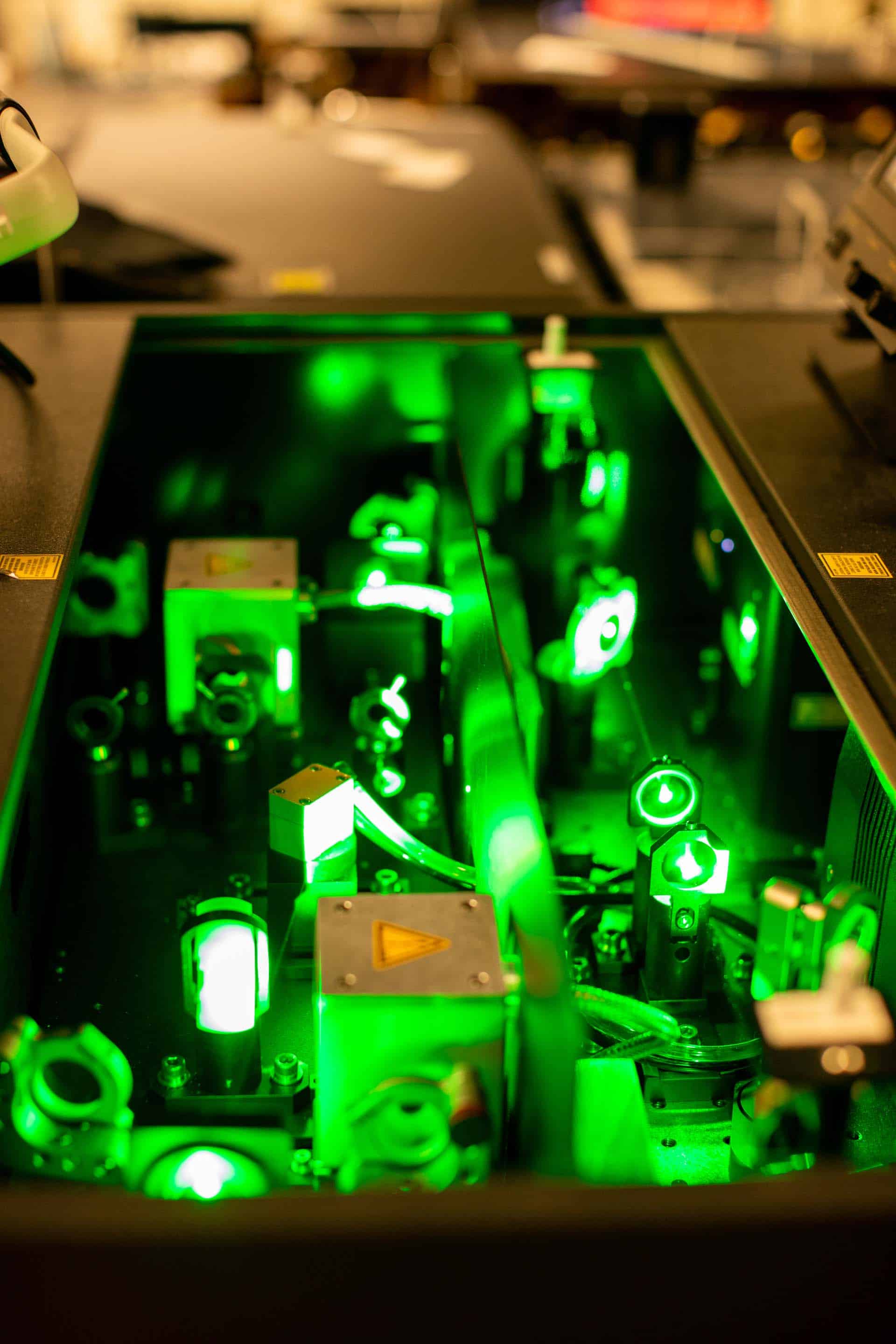 The laser beam in Tucker’s lab is powerful enough to burn your finger.

The evolution of the pigments to work as they do is impressive. The pigments prevent unfavorable chemical reactions from happening inside the cells that result from the absorption of ultraviolet light. Instead, the pigments dissipate the energy quickly and a most safe and effective way.

Utilizing their findings, researchers hope to develop a supplement that can be consumed by astronauts that will give them the same protective effects that the lichens have, like a sunscreen that protects you from the inside.

“And now, once you have this protection sorted out, you can engineer plant life in that way, now you can start to grow plant life on Mars. You can generate some ozone possibilities and ultimately you don’t need all that UV protection,” Tucker said.

Other applications of these pigments might be more commercial, such as a deck paint that withstands sun exposure for longer periods of time.

Researchers also hope to understand the structure of the sheath that contains the pigments. Typically, these carbohydrate sheaths are water-soluble, but the pigments don’t wash away when it rains on the lichen. Sun says this indicates the sheath is a “chemically perfect scaffold” for the pigment.

Early Earth organisms like cyanobacteria are useful analogs for organisms surviving in harsh environments. Different organisms have solved the radiation problem in the same way.

“There may not be life on Mars, but it’s not because of the radiation,” Sun said. “If other conditions are conducive to life, the radiation would be an easy problem to solve.”

As these symbiotic lichens demonstrate, working together can lead to a beautiful thing, and Tucker is no stranger to that idea. He is currently a co-principal investigator working with other faculty on two large Department of Energy projects for $2.5 million and $2.6 million.

“These collaborations are essential for the project’s success and show how unselfish cooperativity amongst the sciences benefits everyone,” Associate Dean of the College of Science Vince Catalano said.

This research is an intersection of biology, chemistry and physics, which is right up Jeffrey’s alley. As a researcher in the Hitchcock Center for Chemical Ecology, Jeffrey knows how important it can be to reach across the discipline divide. The Hitchcock Center for Chemical Ecology is a program at the University funded by Mick Hitchcock, who developed a groundbreaking treatment for HIV. The program is rooted in interdisciplinary research, particularly between biology, ecology and chemistry. Sun also emphasized the importance of working across fields.

“I’m not a chemist,” Sun said. “So, like the lichen this partnership is mutually beneficial.”

“NASA relies heavily on outside scientists to define the science goal of missions and to analyze the data and put the results in the broad scientific context,” said McKay. “Because missions are interdisciplinary (they usually involve several instruments and several science objectives) the interdisciplinary projects are very important to this process.”

The purpose of the NASA ESPSCoR grant is to bring a wider range of fields into aerospace research activities and apply those fields. Jeffrey has partnered with faculty at Nevada State College (NSC) to develop an interdisciplinary STEM internship program that will bring NSC students to the University campus. This summer internship program will allow those students to gain real research experience in chemistry, biology and physics.

“With the undergraduate interns they get exposure to how the sciences work together, which is important for job and workforce development,” Jeffrey said.

The research team is also focused on producing a short documentary.

“The goal of the documentary is to engage the public that way, because they might see the outcome of science, or the outcome of sending something to the Moon, but often they don’t see how it really takes a huge multi-disciplinary group to not only have their expertise in their sciences, but see the pathway that unites all of those together, and figure out how to work with each other to deliver an outcome,” Tucker said.

“We want to train students to think broadly,” Sun said. “We’re led to a narrow path of thinking. That’s the reason, I think, this interdisciplinary idea has merit.”