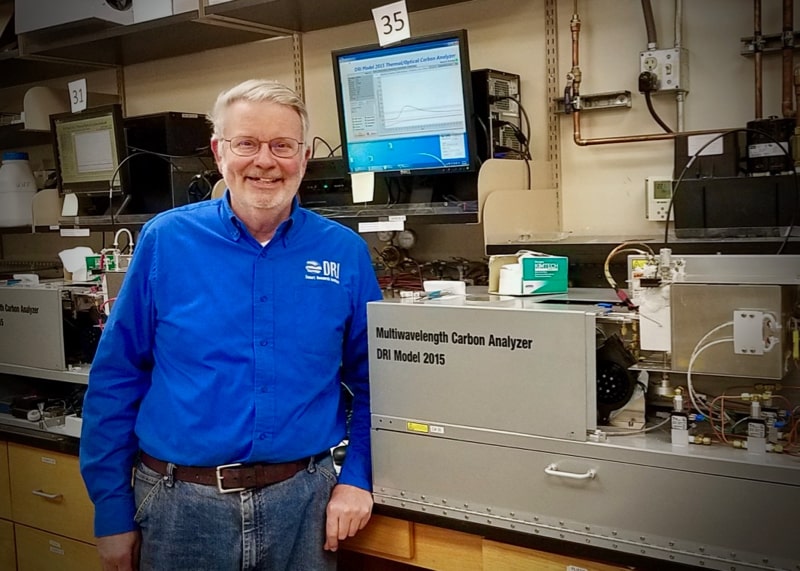 John Watson, Ph.D., is a research professor of air quality science with the Division of Atmospheric Sciences at the Desert Research Institute in Reno. John specializes in air quality measurements, source apportionment (tracing pollutants to their sources), and adverse effects of air pollutants. He recently received the 2018 Haagen-Smit Clean Air Award in honor of his five decades of air quality studies in central California. He grew up in southern California, and holds a bachelor’s degrees in physics from the State University of New York at Brockport, a master’s degree in physics from the University of Toledo, and a Ph.D. in environmental sciences from the Oregon Health and Science University. John has been a member of the DRI community since 1982. In his free time, John enjoys hiking in the mountains; his favorite National Park is Lassen.

DRI: What do you study here at DRI?

JW: Most of my work involves air pollution studies with a focus on small particles — the inhalable kind that get into your body. The two big pollutants we’re interested in right now are ozone and particulate matter. Most of the other major pollutants have been pretty much brought under control.

Right now, some of our biggest projects are for the national speciation networks, where we prepare and send out air quality filters to locations all over the country, including many sites in national parks and wilderness areas (the IMPROVE program and Chemical Speciation Network). When we get the filters back to DRI, we analyze them for different compounds that impact things like visibility and human health.

Another big thing we’re looking at right now is wildfires. As our climate is changing, we’re getting prolonged periods of droughts interspersed with very extreme storms. We’re seeing that these are becoming not only more numerous, but more intense. We’ve developed a method that separates fire contributions from other sources of the particulate matter. We do this by measuring what we call the brown carbon. It turns out there’s a different color to the smoke. You don’t always know it when you see it, but once you sample it and make a measurement of it, we can separate it from things like engine exhaust.

DRI: You mentioned that you are especially interested in ozone and particulate matter. Why are these two pollutants so concerning?

JW: Air quality standards are based on public health. It should be of concern to most people that they’re taking years off their lives if they live in a polluted environment. These pollutants also cause material damage. Ozone destroys rubber, so windshield wipers, tires, and things like that deteriorate more rapidly.

Particulate matter deposits onto surfaces. Back when we had belching smokestacks, it used to be that you couldn’t hang your clothes out on a clothesline to dry, because they would be covered in black soot. In the mid-80s, we had a tremendous haze here in the Truckee Meadows because of pollution related to residential wood smoke, and even some of the road sanding. They were using a very fine sanding material to improve traction on the roads, which wasn’t effective; it was from volcanic material and it crushed up into very fine particles so it that would get suspended and be a nuisance as well. A more durable granite sand is currently in use.

DRI: What kind of tools and technology do you use to take air quality measurements?

JW: We’re starting to use small air quality monitors, which are battery powered devices that you can put in different places. Some have a wi-fi interface so you can look at the data in real time. Since they’re so small, you can power them with a five-volt charger. There are thousands of them in China, and some in California.

These types of micro-sensing devices are probably one of the areas where we’ll see a lot of growth in the future. Most of our instrumentation is bigger and bulkier, and a lot is based on filters that we take and we run thru different analyses in our laboratory. We can get up to 200 or 300 different chemical components from these samples.

The chemistry is important for several reasons – it’s kind of a fingerprint, so if you have a pattern of chemistry, you can use that to identify where the compounds came from. The other important aspect is the adverse environmental effects on health, ecosystems and other things. 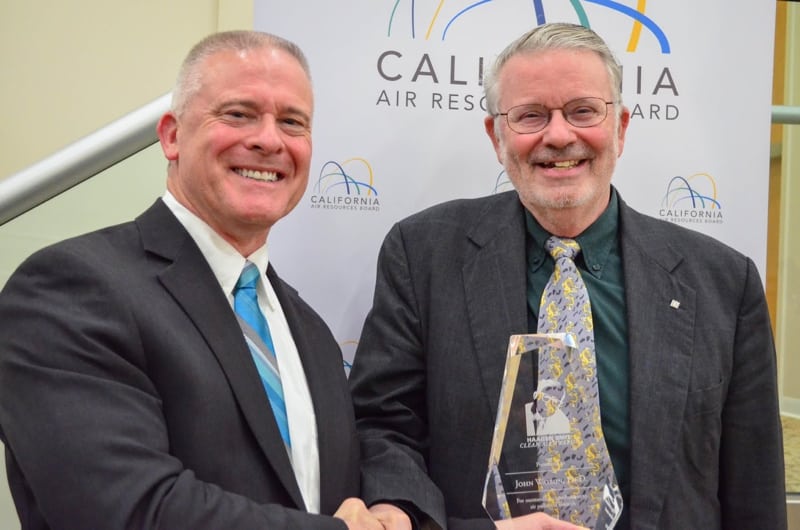 DRI: You were recently awarded the California Air Resource Board’s 2018 Haagen-Smit Clean Air Award for your work in California. Can you tell us about that?

JW: Arie Haagen-Smit was one of the early scientists that worked in air quality in Southern California. He is the one that discovered the mechanism of photochemical smog back in the late 1940s or early 1950s, which linked smog in Southern California to engine exhaust. He came up with some ingenious methods for measuring ozone; he didn’t have all the equipment we have now. He was also the first chair of the California Air Resources Board. The award was established to honor him and those who follow in his footsteps. I received the award for my work in air quality science;  there are also categories for international contributions, policy, and control technology.

I’ve been working in air pollution in California for almost 50 years. California is one of the best air quality laboratories in the world, because it has such diverse terrain, populations, meteorology, and types of emissions. We’ve made some important discoveries over the last few decades. I would say probably the one we learned the most from was the Fresno Supersite, mainly because we kept at it for almost 10 years, from 1999 to 2007.

We had a large array of instrumentation out there, and this allowed us to discover some new phenomena. Probably the most important one from an air pollution control standpoint was seeing that the ammonium nitrate particles, which form from atmospheric gases, are created above the surface at night, then mix down to the surface after sunrise. The implication of this is that oxides of nitrogen emissions need to be reduced  throughout the entire Central Valley, not just in the cities where these emissions from engine exhaust are most intense. The Supersite provided opportunities to experiment with new technologies, try out new things, and interpret the data in ways that revealed new air pollution science.

To learn more about John Watson and his research, please visit: https://www.dri.edu/directory/4861-john-watson