From COVID-19 to Drought:

On a recent Friday, Maureen McCarthy, Ph.D., of the Desert Research Institute (DRI) and Vicki Hebb of the University of Nevada, Reno (UNR) did the same thing they’ve done each Friday since the COVID-19 pandemic began, nearly 70 Fridays ago: they kicked off a weekly Zoom call with the Native Waters on Arid Lands (NWAL) project’s COVID-19 Working Group, an ever-expanding network of Tribal Extension Agents, agricultural producers, educators, and federal agency leaders from U.S. Department of Agriculture (USDA), Federal Emergency Management Agency (FEMA) and other agencies across the U.S. that are working together to solve problems and share information across Indian Country.

On the call were many regulars and a few new faces, whom McCarthy and Hebb greeted warmly, chatting about recent hot weather in South Dakota, Montana, and elsewhere around the U.S. before getting into the day’s agenda. First, weekly updates from program leaders of the USDA Office of Tribal Relations, USDA-National Institute of Food and Agriculture (NIFA), FEMA, and the Intertribal Agriculture Council (IAC) on new programs, grant opportunities, and upcoming events. Then, a presentation on the week’s featured topic – an update on wildfire projections for the coming summer from Nick Nauslar, Bureau of Land Management fire meteorologist with the National Interagency Fire Center in Boise.

“Basically, we’re just problem solving and information sharing,” said McCarthy, program director for NWAL. “We have people each week who give regular updates from their agencies, and then we have a featured topic that’s related to the ongoing challenges or interests of the group – which could be anything from food security to COVID vaccine education to drought briefings. We’ve created a platform that didn’t exist before in Indian Country for people to share information among themselves.” 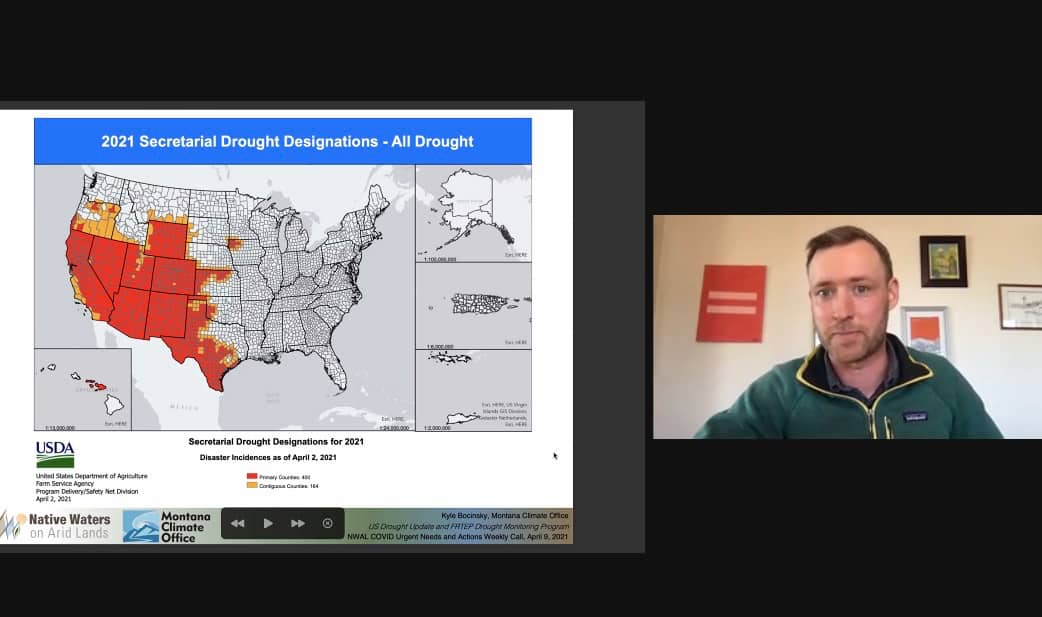 NWAL Team member Kyle Bocinsky presents information on drought to the COVID-19 Working Group during a Zoom call in April 2021.

The COVID-19 pandemic produced unexpected challenges for people in all parts of the world, but hit particularly hard in many reservation communities across the U.S. due to factors such as lack of access to clean water, overcrowded homes, intergenerational families, high rates of disease, lack of access to health care, and economic challenges. In mid-March of 2020, several members of the NWAL team reported to McCarthy that tribes in their regions were facing a number of dire pandemic-related problems; in response, McCarthy, Hebb, Trent Teegerstrom (tribal extension director for the University of Arizona), and Staci Emm (tribal extension coordinator for UNR) began organizing weekly Zoom calls with USDA program leaders and NWAL tribal partners from across Indian Country to facilitate direct communication about urgent on-the-ground issues.

The first several calls provided a platform for tribal members and tribal extension agents from various reservations to communicate their most urgent challenges and needs. They also featured briefings from medical professionals about what COVID-19 was, how it was spreading, and what actions could be taken by tribal communities and educators. From there, connections were made, and the group slowly expanded in size and scope.

“When we started, we thought we would do these calls for a few weeks or a few months,” Hebb said. “It grew from our immediate group – the Native Waters on Arid Lands team – to now having representatives from tribes all over the country, including Alaska, as well as key tribal agricultural organizations and federal agency partners. Now we’re more than a year into it, with close to 200 people on the weekly invite list.” 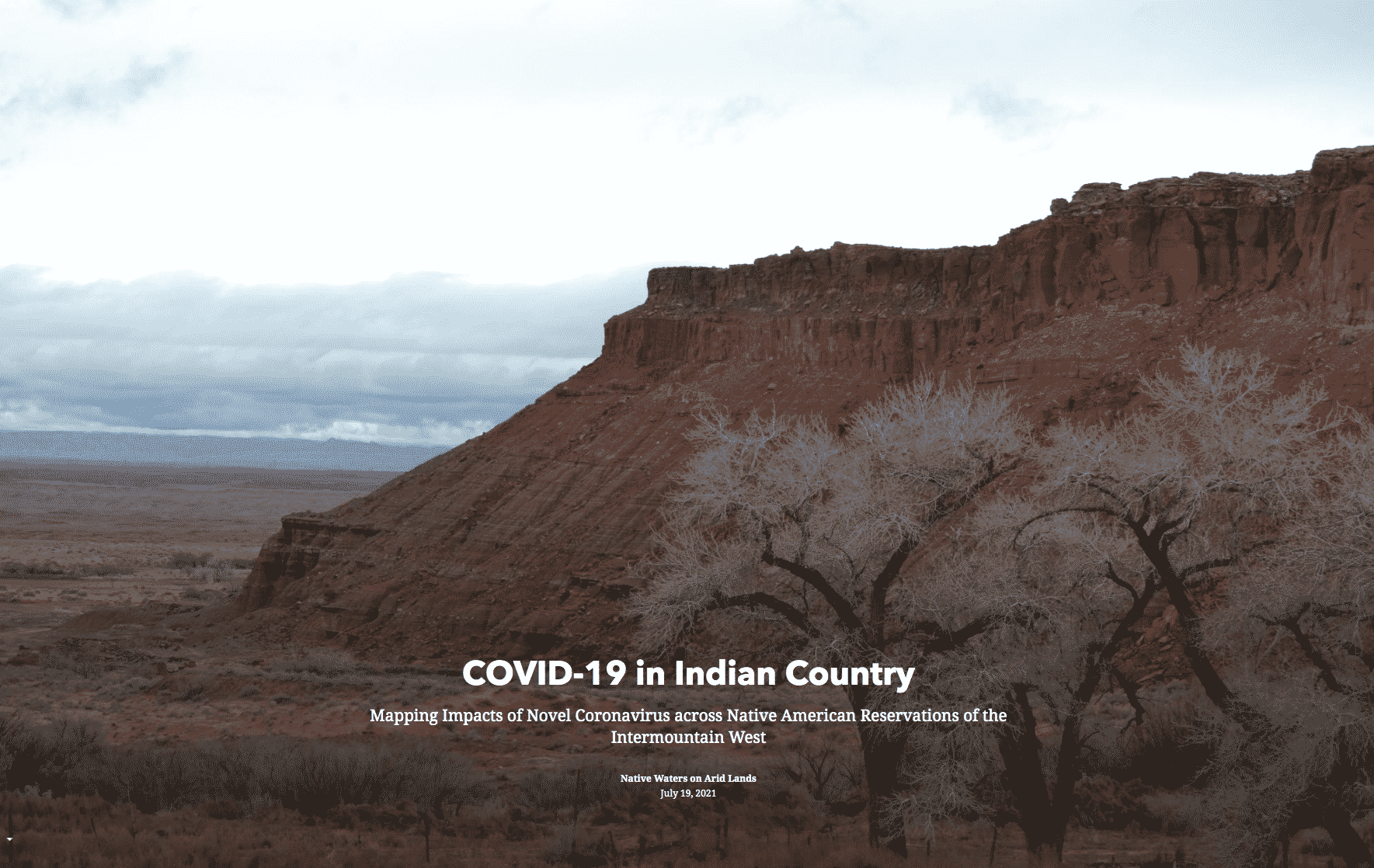 The NWAL team’s ArcGIS StoryMap, “COVID-19 in Indian Country,” tracked impacts of the COVID-19 pandemic shared on the weekly Zoom calls, as well as the group’s COVID-19 response projects. Click the photo above to view the StoryMap.

One of the group’s earliest accomplishments was to develop a list of urgent issues and actionable items for federal agency partners. Requests included reimbursements for farmers who had to keep animals alive during livestock trading shutdowns, loan relief to cover grazing leases, funding for local food production programs, and improved access to medical supplies and COVID-19 test kits.

Certain problems voiced on the calls were solved just by putting the right people in touch with each other. For example, on a call in May 2020, representatives from the Hopi Tribe and Navajo Nation spoke to the desperate need for firewood to heat their homes. A Forest Service representative offered up a supply of wood from a nearby forest thinning project and others from the Working Group joined forces to locate a trucking company and make it happen, resulting in the delivery of more than 100 cords of wood to Hopi and Navajo communities.

As other challenges surfaced, the Working Group mobilized to assist. When hay was in short supply on the Hopi Reservation last June, the group coordinated a donation of 350 bales to feed hungry livestock. When water quality became a concern in tribal buildings that were left vacant during COVID-19 closures, the group partnered with a water testing and purification company, Nephros, to analyze water samples. When a representative from an Alaskan Native community spoke to the need for essential non-food items in villages hit hard by COVID-19 last December, the group organized a successful donation drive for items such as cleaning supplies, hand sanitizer, and winter clothing for children. And in February 2021, when call participants voiced concerns about rumors and misinformation around the COVID-19 vaccines, the Working Group created a new website called “Facts Not Fear” to supply accurate information and educational resources to individuals in Indian Country.

“I think this group has just done an enormous amount – we’ve changed a lot of people’s lives, in little ways that were really, really important, especially during COVID,” said Erin Riley, national program leader for USDA-NIFA. “A lot of people really needed assistance, and we were able to provide that. I also think that one thing that we did that was special was we were really able to work together between the government, project directors, non-government organizations, and communities in a way that is a model for how things are supposed to work under our particular political structure.” 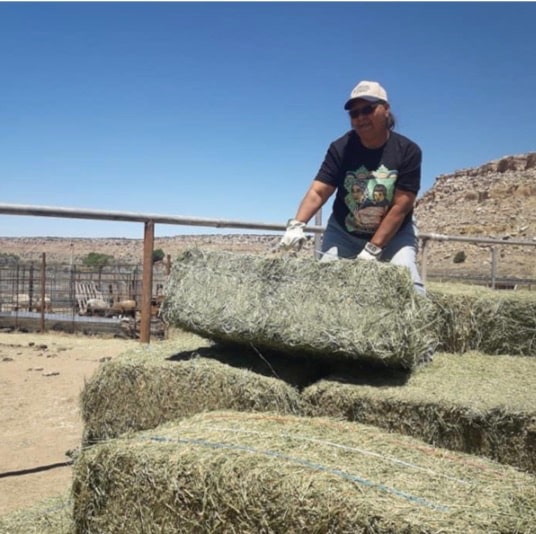 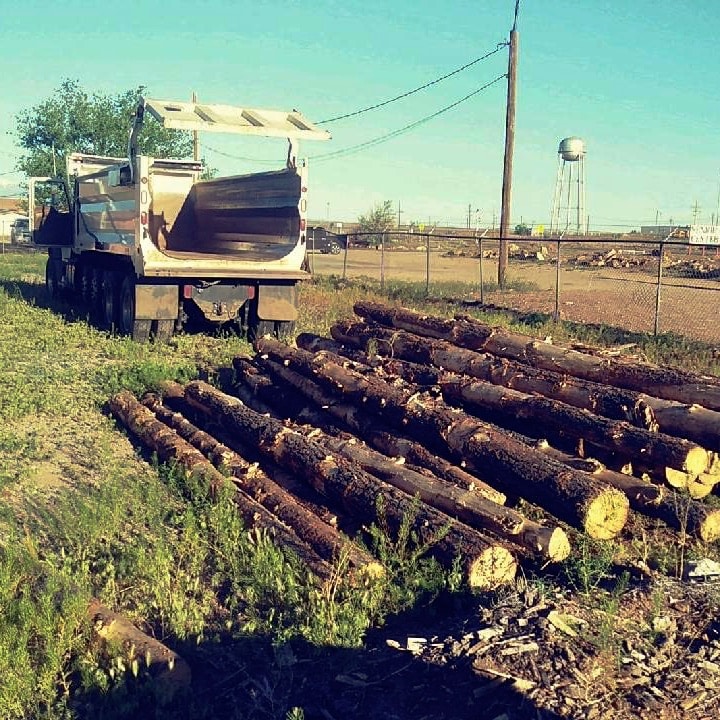 In May 2020, the COVID-19 Working Group arranged for the delivery of more than 100 cords of wood to the Hopi Tribe and Navajo Nation. Click the photo above to read the full story. 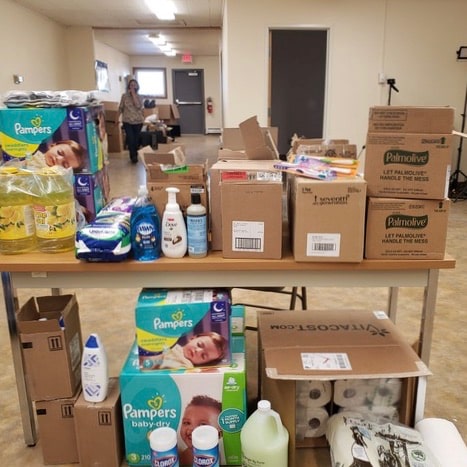 When a representative from an Alaskan Native community spoke to the need for essential non-food items, the COVID-19 Working Group organized a successful donation drive. Click photo above to read the full story. 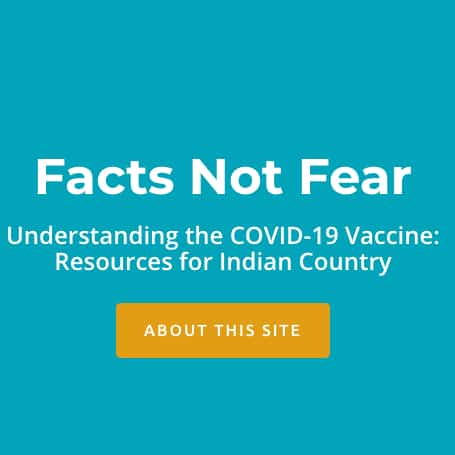 In response to concerns about rumors and misinformation around COVID-19 vaccines, the Working Group created a website called “Facts Not Fear.” Click the image above to visit the site.

Looking forward: From the challenges of COVID-19 to ongoing impacts of extreme drought

Over time, it has become clear that the weekly calls are meeting a need. Although the problems may change from week to week, the benefits of connecting with like-minded partners and tackling big problems together won’t be going away any time soon.

As certain pandemic-related challenges have begun to fade, new challenges are emerging. The southwestern U.S. is now experiencing extreme to exceptional levels of drought, and the Working Group continues to meet weekly via Zoom for a presentation on a timely issue and collaboration on what the group can do to assist. Recent call topics have included drought projections, COVID-19 vaccine information, mental health and farm stress, drought impacts on pollinators and invasive species, and wildfire forecasts.

“I think the most important thing that’s come out of our weekly calls is that there’s a trusted place to exchange information and that we are able to get reliable information out to people on the ground really fast,” Hebb said. “This is really helping tribal producers make decisions that improve their livelihoods.”

The Desert Research Institute (DRI)  is a recognized world leader in basic and applied environmental research. Committed to scientific excellence and integrity, DRI faculty, students who work alongside them, and staff have developed scientific knowledge and innovative technologies in research projects around the globe. Since 1959, DRI’s research has advanced scientific knowledge on topics ranging from humans’ impact on the environment to the environment’s impact on humans. DRI’s impactful science and inspiring solutions support Nevada’s diverse economy, provide science-based educational opportunities, and inform policymakers, business leaders, and community members. With campuses in Las Vegas and Reno, DRI serves as the non-profit research arm of the Nevada System of Higher Education.

About Native Waters on Arid Lands

The Native Waters on Arid Lands (NWAL; https://nativewaters-aridlands.com) project seeks to enhance the climate resiliency of agriculture on American Indian lands of the Great Basin and Southwest by building the capacity within tribal communities to develop and implement reservation-wide plans, policies, and practices to support sustainable agriculture and water management. Partners in the project include the Desert Research Institute; the University of Nevada, Reno; the University of Arizona; First Americans Land-Grant Consortium; Utah State University; Ohio University; and the Federally Recognized Tribal Extension Program in Nevada and Arizona. This project is funded by the U.S. Department of Agriculture’s National Institute of Food and Agriculture