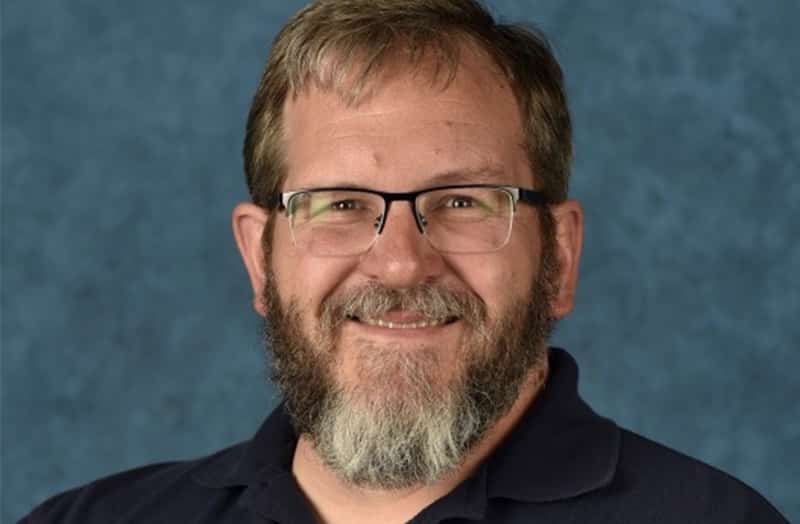 Reno, Nev. (March 5, 2020) – Today, the Nevada System of Higher Education (NSHE) Board of Regents awarded the 2020 Rising Researcher Award to Mark Hausner, Ph.D., of the Desert Research Institute (DRI) in Reno. This honor is given annually to researchers from DRI, the University of Nevada, Reno (UNR) and the University of Nevada, Las Vegas (UNLV) based on early-career accomplishments and potential for future advancement and recognition in research.

Hausner is an assistant research professor with DRI’s Division of Hydrologic Sciences, and specializes in ecohydrology, the study of interactions between water and ecological systems. His research has increased our understanding of how heat and water move through the environment, how climate change and disturbance affect those processes, and how to assess the resultant impacts to various aspects of the hydrologic setting and the ecosystem.

“I am honored to be recognized by the Board of Regents for my work in the field of hydrology,” Hausner said. “I look forward to continuing to explore new questions about how water and ecosystems affect one another throughout my career.” 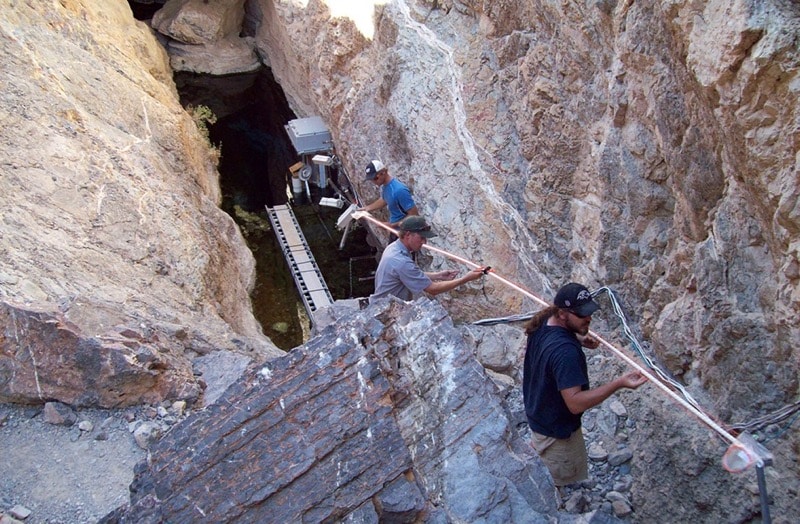 Mark Hausner (right) installs temperature sensors in Devils Hole with researchers from the US National Park Service and US Fish and Wildlife Service. 2010.

Much of Hausner’s recent work focuses on the use of satellite imagery to fill in information gaps about the impacts of human activity on riparian landscapes in the Western US. He has worked extensively on Devils Hole in southern Nevada, a unique geologic formation that provides the only naturally occurring habitat for the endangered Devils Hole Pupfish. Hausner’s other notable projects include studies of groundwater-surface water interactions, as well as applied science support for the US military, US Department of Energy, and resource managers such as the South Tahoe Public Utility District and Tahoe Regional Planning Agency.

Since beginning his career at DRI in 2014, Hausner has given over 60 presentations at national scientific conferences and workshops and published 18 peer reviewed publications to high quality journals such as Groundwater and Water Resources Research. He has successfully developed and funded more than 15 grants and contracts from diverse sources such as the Department of Energy, Oregon Department of Fish and Wildlife, NASA, and the Death Valley Conservancy, a total of more than $938,000 in funded projects.

Hausner holds a B.S. in civil and environmental engineering from Cornell University, and M.S. and Ph.D. degrees in hydrologic sciences and hydrogeology form the University of Nevada, Reno. He joined DRI in 2014 as a postdoctoral fellow, and transitioned to an assistant research professor in 2016.

For more information about Hausner and his work, please visit his directory page. 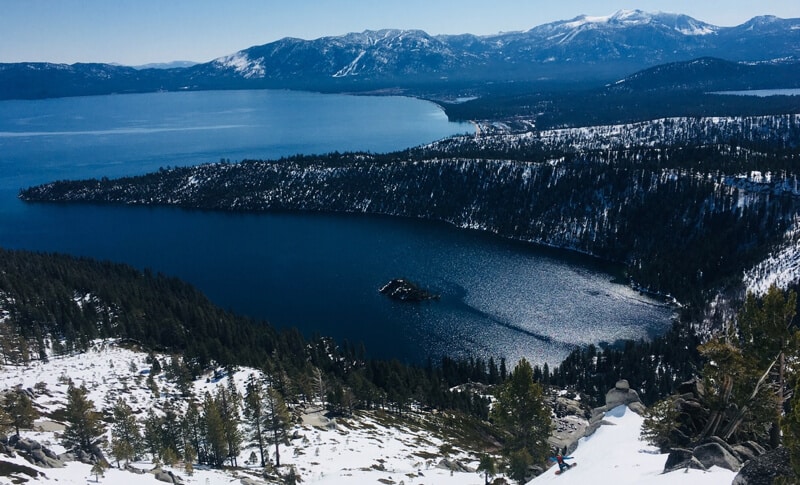 Reno, Nev. (Jan. 22, 2018): Many Western communities rely on snow from mountain forests as a source of drinking water – but for scientists and water managers, accurately measuring mountain snowpack has long been problematic. Satellite imagery is useful for calculating snow cover across open meadows, but less effective in forested areas, where the tree canopy often obscures the view of conditions below.

Now, a new technique for measuring snow cover using a laser-based technology called lidar offers a solution, essentially allowing researchers to use lasers to “see through the trees” and accurately measure the snow that lies beneath the forest canopy.

In a new study published in Remote Sensing of the Environment, an interdisciplinary team of researchers from Desert Research Institute (DRI), the University of Nevada, Reno (UNR), the California Institute of Technology’s Jet Propulsion Laboratory, and California State University  described the first successful use of lidar to measure snow cover under forested canopy in the Sierra Nevada.

“Lidar data is gathered by laser pulses shot from a plane, some of which are able to pass light through the tree canopy right down to the snow surface and create a highly accurate three-dimensional map of the terrain underneath,” explained lead author Tihomir Kostadinov, Ph.D., of California State University San Marcos, who completed the research while working as a postdoctoral researcher at DRI. “Passive optical satellite imaging techniques, which are essentially photographs taken from space, don’t allow you to see through the trees like this.  We are only starting to take full advantage of all the information in lidar.” 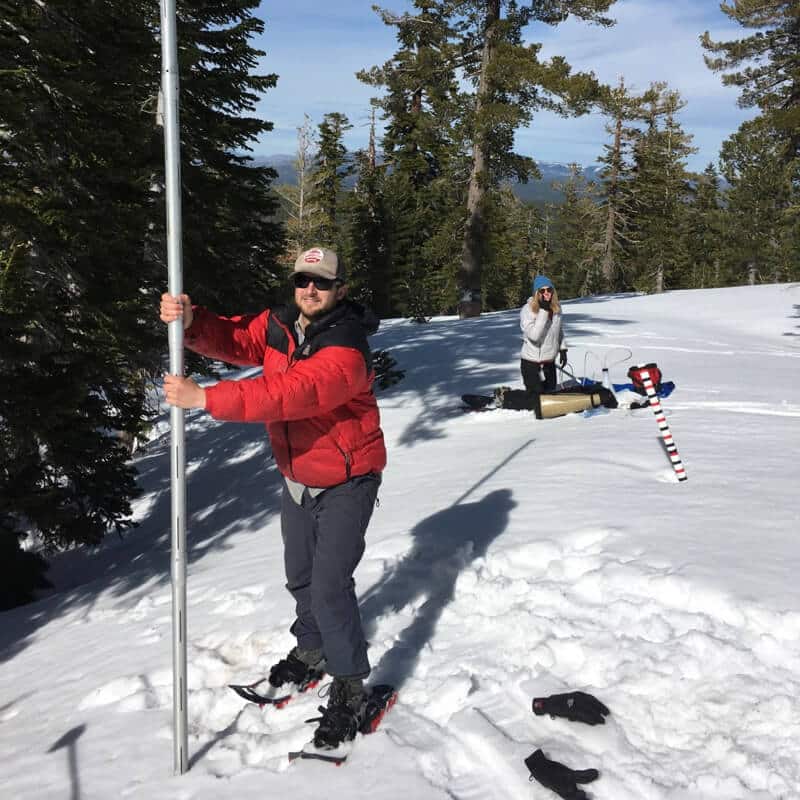 Rowan Gaffney (UNR) surveying the amount of snow at Sagehen Creek Field Station during the NASA airborne campaigns in March 2016. Credit: A. Harpold.

In this study, researchers worked with NASA’s Airborne Snow Observatory to collect lidar data at the University of California, Berkeley’s Sagehen Creek Field Station in the Sierra Nevada by aircraft on three dates during spring of 2016 when snow was present. Additional lidar data and ground measurements facilities by the long-term operation of Sagehen Creek field station were critical to the success of the study.

Analysis of the datasets revealed that the lidar was in fact capable of detecting snow presence or absence both under canopy and in open areas, so long as areas with low branches were removed from the analysis. On-the-ground measurements used distributed temperature sensing with fiber optic cables laid out on the forest floor to verify these findings.

Tree canopies interact with the snowpack in complex ways, causing different accumulation and disappearance rates under canopies as compared to open areas. With the ability to use lidar data to measure snow levels beneath trees, snow cover estimates used by scientists and resource managers can be made more accurate. The importance of this advance could be far reaching, said team member Rina Schumer, Ph.D., Assistant Vice President of Academic and Faculty Affairs at DRI.

“In the Sierra Nevada, April 1st snow cover is what is used to estimate water supply for the year,” Schumer said. “Being able to more accurately assess snow cover is important for California and Nevada, but also all mountainous areas where snowpack is essential to year-round water supply.”

Snow cover estimates are also used by hydrologists for streamflow forecasts and reservoir management. Snow cover data is important to ecologists and biologists for understanding animal migration, wildlife habitat, and forest health, and it is useful to the tourism and recreation industry for informing activities related to winter snow sports. 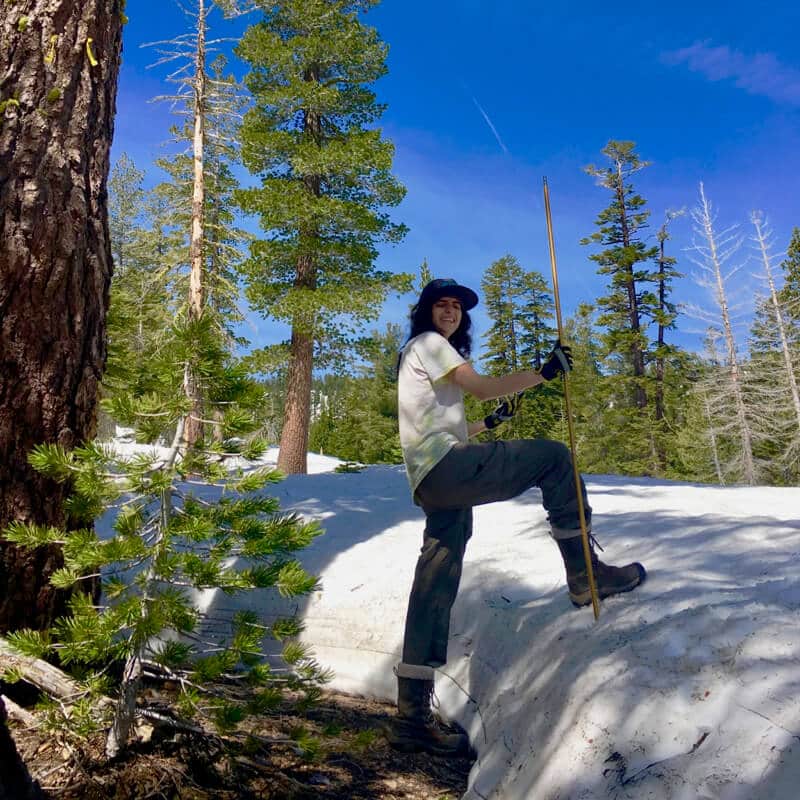 Rose Petersky (UNR) surveying the amount of snow under the forest canopy at Sagehen Creek Field Station during the NASA airborne campaigns in April 2016. The photo clearly shows the reduced snow cover under the canopy that is difficult to measure with satellites. Credit: A. Harpold.

Although lidar data is currently collected via airplane and not easily accessible by all who might like to use it, the study team believes that information gleaned from this study could be used to correct data derived from satellite imagery, which is already widely available from NASA’s MODIS sensor and NASA/USGS’s Landsat satellites.

“This is proof of concept for the method that we think could really expand the extent that we measure snow at high resolution in forests,” said team member Adrian Harpold, Ph.D., Assistant Professor with the Department of Natural Resources at UNR. “I’m now working with a student to extend this approach across multiple sites to improve our understanding of the relationship between snow cover in the open versus under the tree canopy. Then, we hope to use that information to correct and improve satellite remote sensing in forested areas.”

This study was part of a larger NASA EPSCoR project titled Building Capacity in Interdisciplinary Snow Sciences for a Changing World, which aimed to develop new research, technology, and education capacity in Nevada for the interdisciplinary study of snowpack. Objectives included an educational goal of training the next generation of scientists.

“This project brought together people who look at snow from different scientific perspectives, and generated a conversation amongst us,” said Alison Murray, Ph.D., Research Professor at DRI and principal investigator of the NASA EPSCoR project. “In addition to bringing together expertise from three institutions in Nevada (DRI, UNR, and UNLV) in hydrology, remote sensing, geosciences, atmospheric chemistry and snow associated life, we developed strategic alliances with NASA’s airborne snow survey. Where the Nevada researchers might have been studying snow on our own, this interdisciplinary project allowed us to look at snow in an integrated fashion and make some important advances.”