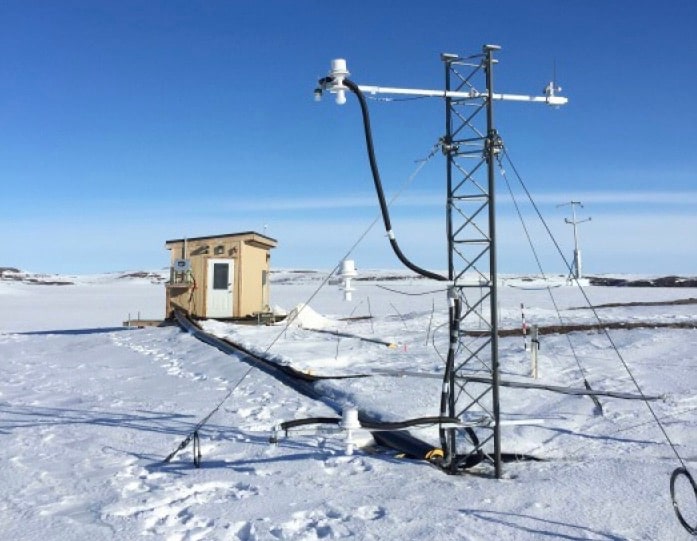 Reno, Nev. (July 14, 2017): Vast amounts of toxic mercury are accumulating in the Arctic tundra, threatening the health and well-being of people, wildlife and waterways, according to a new study published this month by an international team of scientists investigating the source of the pollution.

Led by Prof. Daniel Obrist, chairman of UMass Lowell’s Department of Environmental, Earth and Atmospheric Sciences, an atmospheric chemist and former lead of the Desert Research Institute’s (DRI) Mercury Analytical Lab, the study found that airborne mercury is gathering in the Arctic tundra, where it gets deposited in the soil and ultimately runs off into waters. Scientists have long reported high levels of mercury pollution in the Arctic.

The new research identifies gaseous mercury as its major source and sheds light on how the element gets there.

“Now we understand how such a remote site is so exposed to mercury,” Obrist said. Although the study did not examine the potential impact of global warming, if climate change continues unchecked, it could destabilize these mercury deposits in tundra soils and allow large amounts of the element to find its way into Arctic waters, he added.

Obrist and his colleagues – including students and researchers from DRI – recently completed two years of field research in the tundra, tracking the origin and path of mercury pollution. Working from an observation site in Alaska north of Brooks Range, he and an international group of scientists identified that gaseous mercury in the atmosphere is the source of 70 percent of the pollutant that finds its way into the tundra soil. In contrast, airborne mercury that is deposited on the ground through rain or snow – a more frequent focus of other studies – accounts for just 2 percent of the mercury deposits in the region, Obrist’s team found.

The new research is the most comprehensive investigation on how mercury is deposited in the Arctic. The full results of the study, which was supported by the National Science Foundation, appear in the July 13 edition of the prestigious academic journal Nature.

Mercury is a harmful pollutant, threatening fish, birds and mammals across the globe. The dominant source of mercury pollution in the atmosphere is hundreds of tons of the element that are emitted each year through the burning of coal, mining and other industrial processes across the globe.

This gaseous mercury is lofted to the Arctic, where it is absorbed by plants in a process similar to how they take up carbon dioxide. Then, the mercury is deposited in the soil when the plants shed leaves or die. As a result, the tundra is a significant repository for atmospheric mercury being emitted by industrialized regions of the world.

“This mercury from the tundra soil explains half to two-thirds of the total mercury input into the Arctic Ocean,” Obrist said, adding that scientists had previously estimated mercury runoff from tundra soil supplies 50 to 85 tons of the heavy metal to Arctic waters each year.

Exposure to high levels of mercury over long periods can lead to neurological and cardiovascular problems. The results are being felt by Arctic people and wildlife.

Obrist will present the team’s research at the International Conference on Mercury as a Global Pollutant, which will be held Sunday, July 16 through Friday, July 21 in Providence, R.I. The event is the largest scientific conference on mercury pollution, involving nearly 1,000 participants from research institutions, governments and other agencies.

Obrist hopes to continue to investigate whether gaseous mercury is also a dominant source of pollution in other remote lands. Scientists, regulators and policymakers need a better understanding of how the uptake of gaseous mercury in plants and soils is affecting the environment, including the world’s forests, he said.

The research findings underscore the importance of the Minamata Convention on Mercury, the first global treaty that aims to protect human health and the environment from the element’s adverse effects, Obrist said. Signed by the United States and more than 120 other countries, the pact will take effect next month, with the goal of reducing mercury emissions caused by industrialization and other human activities.

Other contributors to the study include scientists from the University of Colorado; Gas Technology Institute in Des Plaines, Ill.; Desert Research Institute in Reno, Nev.; Sorbonne University in Paris, France; and University of Toulouse in Toulouse, France. Additional support for the research was provided by the U.S. Department of Energy, a Marie Sklodowska-Curie grant and funding from the European Research Council and the French National Centre for Scientific Research.

UMass Lowell is a national research university located on a high-energy campus in the heart of a global community. The university offers its more than 17,750 students bachelor’s, master’s and doctoral degrees in business, education, engineering, fine arts, health, humanities, sciences and social sciences. UMass Lowell delivers high-quality educational programs, vigorous hands-on learning and personal attention from leading faculty and staff, all of which prepare graduates to be ready for work, for life and for all the world offers. http://www.uml.edu

The Desert Research Institute (DRI) is a recognized world leader in investigating the effects of natural and human-induced environmental change and advancing technologies aimed at assessing a changing planet. For more than 50 years DRI research faculty, students, and staff have applied scientific understanding to support the effective management of natural resources while meeting Nevada’s needs for economic diversification and science-based educational opportunities. With campuses in Reno and Las Vegas, DRI serves as the non-profit environmental research arm of the Nevada System of Higher Education. For more information, please visit www.dri.edu