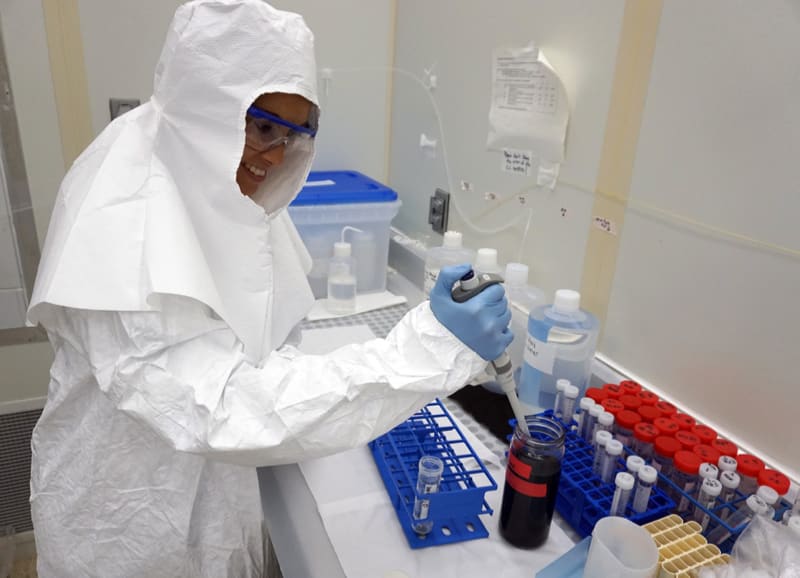 Reno, NV (Aug. 10, 2017): Smoky skies and burnt landscapes are the easily recognizable, local and immediate impacts of large wildfires. Long after these fires are gone, their emissions are cataloged and stored forever in ice covering the Earth’s polar regions.

The new study identifies a link between the concentration of wildfire black carbon (BC) emissions —a type of biomass-burning aerosol particle commonly known as soot—found in Antarctic ice cores and climate conditions in the Southern Hemisphere during the mid-Holocene, about 6,000 years ago.

Led by Monica Arienzo, PhD, an assistant research professor of hydrology at DRI, a team of international researchers used DRI’s unique ultra-trace ice core analytical laboratory to measure BC concentrations in two Antarctic ice cores, ice that contains traces of compounds present in the atmosphere at the time the snow fell. This method allowed researchers to make comparisons to other records, such as lake and marine sediment cores, and develop a high-resolution record of biomass-burning emissions in the Southern Hemisphere from 14 to 2.5 thousand years before present day.

“This is the longest ice core black carbon record published to date,” Arienzo said, “and it tells us a fascinating story about wildfire.”

The new ice core record illustrates that, during the mid-Holocene, decreases in precipitation and soil moisture coupled with increases in temperature and fire season length in regions of South America were mirrored by increased concentrations of BC in Antarctic ice.

“Our analysis gives us a sense of what climate-fire relationships were like before significant human-caused changes to the climate,” explained Joe McConnell, PhD, a study co-author and research professor of hydrology at DRI. “Knowing what climate-fire relationships were like in the past will help scientists make more accurate climate models because they can account for BC contributions from wildfires in addition to those from human sources.”

BC acts as an agent of climate forcing, a process which occurs in the atmosphere when the amount of incoming energy is greater than the amount of outgoing energy, “forcing” the planet to adjust by releasing energy as heat and warming up. This is a natural process, catalyzed by events such as large volcanic eruptions and changes in the sun’s energy output; however, human-caused climate forcing in the form of BC emissions, has increased dramatically since the Industrial Revolution and now is a significant climate forcing agent, second only to carbon dioxide (CO2).

BC also impacts ice sheet albedo, the reflectivity of a surface. Ice and snow have a high albedo because they are very white and reflect much of the sun’s energy. This reflectivity keeps the snow and ice cold and delays melting. Conversely, snow and ice with BC deposits have a lower albedo, causing increased absorption of energy into the snow and ice and more rapid melting.

“Recent precipitation models indicate vast regional changes in rainfall in the Southern Hemisphere in the future,” Arienzo added. “Our findings indicate that such rainfall changes may be accompanied by changes in Southern Hemisphere wildfires. Given that BC emissions from human sources are predicted to increase, our findings are an important factor for climate predictions involving BC impacts.”