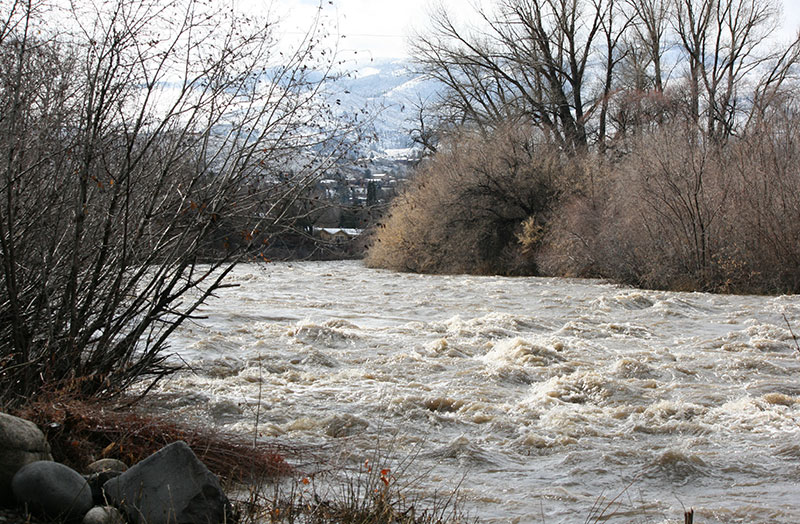 Above: The Truckee River in Reno, Nev. during high flow conditions after a storm in late January, 2016.

Flood frequency analysis is a technique used to estimate flood risk, providing statistics such as the “100-year flood” or “500-year flood” that are critical to infrastructure design, dam safety analysis, and flood mapping in flood-prone areas. But the method used to calculate these flood frequencies is due for an update, according to a new study by scientists from DRI, University of Wisconsin-Madison, and Colorado State University.

Floods, even in a single watershed, are known to be caused by a variety of sources, including  rainfall, snowmelt, or “rain-on-snow” events in which rain falls on existing snowpack. However, flood frequencies have traditionally been estimated under the assumption these flood “drivers,” or root causes, are unimportant.

In a new open-access paper in Geophysical Research Letters, a team led by Guo Yu, Ph.D., of DRI examined the most common drivers (rainfall, snowmelt, and rain-on-snow events) of historic floods for 308 watersheds in the Western U.S., and investigated the impact of different flood types on the resulting flood frequencies.

Their findings showed that most (64 percent) watersheds frequently experienced two or three flood types throughout the study period, and that rainfall-driven floods, including rain-on-snow, tended to be substantially larger than snowmelt floods across watershed sizes.

Further analysis showed that by neglecting the unique roles of each flood type, conventional methods for generating flood frequency estimates tended to result in under-estimation of flood frequency at more than half of sites, especially at the 100-year flood and beyond.

“In practice, the role of different mechanisms has often been ignored in deriving the flood frequencies,” said Yu, a Maki postdoctoral research associate at DRI. “This is partly due to the lack of physics-based understanding of historic floods. In this study, we showed that neglecting such information can result in uncertainties in estimated flood frequencies which are critical for infrastructure.”

The study findings have important implications for estimating flood frequencies into the future, as climate change pushes conditions in snowmelt-dominated watersheds toward increased rainfall.

“How the 100-year flood will evolve in the future due to climate change is one of the most important unanswered questions in water resources management,” said Wright, an associate professor in Civil and Environmental Engineering at University of Wisconsin-Madison. “To answer it, we need to focus on the fundamental science of how the water cycle, including extreme rainstorms and snow dynamics, are and will continue to change in a warming climate.”

The study team hopes that this research is useful to engineers, who rely on accurate estimates of flood frequencies when building bridges and other infrastructure. Although many engineers realize that there is a problem with the conventional way of estimating flood frequencies, this study provides new insights into the level of inaccuracy that results.

Colorado State is one of the nation’s top public research universities with about 33,000 students and $447 million in annual research funding. The Walter Scott, Jr. College of Engineering at CSU prepares students to solve global challenges to shape a better world through research, education, innovation, and outreach. In addition to a top-ranked graduate program in atmospheric science, the college conducts cutting-edge, interdisciplinary research that provides students hands-on learning in biological, biomedical, chemical, civil, computer, electrical, environmental, mechanical, and systems engineering. The college attracts about $80 million in annual research dollars, placing it in the top tier of public institutions of similar size, and is a campus leader in patents, startups, and technology transfer. For more information, please visit www.engr.colostate.edu.