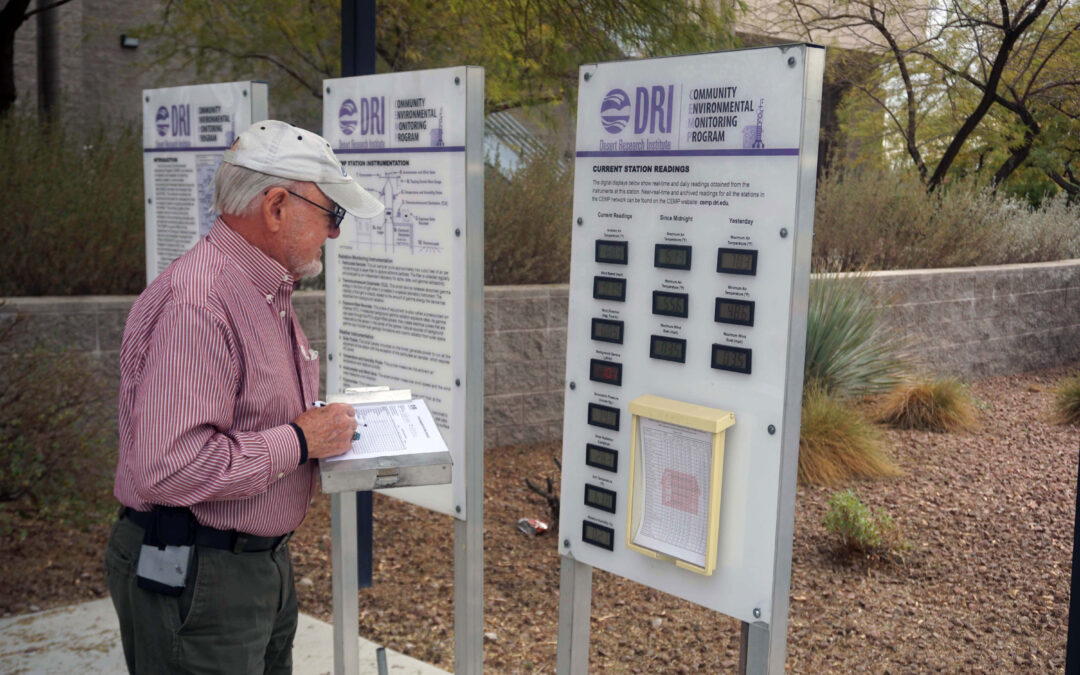 Imagine this: You live in a Southern Nevada community located close to a historic nuclear testing site. You’ve heard stories from older relatives about watching mushroom clouds from atomic testing back in the 1950s and stories about “downwinders” in neighboring states who later developed cancer. Although nuclear testing stopped almost three decades ago, you can’t help but wonder about the unseen hazards that might be carried in the air on windy days. Or what might be slowly seeping into your drinking water.

For residents of communities surrounding the Nevada National Security Site (NNSS), these concerns are not imaginary — they are questions of everyday life. The NNSS, formerly the Nevada Test Site, was ground zero for more than 900 underground and atmospheric nuclear tests between 1951 and 1992. Today, the NNSS is used for a variety of missions related to national security rather than as a full-scale nuclear testing site, but public concern about exposure to harmful radiation lives on.

For more than 40 years, DRI’s Community Environmental Monitoring Program (CEMP) has worked to address fears about radiation exposure and provide answers to the concerned public in communities surrounding the NNSS through a simple but impactful solution: putting radioactivity data in the hands of the people. 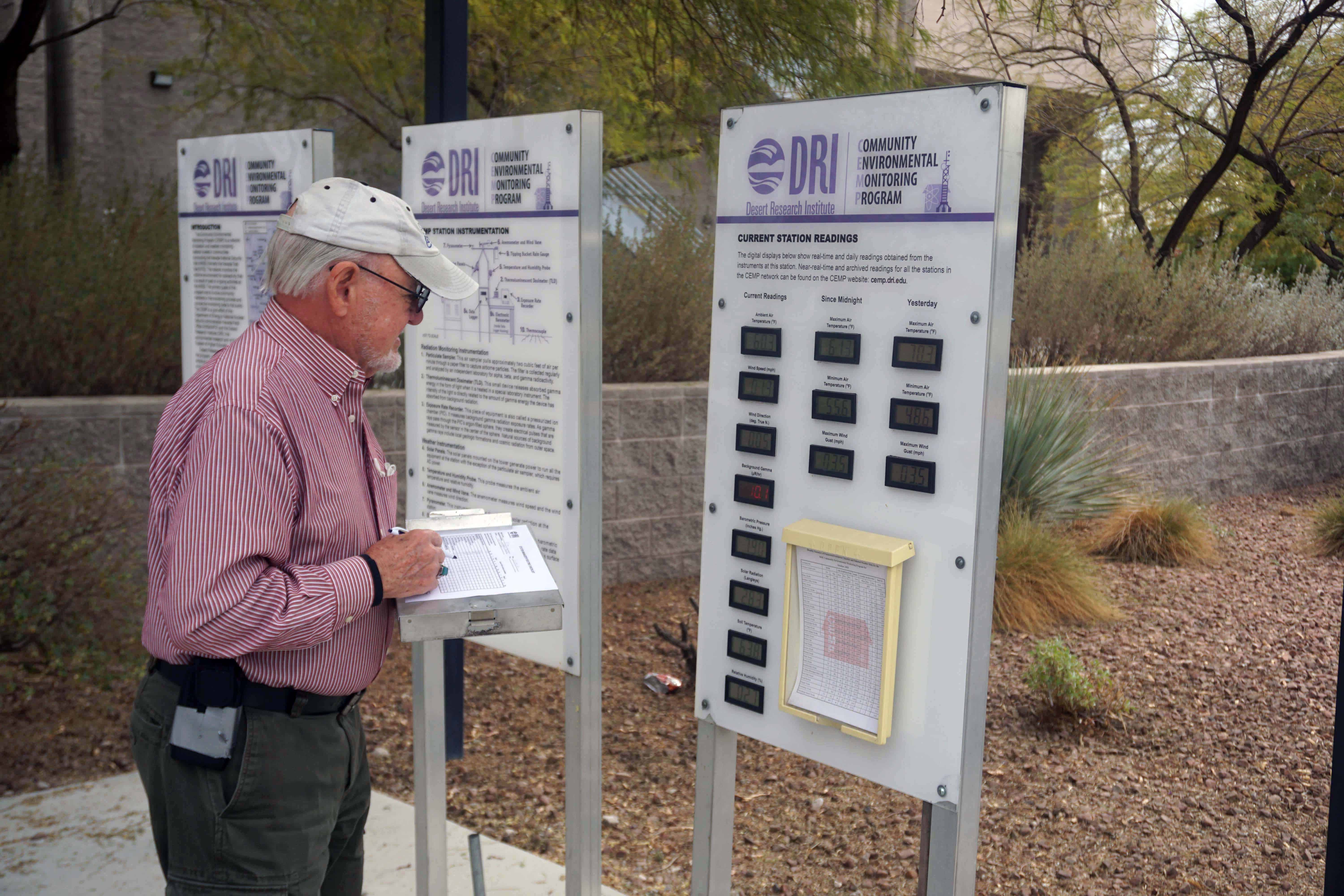 Station Manager Don Curry checks the gages at the Community Environmental Monitoring Program Station on the DRI campus in Las Vegas. Curry has been part of the CEMP since 1991.

Founded in 1981 as a collaborative effort involving DRI, the Environmental Protection Agency (EPA), and the Department of Energy (DOE), which funds the program through the National Nuclear Security Administration’s Nevada Field Office, the CEMP operates a network of 23 radiation and environmental monitoring stations spread throughout Southern Nevada, Utah, and California. Each station is staffed by pairs of local citizens who serve as points of contact for residents of their communities, and who are part of the official chain of custody for air filter samples they collect on a regular basis at the stations.

The program was born during a time when active nuclear testing was still going on at the NNSS. It was not long after the 1979 nuclear accident at Three Mile Island, and public distrust for the government was running high. In the aftermath of that accident, a group of local concerned citizens formed an independent monitoring network, which greatly improved public confidence in the monitoring process and results.  Scientists from the DOE and EPA who had been deployed to assist with the monitoring of the Three Mile Island accident brought the idea back to Nevada, and the CEMP was born. By providing communities surrounding the NNSS with the tools to monitor radioactivity themselves and trusted community members to help interpret the data, the CEMP proved a powerful way to address citizens’ fears and concerns.

“I’m a huge proponent of giving the public a hands-on role that goes way above and beyond what the regulations might require,” said CEMP Project Director Ted Hartwell of DRI. “All of these stations are placed with the idea that we want them to be very publicly visible. A lot of them are at schools. One is at the post office in Beatty and one is at the post office in Tecopa. We have one at Southern Utah University in Cedar City and one at the BLM offices in Ely. The whole idea is that they’re visible, they’ll attract attention, and they’re staffed by trusted neighbors.”

In 1999, full technical operation of the CEMP was turned over from the EPA to DRI, and Hartwell took the helm as project director. Stations were upgraded to include meteorological instrumentation, and DRI scientist Greg McCurdy developed a program website, which for the first time allowed members of the public to access radioactivity and weather data in near real-time. 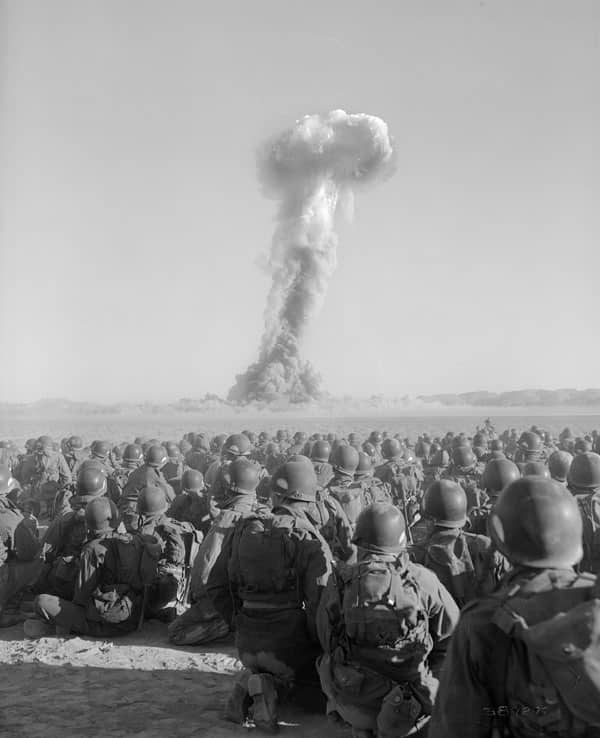 Many program participants are new arrivals, but some have been with the CEMP for decades. The people of the CEMP, says Hartwell, are the true power behind the program. They are responsible for collecting data, and more importantly, they are the connecting force that relays the data back to their communities. About half of the program participants are science teachers, who are encouraged to include the information they learn from the program into their lessons.

Don Curry, age 83, is one of the program’s longest-serving participants – a CEMP station manager in Las Vegas for more than 30 years. He began with the program in 1991, not long after moving to Las Vegas to teach high school biology. For Curry, the CEMP provided an amazing opportunity to integrate real-world environmental data into the lessons that he did with his students.

“My students would go to the CEMP station to check on it; some took it on as their own class research projects and started communicating with other station managers in Utah and Nevada,” Curry said. “I used it in my environmental science classes to teach kids about radiation and how it affects the environment. We also worked with the EPA to develop an international radon testing network, where we collected samples from all over the world, and kids learned how to do radon testing themselves.”

The long-term impact of the program on his students was significant, Curry said.

“Anything that shows kids what a professional scientist does is astounding to them; it gives them a foot in the door. For a kid to see that they can have a career and get paid for working in science, that’s very cool. Having kids exposed to that is very important.”

Curry retired from teaching in 2009 but remains active as an AP biology tutor and visits his CEMP station several times per week. For Curry, some of the best parts about being a CEMP station manager have been the opportunity to participate in things that are happening at DRI  and the tremendous amount he has learned about radiation issues.

Each summer, the CEMP organizes a workshop for program participants, in which prominent experts from the radiation research community are invited to speak on timely topics – for example, updates from Chernobyl or Fukushima. These are typically held in person, although the past two years’ workshops were held virtually due to COVID.

“The CEMP has been one of the highlights of my career because it has connected me to numerous things in many directions,” Curry said. “While I was teaching, it was one of the most important things I did all year. Now that I’m retired, I love having the CEMP as a small window into all of the things that are happening at the DRI campus.” 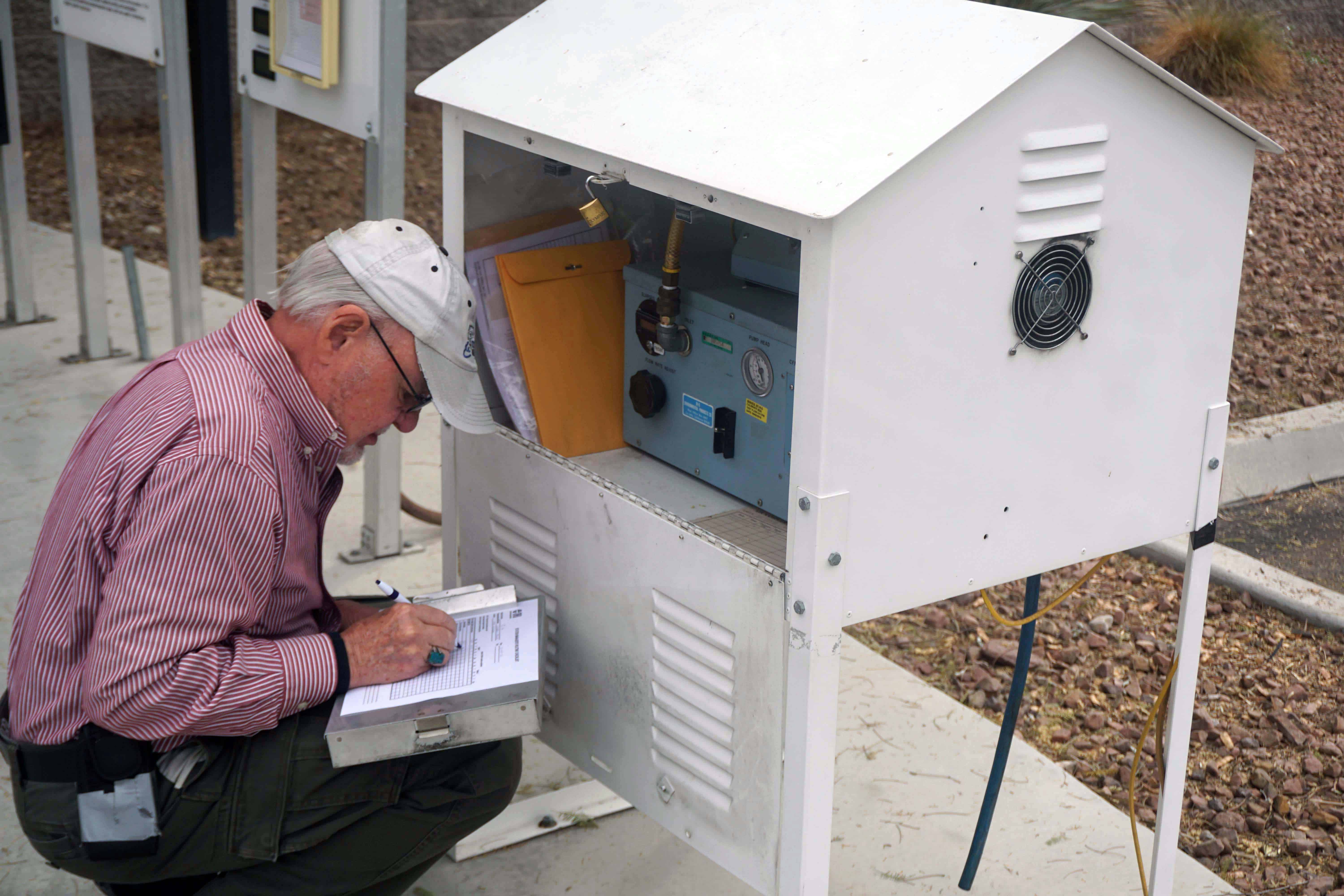 So, what has the CEMP learned over 40 years of radioactivity monitoring? For the most part, they’ve been able to show their communities that there’s nothing to be afraid of.

“This is a program that’s been around for a lot of years, but we’ve never seen anything that would be of concern to the general population,” said Don Newman, another long-time CEMP participant who began as a station manager in Cedar City, Utah in 1990.

CEMP data has helped dispel rumors and ease fears when accidents occur near the NNSS. Once, they were able to prove that a small test rocket that landed near Goldfield, Nevada was not nuclear-related. Another time, the data helped ease public concerns after an accident involving medical isotopes on the highway between Beatty and Goldfield.

The Fukushima nuclear accident in 2011 was a big moment for the program, Hartwell and Newman recall. The CEMP stations were the first to both detect and publicly report the detection of radionuclides from that accident in Japan here in Nevada.

“That was a pretty serious event, but it also really showed that our network was functioning as it should,” Hartwell said. “We were able to pick up these radionuclides of concern from a source several thousands of miles away, and yet we haven’t detected anything like that coming from the NNSS, which is just 75 or 100 miles up the road from Las Vegas, since full-scale testing ceased in 1992.

“Additionally, we were able to assist our local representatives in conveying accurate information to their communities to help them realize that, while we were certain that we were detecting radionuclides from an accident thousands of miles away, the exposure levels were thousands to millions of times less here in the United States than the ionizing radiation we’re exposed to 24/7 from the natural environment,” Hartwell added.

As time passes, public concern has shifted from the risk of airborne radiation to concern about what is in the groundwater, says Hartwell. About ten years ago, contaminants were detected in the groundwater outside the boundaries of the NNSS, but still a long way from public water sources.

The CEMP has performed water testing in the communities that are downgradient from the NNSS for decades, and works closely with Nye County, which operates a separate community-based water monitoring program, to convey the results of these studies to participants. At present, they have not detected any traces of contamination in the water, but if they do, their communities can rest assured that the CEMP monitors will be the first to let them know about it.

“It’s one of those programs where it goes along quietly for a long time, then there’s some event that CEMP participates in that really brings home the importance of the program,” said Hartwell.

For more information on the CEMP, please visit: https://cemp.dri.edu/. CEMP personnel are  happy to provide presentations for classrooms, organizations or events. If you have a group interested in a presentation on the CEMP and the history of nuclear testing in Nevada, please contact Ted Hartwell (Ted.Hartwell@dri.edu) or place a presentation request through the project website: CEMP Presentation Request Form (dri.edu).