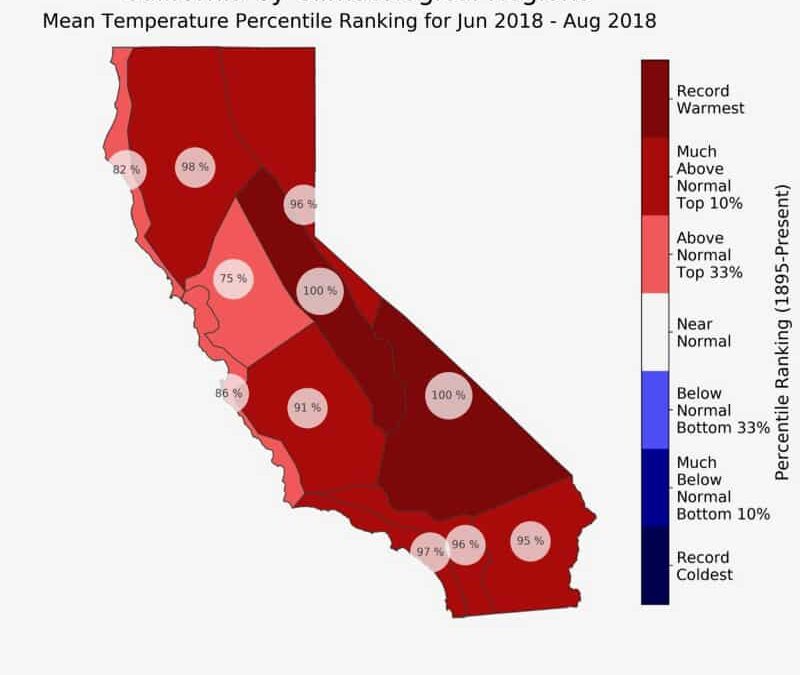 Reno, NV (Sept 10, 2018) – Scientists from the Western Regional Climate Center (WRCC) at the Desert Research Institute (DRI) in Reno, NV are pleased to announce the release of a long-awaited update to a climate mapping tool called the California Climate Tracker (https://wrcc.dri.edu/Climate/Tracker/CA/).

Originally launched in 2009, the California Climate Tracker was designed to support climate monitoring in California and allows users to generate maps and graphs of temperature and precipitation by region. The 2018 upgrade incorporates substantial improvements including a more user-friendly web interface, improved accuracy of information based on PRISM data, and access to climate maps and data that go back more than 120 years, to 1895. 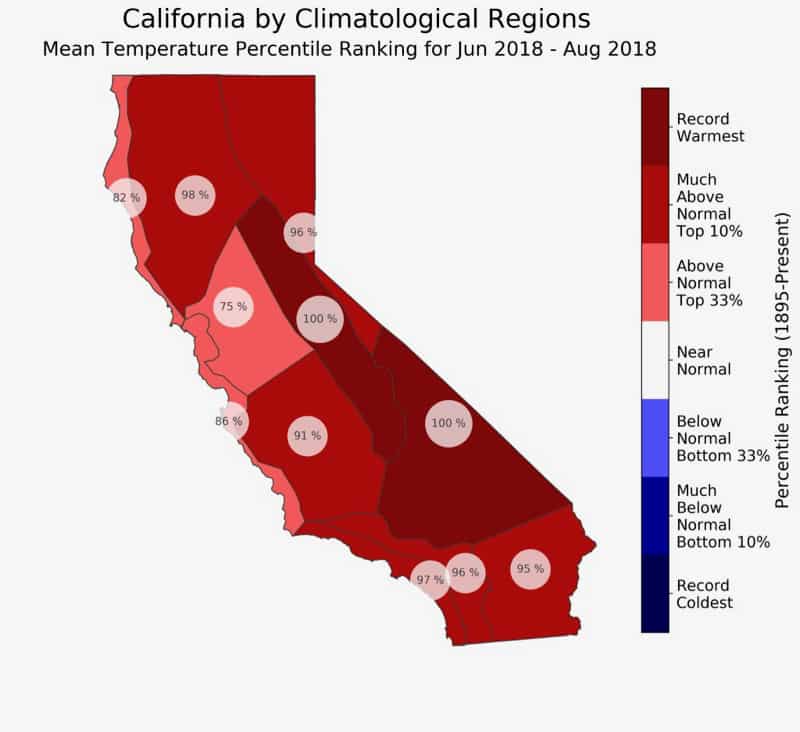 “One really significant change between the old and new versions of the California Climate Tracker is that in the previous version, you weren’t able to look at archived maps,” said Daniel McEvoy, Ph.D., Assistant Research Professor of Climatology at DRI and member of the Climate Tracker project team. “Now you can say for example, ‘I want to see what the 1934 drought looked like,’ and go back and get the actual maps and data from 1934. You can also look at graphs of the data and see trends in temperature and precipitation over time.”

In addition to providing historical and modern data for regions across California, this easy-to-use web-based tool can be used to produce publication-quality graphics for reports, articles, presentations or other needs. It can be accessed for free by anyone with a standard web browser and an internet connection.

“The California Climate Tracker was initially designed and developed for use by the California Department of Water Resources, but we hope it is also useful to a much broader community of water managers, climatologists, meteorologists and researchers in California,” McEvoy said. 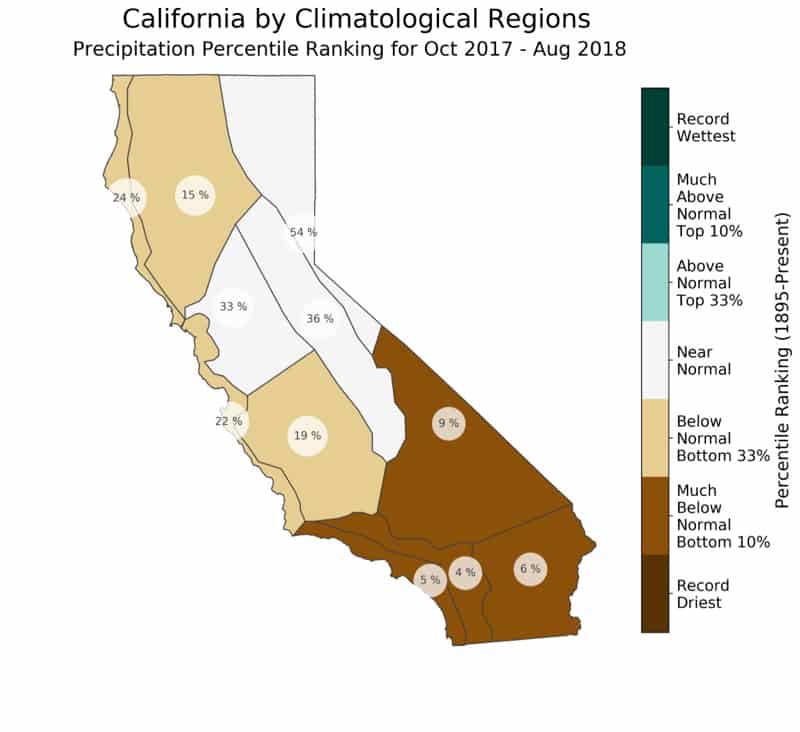 The recent upgrade to this tool was the work of Nina Oakley, Ph.D., Justin Chambers, and McEvoy, all of whom are part of the Western Regional Climate Center at DRI. The original version of the California Climate Tracker tool was developed at DRI and designed by John Abatzoglou, Ph.D., now of the University of Idaho, based on a system for identifying regional patterns of climate variability within the state of California that he developed with Laura Edwards, M.S, now State Climatologist and Climate Field Specialist for the South Dakota State Climate Office, and the late Kelly Redmond, Ph.D., former regional climatologist for WRCC and DRI.

The California Climate Tracker was built with support from and in collaboration with the California Department of Water Resources. The team is currently in the process of building a similar tool for Nevada and are seeking funding partners to sponsor that work.

RENO, Nev. (July 14, 2017) – Recently published research led by atmospheric scientists at the Desert Research Institute (DRI) demonstrates a connection between the occurrence of atmospheric river (AR) events and avalanche fatalities in the West.

Published in the May issue of the Journal of Hydrometeorology, the pilot study assessed avalanche reports, weather station data, and a catalog of AR data from a previous study to determine that AR conditions were present for 105 unique avalanches between 1998 and 2014, resulting in 123 fatalities (31 percent of all western avalanche fatalities during this time frame).

Atmospheric Rivers, as described by the National Oceanic and Atmospheric Administration (NOAA), are “relatively long, narrow regions in the atmosphere – like rivers in the sky – that transport most of the water vapor outside of the tropics.”

When ARs make landfall on the West Coast of the US they release water vapor as rain or snow, supplying 30 to 50 percent of annual precipitation in the West and contributing to cool season (November to April) extreme weather events and flooding.

“Although ARs are less frequent in inland locations, they have relatively more important roles in intermountain and continental regions where snowpacks are characteristically weaker and less capable of supporting heavy rain or snowfall,” explained Benjamin Hatchett, a postdoctoral fellow of meteorology at DRI and lead author on the study.

The study also reports that shallow snowpacks weakened by persistent cold and dry weather can produce deadly and widespread avalanche cycles when combined with AR conditions. Climate projections indicate that this combination is likely to become more frequent in the mid- to late- 21st century, which could create significant avalanche risk to winter backcountry enthusiasts in the West.

“With increasing numbers of recreational backcountry users and changing mountain snowpack conditions, we might expect the future to be characterized by enhanced exposure to avalanche hazard throughout the western United States,” Hatchett said. “Our results provide motivation to further increase public awareness about avalanche threats during AR events.”

Including integrated vapor transport (IVT) forecasting tools in analyses of avalanche danger, researchers suggest, could potentially allow experts to increase the accuracy of avalanche forecasts when AR conditions are present. These tools can identify structure and movement of ARs when they make landfall, and also model how ARs move inland through gaps in mountainous terrain and cause heavy precipitation further inland.

“Our study provides motivation for additional examinations of avalanche data and meteorological conditions,” Hatchett said. “Our team recommends that following all, but especially fatal, avalanches, as much detailed information should be recorded as possible so that the field can continue to learn about the relationship between atmospheric river events and avalanches.”

The full version of the study – “Avalanche Fatalities during Atmospheric River Events in the Western United States” – is available online at the link below. http://journals.ametsoc.org/doi/full/10.1175/JHM-D-16-0219.1