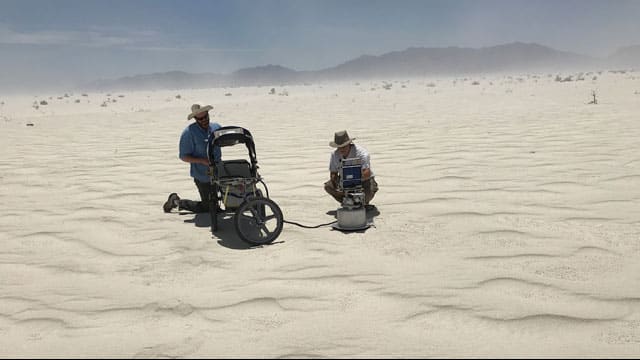 “We chose these sites because the gypsum dunes and playa lake environments should be hot spots for dust emission, and the Monahans composed of mostly pure quartz grains should be a low dust emission system. We were wrong about the Monahans,” Forman said.

The researchers utilized a Portable In Situ Wind Erosion Laboratory (PI-SWERL) to measure the dust emission potential in the field. The PI-SWERL, which was developed by a team from DRI, is a circular wind-erosion device, measures concentrations of inhalant particulate matter at different friction velocities from soil surfaces.

“The PI-SWERL is wind tunnel wrapped into a circle which makes this novel technology portable,” Forman said. “Thus, we can quantify the winds speeds and forces necessary to loft small, breathable particle sizes that at certain elevated concentrations induce an asthmatic response and heightened risk of pulmonary mortality and morbidity.”

The PI-SWERL measurements showed considerable differences in the dust emission potential across both systems. Active dunes, sand sheets and interdunes at White Sands generated similarly high dust fluxes. Comparatively, the playa had the widest range of fluxes with the lowest fluxes on moist or hard surfaces and the highest where loose sand and aggregates were at the surface.

The results revealed intra- and extra-landform variability in dust fluxes from eolian systems, mostly due to the degree of surface crusting or soil moisture. More dust occurs on surfaces with loose sand or aggregates where saltation bombardment, when wind lifts particles and causes them to hit along the surface with increased velocity, could erode playas or interdunes and aggregates could break apart to create more dust.

Surprisingly, White Sands showed high magnitudes of dust emission from the abrasion of dune sand and erosion of playa sediments, indicating both landforms are particulate sources during dust storms. The Monahans system produced low dust emissions due to low rates of abrasion in active dunes and vegetative cover, which protects the surface from wind erosion. However, the most common landforms — sand sheets that surround the dune fields for miles — are rich sources for fine breathable particles, at the same magnitude as White Sands.

“The most surprising results was variability in dust emissivity for White Sands landforms and the very high dust flux from the flat sand sheet area that covers most surfaces in west Texas. There is a hidden dust source in these deposits and soils, which were unrecognized,” Forman said.

“Atmospheric dust concentrations are important for the global heat-balance and locally can lead to a thermal-blanking effect raising local temperatures. Recent studies associate ozone degradation with elevated dust concentrations high in the atmosphere,” Forman said. “As our planet warms from increasing greenhouse gases many deserts will expand, and grassland areas like on the Southern High Plains will diminish, revealing a limitless supply of dust that will worsen aridity and is detrimental to human health. Understanding the land surface response to climate warming is critical for future sustainability.”

Baylor University is a private Christian University and a nationally ranked Research 1 institution. The University provides a vibrant campus community for more than 20,000 students by blending interdisciplinary research with an international reputation for educational excellence and a faculty commitment to teaching and scholarship. Chartered in 1845 by the Republic of Texas through the efforts of Baptist pioneers, Baylor is the oldest continually operating University in Texas. Located in Waco, Baylor welcomes students from all 50 states and more than 90 countries to study a broad range of degrees among its 12 nationally recognized academic divisions.