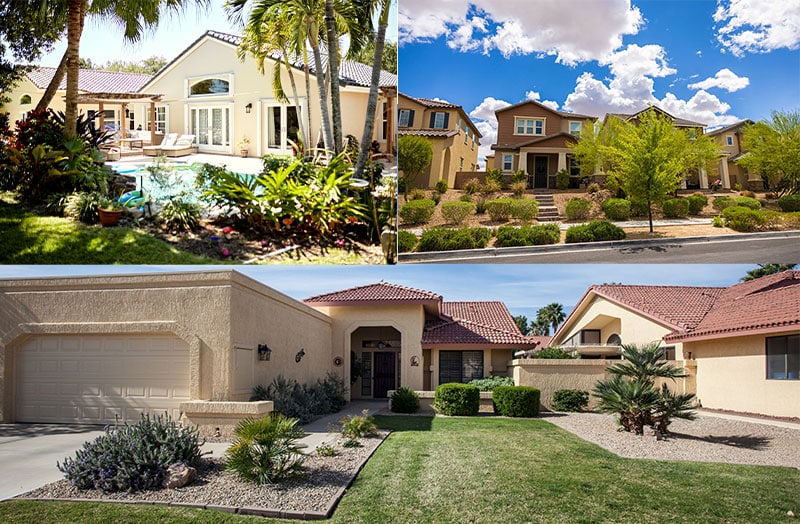 Removing turf-grass saves water. But will it increase urban heat?

As Las Vegas and other Southwestern cities look for ways to reduce water use during a historic drought, the removal of grass lawns and other areas of “nonfunctional turf” has been recommended by the Southern Nevada Water Authority and written into Nevada state law with AB356. But, will this change from turf-grass to other landscaping types result in other unintended climate impacts in urban areas, such as increased air or surface temperatures?

In a new study in the journal Hydrology, a team of scientists from DRI, Arizona State University (ASU), and the University of Nevada, Las Vegas (UNLV), examined the irrigation water requirements of three common types of urban landscapes. Then, they compared air temperature, surface temperature, and wind speed around the three sites to learn how differences in landscape types impact their surrounding environment.

The three landscape types analyzed in the study were a “mesic” tree and turf-grass landscape with water-intensive plants; a “xeric” landscape consisting primarily of desert plants on drip irrigation; and an intermediate “oasis” landscape type with a mix of high-and low water use plants. The sites were located around buildings in an experimental study area at ASU in Phoenix.

As expected, the mesic (tree and turf-grass) landscape showed the highest water consumption rate. However, the mesic site also had the lowest surface and air temperatures, both in the daytime and nighttime, thus creating better conditions for outdoor thermal comfort.

The site with xeric (desert) landscaping had the lowest irrigation water requirement but the highest temperatures. Air temperatures in the xeric landscape plot averaged 3oC (5.4oF) higher than in the other two landscape types.

The oasis landscape, with a mix of high- and low-water use plants, provided the best of both worlds – lower irrigation water requirements than the mesic site but more daytime cooling than the xeric landscape.

“The simple take-home message from what we learned was that xeric (desert) landscaping is not the best long-term solution and neither is mesic (tree-turf),” said the study’s lead author Rubab Saher, Ph.D., Maki postdoctoral research associate at DRI. “An ‘oasis’ style landscape, which contains trees like Acacia or ghost gum, and shrubs like dwarf poinciana, requiring light irrigation, are the best solution, because it conserves water but also contributes to cooling through the evapotranspiration of the plants.”

The study also examined the role of buildings and open sky to understand the effect of shade on the landscape. They found that shade in the narrow space between buildings created shade of comparable temperature to that under a tree in a mesic landscape and are interested in doing follow-up studies to learn more about the impact of building orientation on maximizing summer shade.

“I became interested in this topic because urban irrigation and water efficient landscaping are really important issues in the Western U.S., but haven’t been studied very thoroughly,” said Saher. “People have been applying methods for calculating irrigation from agricultural fields, but urban areas are very different landscapes, and the ways that homeowners irrigate are very unpredictable.”

The authors hope that their findings are helpful to homeowners, city planners, or anyone trying to help conserve water but prevent warming temperatures in arid urban regions.

“Removing turf grass from the landscape is an excellent approach for saving water, but if we remove all the turf grass, the temperature will go up,” Saher said. “For every acre of turf grass removed, we also need to plant native and/or rainfed trees to make arid cities livable in the long run.”

The full study, Assessing the Microclimate Effects and Irrigation Water Requirements of Mesic, Oasis, and Xeric Landscapes, is available from Hydrology: https://www.mdpi.com/2306-5338/9/6/104

Arizona State University, ranked No. 1 “Most Innovative School” in the nation by U.S. News & World Report for seven years in succession, has forged the model for a New American University by operating on the principles that learning is a personal and lifelong journey for everyone, and that people thrive on experience and discovery that cannot be bound by traditional academic disciplines. Through innovation and a commitment to educational access, ASU has drawn pioneering researchers to its faculty even as it expands opportunities for qualified students.

UNLV is a doctoral-degree-granting institution of more than 30,000 students and nearly 4,000 faculty and staff that has earned the nation’s highest recognition for both research and community engagement from the Carnegie Foundation for the Advancement of Teaching. UNLV offers a broad range of respected academic programs and is committed to recruiting and retaining top students and faculty, educating the region’s diverse population and workforce, driving economic activity, and creating an academic health center for Southern Nevada. Learn more at unlv.edu.