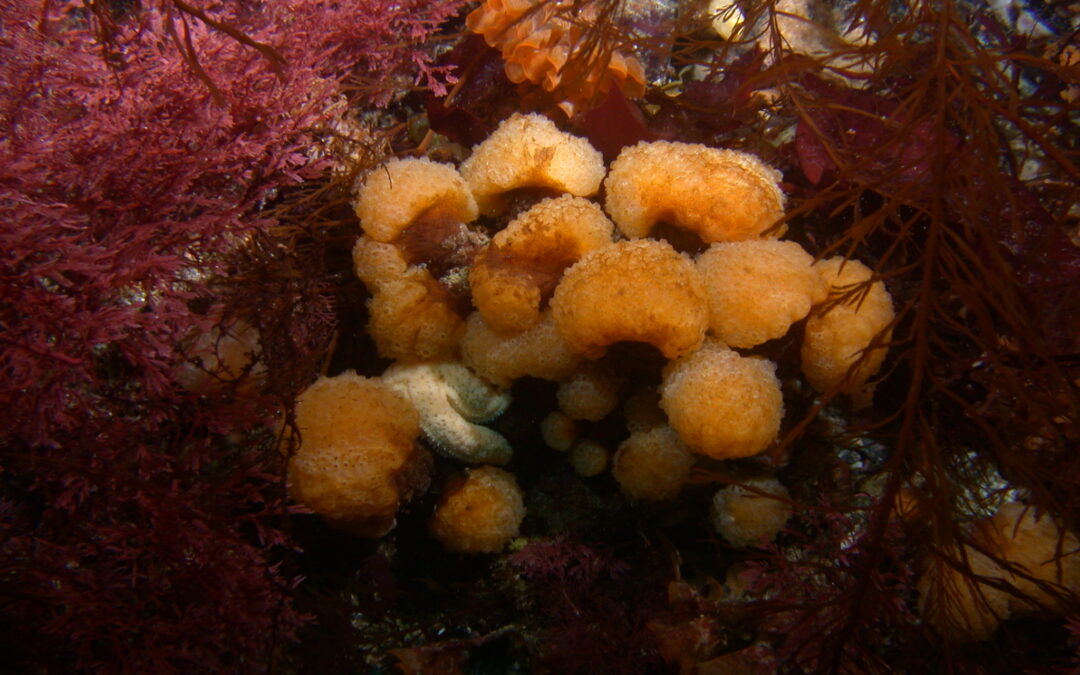 Could the cure for melanoma – the most dangerous type of skin cancer – be a compound derived from a marine invertebrate that lives at the bottom of the ocean? A group of scientists led by Alison Murray, Ph.D. of the Desert Research Institute (DRI) in Reno think so, and are looking to the microbiome of an Antarctic ascidian called Synoicum adareanum to better understand the possibilities for development of a melanoma-specific drug.

Ascidians, or “sea squirts”, are primitive, sac-like marine animals that live attached to ocean-bottoms around the world, and feed on plankton by filtering seawater. S. adareanum, which grows in small colonies in the waters surrounding Antarctica, is known to contain a bioactive compound called “Palmerolide A” with promising anti-melanoma properties – and researchers believe that the compound is produced by bacteria that are naturally associated with S. adareanum.

In a new paper published this month in the journal Marine Drugs, Murray and collaborators from the University of South Florida, the Los Alamos National Laboratory, and the Université de Nantes, France, present important new findings measuring palmerolide levels across samples collected from Antarctica’s Anvers Island Archipelago and characterizing the community of bacteria that make up the microbiome of S. adareanum.

“Our longer-term goal is to figure out which of the many bacteria within this species is producing palmerolide, but to do this, there is a lot we need to learn about the microbiome of S. adareanum,” Murray said. “Our new study describes many advances that we have made toward that goal over the last few years.” 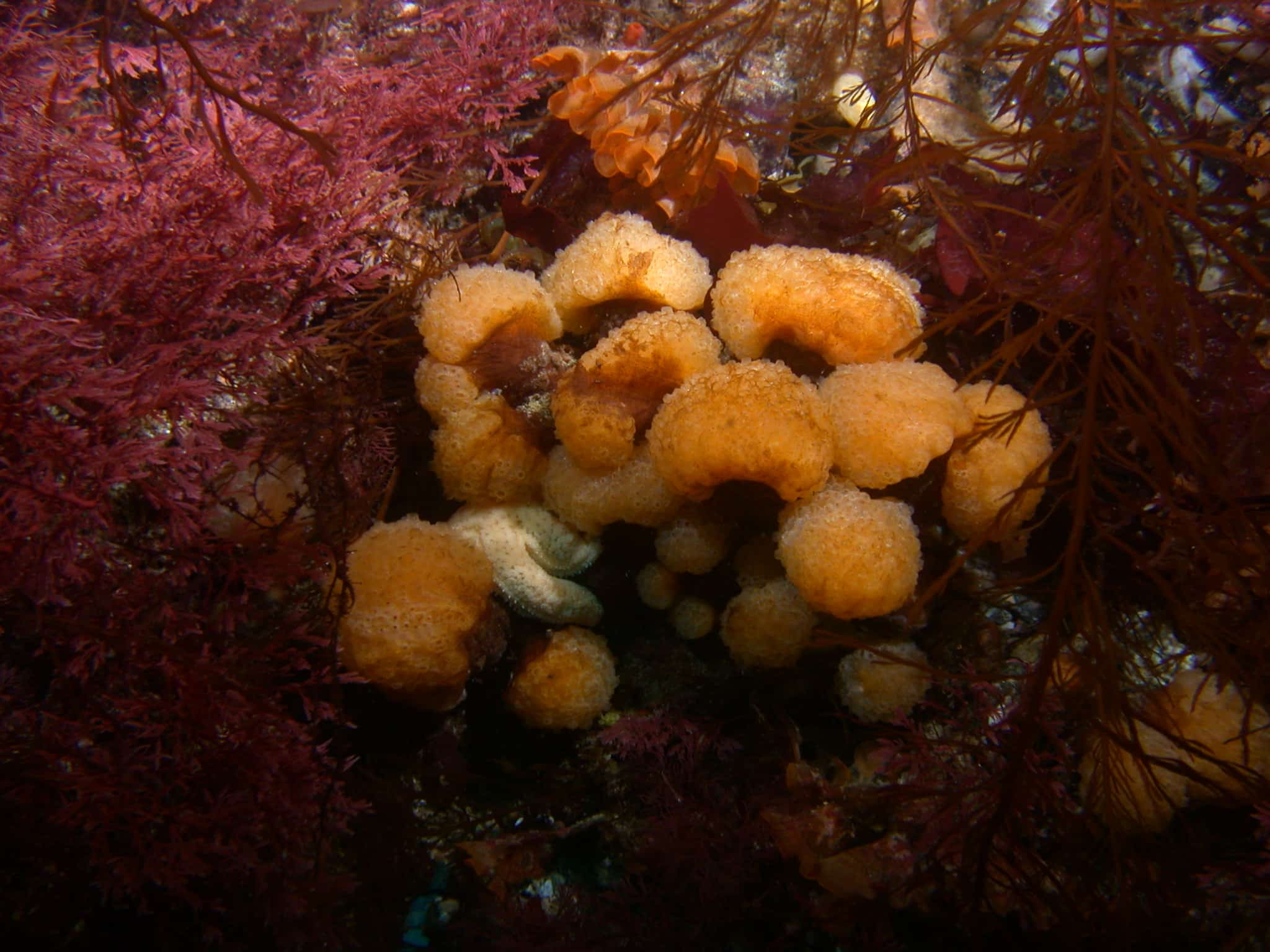 Synoicum adareanum: The Antarctic sea squirt, Synoicum adareanum at 80’ (24 meters) lives amongst the red algae, bryozoans and starfish on the seafloor. It is a non-motile benthic species that gets its nutrition from microorganisms and organic carbon in the seawater. Its microbiome hosts a suite of different microorganisms that can provide defenses against predation and infection in some cases. Tissues of this animal were found to contain high levels of a compound that is active against melanoma, which is thought to be produced by a member of the sea squirt’s microbiome. 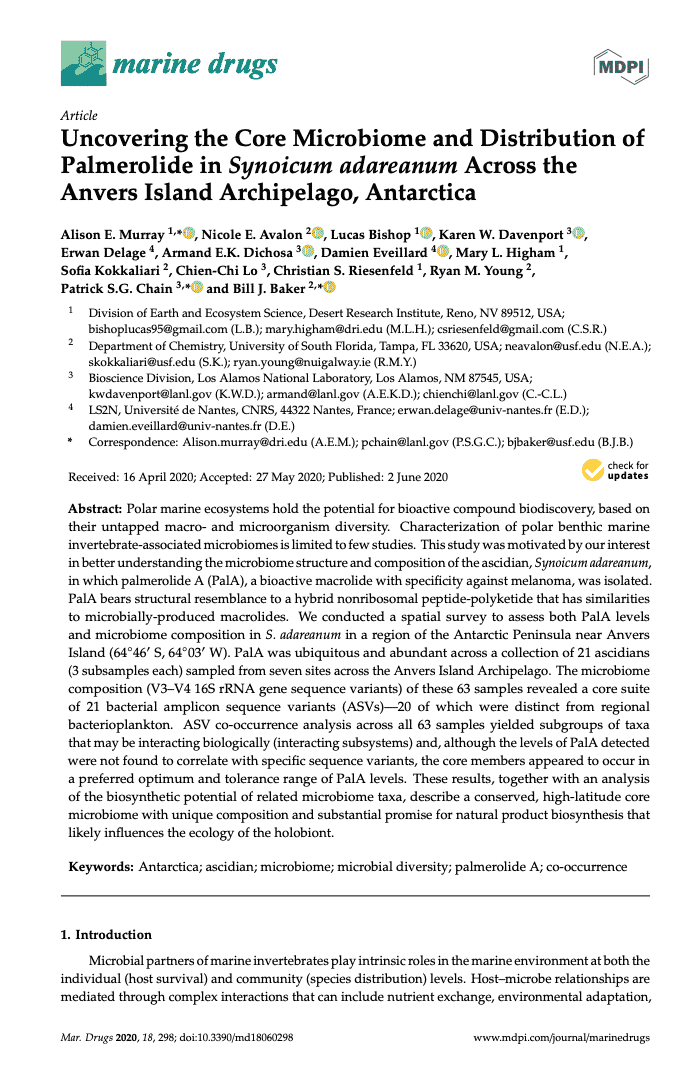 Uncovering the Core Microbiome and Distribution of Palmerolide in Synoicum adareanum Across the Anvers Island Archipelago, Antarctica. (click to view article)

“It is a key “first” for Antarctic science to have been able to find and identify this core microbiome in a fairly large regional study of these organisms,” Murray said. “This is information that we need to get to the next step of identifying the producer of palmerolide.”

Another “first” for Antarctic science, and for the study of natural products in nature in general, was a comparison of palmerolide levels across all 63 samples that showed the compound was present in every specimen at high (milligram per gram specimen tissue) levels, but the researchers found no trends between sites, samples, or microbiome bacteria. Additional analysis looking at the co-occurrence relationships of the taxa across the large data set showed some of the ways that bacteria are interacting with each other and with the host species in this marine ecosystem.

“The microbiome itself is unique in composition from other ascidians, and seems to be pretty interesting, with a lot of interaction,” Murray said. “Our study has opened the doors to understand the ecology of this system.”

From the assemblage of bacteria that the researchers have identified as making up the core microbiome of S. adareanum, they next hope to use a genomics approach to finally be able to identify which of the bacteria are producing palmerolide – an important and needed advancement toward the development of a melanoma treatment.

“It would be a really big deal to use this compound to develop a drug for fighting melanoma, because there are just so few drugs at the moment that can be used to treat it,” Murray said. “If we can identify the bacteria that produce this chemical, and with its genome understand how to cultivate it in a laboratory setting, this would enable us to provide a sustainable supply of palmerolide that would not rely on harvesting wild populations of this species in Antarctica.” 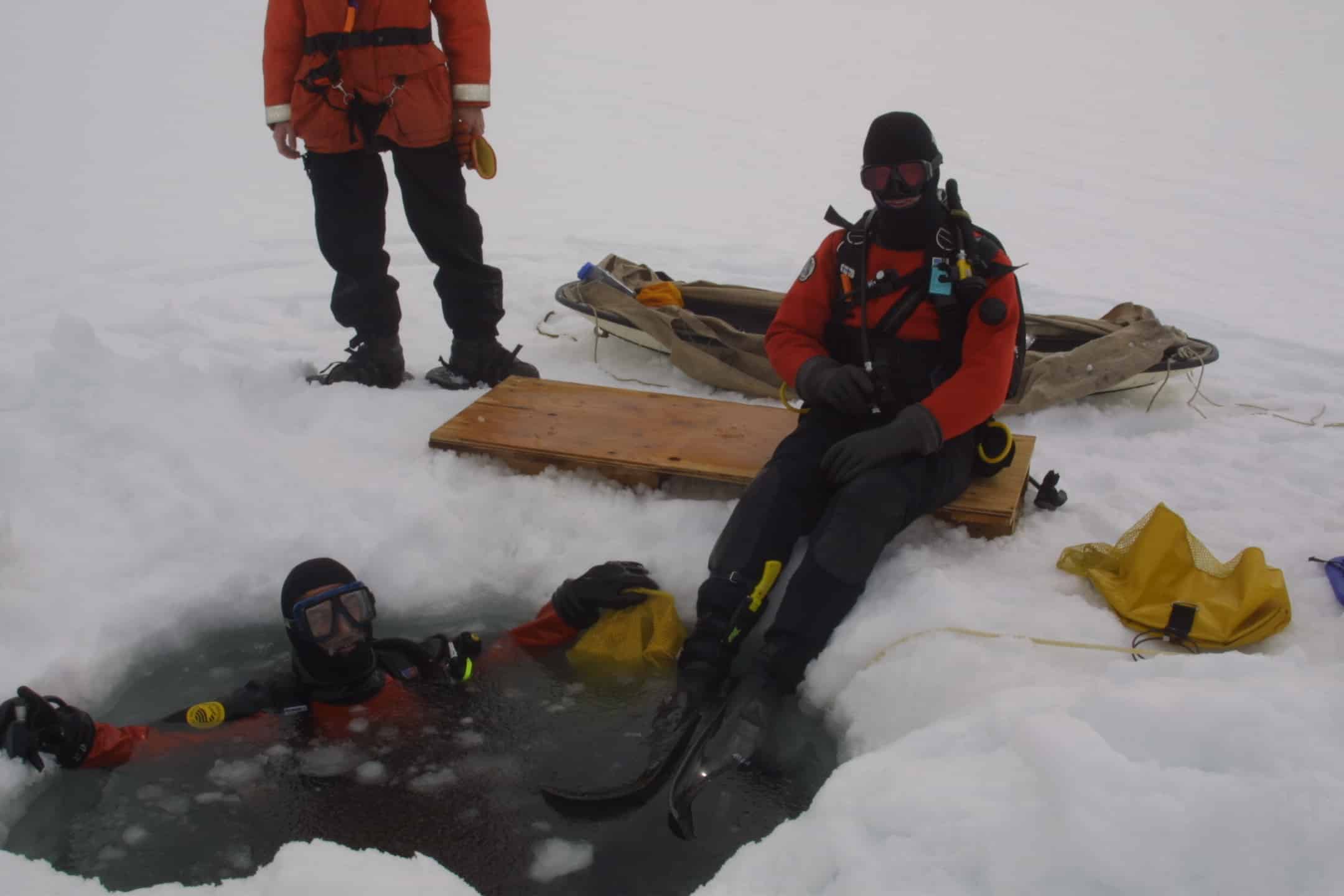 Anvers Island Antarctica: Samples for microbiome characterization were collected by SCUBA divers working on the sea ice off Anvers Island, in the Antarctic Peninsula. Diving through holes cut in the sea ice requires dry suites, and relatively short dive times. (photographed Prof. Bill Baker in the hole, and his graduate student Chris Petri suited on the sled). 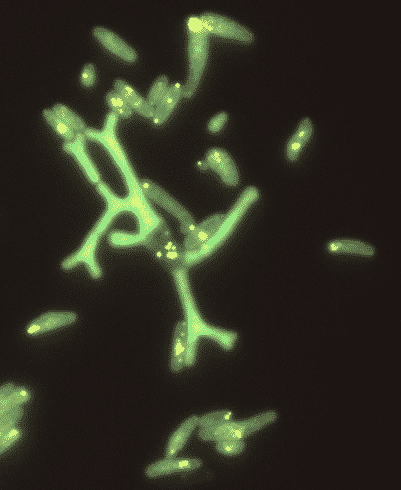 DNA-stained micrograph: Cultivation efforts led to isolation of a new bacterial species affiliated with the Pseudovibrio genus – a group known to produce bioactive compounds – this is the first cold-adapted member of this genus. This strain has unusual branching morphology (seen in the DNA-stained micrograph), and storage granules that appear yellow.

“It is a key “first” for Antarctic science to have been able to find and identify this core microbiome in a fairly large regional study of these organisms,” Murray said. “This is information that we need to get to the next step of identifying the producer of palmerolide.”

The full text of the study, “Uncovering the Core Microbiome and Distribution of Palmerolide in Synoicum adareanum Across the Anvers Island Archipelago, Antarctica,” is available from Marine Drugs: https://www.mdpi.com/1660-3397/18/6/298/htm 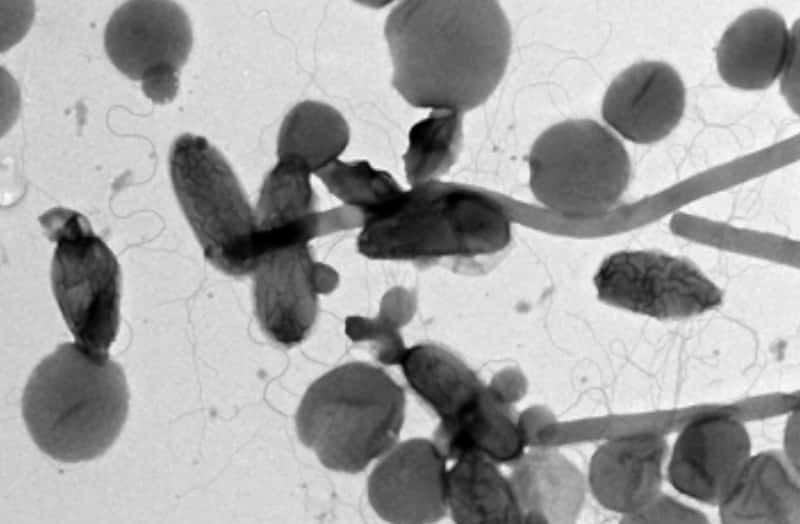 The long-standing rules for assigning scientific names to bacteria and archaea are overdue for an update, according to a new consensus statement backed by 119 microbiologists from around the globe.

Bacteria and archaea (single-celled organisms that lack cell nuclei) make up two of the three domains of life on Earth, and are named according to the International Code of Nomenclature of Prokaryotes (ICNP; the Code). At present, the Code only recognizes species that can be grown from cultures in laboratories – a requirement that has long been problematic for microbiologists who study bacteria and archaea in the wild.

Since the 1980s, microbiologists have used genetic sequencing techniques to sample and study DNA of microorganisms directly from the environment, across diverse habitats ranging from Earth’s icy oceans to deep underground mines to the surface of human skin. For a vast majority of these species, no method yet exists for cultivating them in a laboratory, and thus, according to the Code, they cannot be officially named.

“There has been a surge in recent years in genome-based discoveries for archaea and bacteria collected from the environment, but no system in place to formally name them, which is creating a lot of chaos and confusion in the field,” said Alison Murray, Ph.D., Research Professor of Biology at the Desert Research Institute (DRI) in Reno. “Being able to represent the diversity of uncultivated organisms known by their genome sequences in a common language is incredibly important.” 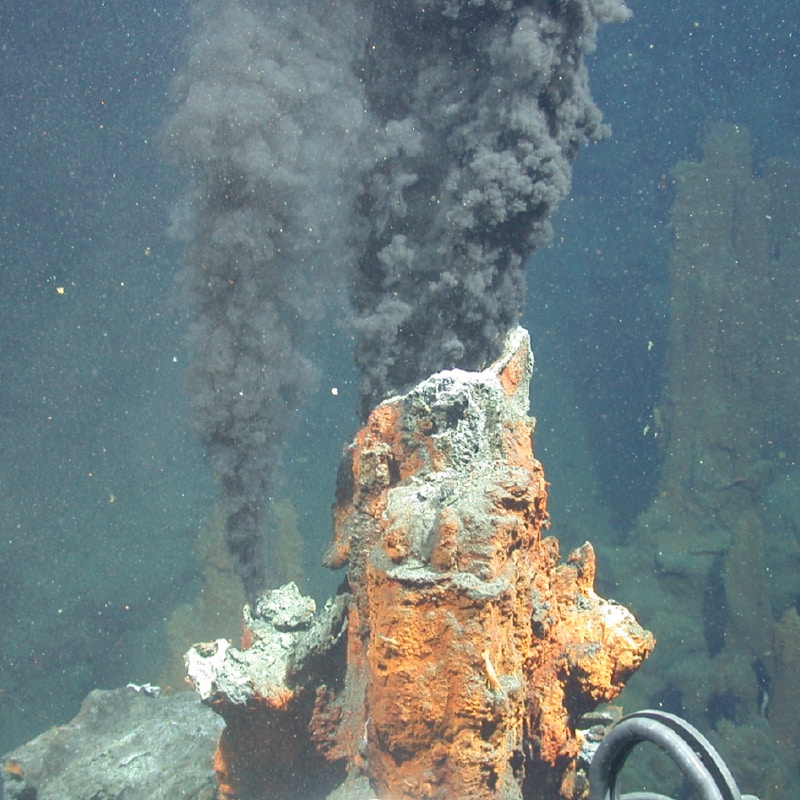 Deep-sea hydrothermal vent chimney from the Mid-Atlantic Ridge. Many new microbial genomes have been described from these environments. 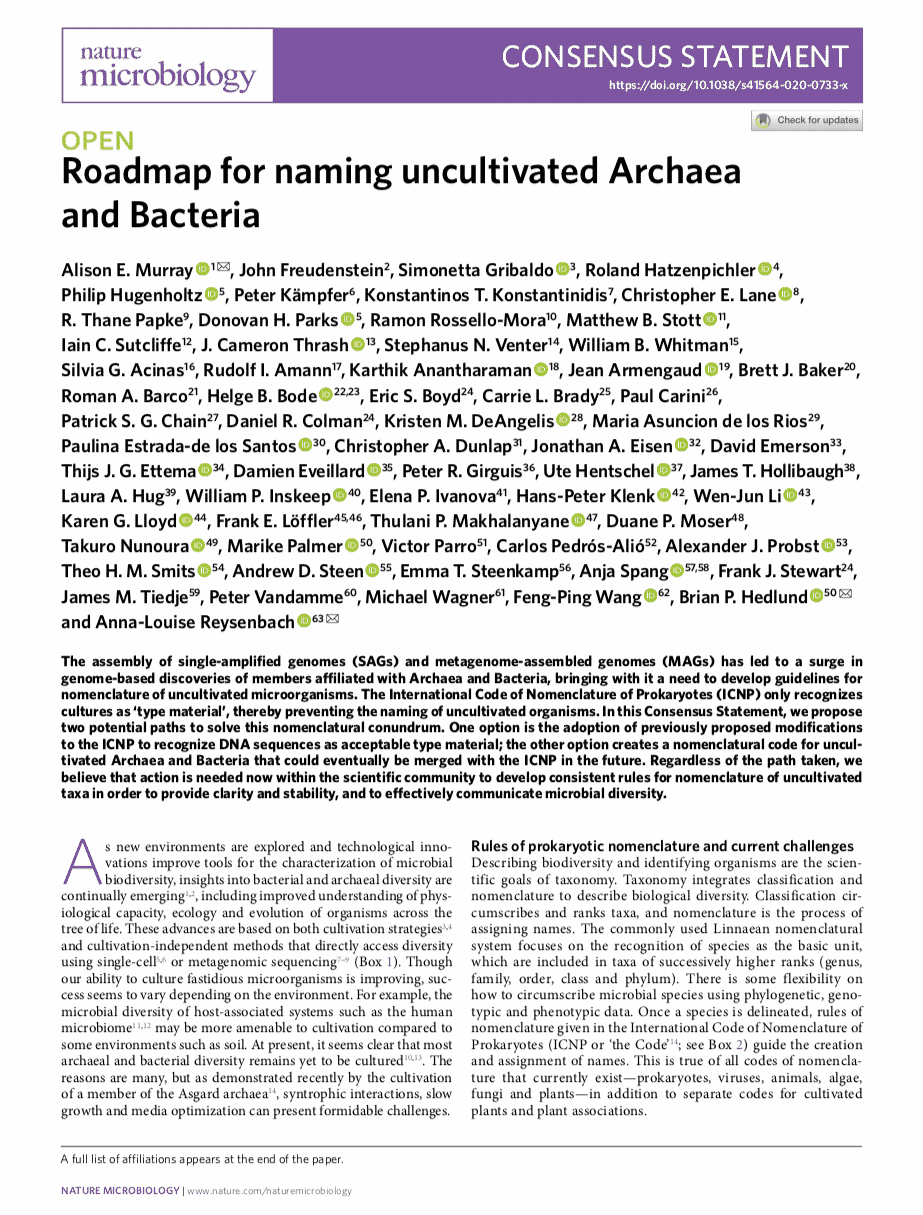 In an article published this week in the journal Nature Microbiology, Murray and her collaborators present the rationale for updating the existing regulations for naming new species of bacteria and archaea, and propose two possible paths forward.

As a first option, the group proposes formally revising the Code to include uncultivated bacteria and archaea represented by DNA sequence information, in place of the live culture samples that are currently required. As an alternative, they propose creating an entirely separate naming system for uncultivated organisms that could be merged with the Code at some point in the future.

“For researchers in this field, the benefits of moving forward with either of these options will be huge,” said Brian Hedlund, Ph.D., Professor of Life Sciences at the University of Nevada, Las Vegas. “We will be able to create a unified list of all of the uncultivated species that have been discovered over the last few decades and implement universal quality standards for how and when a new species should be named.”

For example, researchers who use DNA sequencing to study the human microbiome – the thousands of species of Bacteria and Archaea that that live inside and on the human body – would have a means of assigning formal names to the species they identify that are not yet represented in culture collections. This would improve the ability for researchers around the world to conduct collaborative studies on topics such as connections between diet and gut bacteria in different human populations, or to build off of previous research. 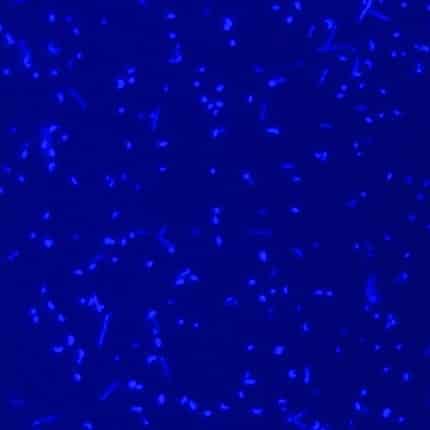 This micrograph is a representative Antarctic marine sample of bacteria and archaea that has been stained with a fluorescent dye (DAPI) that binds to DNA.  A typical sample of Antarctic seawater harbors 200 to over 600 different taxa based on the diversity of 16S rRNA gene sequences. Only a small fraction of this diversity, < 1%, has been cultivated, or matches sequences of cultivated bacteria and archaea in publicly accessible databases. Through developing a nomenclature system that represents the uncultivated majority, a path for communicating diversity will benefit particularly, those microbial scientists working in natural, bio-engineered, and host-associated ecosystems. 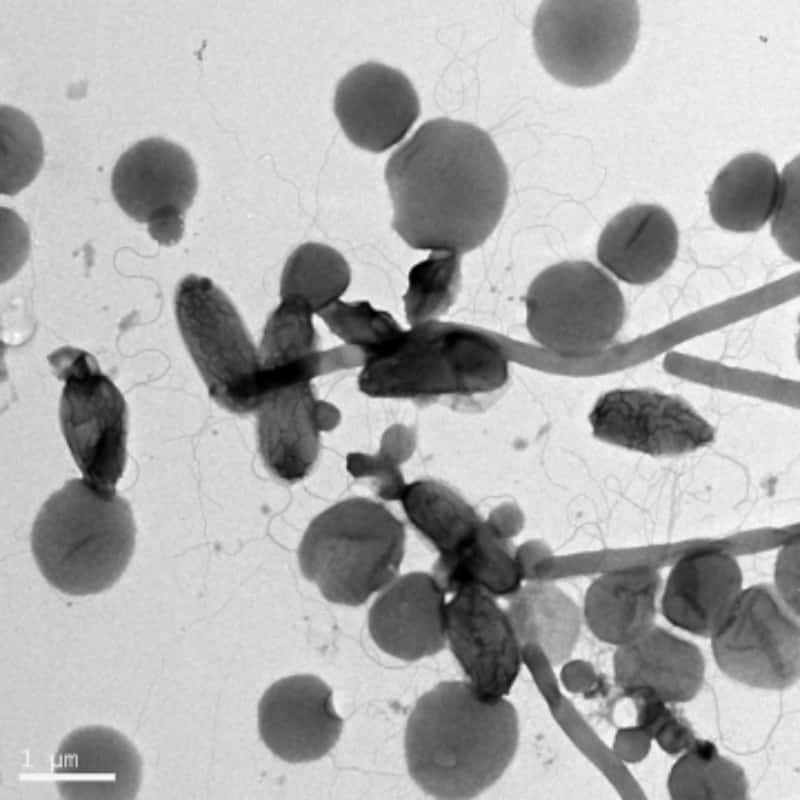 A proposed update to the International Code of Nomenclature of Prokaryotes would allow scientists to assign official names to uncultivated species of Bacteria and Archaea, such as the specimens shown in this enrichment culture of heat-loving Bacteria and Archaea from a hot spring.

“It sets the framework for a path forward to provide a structured way to communicate the vast untapped biodiversity of the microbial world within the scientific community and across the public domain” said Anna-Louise Reysenbach, Ph.D., Professor of Biology at Portland State University.  “That’s why this change is so important.”

The article and proposed plans are the culmination of a series of workshops that were funded by the National Science Foundation. The next step, says Murray, is to figure out an implementation strategy for moving forward with one of the two proposed plans, while engaging the many microbiologists who contributed to this consensus statement and others around the world who want to help see this change enacted. So far, many have been eager to participate.

“This is an exciting field to be in right now because we’re describing diversity of life on Earth and uncovering new phyla just like scientists were back in the 1800s when they were still discovering larger organisms,” Murray said. “Lots of paradigms have been changing in how we understand the way the world works, and how much diversity is out there – and this is another change that needs to be made. We’re going to need to change it or we’re going to live in chaos.”

“Lots of paradigms have been changing in how we understand the way the world works, and how much diversity is out there – and this is another change that needs to be made. We’re going to need to change it or we’re going to live in chaos.”

To view the full text of the aricle “Roadmap for naming uncultivated Archaea and Bacteria”  in Nature Microbiology, please visit: https://www.nature.com/articles/s41564-020-0733-x