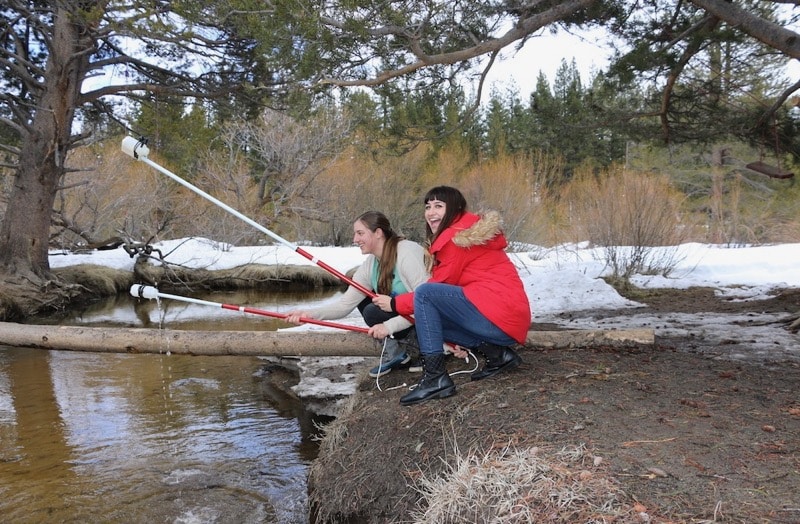 Take a moment to picture a scientist who has made a groundbreaking discovery. What does that person look like?

Perhaps it’s a person in a white coat standing in a lab with microscopes and test tubes, or a distinguished professor accepting an award on stage.

What if we told you that you could have pictured yourself?

In citizen science projects, community members like you utilize their curiosity, enthusiasm, and talents alongside professional scientists in real-world research projects. They act as the eyes, ears, or an extra set of hands for scientists, helping to extend the spatial reach of a study or adding important perspectives that scientists cannot provide themselves.

That’s precisely what Lake Tahoe locals did this summer to help DRI scientists identify microplastic pollution in the Lake for the first time ever.

DRI microplastics researchers sample water from the shore of Lake Tahoe in spring 2019.

Why citizen science?
In fall of 2018, Desert Research Institute scientists Monica Arienzo, Zoe Harrold, and Meghan Collins were formulating a project to search for microplastic pollution in the surface waters of Lake Tahoe and in stormwater runoff into the lake. But the team was not satisfied in seeking to identify the presence of microplastic alone—they also wanted to make connections with community members in Tahoe.

“By involving citizen scientists in understanding the problem of microplastics,” explained Arienzo, “we can naturally connect the community to evidence-based solutions to reduce the microplastic problem.”

To recruit citizen scientists, DRI partnered with the League to Save Lake Tahoe, which runs the Pipe Keepers program. Pipe Keepers volunteers throughout the Tahoe Basin collect water samples from stormwater outfalls into Lake Tahoe and monitor for stormwater pollution.

These outfalls, which drain water from roadways, parking lots and neighborhoods into the lake, are a significant source of fine sediment pollution in Lake Tahoe, which threatens the clarity of Tahoe’s famous blue waters. They’re also a potential culprit of microplastic pollution since plastic litter, tires, and other sources can break down into smaller pieces and be swept away with the stormwater.

“Our citizen science programs are a great way to get locals and visitors directly engaged in protecting the Lake,” said Emily Frey, the League’s Citizen Science Program Coordinator. “We’re really excited to contribute to this groundbreaking research.”

Over the course of the 2019 field season, volunteer Pipe Keepers collected 24 liters of water from six sampling sites. Arienzo, Harrold, and Collins also pumped water samples from several places along the Lake’s shoreline surface waters for the study.

In both the stormwater samples and the surface water samples, a large portion of the microplastics found were small fibers, which can come from the breakdown of synthetic clothing. The stormwater represents a point-source of this microplastic pollution, which, in theory, could be mitigated in the future. 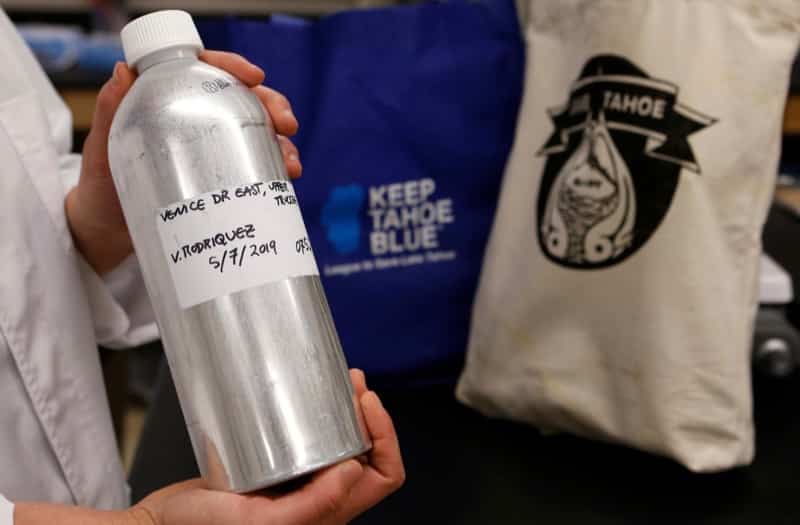 Broad benefits
Beyond providing important data for research projects, citizen science also has the power to engage communities in scientific inquiry and inspire care for the places where we live and play.

Laura Schlim has been a volunteer with the Pipe Keepers program for three years, and she worked with the DRI team to collect samples for the microplastics project. The best thing about citizen science for her? It’s fun!

“I’m naturally interested in why things work a certain way,” explained Schlim, a certified California naturalist. “It’s fun to be part of something where I can contribute to the greater body of knowledge while also enjoying the natural world.”

Vesper Rodriguez, a Pipe Keeper since 2018, echoed this sentiment.

“I volunteer because I like to be outside and I have a lot of fun with the projects. Volunteering for the League’s Stewardship Days and their Pipe Keepers program in particular, which allows volunteers to monitor stormwater infrastructure, is really fulfilling,” Rodriguez said. “It’s a rewarding feeling to contribute to the community and the land that I live on.”

Since community members have been vested in the research from the start, the DRI team is optimistic that the findings of their work will be able to go far beyond the lab and begin to solve the microplastic pollution problem in Lake Tahoe.

“A core mission of the DRI team is to generate evidence-based solutions to microplastics in our water, by identifying sources that could be mitigated or finding techniques to better prevent microplastic generation in the first place,” said Collins. “Building a community of citizen scientists creates a strong network of engaged individuals who care and can implement these solutions as they are developed.” 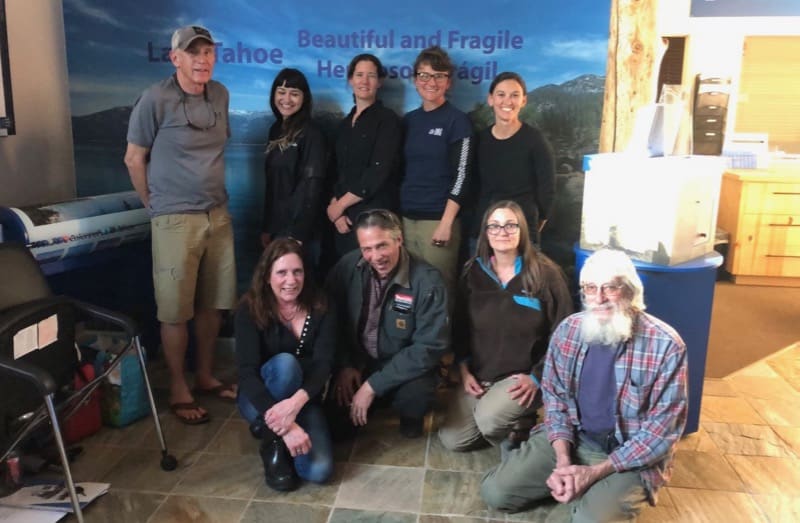 The study on microplastics is one of many active citizen science projects led by DRI and the League to Save Lake Tahoe. DRI also leads Stories in the Snow and Tahoe: Rain or Snow?, projects related to weather and climate in the Sierra Nevada. In addition to the Pipe Keepers program, the League also runs Eyes on the Lake, which helps monitor and prevent the spread of aquatic invasive plants.

Interested in joining the team of citizen scientists in the Sierra Nevada and around Lake Tahoe? Download the Citizen Science Tahoe app to get started.

In addition to volunteering your time to this project, you can also financially support this research effort at the team’s crowdfunding page.