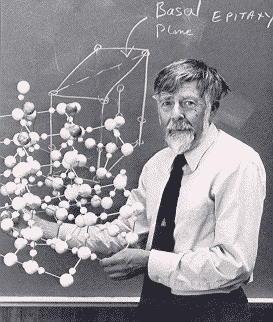 Please join us for the Celebration of Life for Dr. John Hallett on Monday, December 17th from 3pm-5pm in the DRI Stout Conference Center, located at 2215 Raggio Parkway, Reno, NV 89512.  Please RSVP to Britt Chapman by Monday, December 10th at Britt.Chapman@dri.edu or by telephone (775) 673-7480.

Reno, Nev. (November 15, 2018): Dr. John Hallett, a research professor of atmospheric physics in DRI’s Division of Atmospheric Sciences passed away on Monday, November 5, 2018 at his home in Reno.

John began his career at DRI in 1966 when his research and acquaintance with Dr. Wendell Mordy first drew him to Nevada. As its longest-serving scientist, Dr. Hallett helped start the Desert Research Institute and establish DRI as a leader in atmospheric physics research. He also played a central role in the development of the University of Nevada, Reno’s atmospheric sciences graduate program, which he directed for over a decade.

“There are lots of things that we don’t understand out there. There are still major problems out there to be investigated that have great scientific and practical applications.”Dr. John Hallett, DRI 50th Anniversary Magazine, 2009.

Following his retirement in 2011 and until a few years ago when his health no longer permitted, Dr. Hallett would visit DRI’s research campus in Reno most every day to discuss science and current events with his colleagues, and to mentor graduate students.

Dr. Hallett was the only child of Stanley and Nellie (Veale) Hallett, and was born in Bristol, England on December 2, 1929.  As a child, he survived the Bristol Blitz during World War II, sleeping in his backyard bunker and scavenging for metal after the air raids to help in the war effort.  Always an astute student he dedicated himself to academics and began working as a lab tech at age 14.  Precise and technical in his approach, he built the first TV in his neighborhood from a kit.  Ironically, he never owned a TV as an adult. Inspired by a terrifying ice storm, he chose to study atmospheric physics in college. He earned his bachelor’s degree in physics from the University of Bristol, then a Ph.D. in meteorology at Imperial College, at the University of London. His research interests included cloud physics, cloud electrification, atmospheric chemistry, climate dynamics and physical meteorology.

At Imperial College he met and married Dr. Joan Terry (Collar) Hallett and together they pursued a life of science, exploration, and inquiry. Dr. John Hallett collaborated with numerous researchers throughout the United States and internationally and together Drs. Hallett traveled to many countries including Argentina, Japan, South Korea, France, Iceland, New Zealand, and Australia. They were first drawn to the U.S. in 1960 when they acquired teaching positions at the University of California, Los Angeles.

In 1966, Dr. Hallett was recruited to help start the Desert Research Institute (DRI), in Reno, Nevada. With their three daughters, they moved permanently to America where they had a fourth daughter. In addition to being a research scientist at DRI and the director of the DRI ice physics laboratory, Dr. Hallett also taught Physics at the University of Nevada, Reno.

DRI was the perfect environment where Dr. Hallett could do research on how ice forms in clouds and how ice behaves in the atmosphere. He actively worked with NASA, the National Science Foundation, the Department of Defense, and other agencies to help understand the earth’s atmosphere. Upon his retirement in 2011, Dr. John Hallett was the longest standing DRI scientist at 45 years.

Although he was a brilliant scientist, he may be best remembered for his mentoring of the younger generation of scientists. He challenged his students and peers. During his time at DRI, Dr. Hallett earned the Edgar J. Marston chair of Atmospheric Sciences, authored over 140 scientific articles and received numerous national and international awards including the DRI Dandini Medal of Science award, the Nevada Regents Researcher of the Year award, a lifetime achievement award from the American Institute for Aeronautics and Astronautics and he was elected to be a Fellow of the American Meteorological Society for his many years of outstanding contributions to atmospheric sciences.

In 1980, Dr. Hallett was deeply moved by the loss of his friends and colleagues when a B26 aircraft contracted by DRI crashed on an atmospheric research mission southwest of Lake Tahoe. After the crash, he dedicated his research to improving airplane safety in adverse atmospheric conditions and invented new instruments for measuring them.

He was an avid conservationist, outdoorsman, photographer, and critical observer of the natural world; all passions that he passed down to his daughters and grandchildren. Dr. Hallett was preceded in death by his wife, Joan Terry Hallett.  He will be thoughtfully remembered by his daughters, Jennifer (Chris), Joyce, Elaine, and Rosemary (Rafi), and grandchildren, Morgan, Gillian, Ceilidh, Colin, Alexander, Miles, Cora, Graham, Alison, and Liam.