Groundwater evapotranspiration (ETg) from phreatophyte vegetation is the primary component of natural groundwater discharge within the Humboldt River Basin. This report summarizes previous study estimates of ETg, and details methods and results of updated groundwater discharge areas, ETg rates, and ETg volume estimates developed in this study. Estimates derived in this study are summarized for the period of 1985-2015 and were based on a consistent place-based approach that relies on Geographic Information System and groundwater level data and a least-squares regression model that relates Landsat vegetation indices with evaporative demand, precipitation, and in-situ estimates of phreatophyte ET. Median annual ETg rates and volumes reported in this study are representative of pre-development conditions. Where irrigated areas were identified, ETg rates were adjusted to reflect the phreatophyte vegetation that likely occupied irrigated areas prior to cultivation. Results from this study were used to inform groundwater modeling studies by the U.S. Geological Survey and the Desert Research Institute, in cooperation with Nevada Division of Water Resources, to support conjunctive water management.

Results and datasets are summarized and documented in the form of maps, graphs, tables, geodatabases, and metadata following Federal Geographic Data Committee standards and are available at www.dri.edu/humboldt-etg. Estimated pre-development total annual ETg volumes for the upper, middle, and lower Humboldt River basin are 158,500, 361,600, 55,900 ac-ft/yr, and 85,700, 248,400, and 46,100 ac-ft/yr when riparian lands are excluded, respectively. Discharge areas and median annual ETg rates and volumes were compared to previous estimates for respective ET Units and Hydrographic Areas. Results reported for the upper Humboldt River Basin indicate that potential areas of groundwater discharge are generally lower, and ETg rates and volumes are generally less than one half of the ETg rates and volumes reported by Plume and Smith (2013). Results reported for the middle Humboldt River Basin indicate that ETg volumes are higher in six, and lower in seven HAs when compared to previous estimates reported in Water Resource Bulletin and Reconnaissance Series reports. ETg rates and volumes in the middle Humboldt River Basin are also generally less than one half when compared to those reported by Berger (2000). Differences in ETg volumes are primarily due to differences in ETg rates and differences in groundwater discharge areas.

This study used place-based satellite remote sensing, climate and GIS datasets, groundwater levels, and in-situ based phreatophyte ET empirical regression models to estimate potential areas of groundwater discharge, and ETg rates and volumes within the Humboldt River Basin. Future study estimates of ETg within the Humboldt River Basin could be improved by refining delineation of groundwater discharge areas, variability in ETg with respect to climate and land use change, and collection of in-situ ET estimates in areas where large uncertainty exists.

Groundwater supports a variety of ecosystems in Nevada and the Great Basin, including springs, rivers, lakes, meadows, and wetlands, as well as trees and shrubs that tap into groundwater through deep roots (called phreatophytes). Many of these groundwater dependent ecosystems (GDEs) have small footprints on the landscape, but outsize ecological, economical, and cultural importance —  they provide water storage and purification, store carbon, provide recreational and economic benefits, many of them are considered sacred to indigenous peoples, and they provide habitats to a wealth of species, including many rare and endemics species that are found only in this region. As water demands for agriculture, mining, energy development, and potable water uses continue to increase, understanding the potential impacts of groundwater withdrawals on these ecosystems can assist efforts to sustainably manage limited water resources to meet economic and livelihood, wildlife habitat, recreation and other needs. Furthermore, understanding the influence of variability in climatic conditions on groundwater dependent vegetation will enhance our ability to better tease apart effects of climate from those associated with water management.

The DRI studies highlighted below seek to enhance this understanding by assessing historical patterns of vegetation variability and trends in relation to climate and management using 35+ years of Landsat satellite imagery, climate data, groundwater levels, unmanned aircraft systems (UAS), and field surveys for selected areas across the Great Basin. Reports and all data compiled for each of these studies are available below for download. 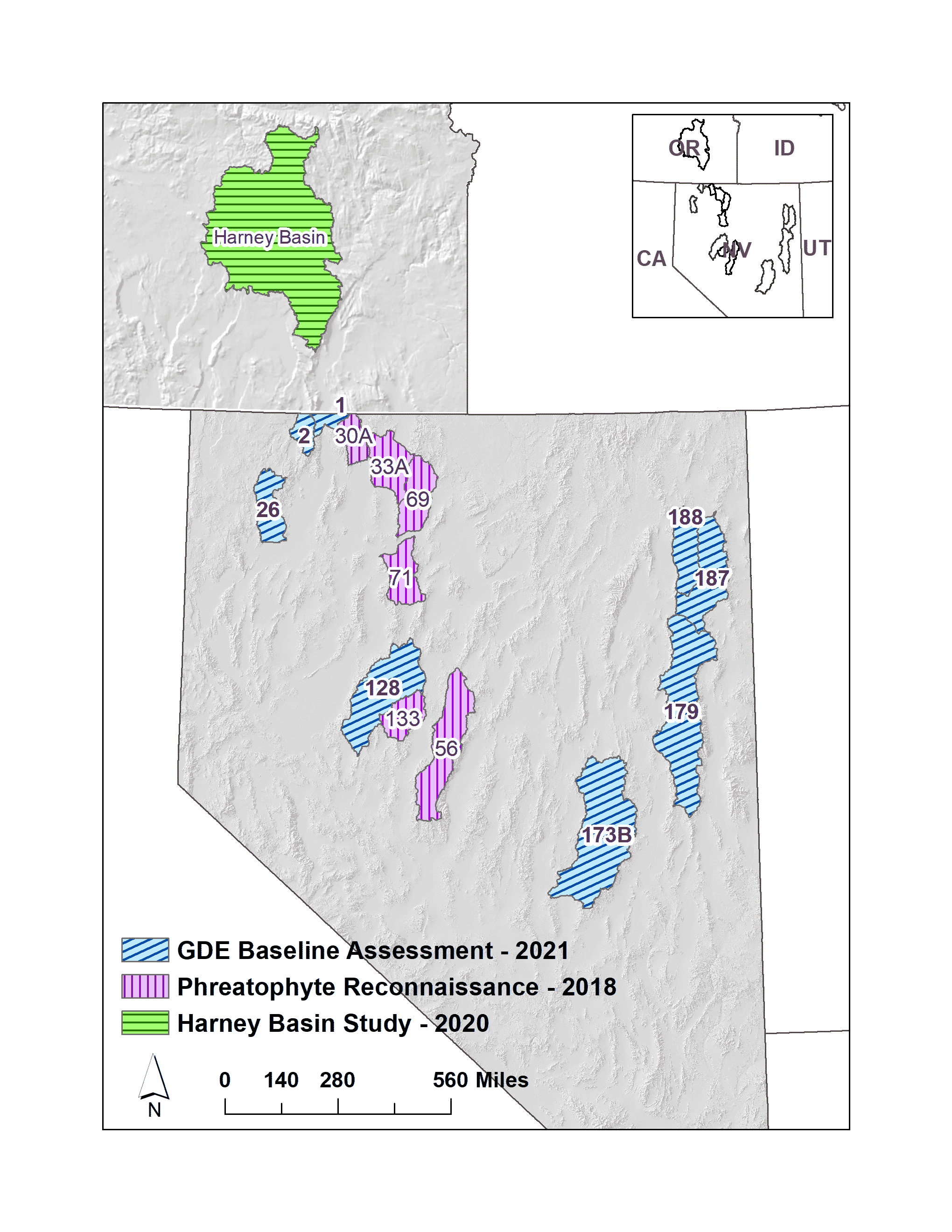 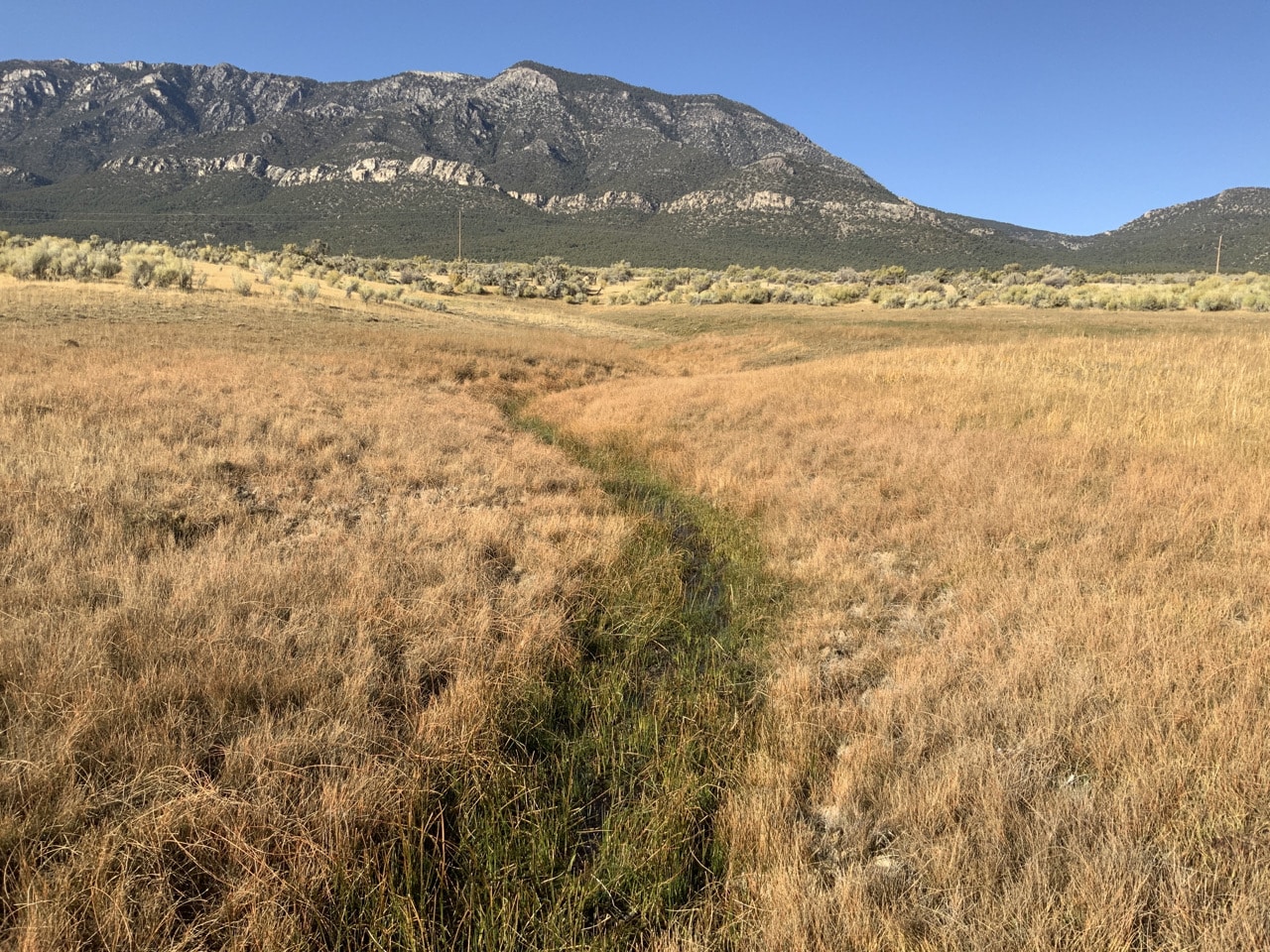 Objective:  To establish a baseline for monitoring and assessing the potential impacts of groundwater developments on GDEs in selected hydrographic basins of Nevada by quantifying the current status and historical trends in the condition of groundwater dependent vegetation relative to trends in both climate and groundwater levels. Analyses were completed for Pueblo, Continental Lake, Mud Meadow, Dixie, Railroad-North, Steptoe, Goshute, and Independence Valleys in Nevada.

Status and Trends of Groundwater Dependent Vegetation in Relation to Climate and Shallow Groundwater in the Harney Basin, Oregon

Objective:  To increase understanding of relations between variations in climate, shallow groundwater, and groundwater dependent vegetation in the Harney Basin, OR.

Objective:  Identify patterns of phreatophyte vegetation vigor change through space and time and qualitatively assess relations between these changes and variability in precipitation, evaporative demand, and depth to groundwater for selected hydrographic basins where significant declines in groundwater are known to have occurred due to pumping for irrigation. Analyses were completed for Kings River, Quinn River (Orovada subarea), Upper Reese River, Paradise, Grass, and Edwards Creek Valleys in Nevada.

Accurate historical evapotranspiration (ET) information for agricultural areas in the western U.S. is needed to support crop and pumpage inventories, water right applications, water budgets, and development of water management plans. Annual and monthly ET from irrigated agriculture is largely a function of water availability, atmospheric water demand, crop type, crop conditions, and land use. Landsat thermal and optical satellite imagery is ideal for monitoring the spatial and temporal variability of crops given its spatial and temporal resolution, making it ideal for monitoring crop ET.

The objective of this study is to estimate and summarize monthly, seasonal, and annual ET from agricultural areas in northwestern Nevada and northeastern California from 2001 through 2011 using Landsat satellite imagery. ET estimates from 57 Hydrographic Areas (HAs) are summarized in multiple ways including a geodatabase, maps, figures, and tables. Monthly and annual ET estimates for select HAs are discussed with respect to variations in climate, water supply, and land use changes, through visualizations and summaries of spatial and temporal ET distributions. Landsat based ET was estimated using a land surface energy balance model, Mapping EvapoTranspiration at high Resolution with Internalized Calibration (METRIC), using Landsat 5 and Landsat 7 imagery combined with reference ET.

Results highlight that a range of geographic, climatic, hydrographic, and anthropogenic factors influence ET. For example, irrigators in Mason Valley have the ability to mitigate deficiencies in surface water by pumping supplemental groundwater, resulting in low annual ET variability. Conversely, irrigators in Lovelock are subject to limited upstream surface water storage and are not able to irrigate with groundwater due to high salinity. These factors result in high annual ET variability due to drought. ET estimates derived from METRIC for well-watered fields generally compare well to previous estimates derived from traditional reference ET – crop coefficient methods. Although there are limitations and uncertainties with the METRIC model, METRIC ET estimates are within 10 to 20 percent of ET reported from micrometeorological studies in Nevada for commonly grown crops of alfalfa and pasture grass. Landsat derived ET estimates reported in this study have many immediate applications relevant to water managers, researchers, and practitioners.

A report is available for download here: Remote Sensing Estimates of Evapotranspiration from Irrigated Agriculture, Northwestern Nevada and Northeastern California 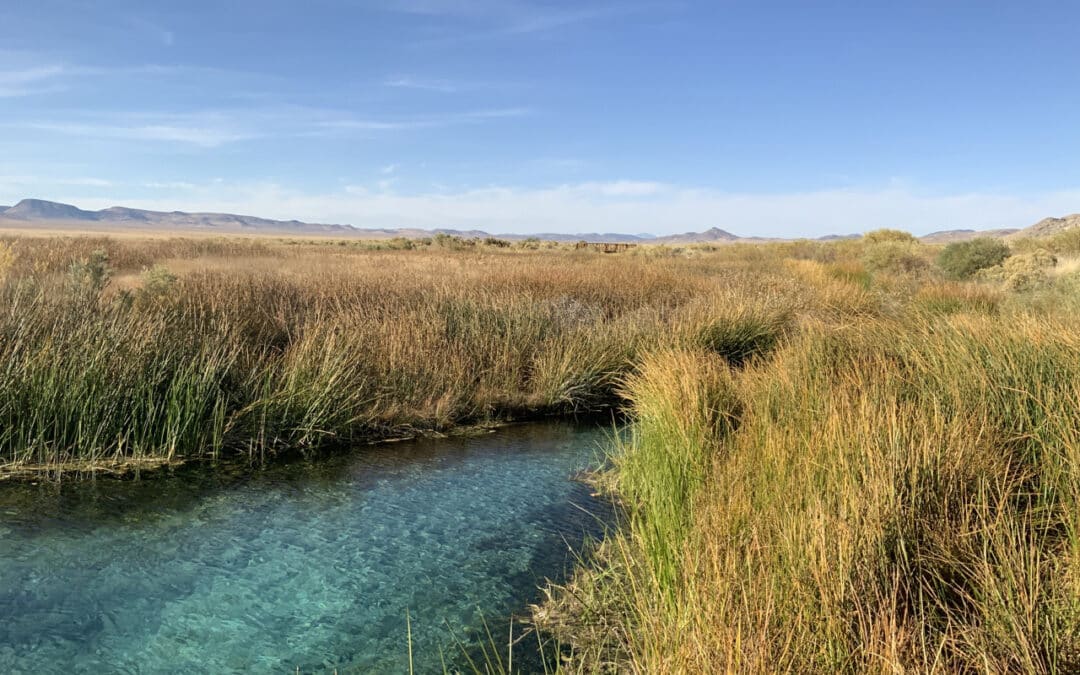 Drought Sensitivity and Trends of Riparian Vegetation in Nevada

Drought Sensitivity and Trends of Riparian Vegetation in Nevada

Maintaining the ecological integrity of riparian areas and other groundwater-dependent ecosystems (GDEs) is an important objective for natural resource and water managers, given the role of these systems in sustaining biodiversity and the other ecosystem services they provide. Long-term monitoring data are required to understand status and trends in these systems, which are often confounded by the influences of interannual climate variability. Yet, these data are expensive to collect and maintain and have historically not been widely available. Recent advances in cloud computing can now help to address these challenges, by allowing efficient and cost-effective processing and analysis of multiple decades’ worth of satellite remote sensing and climate datasets over large geographic extents.

In this study we analyzed climate-adjusted trends in riparian vegetation across the state of Nevada from 1985 to 2018 based on the 30 meter resolutionMap of Riparian Vegetation in Nevada. To accomplish this, we established relations between the Standardized Precipitation-Evapotranspiration Index (SPEI; a drought index representing the difference between precipitation and potential evapotranspiration for a select time period) and Landsat-derived normalized difference vegetation index (NDVI, an indicator of vegetation vigor) using linear regression. We then used this relationship to adjust for the influence of drought on NDVI and assessed the NDVI trend over time using a non-parametric Mann-Kendall trend test.

Our results highlight areas where changes in riparian vegetation have occurred that are likely due to natural disturbances or human impacts, as opposed to drought or interannual climate variability. This information helps to clarify and quantify the effects of management actions and can be used to target locations for field investigation or alternative management. We have coupled this work with targeted analyses of groundwater well trends and drone-based field assessments in high priority GDEs to interpret our results and identify potential causal factors of change.

The dataset is available for viewing here: https://dri-apps.earthengine.app/view/nv-riparian-trends

The 30-meter resolution (1 GB) dataset is available upon request.