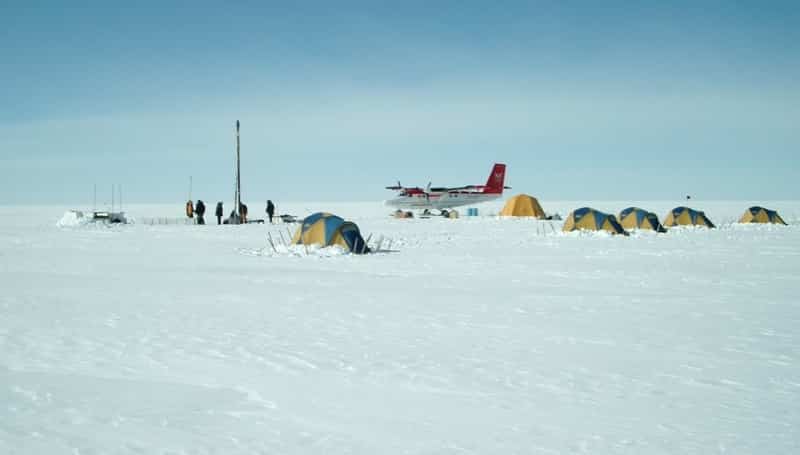 Researchers use a drill to extract one of the Greenland ice core samples that became the basis for this research. Credit: Joe McConnell/DRI.

RENO, Nev. (May 7, 2019) – This week, new research outlining the steady decline of phytoplankton productivity in the North Atlantic since the Industrial Revolution was published in the journal Nature. The study, titled “Industrial-era decline in subarctic Atlantic productivity,” is underpinned by data provided by Joe McConnell, Ph.D., director of DRI’s Ultra-Trace Chemistry Laboratory in Reno, Nev.

The recently published study uses measurements from twelve Greenland ice cores to trace the amount of methanesulfonic acid (MSA)—a byproduct of the emissions from large phytoplankton blooms—in the atmosphere. Since the mid-19th century, the concentration of MSA in ice core records has declined by about 10 percent, which translates to a 10 percent loss of phytoplankton. This loss coincides with steadily rising ocean surface temperatures over the same time period, which suggests that populations may decline further as temperatures continue to rise.

A full press release about these findings, originally published by MIT News, is available below.

Phytoplankton decline coincides with warming temperatures over the last 150 years.

Virtually all marine life depends on the productivity of phytoplankton — microscopic organisms that work tirelessly at the ocean’s surface to absorb the carbon dioxide that gets dissolved into the upper ocean from the atmosphere.

Through photosynthesis, these microbes break down carbon dioxide into oxygen, some of which ultimately gets released back to the atmosphere, and organic carbon, which they store until they themselves are consumed. This plankton-derived carbon fuels the rest of the marine food web, from the tiniest shrimp to giant sea turtles and humpback whales.

Now, scientists at MIT, Woods Hole Oceanographic Institution (WHOI), and elsewhere have found evidence that phytoplankton’s productivity is declining steadily in the North Atlantic, one of the world’s most productive marine basins.

In a paper appearing today in Nature, the researchers report that phytoplankton’s productivity in this important region has gone down around 10 percent since the mid-19th century and the start of the Industrial era. This decline coincides with steadily rising surface temperatures over the same period of time.

Matthew Osman, the paper’s lead author and a graduate student in MIT’s Department of Earth, Atmospheric, and Planetary Sciences and the MIT/WHOI Joint Program in Oceanography, says there are indications that phytoplankton’s productivity may decline further as temperatures continue to rise as a result of human-induced climate change.

“It’s a significant enough decine that we should be concerned,” Osman says. “The amount of productivity in the oceans roughly scales with how much phytoplankton you have. So this translates to 10 percent of the marine food base in this region that’s been lost over the industrial era. If we have a growing population but a decreasing food base, at some point we’re likely going to feel the effects of that decline.”

Drilling through “pancakes” of ice

Osman and his colleagues looked for trends in phytoplankton’s productivity using the molecular compound methanesulfonic acid, or MSA. When phytoplankton expand into large blooms, certain microbes emit dimethylsulfide, or DMS, an aerosol that is lofted into the atmosphere and eventually breaks down as either sulfate aerosol, or MSA, which is then deposited on sea or land surfaces by winds.

“Unlike sulfate, which can have many sources in the atmosphere, it was recognized about 30 years ago that MSA had a very unique aspect to it, which is that it’s only derived from DMS, which in turn is only derived from these phytoplankton blooms,” Osman says. “So any MSA you measure, you can be confident has only one unique source — phytoplankton.”

In the North Atlantic, phytoplankton likely produced MSA that was deposited to the north, including across Greenland. The researchers measured MSA in Greenland ice cores — in this case using 100- to 200-meter-long columns of snow and ice that represent layers of past snowfall events preserved over hundreds of years.

“They’re basically sedimentary layers of ice that have been stacked on top of each other over centuries, like pancakes,” Osman says.

The team analyzed 12 ice cores in all, each collected from a different location on the Greenland ice sheet by various groups from the 1980s to the present. Osman and his advisor Sarah Das, an associate scientist at WHOI and co-author on the paper, collected one of the cores during an expedition in April 2015.

“The conditions can be really harsh,” Osman says. “It’s minus 30 degrees Celsius, windy, and there are often whiteout conditions in a snowstorm, where it’s difficult to differentiate the sky from the ice sheet itself.”

The team was nevertheless able to extract, meter by meter, a 100-meter-long core, using a giant drill that was delivered to the team’s location via a small ski-equipped airplane. They immediately archived each ice core segment in a heavily insulated cold storage box, then flew the boxes on “cold deck flights” — aircraft with ambient conditions of around minus 20 degrees Celsius. Once the planes touched down, freezer trucks transported the ice cores to the scientists’ ice core laboratories.

“The whole process of how one safely transports a 100-meter section of ice from Greenland, kept at minus-20-degree conditions,  back to the United States is a massive undertaking,” Osman says.

The team incorporated the expertise of researchers at various labs around the world in analyzing each of the 12 ice cores for MSA. Across all 12 records, they observed a conspicuous decline in MSA concentrations, beginning in the mid-19th century, around the start of the Industrial era when the widescale production of greenhouse gases began. This decline in MSA is directly related to a decline in phytoplankton productivity in the North Atlantic.

“This is the first time we’ve collectively used these ice core MSA records from all across Greenland,  and they show this coherent signal. We see a long-term decline that originates around the same time as when we started perturbing the climate system with industrial-scale greenhouse-gas emissions,” Osman says. “The North Atlantic is such a productive area, and there’s a huge multinational fisheries economy related to this productivity. Any changes at the base of this food chain will have cascading effects that we’ll ultimately feel at our dinner tables.”

The multicentury decline in phytoplankton productivity appears to coincide not only with concurrent long-term warming temperatures; it also shows synchronous variations on decadal time-scales with the large-scale ocean circulation pattern known as the Atlantic Meridional Overturning Circulation, or AMOC. This circulation pattern typically acts to mix layers of the deep ocean with the surface, allowing the exchange of much-needed nutrients on which phytoplankton feed.

In recent years, scientists have found evidence that AMOC is weakening, a process that is still not well-understood but may be due in part to warming temperatures increasing the melting of Greenland’s ice. This ice melt has added an influx of less-dense freshwater to the North Atlantic, which acts to stratify, or separate its layers, much like oil and water, preventing nutrients in the deep from upwelling to the surface. This warming-induced weakening of the ocean circulation could be what is driving phytoplankton’s decline. As the atmosphere warms the upper ocean in general, this could also further the ocean’s stratification, worsening phytoplankton’s productivity.

“It’s a one-two punch,” Osman says. “It’s not good news, but the upshot to this is that we can no longer claim ignorance. We have evidence that this is happening, and that’s the first step you inherently have to take toward fixing the problem, however we do that.”

This research was supported in part by the National Science Foundation (NSF), the National Aeronautics and Space Administration (NASA), as well as graduate fellowship support from the US Department of Defense Office of Naval Research.

Reprinted with permission of MIT News.