Above:  A dry Nevada landscape. New research led by DRI scientists shows that atmospheric thirst is a persistent force in pushing Western landscapes and water supplies toward drought.

New study shows robust increases in atmospheric thirst across much of U.S. during past 40 years 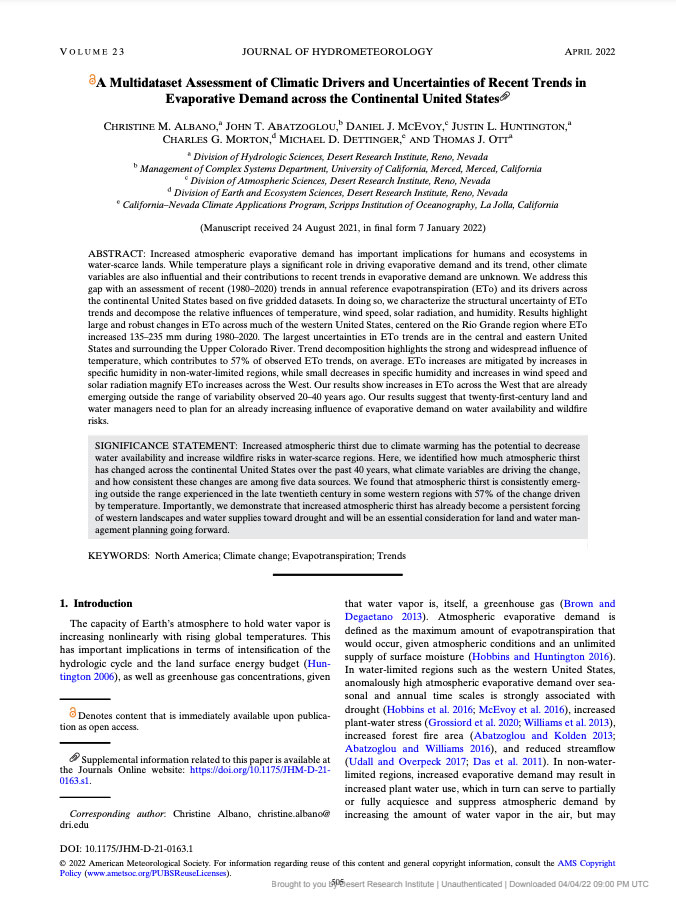 The full text of the study, A multi-dataset assessment of climatic drivers and uncertainties of recent trends in evaporative demand across the continental U.S., is freely available from the Journal of Hydrometeorology: https://journals.ametsoc.org/view/journals/hydr/23/4/JHM-D-21-0163.1.xml.

Reno, Nev. (April 6, 2022) –In arid Western states, the climate is growing warmer and drier, leading to increased demand for water resources from humans and ecosystems. Now, the atmosphere across much of the U.S. is also demanding a greater share of water than it used to, according to a new study by a team from DRI, University of California, Merced, and Scripps Institution of Oceanography at UC San Diego.

The study was published in the Journal of Hydrometeorology and assessed trends in evaporative demand across the U.S. during a 40-year period from 1980-2020 using five datasets. Evaporative demand, sometimes described as “atmospheric thirst,” is a measure of the potential loss of water from the earth’s surface to the atmosphere based on variables including temperature, humidity, wind speed, and solar radiation.

The team’s findings showed substantial increases in atmospheric thirst across much of the Western U.S. during the past 40 years, with the largest and most robust increases in an area centered around the Rio Grande and Lower Colorado rivers. These regions have experienced changes on the order of two-to-three standard deviations from what was seen during the baseline period of 1980-2000.

“This means that atmospheric thirst conditions in parts of the country are now verging outside of the range that was experienced 20 to 40 years ago, especially in some regions of the Southwest,” said lead author Christine Albano, Ph.D., of DRI. “This is really important to understand, because we know that atmospheric thirst is a persistent force in pushing Western landscapes and water supplies toward drought.”

Figure showing changes in atmospheric thirst, measured in terms of reference evapotranspiration (mm), from 1980-2020. The largest changes are centered over the Rio Grande region of the southwestern U.S.
Credit: DRI.
To learn more about the role that different climate variables play in determining atmospheric thirst, Albano and her colleagues analyzed the relative influences of temperature, wind speed, solar radiation, and humidity. They found that, on average, increases in temperature were responsible for 57 percent of the changes observed in all regions, with humidity (26 percent), wind speed (10 percent), and solar radiation (8 percent) playing lesser roles.

“This study shows the dominant role that warming has played on the increasing evaporative demand and foreshadows the increased water stressors the West faces with continued warming,” said study co-author John Abatzoglou, Ph.D., of University of California, Merced.

For farmers and other water users, increases in atmospheric thirst mean that in the future, more water will be required to meet existing water needs. Some of these changes observed in this study are centered over areas where warming temperatures and lower-than-average precipitation are already creating stress on water supplies.

For example, in the Rio Grande region, the study authors calculated that atmospheric thirst increased by 8 to 15 percent between 1980 and 2020. Holding all else equal and assuming no other changes in management, this means that 8 to 15 percent more water is now required to maintain the same thoroughly-watered crop.

“Our results indicate that, decade by decade, for every drop of precipitation that falls, less and less water is likely to drain into streams, wetlands, aquifers, or other water bodies,” said study co-author Michael Dettinger, Ph.D., of Scripps Institution of Oceanography and DRI. “Resource managers, policy makers, and the public need to be aware of these changes and plan for these impacts now and into the future.”

Members of the team are now developing seasonal to sub-seasonal forecasts of evaporative demand.

“We anticipate these types of forecasts will be important for drought and fire forecasting applications,” said study co-author Dan McEvoy, Ph.D., of DRI.

The full text of the study, A multi-dataset assessment of climatic drivers and uncertainties of recent trends in evaporative demand across the continental U.S., is freely available from the Journal of Hydrometeorology: https://journals.ametsoc.org/view/journals/hydr/23/4/JHM-D-21-0163.1.xml

UC Merced opened in 2005 as the newest member of the University of California system and is the youngest university to earn a Carnegie research classification. The fastest-growing public university in the nation, UC Merced is on the cutting edge of sustainability in campus construction and design and supports high-achieving and dedicated students from the underserved San Joaquin Valley and throughout California. The Merced 2020 Project, a $1.3 billion public-private partnership that is unprecedented in higher education, nearly doubled the physical capacity of the campus with 11 buildings earning Platinum LEED certification.

Scripps Institution of Oceanography at the University of California San Diego is one of the world’s most important centers for global earth science research and education. In its second century of discovery, Scripps scientists work to understand and protect the planet, and investigate our oceans, Earth, and atmosphere to find solutions to our greatest environmental challenges. Scripps offers unparalleled education and training for the next generation of scientific and environmental leaders through its undergraduate, master’s and doctoral programs. The institution also operates a fleet of four oceanographic research vessels, and is home to Birch Aquarium at Scripps, the public exploration center that welcomes 500,000 visitors each year.

At the University of California San Diego, we embrace a culture of exploration and experimentation. Established in 1960, UC San Diego has been shaped by exceptional scholars who aren’t afraid to look deeper, challenge expectations and redefine conventional wisdom. As one of the top 15 research universities in the world, we are driving innovation and change to advance society, propel economic growth and make our world a better place. Learn more at ucsd.edu.