Genetics
Genetics Screening
Actionable Care Plans
Above: Graphic representation of the DNA sequence. In a recent study, Healthy Nevada Project scientists looked at the impact that notifying a patient of a positive finding for a CDC Tier 1 condition had on the care that the patient received in the months and years that followed.
Credit: Gio_tto, “Graphic representation of the DNA sequence”, https://www.istockphoto.com/photo/dna-sequence-gm498188318-79526609.
Study Shows Importance of Ensuring Participant and Provider Follow-up After a Genetic Screening Result
New research from the Healthy Nevada Project® finds that a confirmed diagnosis does not always result in changes to patient care 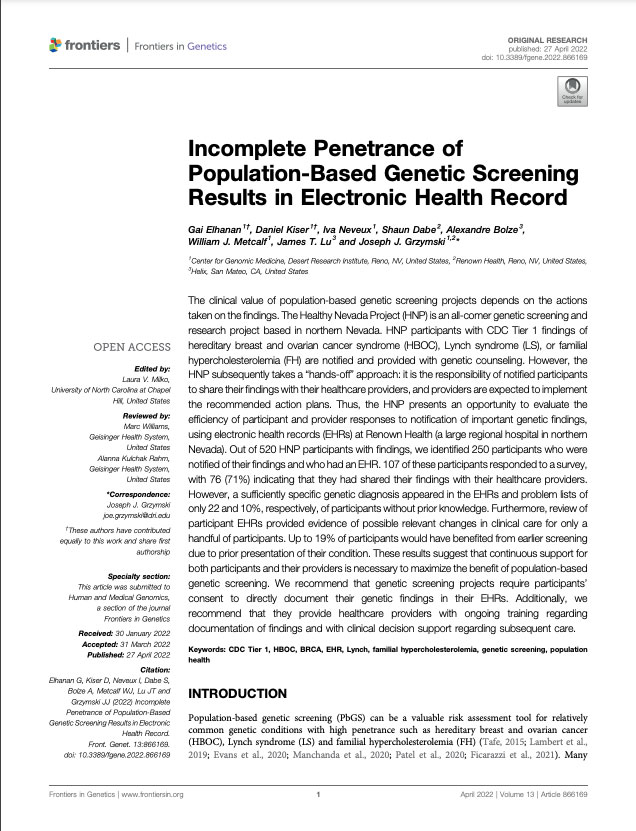 The full text of the study,  Incomplete Penetrance of Population-Based Genetic Screening Results in Electronic Health Record, is available from Frontiers in Genetics: https://www.frontiersin.org/articles/10.3389/fgene.2022.866169/full?&utm_source=Email_to_authors_&utm_medium=Email&utm_content=T1_11.5e1_author&utm_campaign=Email_publication&field=&journalName=Frontiers_in_Genetics&id=866169.

Reno, Nev. (April 27, 2022) – Presenting individuals with potentially life-altering health information doesn’t mean the individuals – or their healthcare providers – will act on it. Follow-up education and conversations about actionable care plans with patients and their doctors are key next steps, according to new research from the Healthy Nevada Project.

The Healthy Nevada Project is a genetic screening and research project that launched in 2016 as a partnership between DRI and Renown Health. The project now has more than 50,000 participants, with genetic sequencing provided by Helix.

Between September 2018 and September 2020, the Healthy Nevada Project successfully notified 293 participants that they were genetically at risk for hereditary breast and ovarian cancer syndrome, Lynch syndrome, or familial hypercholesterolemia – three common genetic conditions known collectively as the Centers for Disease Control and Prevention (CDC) Tier 1 conditions. In a study published today in Frontiers in Genetics, Healthy Nevada Project scientists looked at the impact that notifying a patient of a positive finding for a CDC Tier 1 condition had on the care that the patient received in the months and years that followed.

According to their results, among the 293 Healthy Nevada Project participants who were notified of their genetic risk of a CDC Tier 1 condition, 71 percent of participants with electronic health records shared their findings with healthcare providers. However, only 30 percent of the electronic health records for these patients contained documentation of the genetic diagnosis, and only 10 percent of examined patients experienced a possible change in care after receiving the results of their genetic screening.

“The Healthy Nevada Project was implemented with a ‘hands-off’ approach where the participants receive their findings and decide with whom and when to share those findings. The findings were not automatically added to their electronic health records,” said Dr. Gai Elhanan, health data scientist at DRI and co-lead author of the study. “What we’re learning now is that to ensure that important genetic findings are integrated into the care journey it is important to make their inclusion into the electronic health records part of the study.”

This study builds on previous Healthy Nevada Project research published in Nature Medicine demonstrating the importance of screening for CDC Tier 1 conditions, which affect about one in 75 individuals and can be mitigated or even prevented from developing into disease when detected early. This study found that as many as 90 percent of the CDC Tier 1 cases are missed by clinical providers during normal clinical care screenings and examinations.

During the current study, the Healthy Nevada Project scientists found that 19 percent of studied participants had already developed one of the CDC Tier 1 conditions, and thus would have potentially benefited from earlier notification about their condition. The study team hopes that their findings will encourage individuals in Nevada to obtain genetic testing for these relatively common conditions. Even if individuals are older or have already suffered from diseases related to these conditions, testing could also prove beneficial to siblings, children, and grandchildren who may also be at risk and who could subsequently be screened in the event of a positive finding.

The study team also encourages informing health care providers of the importance of incorporating genetic diagnoses into the pharmaceutical (for example, for Familial Hypercholesterolemia) and treatment advice given to patients.

“As a result of this analysis, the clinicians at Renown Health and the Healthy Nevada Project researchers have made significant changes, including obtaining informed consent from participants to report positive findings from their genetics reports directly into their electronic medical record,” said Daniel Kiser, M.S., assistant research scientist of data science at DRI and co-lead author of the study. “This will help both participants, their clinical providers, and the whole state maximize the long-term benefits of the Healthy Nevada Project voluntary population-based genetic screening.”

The full text of the study,  Incomplete Penetrance of Population-Based Genetic Screening Results in Electronic Health Record, is available from Frontiers in Genetics: https://www.frontiersin.org/articles/10.3389/fgene.2022.866169/full?&utm_source=Email_to_authors_&utm_medium=Email&utm_content=T1_11.5e1_author&utm_campaign=Email_publication&field=&journalName=Frontiers_in_Genetics&id=866169.

For more information on the Healthy Nevada Project® or to request genetic screening, please visit: https://healthynv.org/