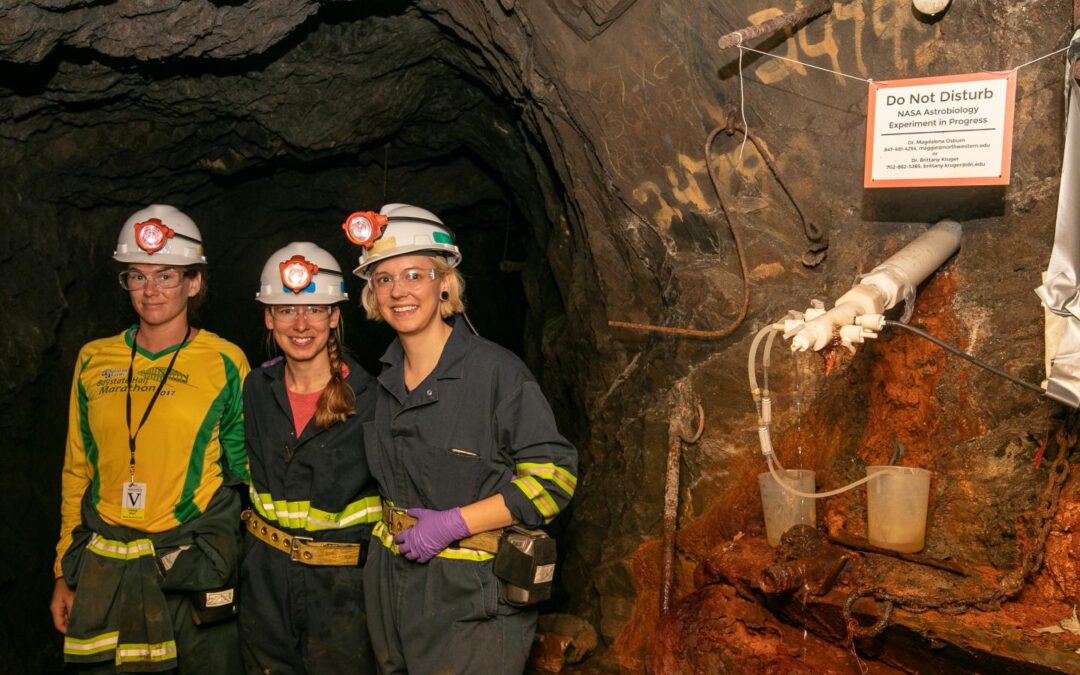 Las Vegas, Nev. – Below the Earth’s surface, a zone of life known as the continental deep subsurface is home to large populations of bacteria and archaea, but little is known about how these microbial populations are distributed. To learn whether they are spread evenly across rock surfaces or prefer to colonize specific minerals in the rocks, scientists from Northwestern University and the Desert Research Institute (DRI) went deep inside of a former gold mine in South Dakota and grew biofilms (collections of microorganisms) on rocks. Their results, which published in April in the journal Frontiers in Microbiology, show that the microbes formed “hotspots” around certain minerals in the rocks. Brittany Kruger, Ph.D., Assistant Research Scientist in Biogeochemistry from DRI in Las Vegas, served as field lead for the Northwestern research team at the Sanford Underground Research Facility (SURF), where this study was conducted.

The full text of the paper Rock-Hosted Subsurface Biofilms: Mineral Selectivity Drives Hotspots for Intraterrestrial Life is available from Frontiers in the Environment: https://www.frontiersin.org/articles/10.3389/fmicb.2021.658988/full

The press release below was reposted with permission from Northwestern University in Evanston, IL:

April 9, 2021 – Below the verdant surface and organic rich soil, life extends kilometers into Earth’s deep rocky crust. The continental deep subsurface is likely one of the largest reservoirs of bacteria and archaea on Earth, many forming biofilms – like a microbial coating of the rock surface. This microbial population survives without light or oxygen and with minimal organic carbon sources, and can get energy by eating or respiring minerals. Distributed throughout the deep subsurface, these biofilms could represent 20-80% of the total bacterial and archaeal biomass in the continental subsurface according to the most recent estimate. But are these microbial populations spread evenly on rock surfaces, or do they prefer to colonize specific minerals in the rocks?

To answer this question, researchers from Northwestern University in Evanston, Illinois, led a study to analyze the growth and distribution of microbial communities in deep continental subsurface settings. This work shows that the host rock mineral composition drives biofilm distribution, producing “hotspots” of microbial life. The study was published in Frontiers in Microbiology.

To realize this study, the researchers went 1.5 kilometers below the surface in the Deep Mine Microbial Observatory (DeMMO), housed within a former gold mine now known as the Sanford Underground Research Facility (SURF), located in Lead, South Dakota. There, below-ground, the researchers cultivated biofilms on native rocks rich in iron and sulfur-bearing minerals. After six months, the researchers analyzed the microbial composition and physical characteristics of newly grown biofilms, as well as its distributions using microscopy, spectroscopy and spatial modeling approaches.

The spatial analyses conducted by the researchers revealed hotspots where the biofilm was denser. These hotspots correlate with iron-rich mineral grains in the rocks, highlighting some mineral preferences for biofilm colonization. “Our results demonstrate the strong spatial dependence of biofilm colonization on minerals in rock surfaces. We think that this spatial dependence is due to microbes getting their energy from the minerals they colonize,” explains Caitlin Casar, first author of the study.

Altogether, these results demonstrate that host rock mineralogy is a key driver of biofilm distribution, which could help improve estimates of the microbial distribution of the Earth’s deep continental subsurface. But leading intraterrestrial studies could also inform other topics. “Our findings could inform the contribution of biofilms to global nutrient cycles, and also have astrobiological implications as these findings provide insight into biomass distributions in a Mars analog system” says Caitlin Casar.

Indeed, extraterrestrial life could exist in similar subsurface environments where the microorganisms are protected from both radiation and extreme temperatures. Mars, for example, has an iron and sulfur-rich composition similar to DeMMO’s rock formations, which we now know are capable of driving the formation of microbial hotspots below-ground.