To learn more about our ongoing projects, please explore the project list below (click a title to expand).

Safeguarding the health and well-being of communities vulnerable to extreme heat in the Southwestern U.S. and Northwestern Mexico transboundary region (2018 - present) 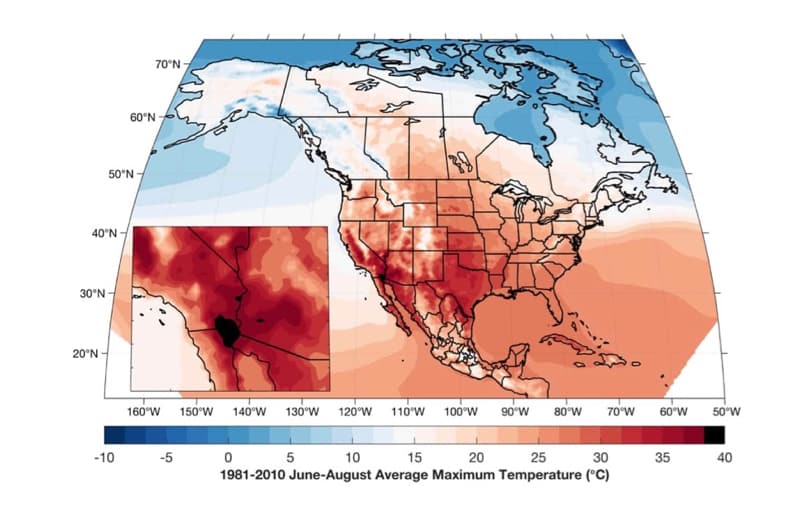 The increase in extreme heat and heat waves over the last decades has prompted a corresponding increase in heat-related mortality and morbidity, including in parts of the Southwestern U.S. and Northwestern Mexico. Relatedly, National Weather Service (NWS) offices and public and nongovernmental health organizations have developed heat advisory and mitigative messaging programs intended to safeguard the public from heat-health impacts. Yet even when people are aware of an extreme heat episode they tend not to modify their behavior or practices, raising important questions about the effectiveness of existing messaging and the capacities of vulnerable populations to respond. The objective of the proposed project is to assess historical heat extremes and their predictability at seasonal-subseasonal scales to inform geographically and socioculturally specific recommendations for improving the efficacy of heat advisory and mitigative messaging to vulnerable populations. The project is sited within the transboundary region encompassing the border cities of San Diego-Tijuana and Calexico-Mexicali, each made highly economically interdependent by the migration of laborers exposed to episodes of extreme heat. The proposed project will realize this objective by: 1) examining the potential of seasonal-subseasonal climate projections to anticipate extreme heat and heat waves to inform messaging types and the communication of uncertainty; 2) generating vulnerability maps to identify populations vulnerable to heat-health impacts within each border city of study to enable targeted messaging; and 3) applying the Protective Action Decision Model to understanding the decision processes of the identified vulnerable populations leading to action/non-action to protect against extreme heat when warned. Together this information will be used to inform targeted recommendations for improving the efficacy of heat advisory and mitigative messaging to those most vulnerable within the area of study. The project will additionally apply the results in examination of possibilities for coordination of climate and weather services and/or other cooperative institutional partnerships (e.g., in health) for addressing heat-health impacts preemptively across the sites of study.

Microplastics (MPs) are plastic fragments smaller than 5 mm in any dimension without specific lower limit, which are lately reported being accumulated across the planet, including pristine environments supposed to be free of human impact such as Antarctica, remote mountain-tops, and the deep sea ocean floor. After being first reported in the early 2000’s, MPs presence in the environment have caused increased concerns because of the unknown effects those particles may have on living organism3 and because of the magnitude of the problem, as 1.5 million tons of MPs are estimated to be released into water every year. The identified primary sources of MPs are commercial products such as face cleaners, drilling fluids, 3D printing products, pharmaceutical vectors, or industrial abrasives which contain particles known as primary MPs, defined as those MPs manufactured with a microsize.4 Another significant source of MPs is the degradation of larger plastic materials by mechanical, chemical, or biological processes, generating the so-called secondary MPs.5 Both primary and secondary MPs have been reported as persistent, potentially toxic pollutants entering freshwater environments with a great potential to become a global ecological and environmental problem. In the Southwest of the United States, for example, MPs have been detected in seasonal snow from the Sierra Nevada, which implies an increased potential for reaching surface drinking water sources. However, very little is known about their engineered separation, or degradation technologies. This project suggest a significant paradigm shift by searching for highly cost-effective methodologies for the separation and destruction of MPs in freshwater effluents which we consider a significantly pending scientific and technology task to prevent population exposure. The overarching goal of this project is to assess the capability of novel engineered processes to remove MPs in drinking water source effluents so that the water can be securely used for human consumption. 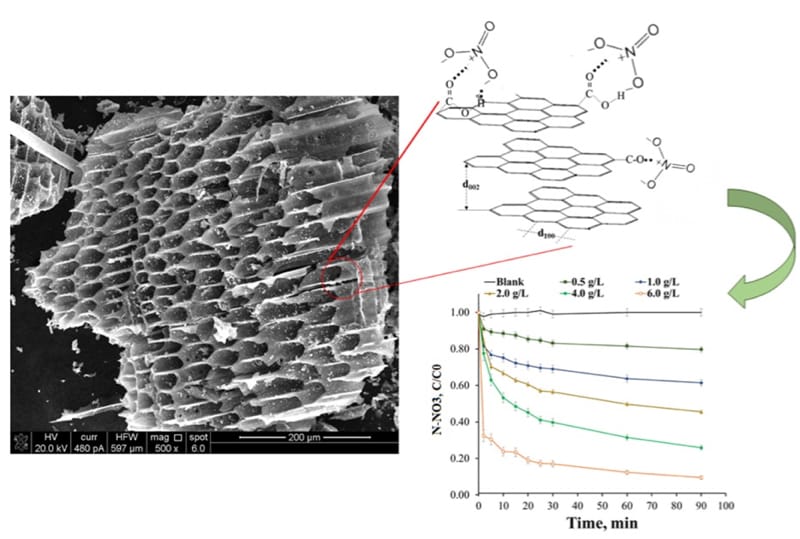 Access to safe drinking water have demonstrated play a primary role in the prevention of water-borne diseases all around the world. For example, since first introduction in early XX century, water disinfection has been suggested significantly contributing to a 29-years increase of public life expectancy in the United States. Probably, the major drawback identified for the process is the unintended formation of disinfection by-products (DBPs) which have been related with a wide variety of undesirable health effects. DBPs are formed by the reaction of disinfectants with natural organic matter (NOM), bromide, iodide ions, and/or unintended effect of engineered and/or materials during the water treatment process. Independently of the DBP class, the common factor in their production have been associated with NOM as the main precursor from several different sources, which removal potential is unknown in several cases. In some regions of the United States, periurban communities continue relying on unregulated private wells, which pose a potential threat for the health of the community members because of the elevated contamination risk and lack of water monitoring. Two significantly wide spread drinking water contaminants are DBP precursors and inorganic anions. In the case of inorganic anions, nitrate is one of the contaminants most frequently found in violation of health-based standards in the U.S. Presence of nitrate, in the drinking water reduces significantly the access to safe drinking water by the community members.

A list of past projects completed by our team in the Environmental Engineering Laboratory. 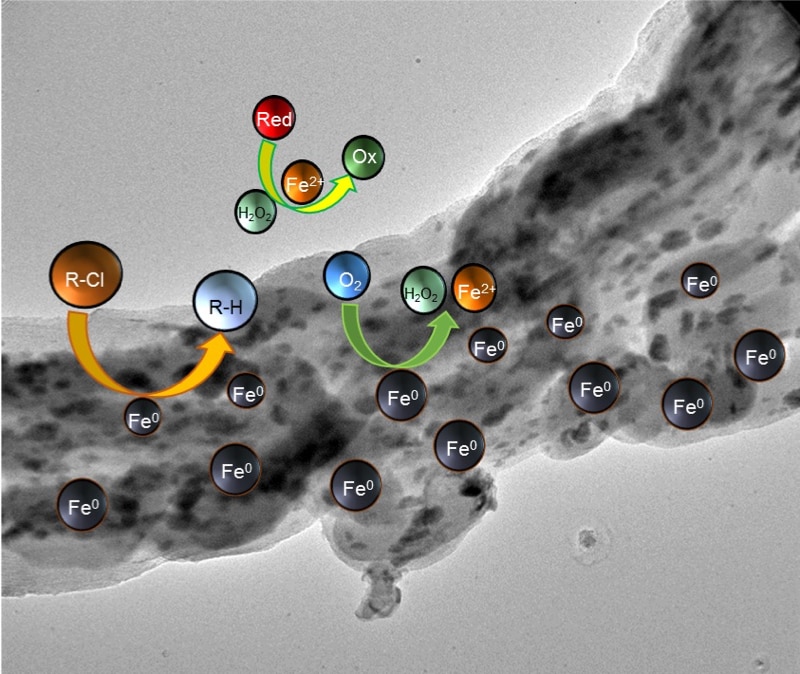 Water scarcity in arid and semiarid regions makes water supply reservoirs the only reliable water source for human beings. Urban water supply reservoirs act as receiving waters for treated wastewater and a source of drinking water. Numerous studies show that emerging contaminants (ECs) are ubiquitously found in wastewater effluents, surface water, and drinking water. A variety of untreated ECs may cause adverse effects on aquatic wildlife and humans. Urban watersheds are highly affected by wastewater contaminants in a metropolitan area, and improving water quality for residential uses is a global challenge. The long-term goal of this research proposal is twofold. First, we will synthesize and characterize zero-valent iron nanoparticles immobilized in a porous matrix and evaluate its capability to generate advanced oxidation/reduction processes. Second will use the developed materials to drive novel water treatment technologies capable to eliminate the occurrence of ECs (e.g., antibiotics) from wastewater effluents being released into the semiarid Las Vegas Valley watershed. This study area is extremely water stressed and the lack of a reliable water resource is one of the biggest challenges in terms of economic, sociological, and regulatory concerns. This watershed is also unique because it is greatly affected by extensive wastewater discharges and extreme flood events periodically.

The overarching goal of this project was assessing the application of engineered novel zero-valent nanoparticles embedded-immobilized in three different solid matrix (SBA-15, activated carbon and biochar) and the comprehensive understanding of the oxidation/reduction mechanisms promoted that may led to removal of antibiotics in treated wastewater. 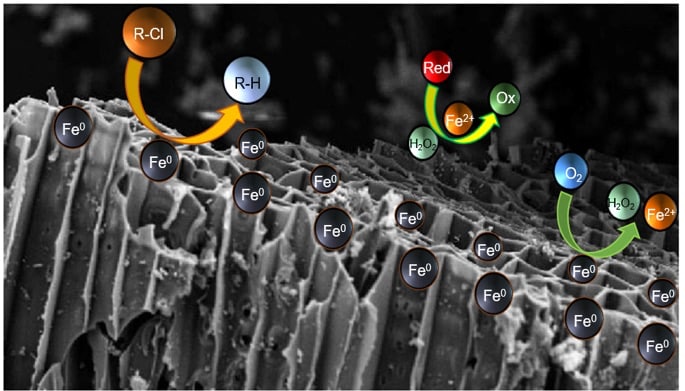 This project aims to investigate the advanced oxidation process using cost-effective/reusable nanomaterials to mitigate organic contamination from groundwater at U.S. Department of Energy (DOE) sites including Hanford and Savannah River locations. This goal is perfectly in line with the mission of the Office of Environmental Management (EM) to complete environmental cleanup of nuclear sites. Chlorinated organic compounds (COCs), such as trichloroethylene (TCE, C2HCl3) and tetrachloroethylene (PCE, Cl2C=CCl2), have been widely used for industrial purposes at DOE sites because of their excellent properties as solvents. Although the remediation of COCs is an urgent requirement due to their polluting effect on the environment and adverse effects on human health, existing remediation technologies have not sufficiently attained environmental recovery due to low migration efficiency and high cost. In order to enhance efficiency and reduce associated costs of large-scale contamination to facilities, nanotechnologies are proposed for groundwater remediation. Here, a team of University of Nevada Las Vegas (UNLV) and Desert Research Institute (DRI) researchers propose to apply advanced oxidation process (AOPs) using a reactor made of cost-effective and reusable nanomaterials to treat COCs. 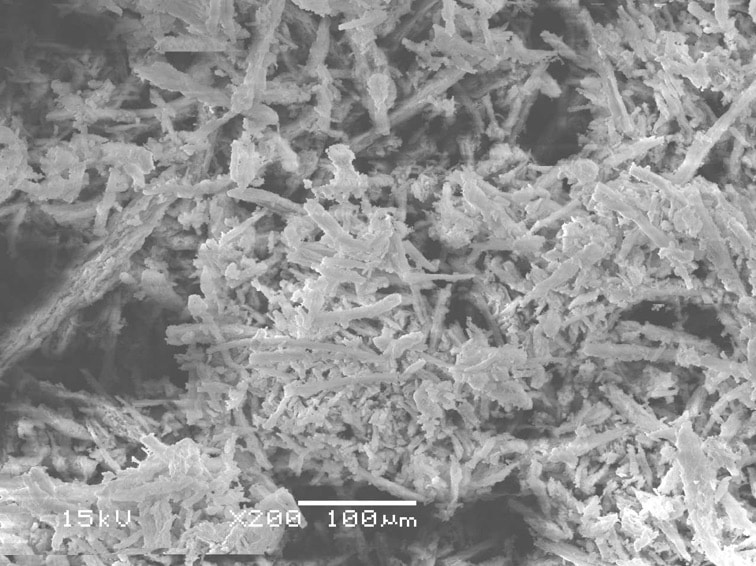 The objective of this proposal is to produce a water treatment prototype made with nanoscale zero-valent iron embedded in porous materials with enhanced properties to generate oxidation or reduction processes, and assessing its feasibility in environmental applications for the removal of emerging contaminants (ECs) in treated wastewater.

This project advances different aspects of Environmental Engineering and solve a specific contamination problem. nZVI has been studied for its ability to reduce or oxidize organic pollutants, but its tendency to agglomerate pose a significant limitation for its use. Immobilization technique is an approaches proposed to solve this limitation that has not being sufficiently tested. Our work aims to establish the reliable synthesis of nZVI embedded within the pores of a solid matrix that may avoid nZVI agglomeration and optimize its reactivity and stability for better performance in oxidation/reduction processes. The potential of the novel synthesized materials to promote oxidation or reduction processes will be assessed by measuring its capability to degrade ECs. In general this research will (i) demonstrate proof of concept on the use of novel nanomaterials for the treatment of wastewater contaminated with emerging contaminants (antibiotics), (ii) pioneer the preparation of zero-valent nanoparticles with well-controlled size, structure, and composition; immobilized in a porous solid matrix, (iii) test their enhanced capability for producing advanced oxidation or reduction processes (iv) identify the effect of common water parameters in the oxidation and/or reduction process applied for the degradation of antibiotics; and (v) identify the generation of reaction by-products and follow up the reaction using kinetic models.

Started June 1, 2013, the Solar Nexus Project (for short) is a multifaceted five-year research project focusing on the nexus (or linkage between) solar energy generation and Nevada’s limited water resources and fragile environment. The focus of the Solar Nexus Project is creating a center of research excellence on solar energy conversion to electricity, minimizing its negative impacts on water usage and the environment. In essence, seeking to create a paradigm shift in how solar plants are built and utilized, helping Nevada establish itself as a competitive state in the field of solar nexus research.