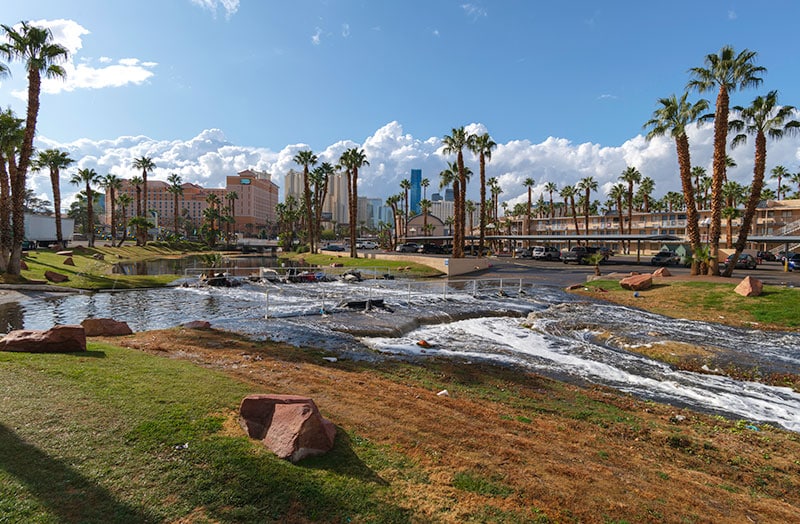 Las Vegas, with its rapid urbanization and desert landscape, is highly vulnerable to flooding. For this reason, flood managers have built an extensive system of drainage ditches and detention basins to protect the public. Now, a new study shows how intentional engineering and urban development are interacting with climate change to alter the timing and intensity of flood risk.

In a study published Jan. 6 in The Journal of Hydrometeorology, researchers from DRI, the Clark County Regional Flood Control District, the University of Wisconsin- Madison, and Guangdong University of Technology examine Las Vegas’ changing flood regime. Their results show that flood intensity has increased since the mid-20th century, with an abrupt shift occurring in the mid-1990s. Climate change has also shifted flood seasonality, with the storms and their resultant floods now occurring more frequently in winter, in contrast with the historically stronger summer monsoon season.

“When I looked at the data for annual flood peaks, I could see that something is changing,” said Guo Yu, Ph.D., lead author on the new study and hydrologist at DRI. “I wanted to understand the reason for this change as well as the physical mechanisms driving it, because that will help water managers and the public understand whether such a change will continue in the future, given climate and land use changes here.”

Las Vegas is one of the fastest growing metropolitan regions in the country. In 1950, fewer than 35 thousand people resided in the region; by 2020, that number grew to 2.6 million. Like many cities in the arid Southwest, development centers on the valley floor and spreads up into the natural topography of the surrounding mountains. As concrete and pavement replace more porous desert soils, the risk of flooding in human communities rises – catastrophic floods have caused fatalities as recently as 2022. To mitigate this risk, the Clark County Regional Flood Control District constructed a complex series of storm drains and culverts to capture and direct the flow of water away from populated areas and toward Lake Mead.

Over the same period, climate change has led to shifts in seasonal rainfall patterns. The Southwest has two distinct flood seasons: winter floods produced by atmospheric rivers and summer floods linked to the North American monsoon. Since 1950, daily rainfall amounts have increased in winter and decreased in the summer months.

“Historically, people in Las Vegas haven’t paid as much attention to winter floods as to summer floods,” Yu said. “But our research shows that there will be more frequent winter floods happening because of climate change. This is because the warmer sea surface temperatures on the Pacific coast will cause more atmospheric rivers, like what we’re seeing this January in California. And when these are positioned to bypass the Sierra Nevada mountains, they will very likely hit Las Vegas and cause severe winter rainfall and floods.”

The new research demonstrates an overall picture of shifting intensity and seasonality of floods in Las Vegas. The study authors are continuing to refine their understanding of flood risk in the region with an upcoming study, currently under review, that examines changing rainfall patterns in more detail.

“A lot of research focuses on a single driver – either land use or climate – but in Las Vegas, our study shows that both are changing and interacting with each other,” said Yu.

The full study, The Nonstationary Flood Hydrology of an Urbanizing Arid Watershed, is available from The Journal of Hydrometeorology: https://doi.org/10.1175/JHM-D-22-0117.1