Above: Throughout his career Jim Hudson, Ph.D., worked in planes such as the NCAR C-130 on several projects during his time at DRI.

Research Professor Jim Hudson, Ph.D., the Institute’s longest-serving employee, recently retired from DRI after 51 years studying cloud condensation nuclei (CCN) – tiny particles around which cloud droplets form. Hudson originally came to DRI as a graduate student in 1970, following the completion of his Master’s degree in physics at the University of Michigan. Here, he worked under the direction of cloud physicist and Director of Atmospheric Sciences Patrick Squires and graduated with his Ph.D. in Atmospheric Physics from the University of Nevada, Reno, in 1976.

Although he officially retired in August 2021, Hudson is continuing at as an Emeritus Scholar at DRI. We sat down with Hudson to learn about some of his career highlights:

DRI: What inspired you to become a cloud physicist?

Hudson: I did not set out to be a scientist although I had a lot of science interests as a child and took all math and science courses offered in high school. Other interest were law and politics. When taking the Kuder vocational interest test in my junior year in spite of conscious efforts to score high in persuasion (for law or politics) I could not resist science responses.  Thus, I was dismayed that of the ten interest categories science tied with persuasion. Physical Science, biology, and chemistry in the first three high school years did not pique my interest but physics in the senior year with its more logical nature turned me to science. Despite feeling at the time that scientists are mere pawns to politicians and businessmen I majored in physics and mathematics in the Honors College of Western Michigan University (BA 1968).  An attraction of physics was great job prospects, but that crashed, especially for high energy physics that had attracted me to the University of Michigan.  Thus, in my last semester and summer there I drifted into aeronomy, which included a good deal of physics.  When I learned that clouds also have physics, I found a more interesting application of my background.  But the familiar down-to-Earth clouds were not studied at Michigan.  DRI in Reno was the place to study the clouds that concern weather.

Thus, I traded the study of atomic nuclei for cloud nuclei under a founding father of cloud physics, Patrick Squires.  At that time the main goal of cloud physics was understanding the onset of precipitation and perhaps controlling it. This leads to cloud seeding, which usually involved the ice phase, which was thought to be the origin of all precipitation until warm rain was discovered in the 1940s.  Being from Australia where the ice phase is less common directed Squires toward warm non-freezing clouds.

DRI: Which of your career accomplishments are you most proud of?

Hudson: In 2012 I finally realized that the DRI high-resolution CCN spectrometers often resolved two modes.  Although I and many others had known for decades that direct aerosol size distributions often displayed bimodality, I did not appreciate its importance until then.  Only then did I begin analyzing cloud microphysics (droplet and drop size distributions) in terms of CCN bimodality.  I have so far found opposite responses to CCN bimodality in stratus and cumulus clouds.  Bimodality seems to make more smaller droplets and less drizzle in stratus but fewer larger droplets and more drizzle in cumuli. 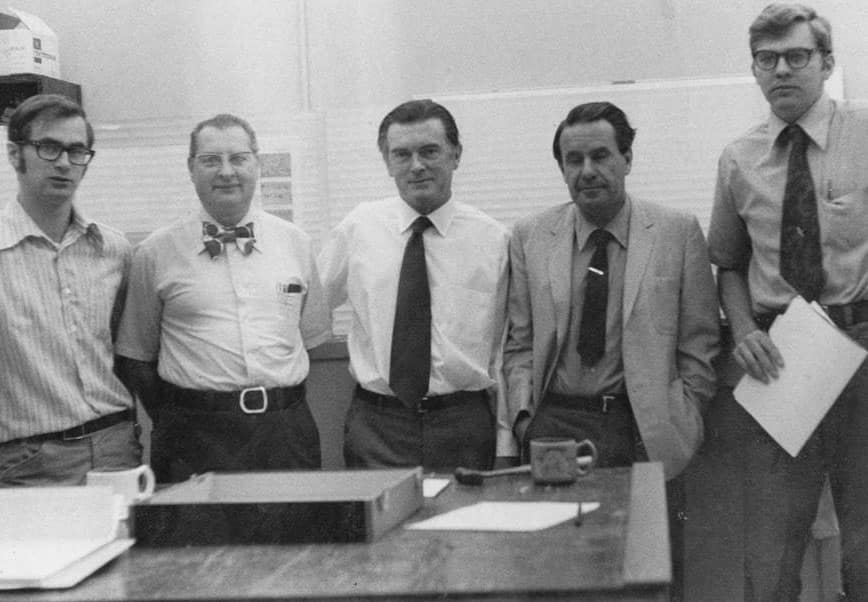 Jim Hudson, Ph.D. (left), poses for a picture with fellow scientists in September 1973 at a lab inside the Sage Building at UNR.

DRI: What unanswered questions do you still want to solve?

Hudson: What’s known as the “indirect aerosol effect” continues to be the largest climate uncertainty. This is the interaction of air pollution with clouds and relates back to the 1950s discovery by Squires and Sean Twomey, that continental clouds differ from maritime clouds. They have more droplets, smaller droplets, and don’t precipitate as readily as maritime clouds. Why is that? Because there are more CCN over continents than oceans. Why are there more CCN over continents? That is a billion-dollar question. Are there significant natural continental sources or is it all anthropogenic?  This is such a difficult problem that most research dances around this question.  We actually know more about the unnatural sources, the man-made sources, than we do about the natural sources. The indirect aerosol effect is so important because to some yet to be known extent it probably counteracts the so-called greenhouse trace gas effect.  One does not need a degree to know that clouds are complicated.  We have known since the 1950s that CCN affect clouds though many have claimed that air motions (dynamics) are more important.  But when the effects of the clouds on the CCN are realized things get even more complicated.  Clouds thus are both a sink and a source of the CCN that in turn profoundly affect them.  This makes the foundation of science, cause and effect, especially challenging for clouds.

DRI: What are you working on as an Emeritus Scholar at DRI?

Hudson: I just want to further analyze the data I’ve collected over the last 30 or more years but now in terms of CCN bimodality.  Few atmospheric scientists delve into the extensive sets of aircraft data.  I’ve been in more than 30 cloud projects where we fly 10-20 research flights of 4-12 hours duration in a month or two.  Multitudes of data are collected throughout these flights, but only small fractions are analyzed or presented.  This is very time-consuming work much of which would be impossible if I were still employed.  These CCN cloud interactions are vitally important for the indirect aerosol effect and for fundamental cloud physics. I feel compelled to complete as much of this analysis as possible.

DRI: What has changed most at DRI during the course of your career?

Hudson: In the first, two or three decades of DRI partial contracts were not done.  In the 1970s there was actual pasting of letters and words onto paper.  Before the turn of the century proposals were hand delivered to parcel services.  Before the teens, Journals were printed onto paper and did not have supplementary material.

DRI: What advice do you have for future scientists?

Hudson: Look at the data. All of the data. Not just the data that you think is good, the data that fits your model. In all science, there’s always conflict between the theorists (modelers in cloud physics) and the experimentalists (observationalists). Peter Hobbs of University of Washington would say, “the modelers believe the data, and the observationalists believe the models.” Each are more aware of the pitfalls of their own area. I think he overstated that because he did not believe many models.  Conflicts between modelers and observationalists seem to be most intense in cloud physics. When I was in high energy physics 50 years ago there were articles about how theorists looked down on the experimentalists even though science is based on experiments.

DRI: Who have you most enjoyed working with at DRI?

Hudson: Of course, I did a lot of work with Squires in the beginning and then John Hallett for several field projects.  We must remember the engineers, who really built and maintained the CCN instruments, Gary Keyser, Rick Purcell, Norm Robinson, Dan Wermers and Morien Roberts. And then my students, Paul Frisbie, Xiaoyu Da, Hongguo Li, Yonghong Xie, Seong Soo Yum, David Mitchell, Subhashree Mishra, Samantha Tabor, Vandana Jha and Stephen Noble.  Fred Rogers was my fellow student under Squires.  In earlier years I worked with Dennis Lamb, Dick Egami, and Eric Broten. 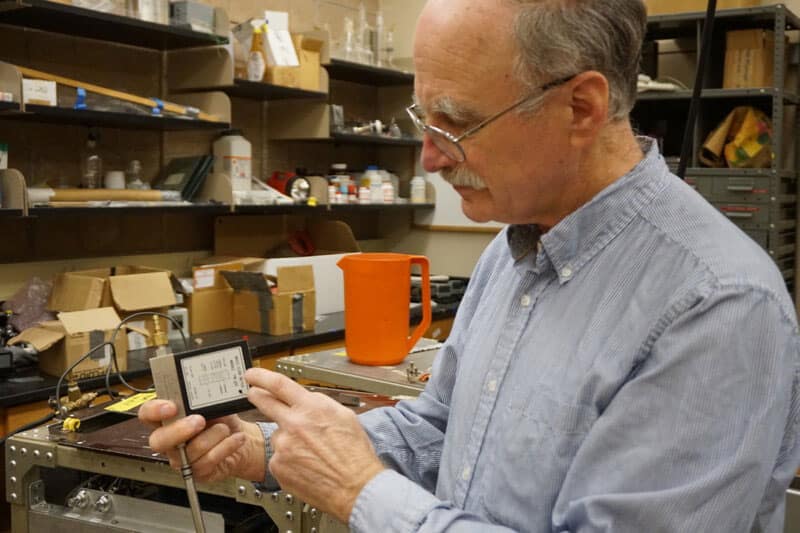 Jim Hudson, Ph.D., inventories the equipment in his lab space.