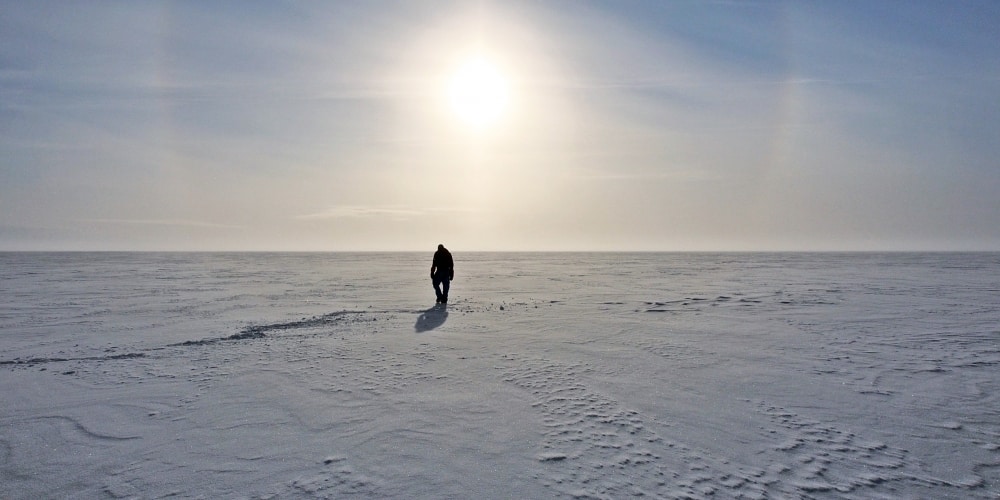 Above: A lone researcher is silhouetted by the summer sun, low in the Antarctic sky. Credit: Bradley Markle, UCSB.

Reno, Nev. (Sept. 20, 2018) – In September, new research by a team from the University of California, Santa Barbara, the University of Washington, Columbia University, and the Desert Research Institute (DRI) was published in the journal Nature Geoscience. The study, titled Concomitant variability in high-latitude aerosols, water isotopes and the hydrologic cycle, utilized data provided by Joe McConnell, Ph.D., director of DRI’s Ultra-Trace Chemistry Laboratory in Reno, Nev.

The study explains an observed connection between concentrations of aerosols (small atmospheric particles such as mineral dust and sea-salt) and the ratios of different isotopes of water (variant forms of H20 in which the atoms carry extra neutrons) found in Antarctic ice cores.

Aerosol measurements for this study, which consisted of more than 500,000 measurements of calcium and sodium in 2.1 kilometers (1.3 miles) of Antarctic ice, were made in the Ultra-Trace Chemistry Laboratory using a unique continuous flow system and inductively coupled plasma mass spectrometry. Parts of these aerosol records have been published previously, but they are published in full in the new study. The full news release from U.C. Santa Barbara is below. 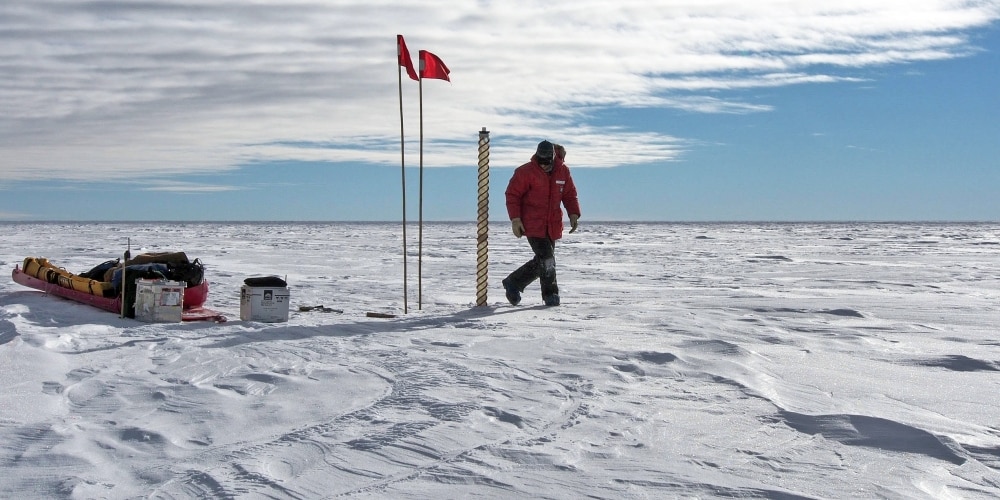 These shallow cores help us with the interpretation of the deep one,” explained UC Santa Barbara’s Bradley Markle. Credit: Bradley Markle, UCSB.

Dust, Rain and the Poles

Every year, the global climate transports billions of tons of dust around the world. These aerosols play a key role in many of Earth’s geological and biological cycles.

For instance, wind blows millions of tons of dust from the Sahara Desert across the Atlantic Ocean, where it fertilizes the Amazon Rainforest. The collective action of billions of trees pumping water from the ground then generates its own weather pattern, affecting the whole of South America.

When climate scientist Bradley Markle, at UC Santa Barbara’s Earth Research Institute, spotted a correlation between the ratios of heavy molecules and the concentration of particulate matter in the Antarctic ice cores he was studying, he immediately set out to uncover the deeper connection. His findings appear in the journal Nature Geoscience.

For decades scientists have been puzzled by the relationship between aerosol concentrations and the ratios of different molecules of water in ice cores, and Markle appears to have finally found the connection. His research increases our understanding of the processes at work in Earth’s atmosphere and could help to improve our climate models.

Markle focuses on understanding how climactic processes concentrate atoms of different weights in certain areas. Consider oxygen, for example. Every oxygen atom has eight positively charged protons. That’s what makes it oxygen. However, the number of neutrally charged neutrons it contains can vary from eight to 10. And the greater the number of neutrons, the heavier the isotope.

Water has one oxygen atom bonded to two hydrogen atoms, so water containing lighter isotopes, like 16O — which has eight neutrons — weighs less than water with heavier ones, like 18O — which has 10. Certain processes affect heavier molecules more than their lighter counterparts, leading to varying distributions of different weights across the globe. So even though 99.7 percent of oxygen on Earth is 16O, slight differences in the ratio between 16O and 18O provide scientists with valuable clues about the planet’s climate. In fact, measurements of these ratios in ice cores underlie our most detailed long records of Earth’s temperature history, Markle explained. They span hundreds of thousands of years before humans started measuring temperature directly. 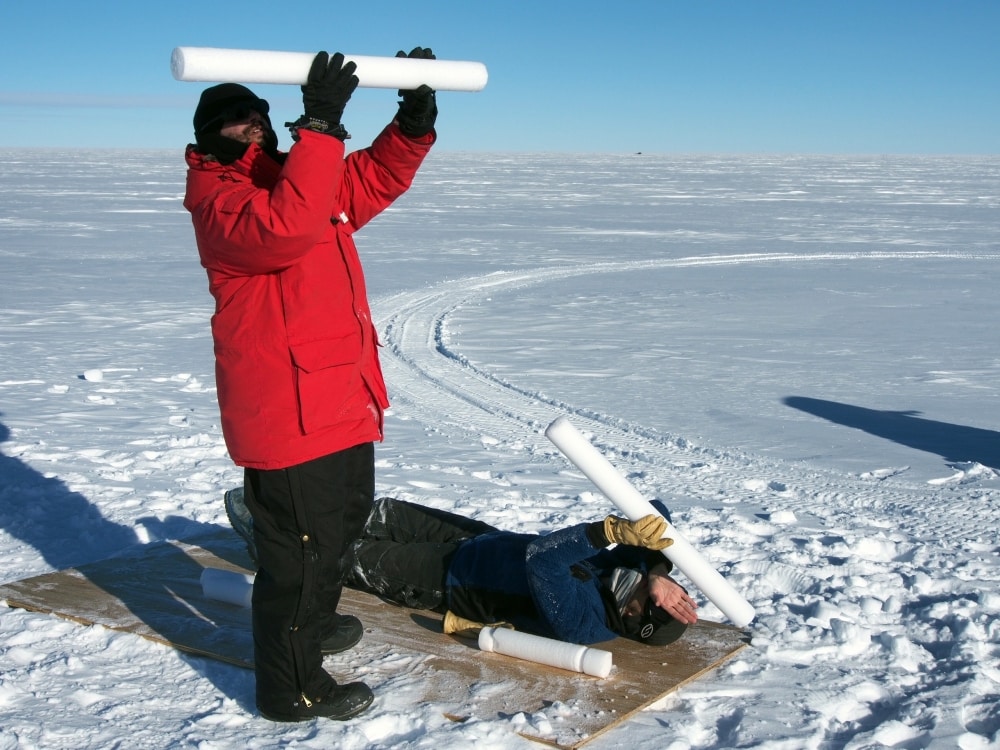 Researchers examine the ice cores, which are backlit by the sun. Credit: Bradley Markle, UCSB.

Scientists noticed that ice layers with higher ratios of heavy isotopes also contained a greater concentration of trapped aerosols. “And it’s a very unique relationship, too,” Markle said. “It’s very clearly logarithmic … so it seems like it needs a strong, logarithmic process to account for it.

“The correlation between the thing that records the climate (the water isotope ratios) and these aerosols is extremely good,” he continued. “Better than you get in almost anything else in this field.”

Precipitation has the most influence on the percentage of heavy isotopes that make it to high latitudes, since heavier water molecules condense more readily compared to light ones, Markle explained. Warm air holds more moisture than cold air, so as it cools on its way toward the poles, the moisture condenses and preferentially loses the heavier molecules. If the poles become warmer, the air will not cool as much, so a greater number of heavy molecules will make it to higher latitudes. As a result, scientists associate low ratios of heavy isotopes with colder periods in Earth’s history.

Scientists suspected that these climatic conditions impacted the locations these aerosols came from, somehow effecting greater emissions during cooled periods than warm ones. However, years of research had yet to produce a model that fit the data. In addition, source variability is challenging to investigate because it requires looking at myriad factors in many different places. “People have investigated it, and they can’t get the sources to have such large changes in aerosol emissions,” Markle said.

Markle compared aerosol data from the Antarctic ice cores with similarly aged seafloor sediment from the oceans just below South America, which is the dominant source of the airborne dust found in Antarctica. He discovered that aerosol levels in the ocean sediment increased three- to six-fold during the last glacial maximum. However, concentrations in the ice cores soared to levels 20 to 100 times baseline rates. Clearly most of the change seen in the ice cores must be due to factors far from the source of the aerosols.

Then Markle recognized a similarity between the isotope ratios and the aerosol concentrations: The physics of moisture in the atmosphere is driving both of them. 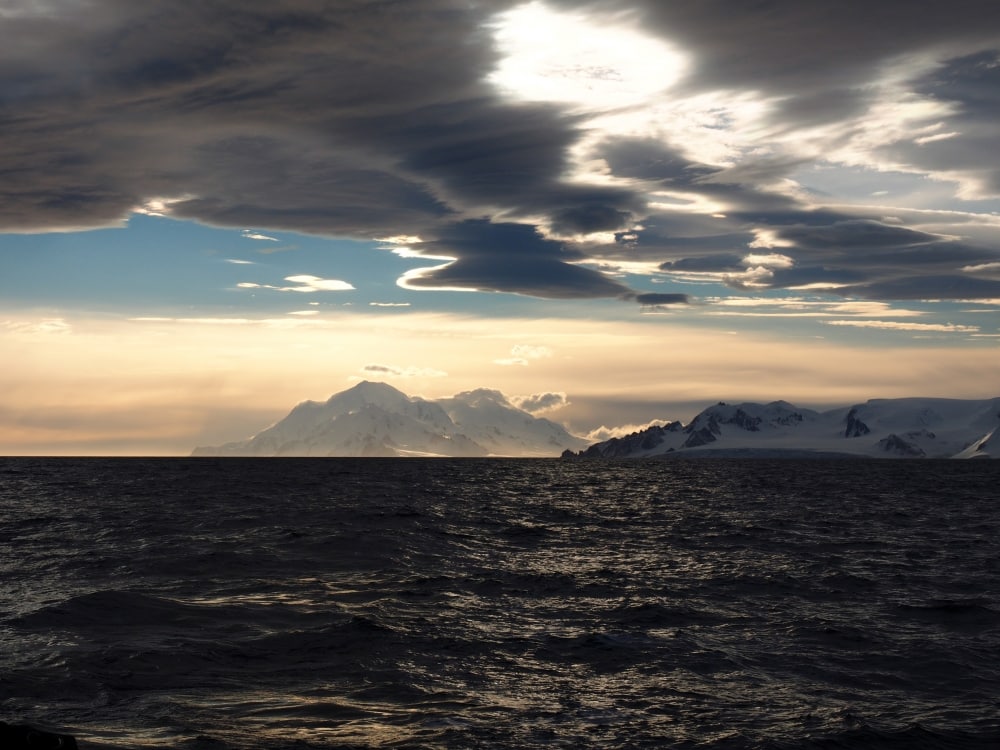 A view of the Antarctic coast from the Southern Ocean. Credit: Bradley Markle, UCSB.

Without aerosols, the world would have no rain. Water vapor needs a surface to condense, or form droplets. This could be a steamy shower window or a fleck of dust floating high in the clouds. In this way, precipitation washes the sky of aerosols. More precipitation between the source of the aerosols and the poles means lower concentrations of aerosols make it to the glaciers, and thus into the ice cores. And more precipitation also leads to lower ratios of heavy isotopes. Markle had discovered the connection.

What’s more, the scouring effect precipitation has on aerosols is exponential, meaning its influence increases the longer, and farther, the aerosols travel from their source. Precisely the sort of relationship Markle needed to match the data.

“This rainout theory ends up solving a whole bunch of things at once,” Markle said. It clarifies the correlation between aerosol concentrations and water isotopes, as well as the greater variability in aerosol levels at the poles than in locations closer to the source of the debris. The effect also explains why dust levels vary more than sea salt levels in the aerosol record: The ocean is closer to Antarctica than the source of dust, so precipitation has less impact on the amount of sea salt that makes it to the West Antarctic ice-sheet.

Markle is cautious about making predictions for our current climate change. “The effect that we saw in the ice cores was a really big effect, but it’s a big effect on multicentury, multimillennium time scales,” Markle said. Other sources of variability may be more prominent over shorter timeframes, he explained.

Nonetheless, warming temperatures would forecast decreasing concentrations of aerosols reaching the Arctic and Antarctic. Since aerosols reflect heat and sunlight, this could exacerbate warming trends over long periods of time. Changes in aerosol distribution could also affect the ocean, since they also contain nutrients and minerals vital to ocean’s food web.

Markle plans to leverage his newfound understanding of these relationships to investigate changes not only in the strength of hydrologic cycle but also in its spatial pattern. “Because the hydrologic cycle is tied to Earth’s temperature gradients, I think we can use these records to understand changes in polar amplification,” he explained. This is the phenomenon where the poles warm more than lower latitudes during climate change.

“This is a big deal in modern climate change,” he added, “and understanding how it has happened in the past would be extremely useful.”

This news release was originally published by the University of California, Santa Barbara. To view the original story, please visit:  http://www.news.ucsb.edu/2018/019185/dust-rain-and-poles