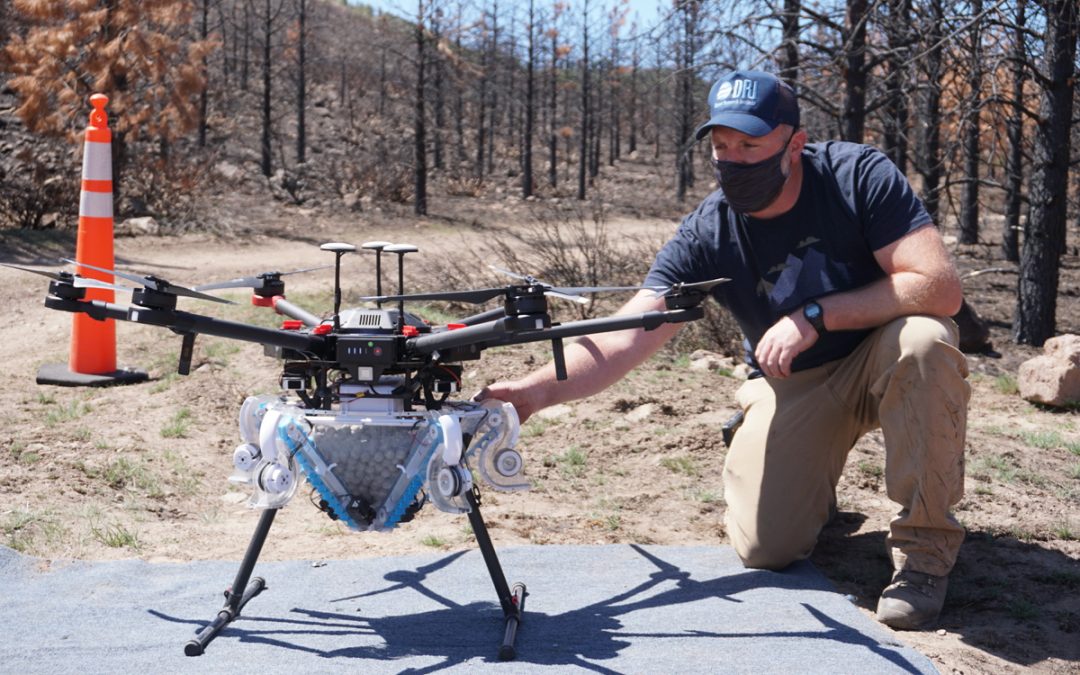 As Western wildfires grow larger and more severe, the need for efficient and effective forest restoration techniques is growing as well. In April, scientists from the Desert Research Institute (DRI) partnered with the Sugar Pine Foundation, Flying Forests, and the Carson Ranger District of the Humboldt-Toiyabe National Forest to test a new method for reseeding burned slopes by drone. 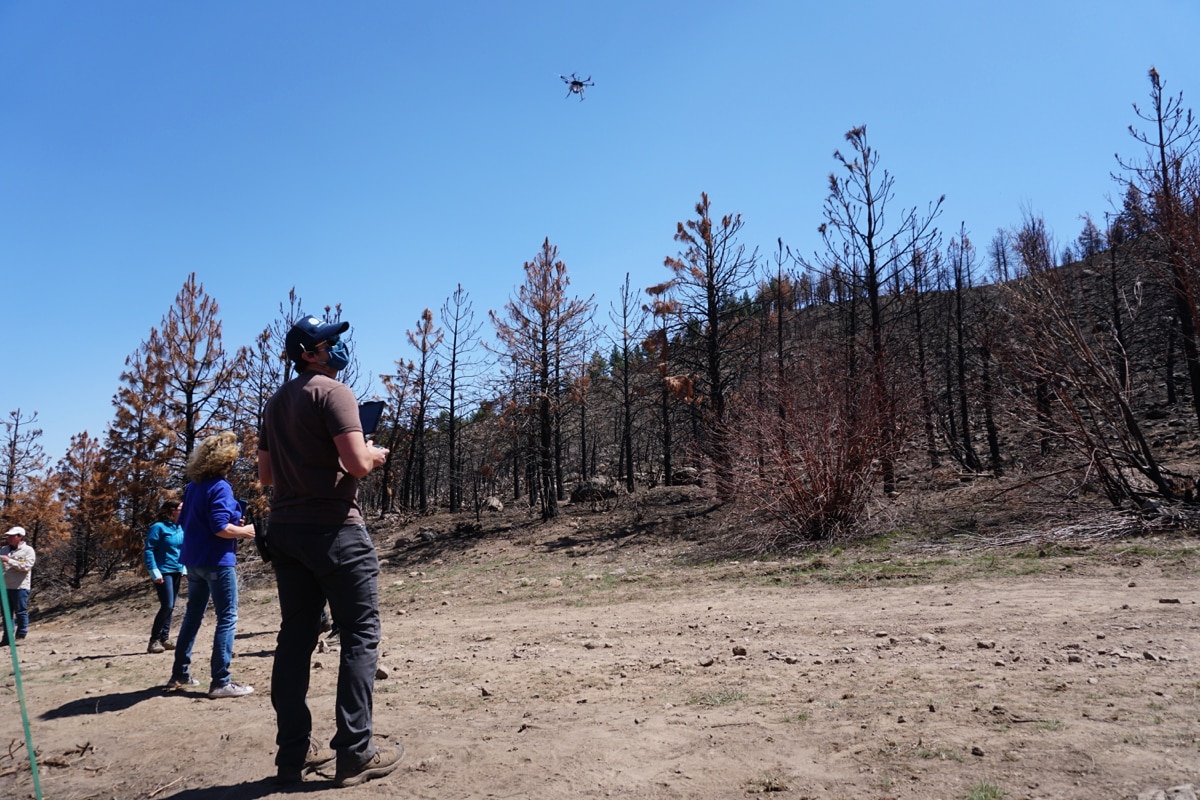 Patrick Melarkey of the Desert Research Institute flies the drone during a reseeding flight at the Loyalton Fire burn area on April 22, 2021.

Drones are being tested for use in reseeding projects in other parts of the world, including California and the Pacific Northwest, but this project marks the first time this technology has been tested in the Eastern Sierra. For a trial area, the group selected a 25-acre site in a portion of the Humboldt-Toiyabe National Forest that burned in the Loyalton Fire of August, 2020. 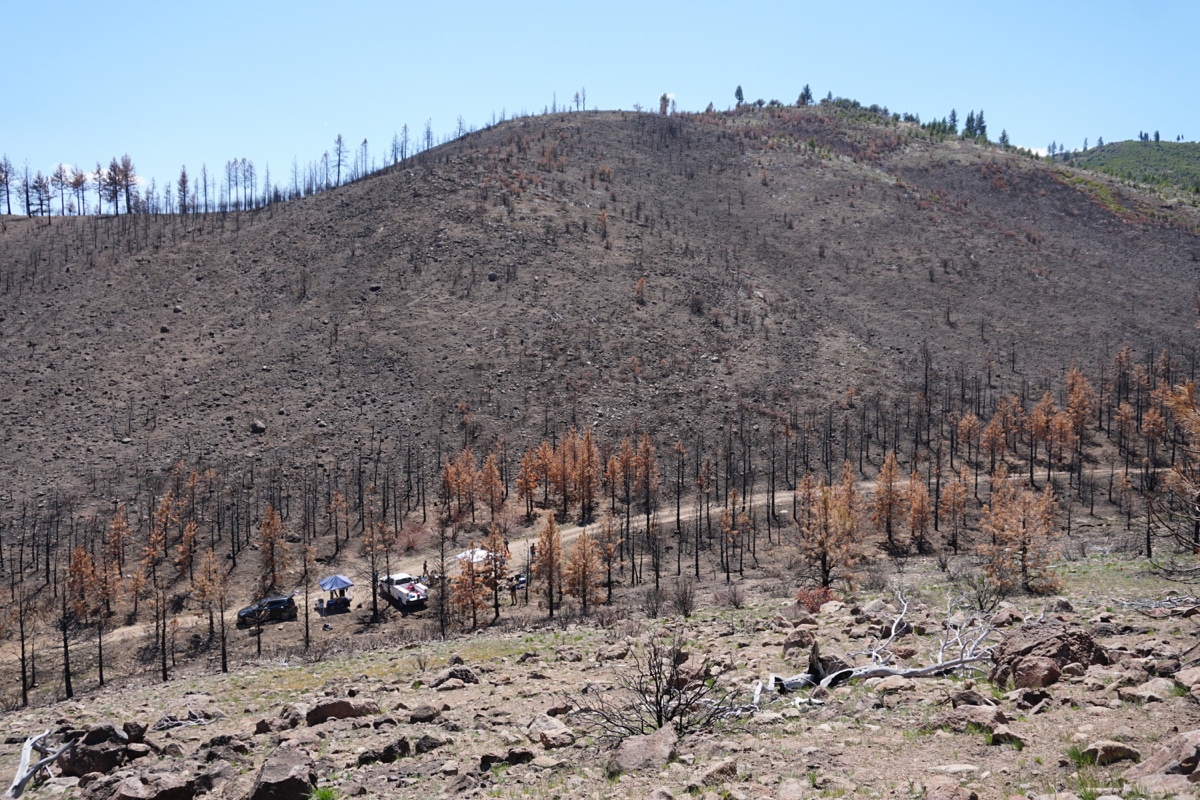 A hillside burned by the Loyalton Fire during August 2020. On April 22, 2021, the Desert Research Institute, Flying Forests, the Sugar Pine Foundation, and the Humboldt-Toiyabe National Forest conducted a reseeding project at this site using new drone technology.

Prior to the drone reseeding event, DRI archaeologist Dave Page, M.A., conducted aerial mapping at the burn site. This detailed imagery was used to determine an appropriate flight path for dispersing seeds evenly across the burn area, and was programmed into software that guided the drone during the reseeding mission.

A drone carrying small seed balls of Jeffrey pine takes flight during a reseeding project at the Loyalton Fire burn area on April 22, 2021.

On April 22nd and 23rd, 2021, DRI scientists Patrick Melarkey and Jesse Juchtzer provided technical expertise as drone pilots for the reseeding portion of the project. Over the course of two days of flying, Melarkey and Juchtzer dropped 25,000 Jeffrey pine seedballs across the 25-acre burn area. The drone made a total of 35 flights, carrying approximately 700-750 seedballs per flight. 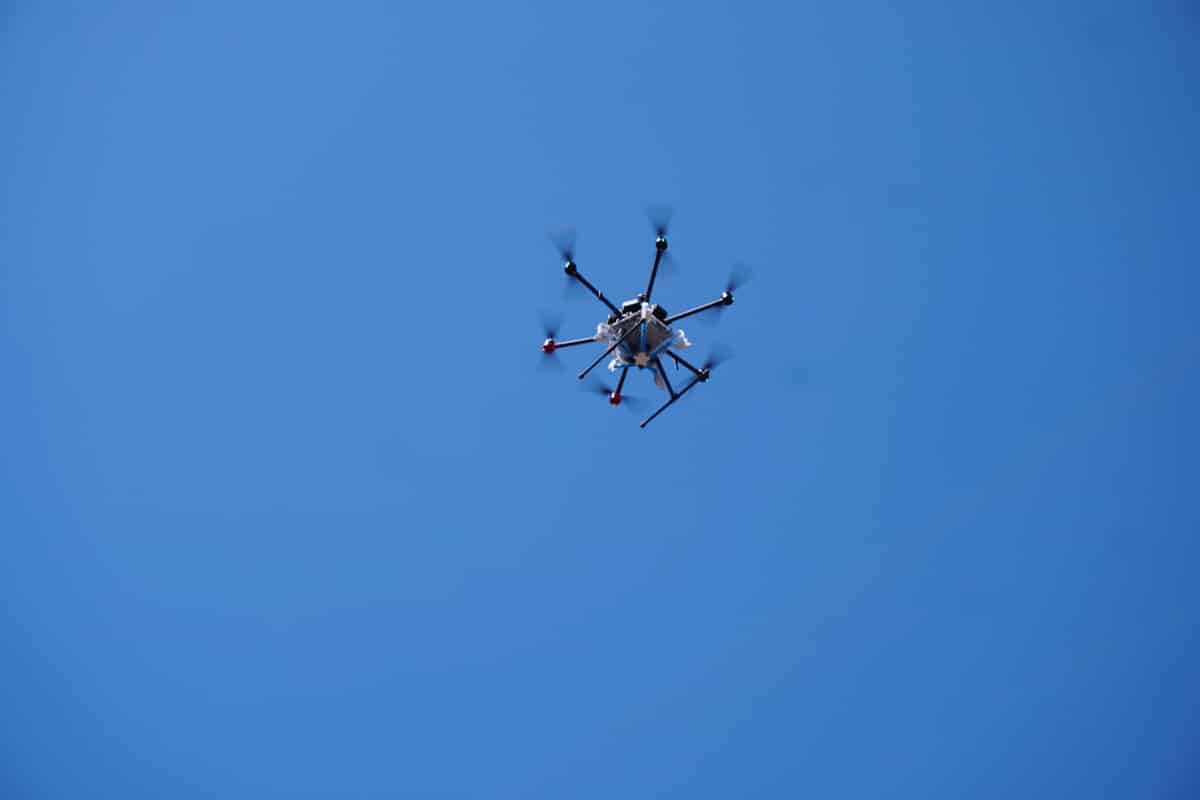 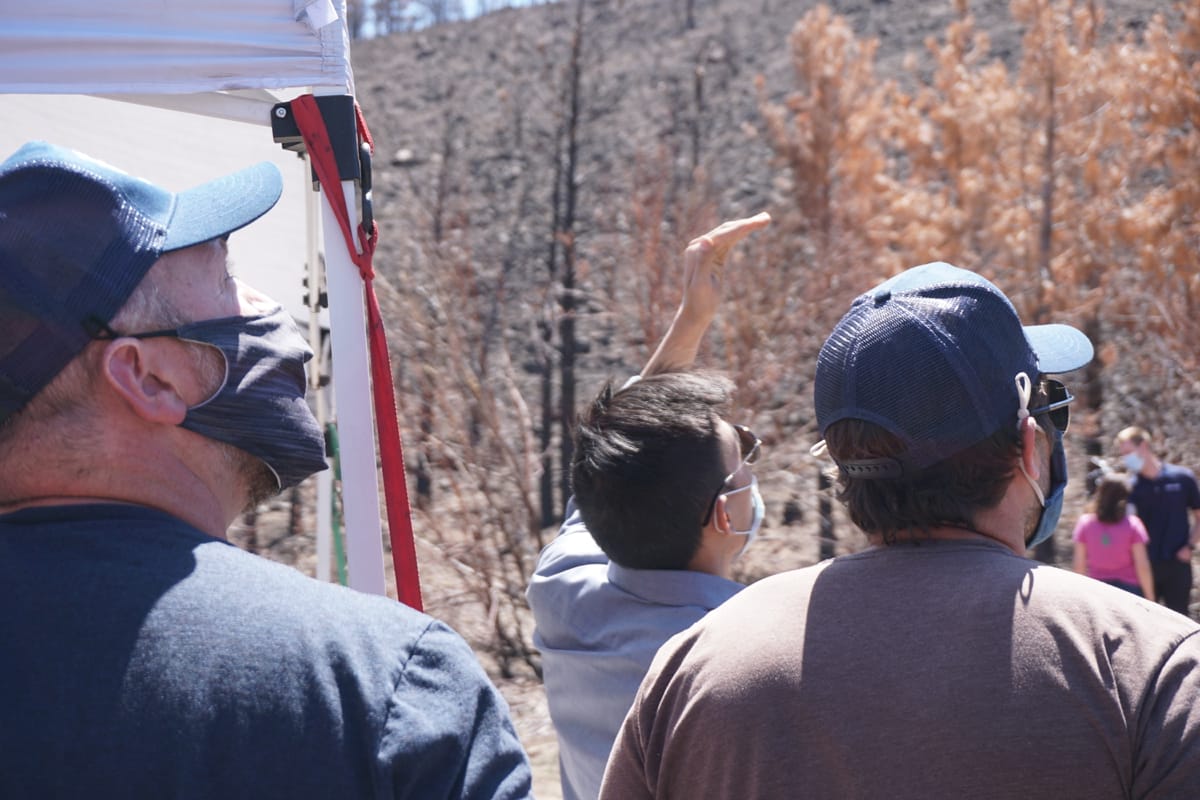 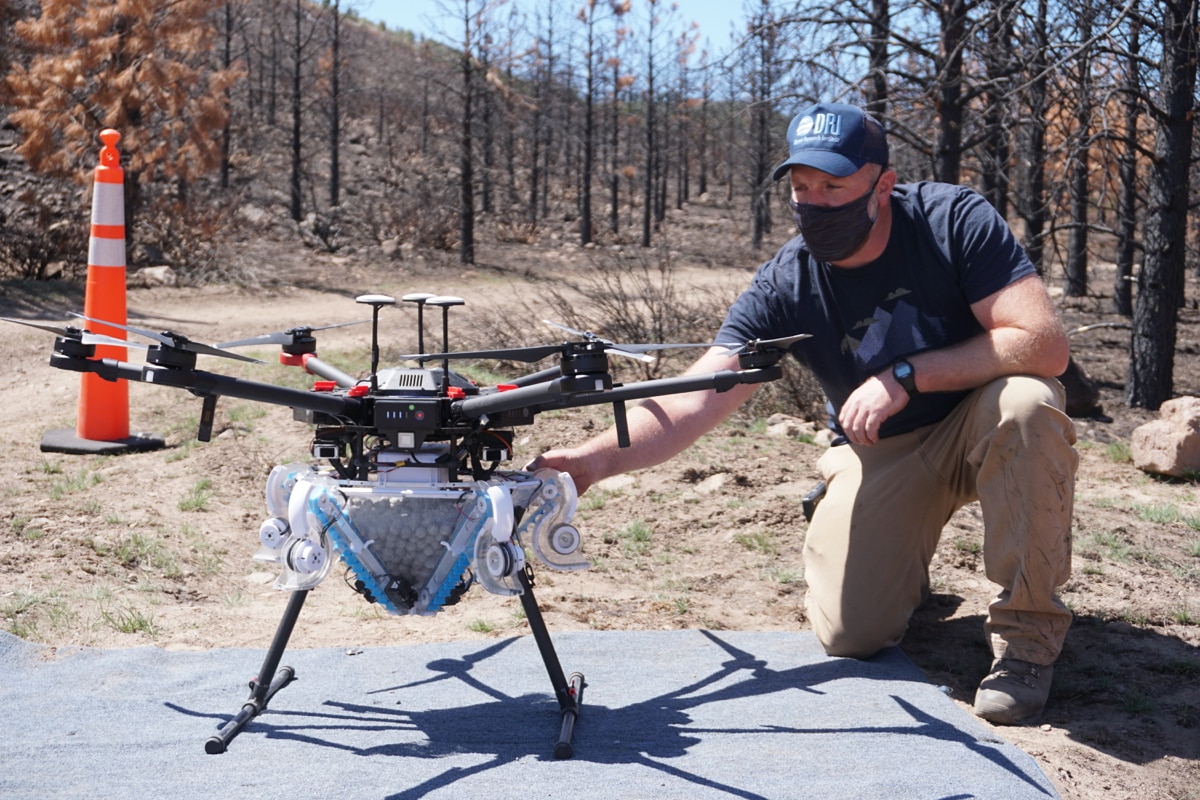 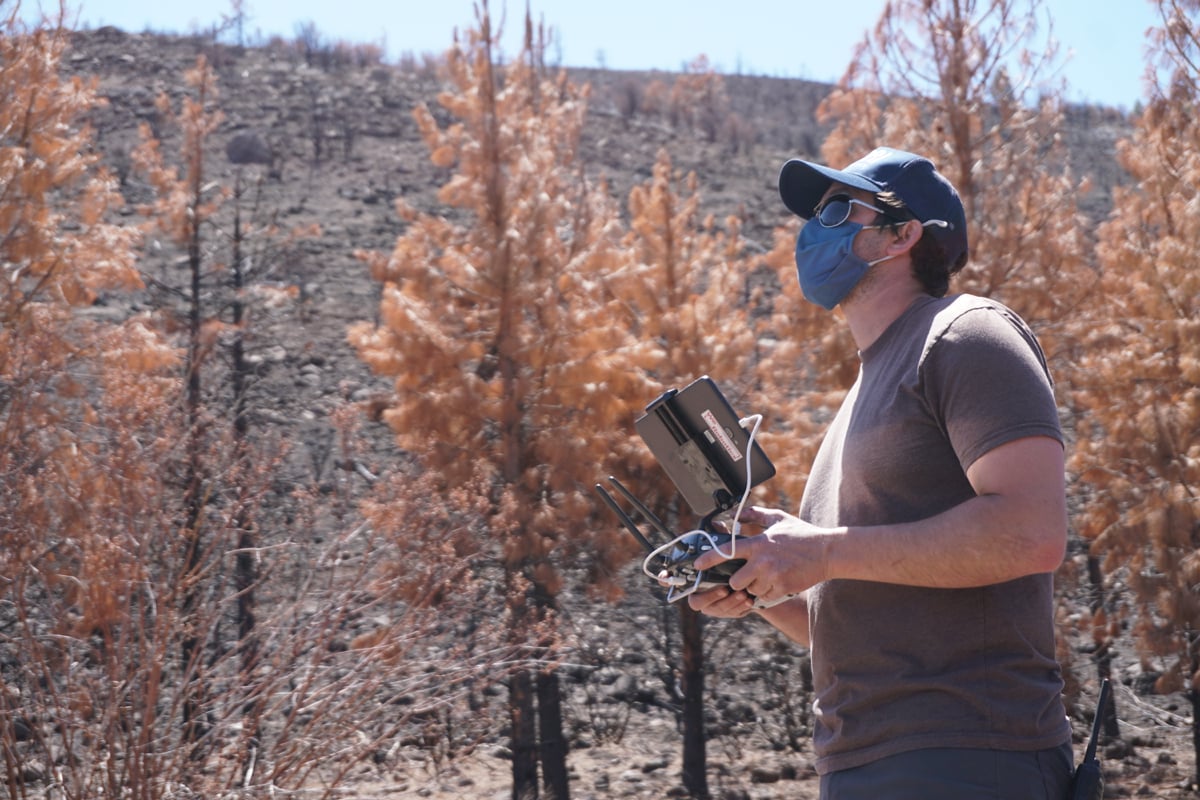 Above: Patrick Melarkey and Jesse Juchtzer from DRI fly a drone carrying small seed balls of Jeffrey pine during a reseeding project at the Loyalton Fire burn area on April 22, 2021.

The seed balls were provided by the Sugar Pine Foundation, which worked with local community volunteers to collect more than 30 pounds of Jeffrey pine seed during the past year. The seed was combined with soil and nutrients into small balls that could be carried and distributed by the drone. 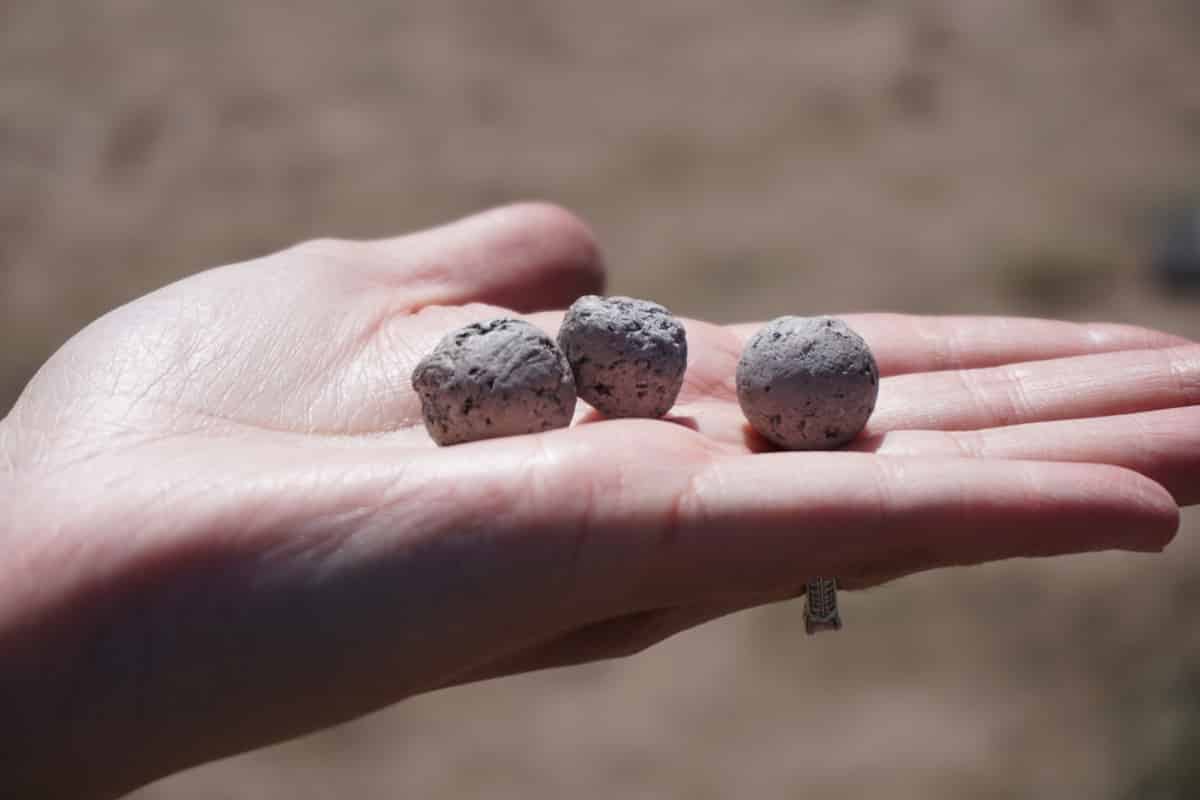 The technology used on this project to plant with drones was invented by Dr. Lauren Fletcher of Flying Forests. Fletcher is a 5th generation Nevadan and graduate of the University of Nevada, Reno, Stanford, and Oxford. 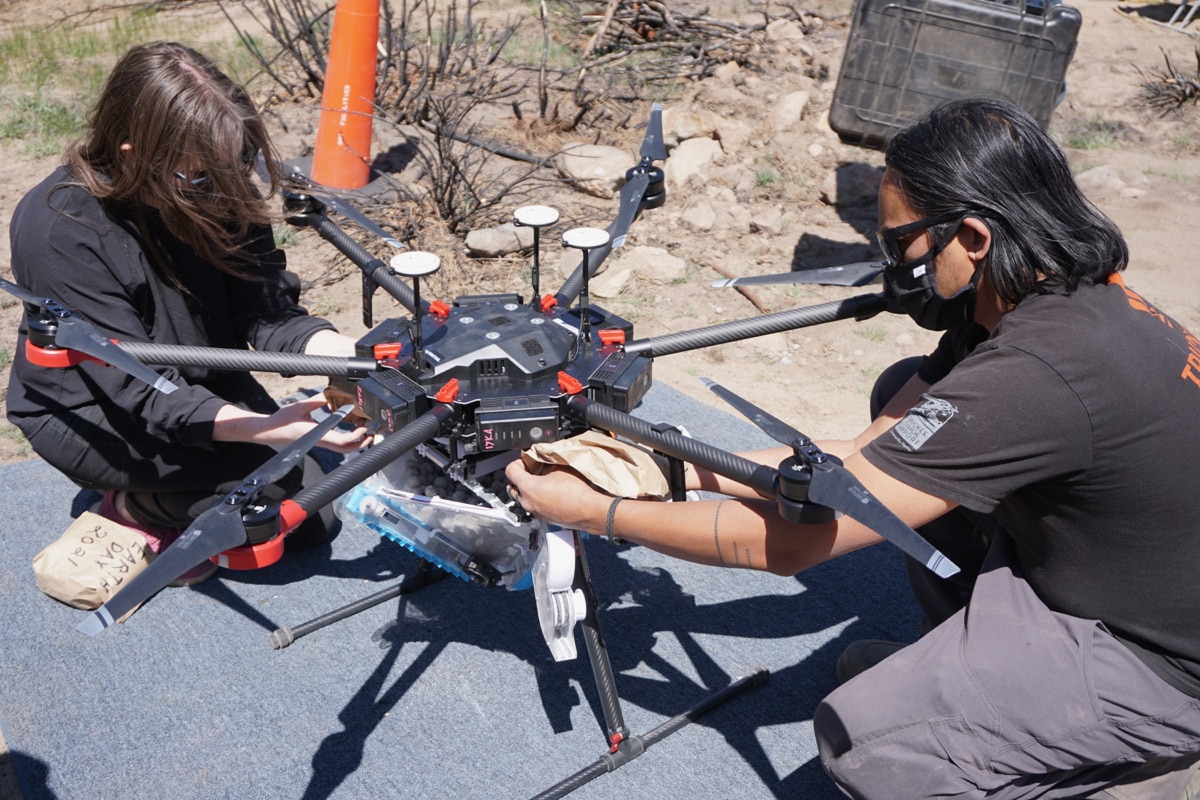 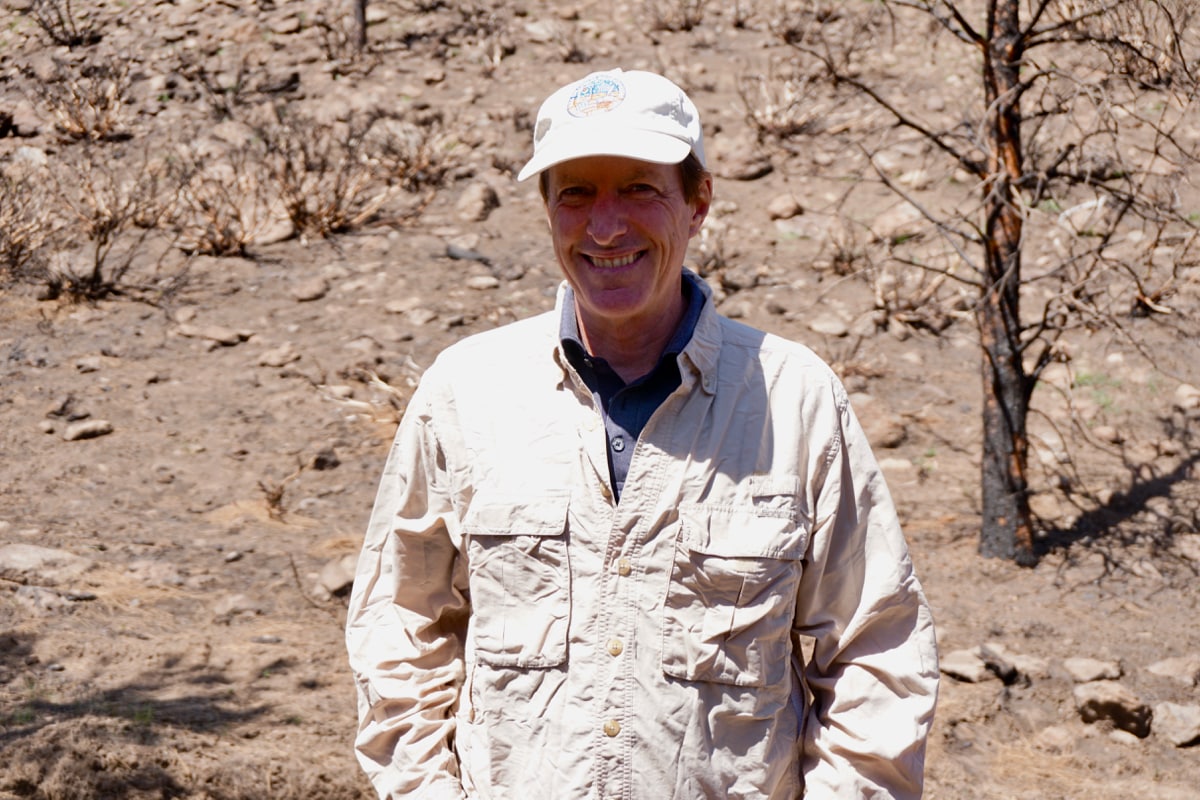 Above, left: Personnel from Flying Forests load seedballs of Jeffrey pine into a drone prior to a reseeding flight at the Loyalton Fire burn area on April 22, 2021. Above, right: Lauren Fletcher of Flying Forests invented the seed-spreading technology that was used during the drone reseeding project.

Replanting native trees in burned areas can help stabilize slopes, reduce erosion, discourage growth of non-native plant species, and speed up the recovery of critical habitat for wildlife. Reforestation of burned areas is often done by planting small tree seedlings – but in areas far from roads or areas with especially steep terrain, this method can be expensive, labor-intensive, and dangerous. Spreading seeds by drone may provide a safer, cheaper, and easier alternative.

Next, the group will monitor and study the area to observe the success rate of this method of restoration. 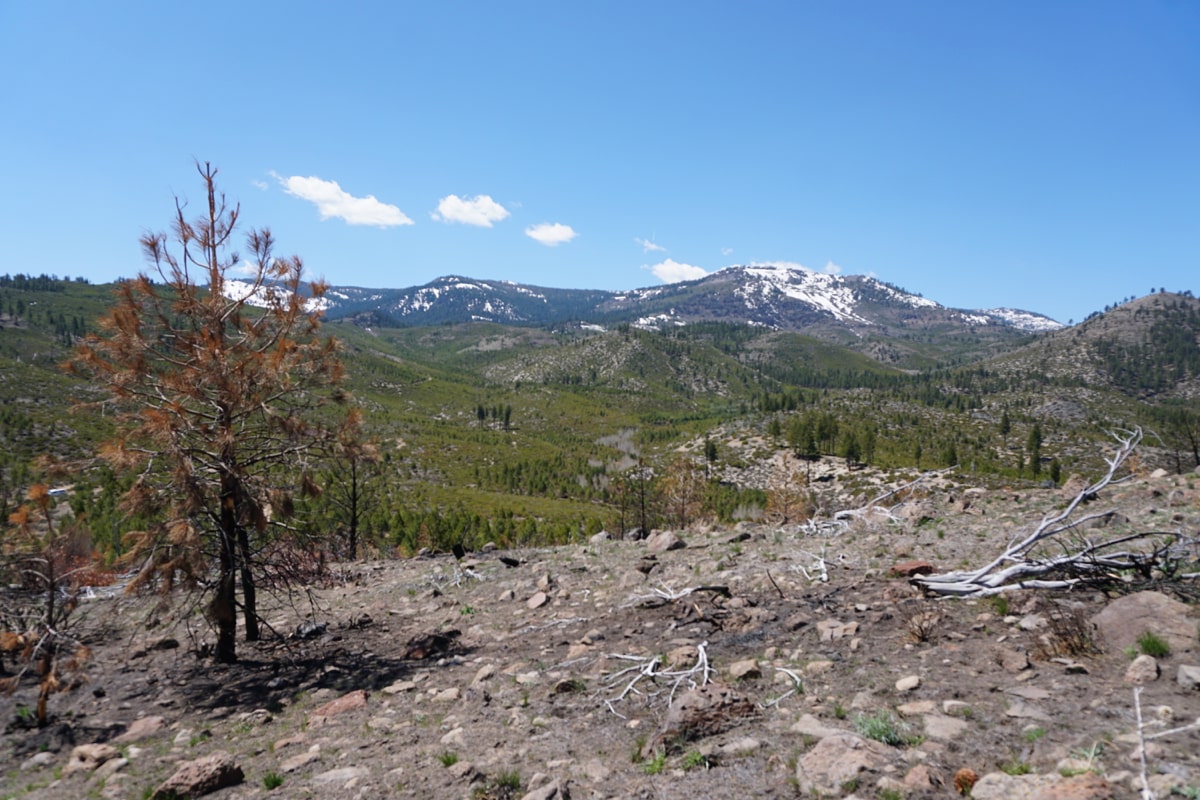 Looking west from a hillside burned by the Loyalton Fire during August 2020. On April 22, 2021, the Desert Research Institute, Flying Forests, the Sugar Pine Foundation, and the Humboldt-Toiyabe National Forest conducted a reseeding project on the burn area using new drone technology.

Restoring area forests one flight at a time, KOLO8 – https://www.kolotv.com/2021/04/23/restoring-area-forests-one-flight-at-a-time/ 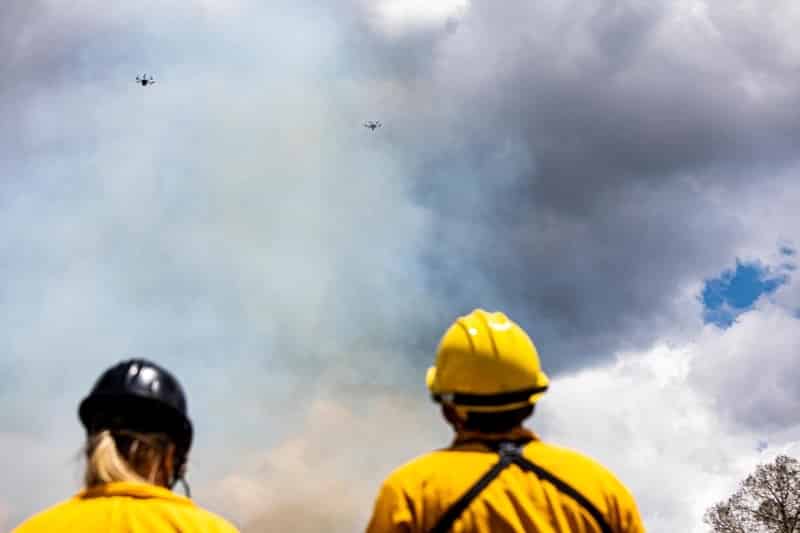 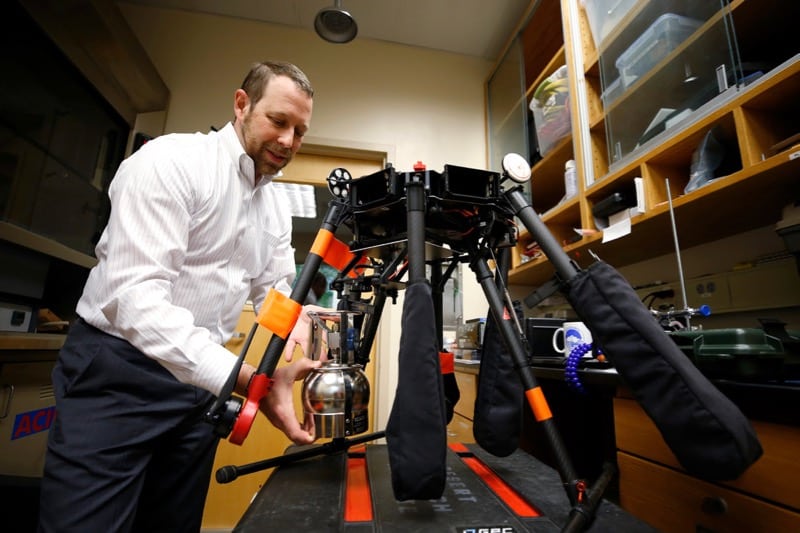 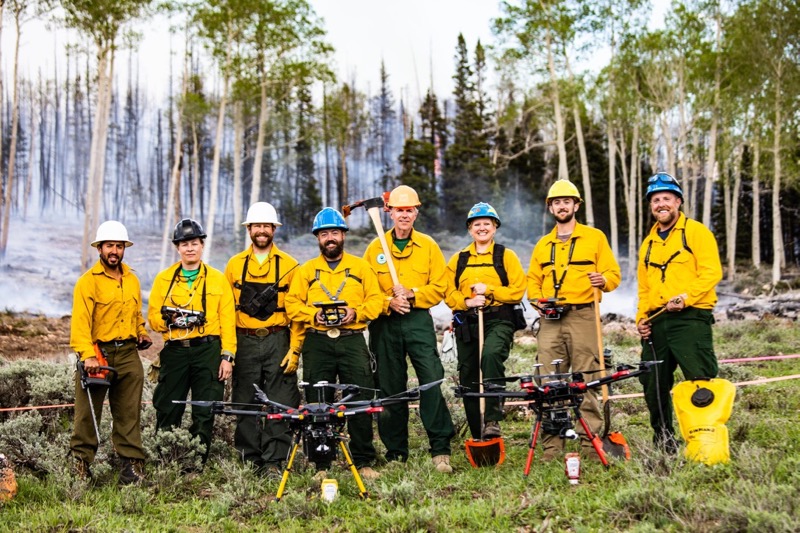