California and Nevada have made significant progress in addressing climate variability and climate change impacts to their state and local communities, but both states remain vulnerable to climate change impacts. Among these are public health threats from extreme heat and wildfire smoke, impacts on water resources from extended drought, reduced snowpack, and extreme precipitation events, and in California, flooding, beach erosion and degradation of coastal infrastructure and communities. CNAP, in response to these challenges, proposes a community-focused portfolio of research, engagement, and workforce development to be conducted by a renewed team of California and Nevada social and physical scientists. The work proposed emphasizes partnerships and supporting frontline communities that have been and are impacted by social and environmental inequities.

*The proposal for this project is currently under review. 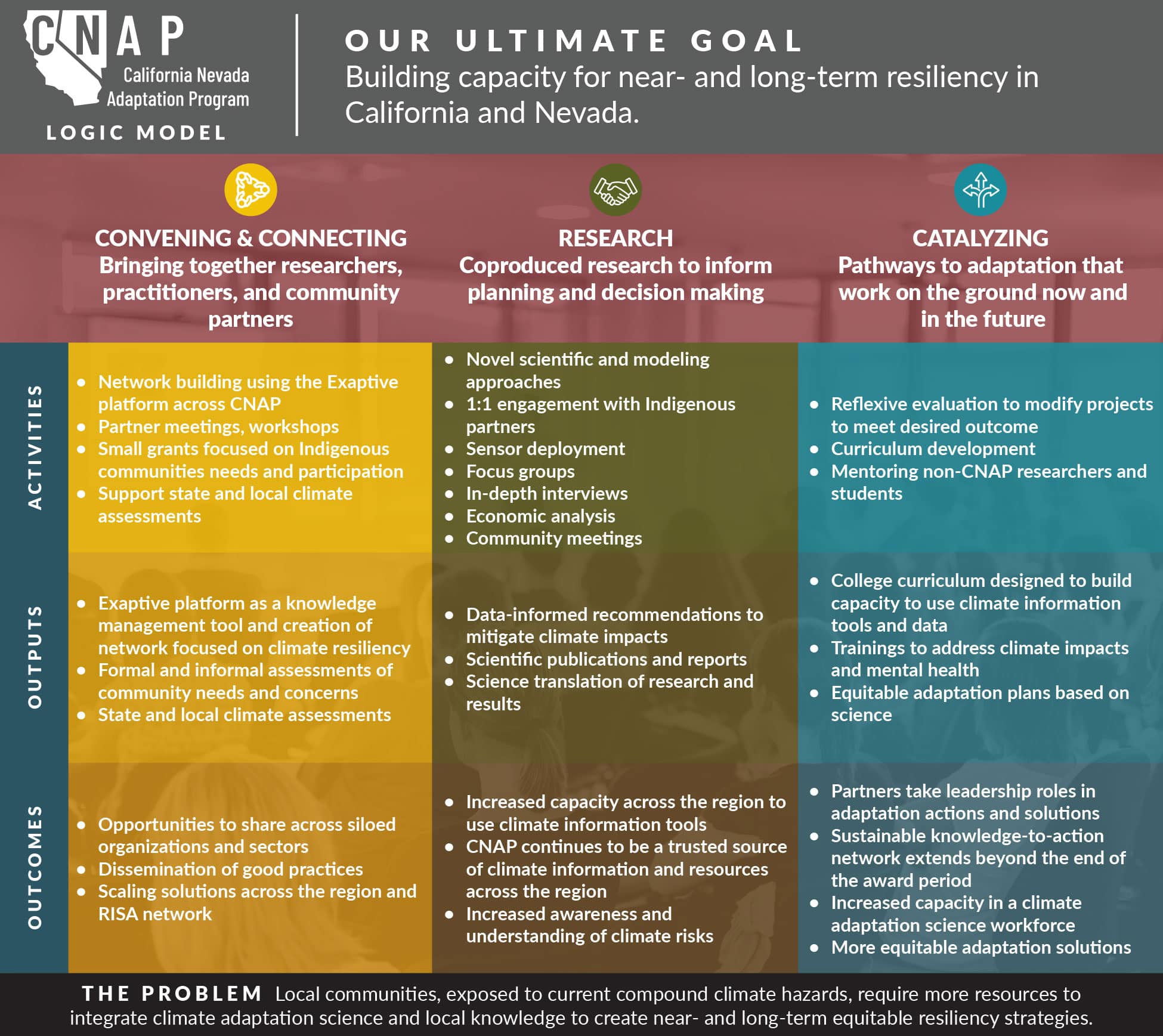 To support community level adaptation, our logic model contains three pathways. The first pathway focuses on efforts to convene and connect our researchers, partners, and collaborators across the CNAP program. The second pathway is our research, with six core projects that largely focus on frontline and historically excluded communities. The third pathway will intentionally focus on using our convening/connecting and research pathways to act as catalysts to create new adaptation solutions to respond to current and future climate risks and hazards. 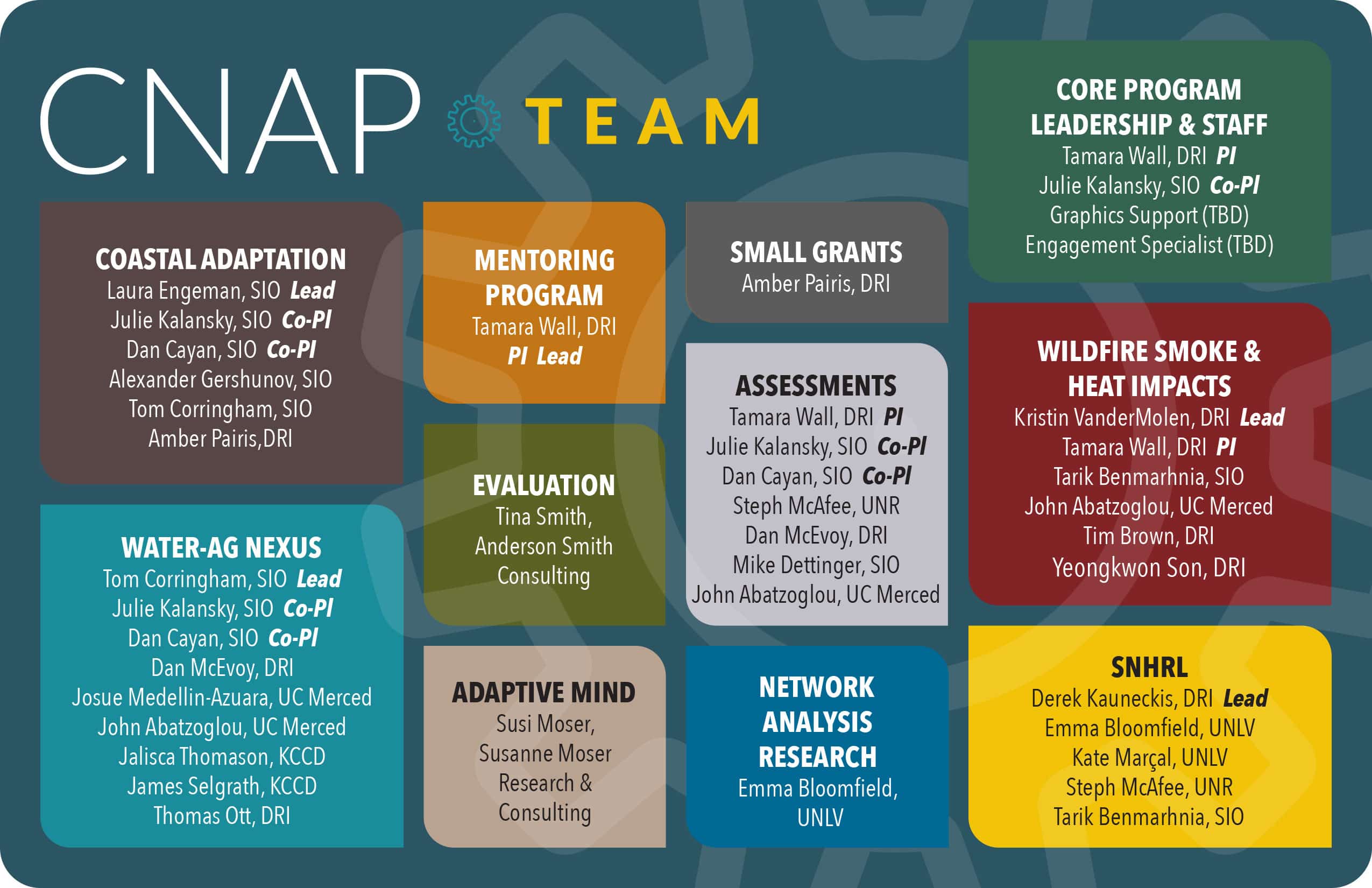 Our proposed next iteration of the CNAP team expands the membership to better address the major climate risks and related adaptation challenges in the region. The revised team includes new research members from the University of Nevada, Las Vegas; the University of Nevada, Reno; the University of California Merced; Anderson Smith Consulting; and Kern Community College District. This expanded team provides expertise in public policy, social work, epidemiology, environmental health, curriculum development, program evaluation, and communications. Each of the six core projects will have a designated lead that will coordinate across the project activities and the core staff and lead/co-PIs will coordinate and ensure collaboration across the team and provide science translation, logistical, and engagement support. 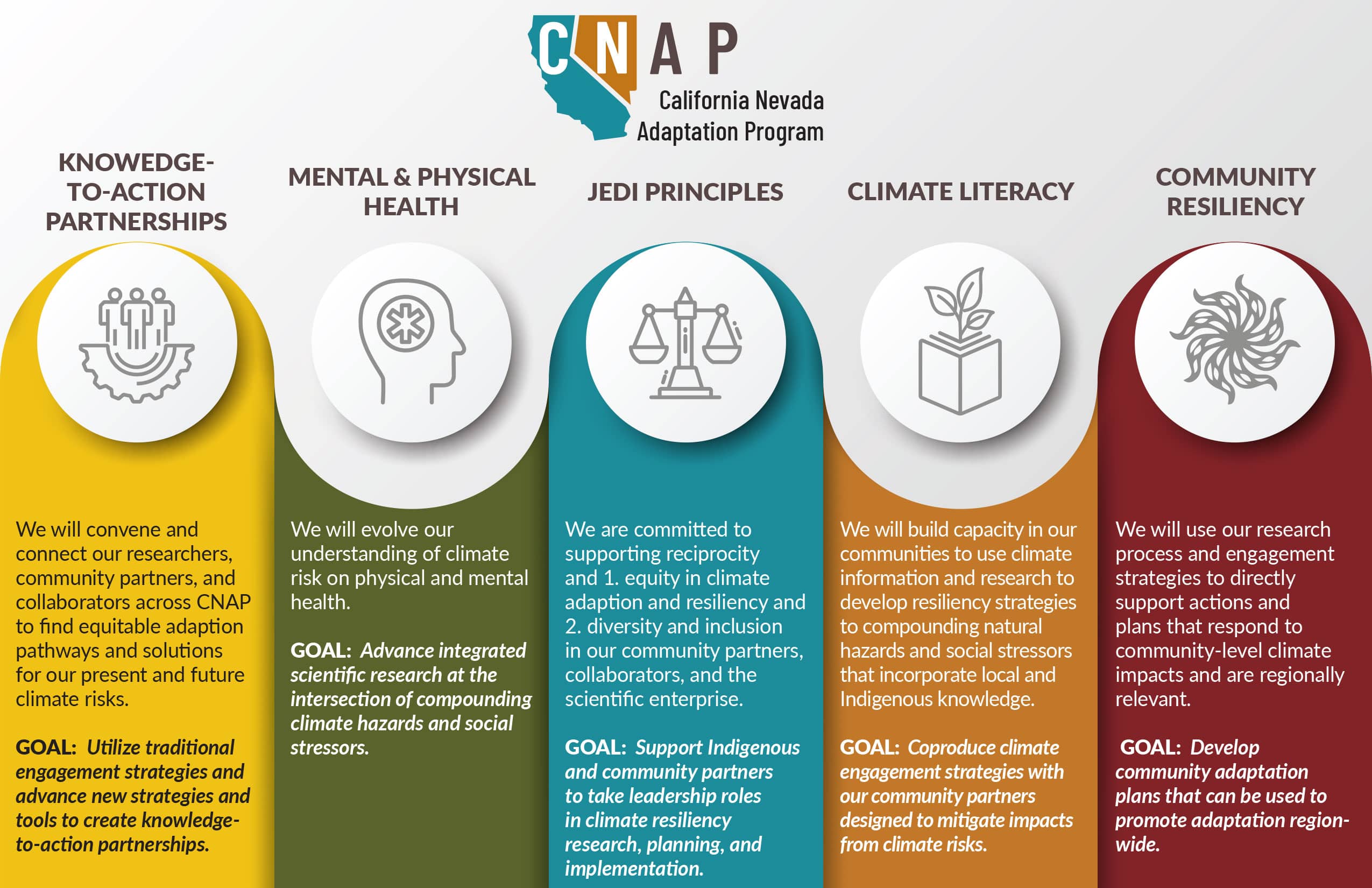 CNAP proposes five tenets to support these overarching goals. These core tenets underpin the key activities, outputs, and outcomes envisioned in this proposal for the next five years.

CNAP, the California Nevada Applications Program RISA team, is providing cutting-edge climate science in its third decade of building regional climate adaptive capacity.  CNAP began in 1999 with an emphasis on seasonal climate variation and forecast interpretation, owing to multifaceted impacts of ENSO in the region.  As climate impacts have escalated over the region, societal needs have rapidly grown.  In response, CNAP’s emphasis has broadened to climate change and short and longer period climate extremes. Major topical thrusts include water resources and hazards, coastal issues, wildfire, human health. Importantly, to better address and understand regional decision maker issues, the team has expanded to integrate social science, including economic evaluation, into its portfolio of expertise.  Among the many projects CNAP has led or contributed to include developing and sustaining the California Climate Vulnerability and Adaptation Assessments, developing the first Nevada Assessment, and providing scientific foundation for quantifying and building awareness of drought, fire risk, extreme heat and sea level rise. CNAP is continuing to evolve with new focus on communities and climate adaptation science.